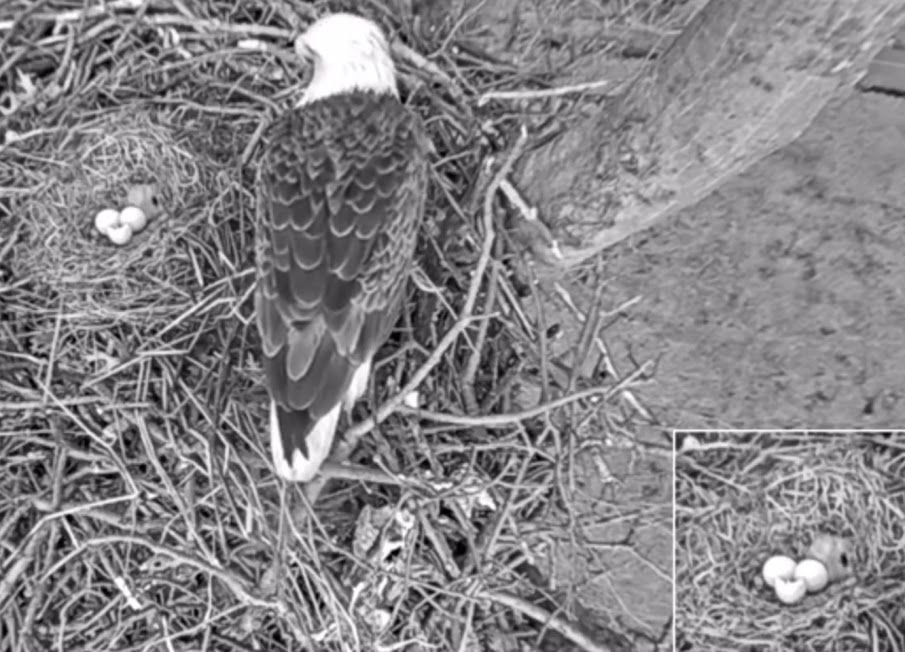 The Redwood eagles, Stars and Stripes, have become parents for the fifth year in a row. The pair’s first egg hatched over the weekend, and two more eaglets are expected soon. 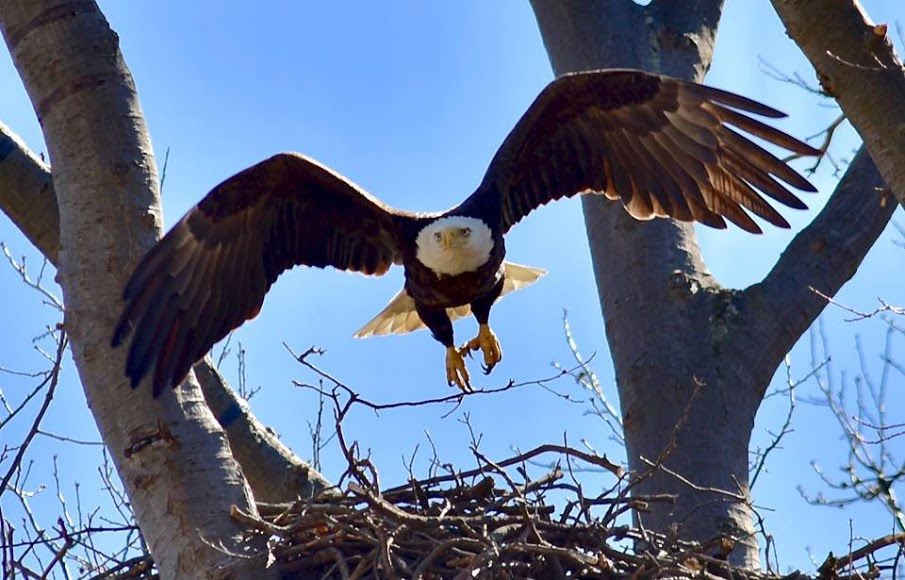 Stripes takes a break from nest duty to go on a hunt.

The Redwood eagles, Stars and Stripes, have become parents for the fifth year in a row. The pair’s first egg hatched over the weekend, and two more eaglets are expected soon.

Stripes takes a break from nest duty to go on a hunt.

AVON LAKE — Avon Lake might be the home of the Shoremen, but the community sure loves its bald eagles. No, not those purple and gold Avon Eagles to the south — the Redwood eagles.

For the fifth year in a row, Stars (female, larger with white leg feathers) and Stripes (male, smaller with brown leg feathers) welcomed a newborn into their 7-foot-wide nest built ina pin oak tree on the grounds of Redwood Elementary School on Redwood Boulevard.

The first of three eggs hatched this past weekend, at about 35 days, and a core group of fans are like proud grandparents, stopping by “the nest” and keeping their computer screens on the Eagle cam.

Since April 4 these Redwood bald eagle aficionados have been on “pip watch,” waiting to catch the first glimpse of a new chick making a crack in an egg in the nest about 80 feet off the ground. This group of about 20 eagle enthusiasts is the information society for the Avon Lake Bald Eagles Nest Facebook page, and most make (at least) daily trips to the school to watch the raptors in action.

One enthusiast is Deanna Mills, who’s been observing the Redwood eagles since the beginning.

Mills, a birder to begin with, remembers the first time she went to the nest. An Ohio Department of Natural Resources representative was there and told her, “You’ll never see a bald eagle nest this close.”

She became a frequent visitor and began meeting other regulars. The group got to know each other, sharing photos, eagle facts and photography tips, and started a Facebook page — Avon Lake Bald Eagles Nest — in late 2016, in honor of Avon Lake’s Redwood eagles.

“We have more than 900 members from all over the U.S. following the page,” Mills said.

Fans from as far away as Florida and Connecticut flock to the nest this time of year to see the birds and their young in action.

When asked why she thinks folks are so interested in the raptors, she said credited the baby boomers.

“I’m a baby boomer,” Mills said. “We were told they’re (eagles) almost extinct. To us it’s unheard of that you could see an eagle in the wild. You are in awe.”

Although Mills moved to northern Michigan in the fall of 2017 for a job transfer, she’s still connected to the group and spends more than 10 hours a week on the Facebook page and eagle cam during nesting season. She returns to Avon Lake four times a year, and even plans her vacation around activity at the nest and meeting other members for dinner.

Speaking of dinner, Mills said the nest is especially busy and full now. Stripes has been “stocking the pantry,” as the fan club calls it, with fish, squirrel and duckling in preparation for the eaglets, who Mills said will “eat nonstop.”

“It’s cool and icky at the same time,” Mills said. “It’s the circle of life.”

The former Avon Lake resident now knows enough about the eagles to look for changes in habits to indicate eggs being laid.

“I’m getting up real early in the morning these days,” Mills said. “It’s something I love. It’s the most majestic thing to see.”

• Clutch – the number of eggs in the nest.

• Pip – the first step in the hatching process, which usually starts with a little hole, and can take 24-48 hours.

• Hatch – the chicks are born.

• Branching – when the eaglets sit on a branch outside the nest. They may also bat their wings during this stage.

History of the Redwood bald eagles

• In November 2014, a pair of bald eagles started building a nest in a pin oak tree about 70 to 80 feet off the ground near Redwood Elementary School’s back parking lot. Students named them Stars (female) and Stripes (male).

• In March 2015, two eggs were laid and in April both eggs hatched. In May, students named the eaglets Hope and Pride. The eaglets branched in June, fledged in July and left the area in mid-August.

• In September 2015, a webcam was installed to observe the eagles: youtube.com/c/AvonLakeEagleCam/live.

• In late February and early March 2016, three eggs were laid. They hatched in early April; two survived. Students named them Liberty and Justice. In June, both eaglets branched and fledged. The young eagles stayed in the area until late August.

• In late November 2016, several of the Redwood eagles’ core group of fans started a Facebook page in honor of Stars and Stripes and their offspring: Avon Lake Bald Eagles.

• In late February and early March 2017, three eggs were laid. Two hatched in early April. The students named them Maroon and Gold. The babies branched and fledged in June and July, and left at the end of August.

• In late February and early March 2018, three eggs were laid, and all three hatched in early April. In May, the students voted to name them Red, White and Blue. In late June, all three eaglets branched and fledged. They were consistently seen until mid-August, and periodically seen into September.

• In late February and early March 2019, there were three eggs again. As of April 5, core members were on pip patrol, with the first hatch April 7.

Want to learn more? Ask to join the Avon Lake Bald Eagles Facebook page (it’s a closed group, but everyone is welcome). The page is dedicated to Stars and Stripes and their offspring, and offers amazing photos and great information about the Redwood eagles — and eagles in general. You can also follow the Redwood eagles live on YouTube at AvonLakeEagleCam.