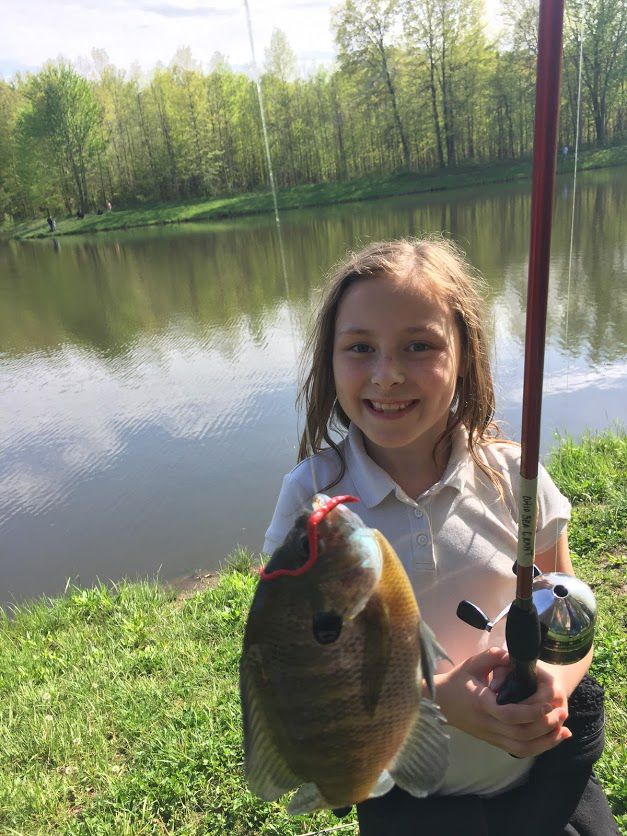 Kelly Dunnigan from Boys and Girls Club of Lorain displays the fish she caught while participating in Footpath Foundation's summer camp. 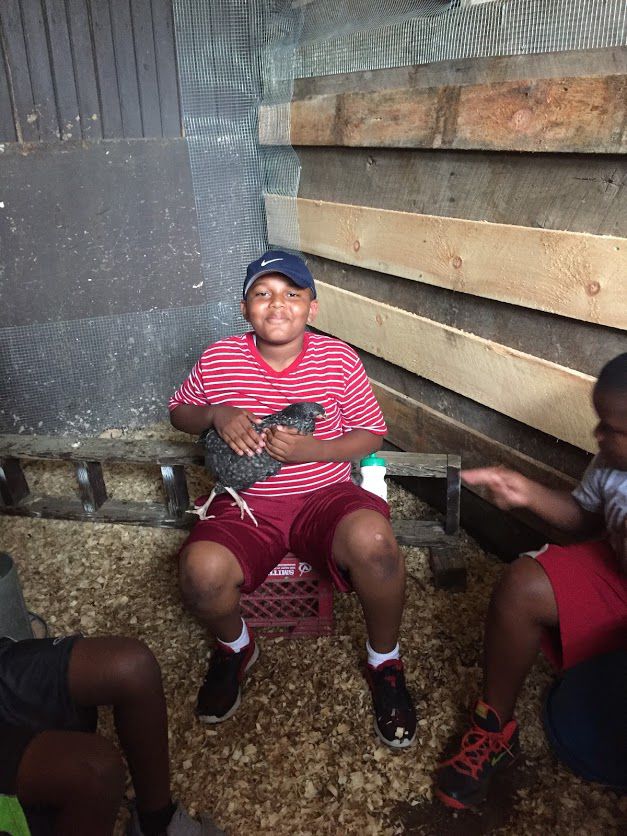 Mar’Aaron Cantie-Oliver saw and held a chicken for the first time as a camper with Footpath Foundation. Mar'Aaron is from Cleveland and belongs to Boys and Girls Clubs of Cleveland. The two nonprofits partner to offer city kids outdoor camping experiences.

Kelly Dunnigan from Boys and Girls Club of Lorain displays the fish she caught while participating in Footpath Foundation's summer camp.

Mar’Aaron Cantie-Oliver saw and held a chicken for the first time as a camper with Footpath Foundation. Mar'Aaron is from Cleveland and belongs to Boys and Girls Clubs of Cleveland. The two nonprofits partner to offer city kids outdoor camping experiences.

WESTLAKE - As a group of 60 camp-bound city kids arrived at their destination, chaperone Mary Macias remembers, the children made noises as bus doors and windows opened. "We were in the middle of the woods and I thought it smelled amazing," she said.

Clearly the kids thought differently. "Was it the horses?" she asked herself.

Then a camper's mom spoke up. "Kids, this is just fresh air you are smelling."

The kids were first-time campers and Macias, a child advocate attorney, was also an enthusiastic volunteer for Bear Hug, a Detroit nonprofit that provided city kids with an outdoor camp experience.

That was nearly 20 years ago. Now the Westlake resident has combined her love of the outdoors and her passion for giving kids opportunities to thrive by founding Footpath Foundation. Since 2016, the foundation has collaborated with Boys and Girls Clubs of Cleveland and Lorain. It sponsored 42 kids the first summer and, this summer, will sponsor 140, funded totally by private donations from individuals and businesses.

Macias said many urban kids never get beyond a 5-mile radius of their homes, partly due to lack of family resources. "We witnessed how amazing the experience was for these kids," she said. “It changes them. They have a better perspective of the world around them."

To prove her point, she shared stories. Following his first — and successful — attempt at archery, a young boy turned to her and said, "Now I know I'm good at something." He told Macias he was not good at basketball, a popular sport at school and in his neighborhood. "He may never shoot a bow and arrow again," she said, "but he'll remember this for all his life."

She also recounted another camper's wonder as they walked in the woods, "How did you get so many trees in one place?"

Macias finds great satisfaction taking kids fishing, canoeing, swimming in a lake or hiking in the woods for the first time. "I know how being outside makes me feel instantly calmer, less stressed and overall better." Macias would like every child to experience nature, believing it builds resilience.

Kids served by Footpath Foundation range in age from 9 to 16 and come from urban communities where there is less opportunity to attend an outdoor camp, she said. Kids are divided by age groups for camps that run four days and three nights. Sessions are run over a three-week period. Footpath uses Camp Whitewood in Ashtabula County or Camp Joy in Clinton County.

Macias serves as president and is assisted by a part-time program director who has a master's degree in environmental science and worked at an inner-city private school. Five instructors and a host of volunteers help with programs.

During the fall and spring, Footpath also offers six- or eight-week after-school programs. Participants from Cuyahoga and Lorain counties take part in outdoor field experiences. Macias admires the staff's flexibility to meet kids' needs. "If the plan is to go birdwatching, but no birds can be found, instructors can quickly shift to a different lesson so kids remain engaged." She said the curriculum is designed to teach elements of STEM, given the plethora of science opportunities found outdoors, as well as a lesson in personal development. For example, patience is tied to fishing while mindfulness is built into the lesson on hiking.

Footpath took on a special project to sponsor girls in foster care for equestrian therapy at Achievement Center's Camp Cheerful in Strongsville.

"We're beginning to hit our stride," Macias said. With a few years under their belts, she said foundations are showing interest in providing grants. Nonprofits are calling to inquire about how their kids can become involved.

Her goal is to continue to give experiences to children who wouldn’t have them otherwise. "It is a way to help level their playing fields."

Information about the organization can be found at footpathfoundation.org