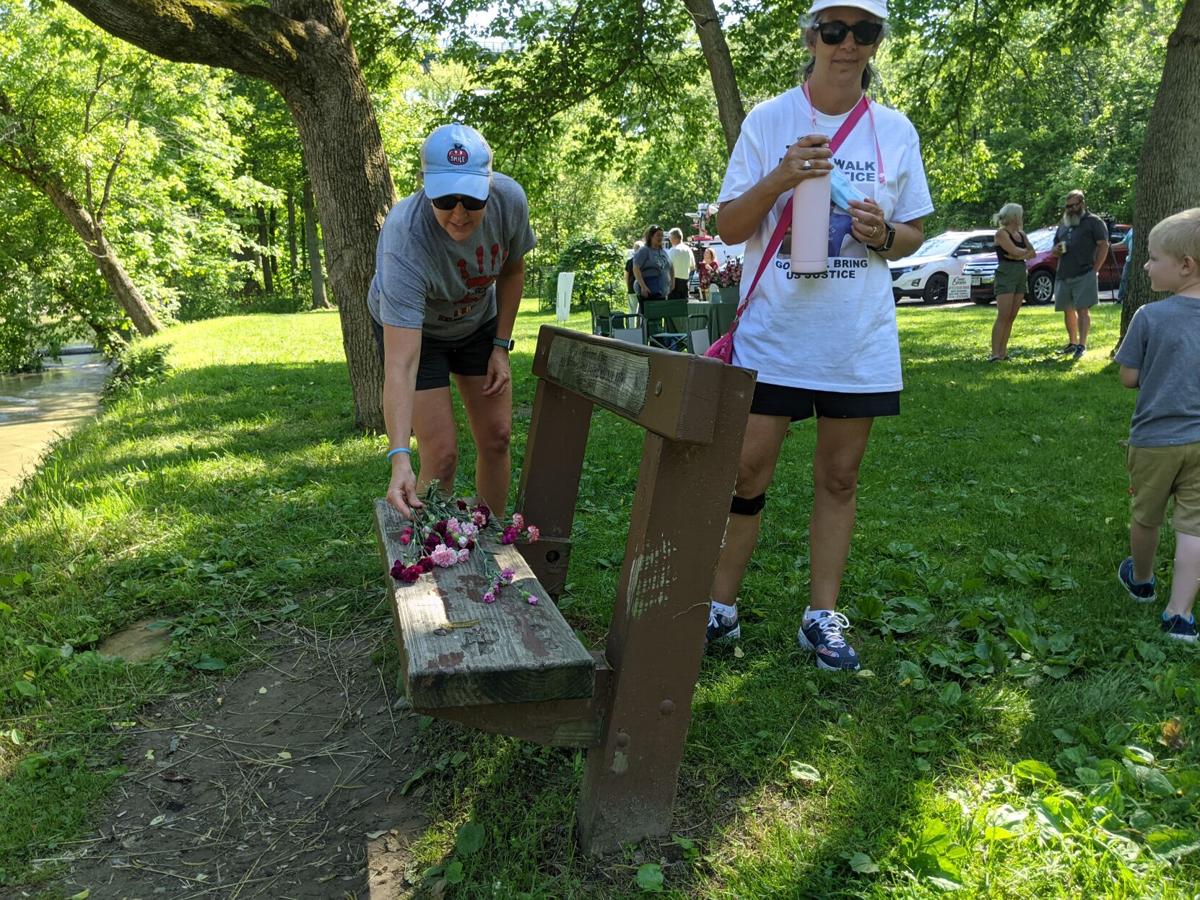 Julie Davidson and Karen Brown lay carnations on the bench where their friend Carnell Sledge was murdered. 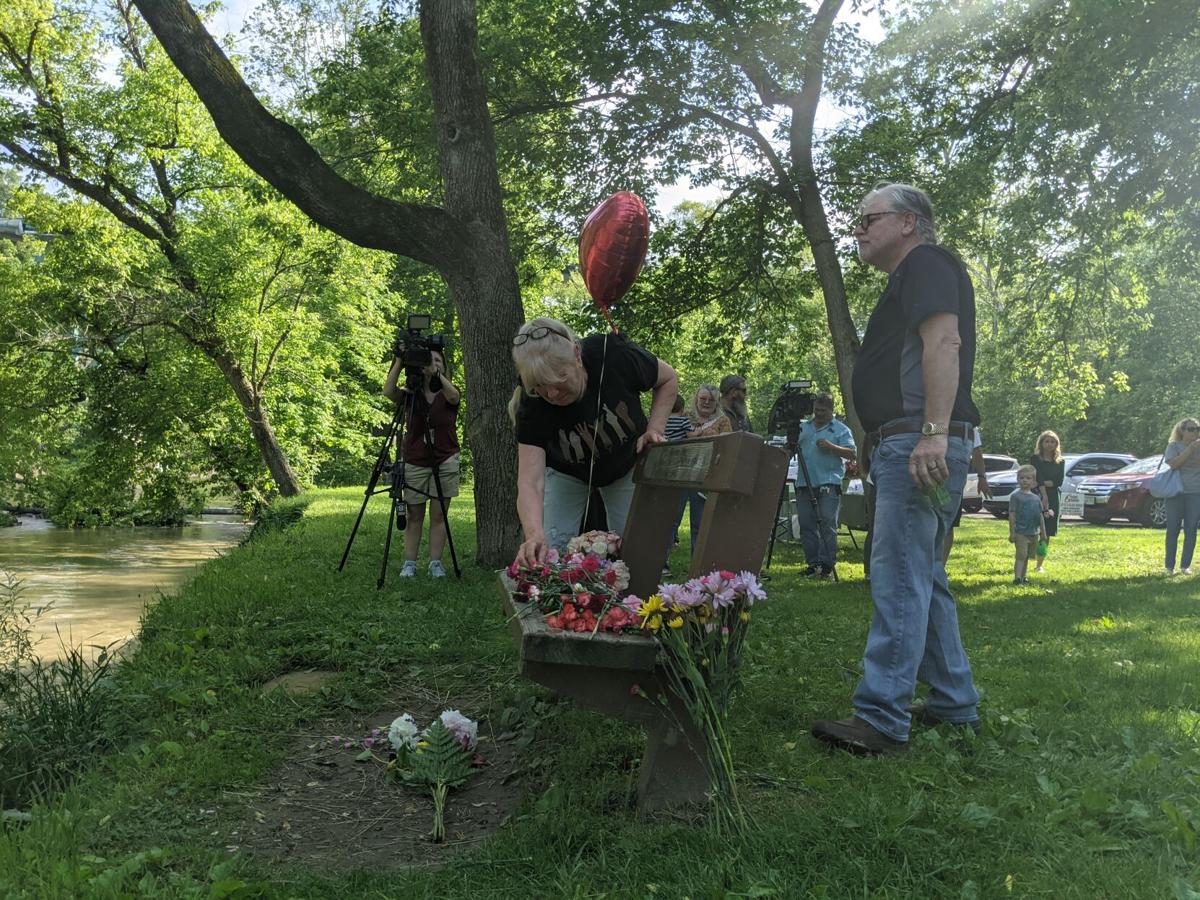 Kim Brown lays a carnation where her daughter Kate was murdered on June 4 2019, she urges anyone with information to call and leave an anonymous tip to solve her daughter’s case. 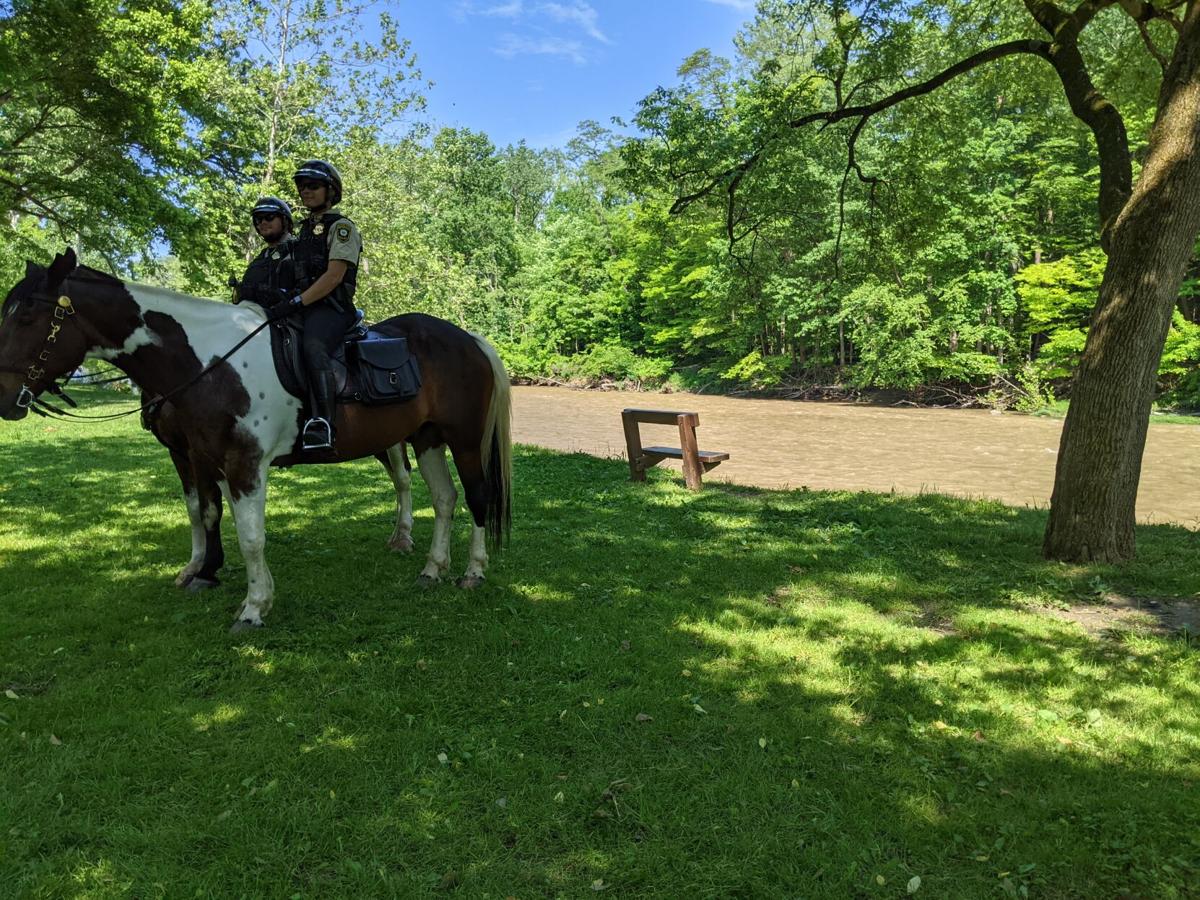 The bench where Carnell Sledge and Kate Brown were murdered on June 4 2019. Police were at the site prior to the memorial for anyone to stop and give information regarding the case. 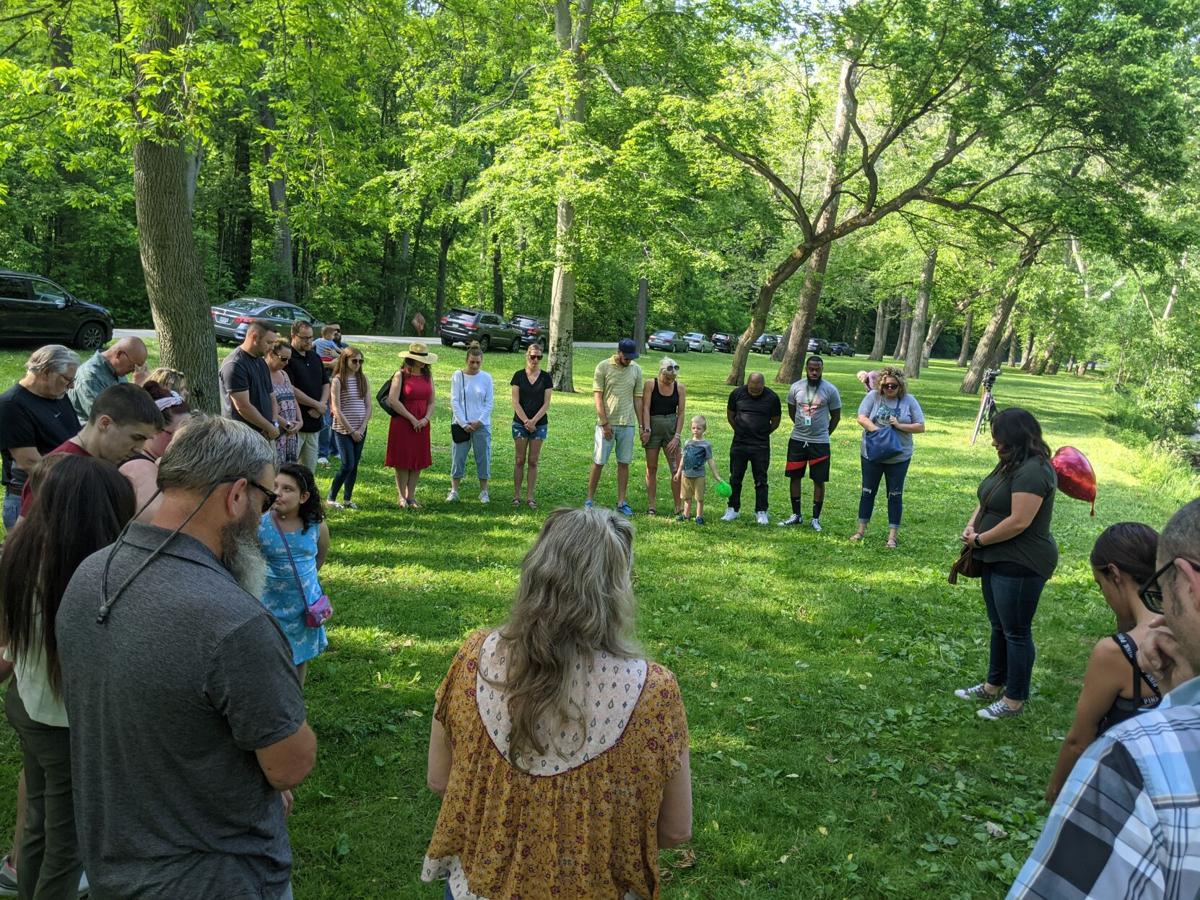 There was a moment of silence for Kate Brown and Carnell Sledge at the memorial, attendees stood in a half-circle facing the bench where the two were murdered.

Julie Davidson and Karen Brown lay carnations on the bench where their friend Carnell Sledge was murdered.

Kim Brown lays a carnation where her daughter Kate was murdered on June 4 2019, she urges anyone with information to call and leave an anonymous tip to solve her daughter’s case.

The bench where Carnell Sledge and Kate Brown were murdered on June 4 2019. Police were at the site prior to the memorial for anyone to stop and give information regarding the case.

There was a moment of silence for Kate Brown and Carnell Sledge at the memorial, attendees stood in a half-circle facing the bench where the two were murdered.

On June 4, 2019, less than 10 minutes after arriving at a picturesque spot below the Lorain Avenue Bridge in the Cleveland Metroparks Rocky River Reservation, Carnell Sledge and Kate Brown were dead, shot in the head and back by a still-unknown assailant.

On Friday, two years to the day of their deaths, their family and friends returned to the site to revive attention to the case, as well as announce a $100,000 reward for information leading to its solving.

The scene on the sunny, warm afternoon — the same weather as two years ago — was somber as the victims’ loved ones and law enforcement gathered on the banks of the Rocky River, near the bench where Sledge, 40, of North Olmsted, and Brown, 33, of Fairview Park, had been sitting. Their bodies were found by kayakers near the river north of the Lorain Road Bridge. Authorities believe Brown and Sledge arrived around 5:04 p.m. Police say they were shot between 5:08 to 5:15 p.m.

The two were longtime friends, Sledge had been a special education specialist in the Westlake School District from September 2013 to 2018. Brown worked at a local jewelry company for seven years.

Metroparks Police, in partnership with the FBI, stated they’ve conducted nearly 200 interviews about the case. But they have released almost nothing about what they have on the case, and removed all signs around the site requesting information and noting the reward. West Life has repeatedly called asking for updates and have received no information, simply statements that the deaths were still being investigated.

Jeff Tolman, communications manager for the Cleveland Metroparks, said the parks, Crime Stoppers and the FBI are continuing to raise awareness to find information about the case. Anyone with information is asked to call Crime Stoppers at 216-25crime and can remain anonymous with their tips..

“This remains an open investigation and Cleveland Metroparks Police and law enforcement partners have followed up on over 100 tips and conducted over 200 interviews through the course of the investigation over the past two years,” Tolman said.

Metroparks officials took down in spring 2020 the series of signs at the site announcing the reward and asking for tips. Two months ago, family and friends put up new signs at the site. Metroparks immediately removed them, too, telling the family the signs violated park rules on signs. The FBI and city of Fairview Park have stepped in and put up a series of billboards along highways and near the entrance to the park asking for tips and announcing the $100,000 reward for information leading to the identity and prosecution of the perpetrators.

On Friday, representatives from Crime Stoppers sat throughout the afternoon near the bench, for people to share any tips.

McFalls and Rozar said Carnell and Sledge died on a day just like Friday, 80 degrees, traffic flowing, bikers and walkers out enjoying the park.

“We're hoping today in our continued efforts, you know, around it will just encourage whoever may have seen something however small to speak,” Rozar said. “Two years is a long time to wait for this family that's already just dealing with grief, much less an open-ended case.”

Julie Davidson and Karen Jones, friends of Sledge, laid carnations at the site. The women worked with Sledge at Westlake schools. Sledge had been a special education specialist in the Westlake School District from September 2013 to 2018.

“Just trying to get closure for the family,” Davidson said. “This isn't over just because this (already) happened, we're going to continue to do all this for awareness because if we don't, it’s going to get slid under the rug.”

Kim and Tom Brown, Kate’s parents, are depending on the public to come forward with any information to solve the murder of their daughter.

“We put signs up in Fairview Park seeing that we're not allowed to put signs out in the park anymore,” Tom Brown said at the gathering. “The city of Fairview Park was kind enough to let us put signs up at a few entrances to the park, that's been great because I think those I have heard today, a tip or two have come in from those signs.”

The family hopes through events like the memorial, someone will know something and come forward to share that information.

“Just making people aware that this guy or this person who did this is still out there, he's still out there eating breakfast next to you or your wife or your kid, and that can't be that this has to come to an end,” Brown said. “We're hoping we're going to get close with a tip and eventually an arrest and get a conviction.”

Since Kate’s death, the family appreciates every day together, but while appreciating their four grandkids and the closeness they miss their daughter.

“The grandkids were close to Kate, they called her ‘TT’ and ‘Mr. Ray’ from Finding Nemo, they idolized her,” Brown said.

The Browns are hoping for any information, any kind of tip to nudge the investigation in a direction that leads to an arrest.

“There is a $100,000 reward, and we're just hoping that by stimulating the public's interest, someone might come forward,” Kim Brown said.

The memorial included two minutes of silence for the two, as carnations, balloons and bouquets were laid on the bench where they lost their lives.

Captain Richard McIntosh of the Sheriff's Department said they want the public to remember this case and share information.

“We want to remind the public that the family misses these two children. We want to solve this case, we don't want the public to forget about it, there may be someone out there who knows something that has never reported it to the police,” McIntosh said.

McIntosh said everyone is a suspect in this case, while there have been developments nothing has been concrete enough to make an arrest.

“If you're the shooter, you don't want to have to be looking over your shoulder for the rest of your life, your lawyer, turn yourself in,” he said. “Let's resolve this case.”

Anyone with information regarding this case is urged to contact Crime Stoppers at 216-252-7463.