Nick Zangas stands in front of his then freshly painted replica of Charles Lindbergh’s Spirit of St. Louis that became iconic in Avon Lake, sitting in front of a local service station for approximately 70 years. 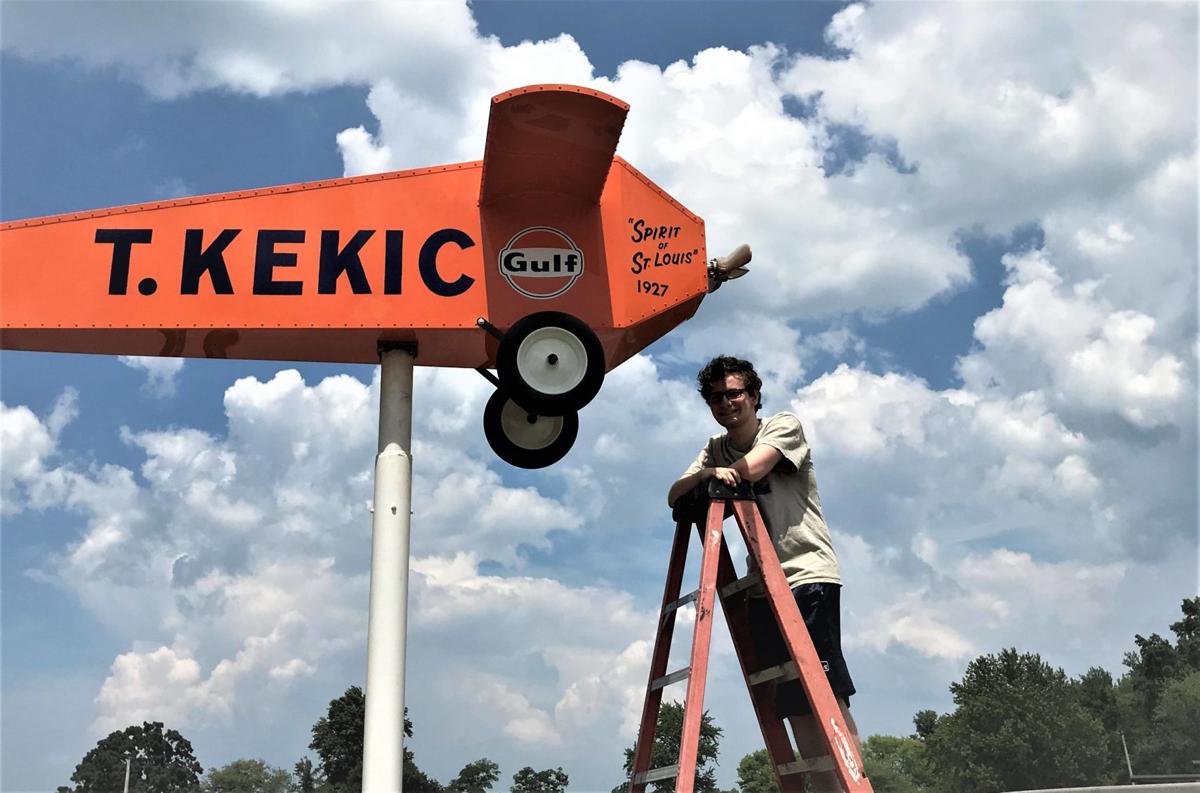 Nick Zangas poses with the completed replica of Lindbergh’s the Spirit of 76.

Only the propeller is missing at this point from Nick Zangas’s spirit of St. Louis replica. 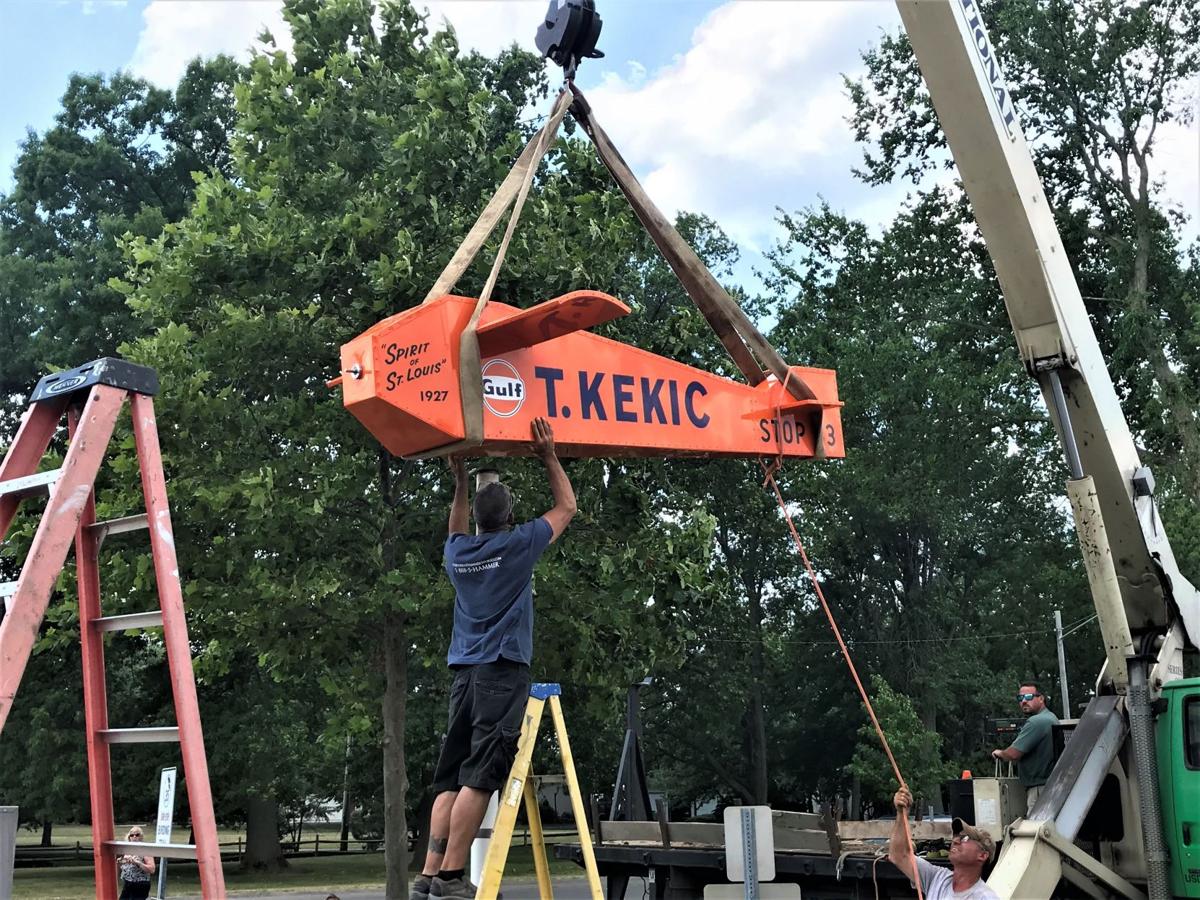 Nick Zangas stands in front of his then freshly painted replica of Charles Lindbergh’s Spirit of St. Louis that became iconic in Avon Lake, sitting in front of a local service station for approximately 70 years.

Nick Zangas poses with the completed replica of Lindbergh’s the Spirit of 76.

Only the propeller is missing at this point from Nick Zangas’s spirit of St. Louis replica.

After a year of research and hard work, a replica of an airplane weathervane that was a landmark for nearly 70 years at a Lake Road gas station is once again flying high, this time in Miller Road Park.

Nick Zangas, a member of Avon Lake Scout Troop 338 on June 10 completed and installed via a crane the 3-by-12-foot-sign in the shape of Charles Lindbergh's famous airplane “Spirit of St. Louis.”

The airplane used to blow in the wind and turn around in front of the T. Kekic gas station on Lake Road near the Bay Village border owned by Ted Kekic.

The 17-year-old senior at St. Edward High School in Lakewood, is proud of finishing his project, said his father, John Zangas, the troop’s Scoutmaster.

The weathervane has a wooden frame and is wrapped in sheet metal.

The original weathervane dates to the late 1920s, soon after pioneer aviator Charles Lindbergh completed his solo trans-Atlantic flight. The replica sat atop a 14-foot-high pole. It stood outside the T. Kekic gas station on the south side of Lake Road near the Bay Village border. The station was open from 1918 to the early 1990s. It was a stopping point for motorists who needed directions or wanted to socialize.

The Coca-Cola Co. produced 145 small-scale replicas — weather vanes, actually — of Lindbergh’s plane to honor the aviator and as advertising for the Cleveland-based Canfield Oil Co.’s gas stations. The replicas were placed at Canfield stations throughout Ohio.

The replica plane at Kekic’s shop had a propeller and turned in the wind. Local legend said it was stolen sometime in the mid-1990s, which is about the time the station was demolished, Nick said. The Avon Lake plane was the last known survivor among the Spirit of St. Louis replicas. Ted Kekic’s descendants recently told Tony Tomanek of the Avon Lake historical society that the plane was not stolen but sold to a collector when the service station was razed. The Kekic family does not know the plane’s current location — if it still exists. A private residence is on the site of the former service station.

Efforts to replace the replica have been ongoing for about three years, Tomanek said. Both he and Nick talked about the historical society reaching out to the would-be Eagle Scout about taking on the project. Nick readily agreed partly because he needed a project and partly because of an interest in aeronautics. He plans to major in aerospace engineering in college.

Nick insists, however, his interest in the Lindbergh replica had little to do with the plane itself. A desire to connect with his hometown’s past and taking on the hardest project he could find is what really grabbed his attention, he said.

Nick used photos of the original provided by the historical society for accuracy. The recreation started as a wooden model. Avon Lake firm Northern HammerWorks covered the wooden frame with sheet metal. The company also attached a propeller, one of the last tasks to complete the project.

The reproduction has “Stop 43” painted on the tail with “T. Kekic” in all capital letters on the plane’s fuselage.

In addition to HammerWorks, Avon Lake Sheet Metal (which donated the materials used by HammerWorks) and Grassa’s Body Repair, LTD, of Avon (which painted the plane), are among local businesses helping with the project, said John Zangas. The total value of donated materials and time put into the replica probably adds up to about $10,000, he added. Nick arranged for those donations almost entirely on his own, his father said.

“It’s been pretty amazing,” Nick said of the various donations. In addition to securing that help, Nick needed to gain the permission of Avon Lake City Council to place the sign in the municipal lakefront park. The final vote was 6-1.

“I think people want to see the plane come back,” Nick said.

The replica is 8- to 10-feet long with a roughly 6-foot wingspan. Cementing in place a pole to support the plane was the last big step needed before the arrival of the reproduction.

“It all kind of came together quickly,” John Zangas said.

Nick is still at work on a plaque telling the replica plane’s story. The plaque will eventually be placed on a stone near the replica. The plaque is complete but Nick needs to find a company willing to attach it to the selected stone.

The Avon Lake Historical Society planned a dedication for the replica Aug. 15. Those plans may or may not be on hold because of the recent surge in COVID-19 cases throughout Lorain County. Organizers want to see what the pandemic situation is next month before making any final plans.

Nick’s father, an Eagle Scout himself, talked him into trying for scouting’s highest honor, although the son added he didn’t need a lot of convincing.

“My dad told me if you don’t do it, it will end up being something you regret not doing,” Nick said.

The elder Zangas’ Eagle Scout project was doing a door-to-door food donation drive in his native St. Louis. The tradition continues to this day, Zangas said.