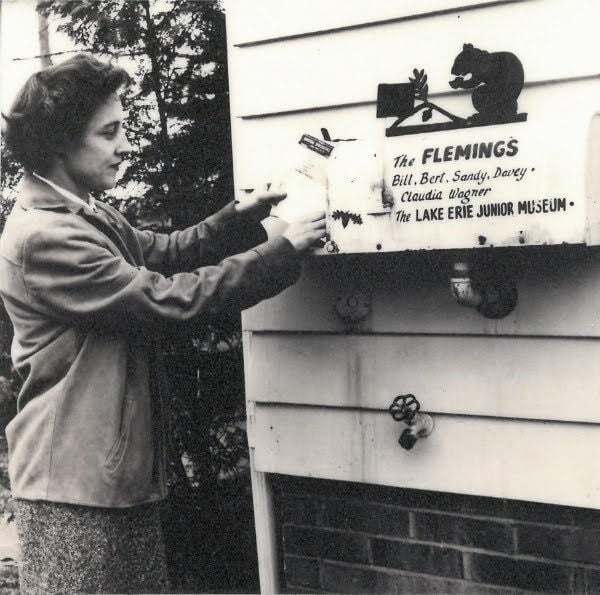 Elberta Fleming began the Lake Erie Nature & Science Center from her home, where she used her own collection of animals. 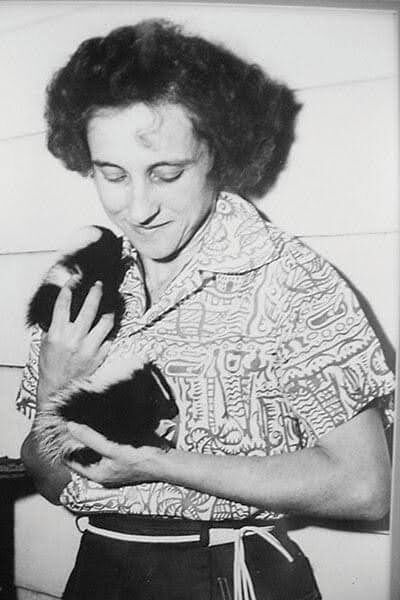 Fleming wanted to connect people to the world around them, especially children who were curious about nature.

Elberta Fleming began the Lake Erie Nature & Science Center from her home, where she used her own collection of animals.

Fleming wanted to connect people to the world around them, especially children who were curious about nature.

Madeleine “Mady” Deter remembers her interest in nature beginning as a girl who started catching garter snakes because she was sick of the boys in the neighborhood chasing her with them.

Deter became involved with the Lake Erie Nature & Science Center as an adult. She joined its Women’s Board, worked at the gift shop and brought animals out and about to visit community members.

The center, nestled in the Huntington Reservation, was unable to celebrate its 75th anniversary in 2020 due to the COVID-19 pandemic, but it has returned to nearly normal operations.

Deter has been on the Women’s Board for more than 50 years. “I think just learning more about the environment and trying to encourage people to learn about the world in which we live has kept my interest up,” she said during a recent interview.

Deter, sitting next to Women’s Board President Karen Huhndorff, had an old article about the center in front of her while Huhndorff had a small notebook detailing the history of the Women’s Board.

As the women spoke, children were just outside the doors, calling out to parents while a pollinator exhibit provides an inside look at a beehive.

The Women’s Board is intrinsically tied to the center’s history, starting with Elberta Fleming, the nature center’s founder.

“We started with the idea for raising money for the nature center through various fundraisers,” Deter said. “When we initially started, though, we had to work the gift shop a certain number of hours every week and we learned about the programs (and) the animals and greeted visitors.”

Those experiences helped the women communicate to the public what was going on around the center.

Fleming started the “Junior Museum” in 1945. She ran education programs for Bay Village children from her home, but she wanted to grow beyond that.

“Elberta gathered around herself a lot of mothers in the community to help her with the programs,” said center Executive Director Catherine Timko. “She was really trying to grow this organization, so the Women's Board was just absolutely critical in those early days.”

The original Women’s Board was six of Fleming’s friends who helped grow the museum financially through fundraisers and service opportunities and by raising community awareness.

The board, which once had 50 members, now is composed of 20 women, Huhndorff said.

“It’s a unique group of energetic and enthusiastic women with high hopes for the future,” she said. “Whenever solicited, these women would foster and develop public interest in the center’s cultural and educational programs.”

Board members still volunteer at the center, working as greeters near the entranceway.

The board has run a number of fundraisers over the years, including cultural festivals, craft shows, a home and garden tour, and the Christmas Carousel.

Huhndorff brought her children to the center when they were young and first got involved in 1983. She attended a new members' tea and from there began her work. She volunteers as a greeter for the center.

“There was a log in the front entryway that we’ve removed due to the difficulty of cleaning it and I get asked by kids all the time where it went,” Huhndorff said. “I tell them the log is in quarantine.”

The center is a nonprofit organization independently and privately funded by donations, grants and program fees. The center runs preschool programs, wildlife rehabilitation and release, and wildlife exhibits.

Christine Barnett, wildlife program specialist, said the most important part of the rehabilitation program is the release of wildlife. The wildlife exhibits on display have non-releasable animals due to treatment, injuries or other issues. Animals undergoing rehabilitation are not on view.

“We’re involved in Lights Out Cleveland, a program designed to monitor the light pollution in Cleveland and encourage buildings to turn off their bright lights during migration season,” Barnett said.

The center’s involvement with the program usually brings an influx of birds to the rehab center. The release rate of birds from this program is 95%. From July 1, 2019, to June 30, 2020, the center picked up 2,606 through Lights Out Cleveland. Throughout the year, around 400 animals come to the center besides birds, Timko said.

This past year the center saw an uptick of phone calls as more people were outside exploring nature. The nonprofit is looking into fundraisers, but as the Delta variant surges through the country, the fundraisers are expected to be postponed until 2022.

“It's not a responsible thing for us to do this fall,” Timko said.

Fall programs are still scheduled, but they have been adapted for the safety of visitors. The center requires masks for its staff, but visitors are strongly encouraged to wear them.

Fall programs have varying focuses. Some are planetarium-based, such as Telescope Nights, Twinkle Tots and Stellar Stars. Other programs dive into nature, such as Nature Nuts, where children walk along one of the center’s trails. One program already beginning to sell out is the Pawpaw Pollinator program looking into the native Ohio fruit.

The full calendar of programs offered by the center can be found at https://www.lensc.org/visit/program-calendar/.

Huhndorff said the internet has been instrumental in bringing awareness to the center and everything it has to offer.

“The people here make the biggest difference,” Huhndorff said. “The facility is here, but they are inside and they offer such wonderful support for the center.”

The center reopened as soon as possible following the pandemic, Timko said. It has resumed nearly all of the programs it offered before the pandemic and adapted as needed for the future.

Timko credits the success to the synergy of the community and the center’s workers, including board members and other volunteers.

“It’s really the endurance of the mission. It’s a timeless mission. People are always going to want to learn about the world around them,” Timko said. “Teaching people about the world and connecting them to animals and to their surroundings is really timeless.”