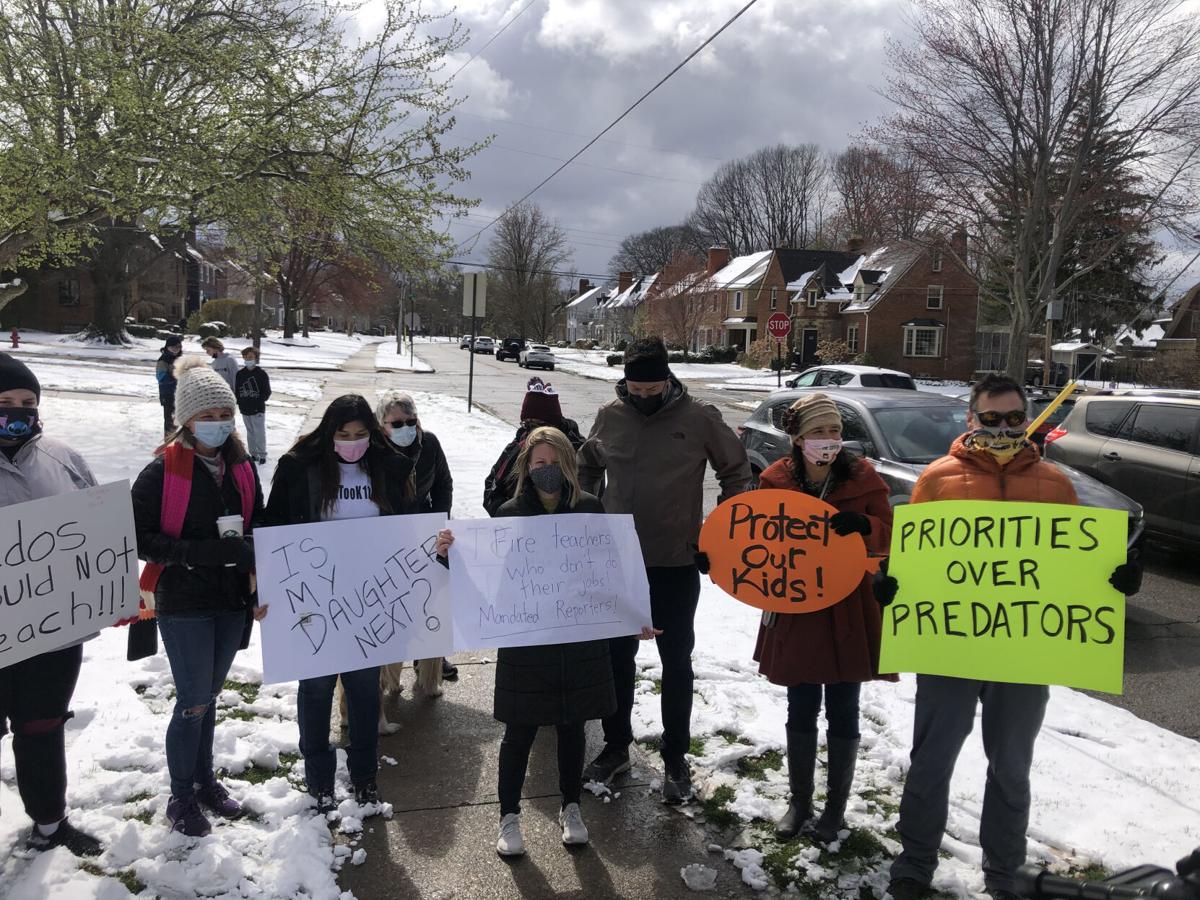 Concerned parents and students gathered Thursday in front of the Rocky River Board of Education offices, 1101 Morewood Parkway, to voice their concerns over what they consider a lack of transparency by the school district and its investigation of six teachers accused of making inappropriate comments about a teenage girl. 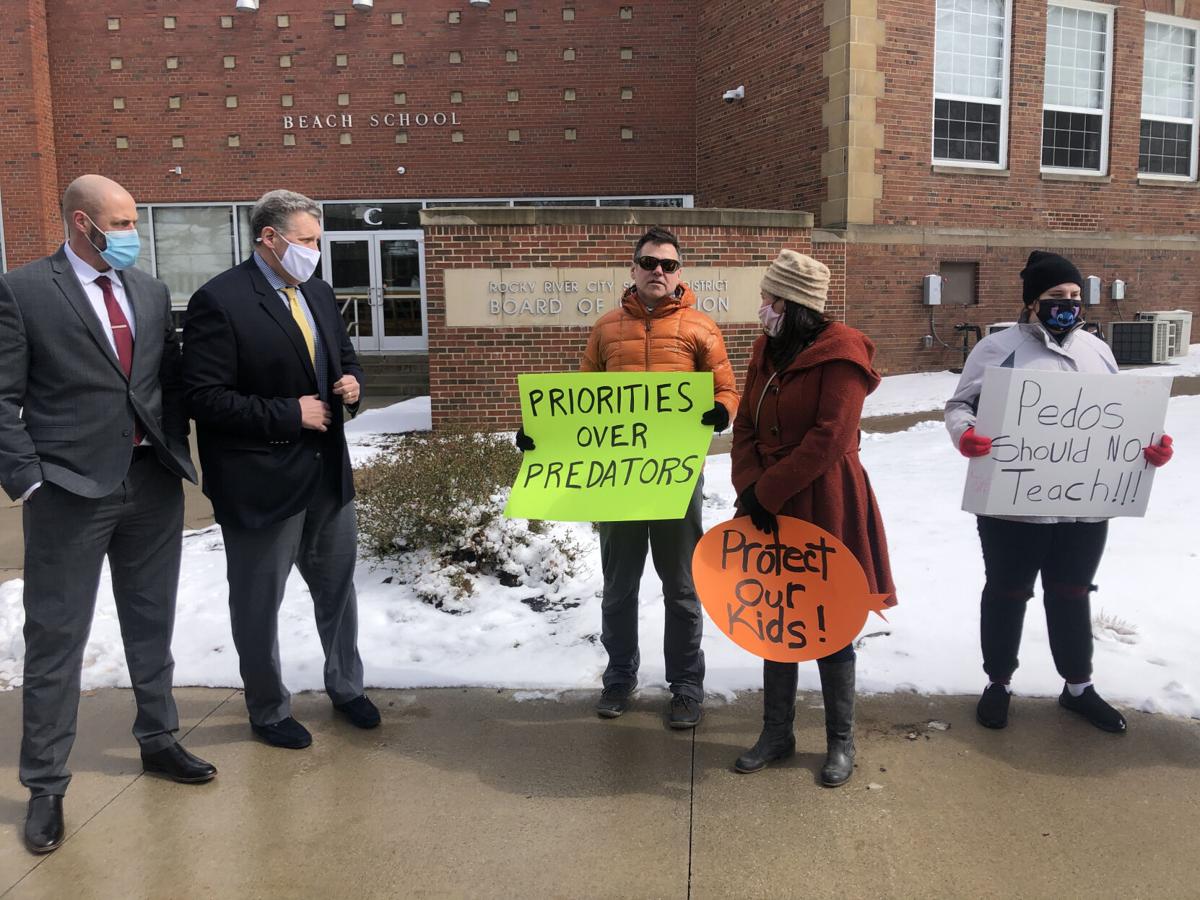 Superintendent Michael Shoaf met with demonstrators Thursday to discuss an ongoing investigation of six teachers accused of making inappropriate comments about a teenage girl. While he couldn’t give any new details of the investigation, he announced a third one will be conducted by the Ohio Department of Education.

Concerned parents and students gathered Thursday in front of the Rocky River Board of Education offices, 1101 Morewood Parkway, to voice their concerns over what they consider a lack of transparency by the school district and its investigation of six teachers accused of making inappropriate comments about a teenage girl.

Superintendent Michael Shoaf met with demonstrators Thursday to discuss an ongoing investigation of six teachers accused of making inappropriate comments about a teenage girl. While he couldn’t give any new details of the investigation, he announced a third one will be conducted by the Ohio Department of Education.

A legal dispute between the Rocky River School District and the Rocky River Police Department over evidence related to a criminal investigation into five teachers will be resolved by the end of the week.

Rocky River Municipal Court Judge Donna Congeni Fitzsimmons has ordered attorneys representing the city, district and the teachers to figure out what information can be used in the city’s criminal investigation. If the parties don’t come to an agreement by Thursday, the matter will be resolved in court beginning at 11:30 a.m. Friday, according to court documents.

“There are some competing interests between the school, the teachers and the city,” Rocky River Law Director Andy Bemer said. “What we’re trying to do is figure out what information can be provided to us without infringing on these teachers’ constitutional rights.”

As a result of the ongoing legal matter, the city’s investigation has been delayed by at least a week, Bemer said.

The police department recently reopened its investigation into six teachers accused of inappropriately talking about a student. Bemer says the department reopened the case after new evidence came to light last month.

Bemer said the city narrowed the scope of its investigation to just five of the six accused teachers. It is unclear why the sixth teacher was dropped from the investigation.

Rocky River Detective Tracey Hill requested the personnel files of the accused teachers, the video and audio recordings of any interviews with the teachers and copies of all text or email communications from any district official or employee about the teachers, according to a subpoena issued March 29.

However, Baasten, McKinley & Co., the labor and employment law firm representing the teachers, filed a motion to quash the subpoenas on April 1. The firm argues that the subpoenas exceed the scope of the police department's investigation and what is permitted in the Ohio Revised Code. It further claims that since there is no evidence a crime has been committed, police cannot subpoena this information.

The motion also states that subpoenas can be quashed if complying with them would be considered unreasonable or oppressive. It states that due to employee Garrity rights, statements compelled by an employer cannot be used in a criminal investigation. This is because employees have the right to avoid incriminating themselves.

Baasten, McKinley & Co. also accuses the district of forcing the accused teachers to hand over personal texts or risk termination.

In a statement given to West Life by the school district, the administration believes their actions during their investigation have been justified, saying:

“The Rocky River School District stands behind our actions as we have always had students’ safety and well-being at the center of our actions while adhering to board policy.”

Meanwhile, Superintendent Michael Shoaf announced Thursday that there will be a third investigation into the incident. Once the district’s investigation is completed, Shoaf plans to send its findings to the Ohio Department of Education, which will look into it.

The district has held two executive session meetings to discuss the matter. A third was scheduled for Tuesday.

“We stand beside our parents and we stand with them,” Shoaf said. “As soon as a decision is made, we will let our parents know.”

The same day as Shoaf’s announcement, a group of nine parents and former students gathered at the district’s offices to voice their concerns about the investigation. The group began its demonstration at 3 p.m., holding signs saying “Priorities over predators,” and “Is my daughter going to be next?” The demonstration went on until 4 p.m.

One demonstrator, Abigail Pepp, a 2020 graduate of Rocky River High School, said she had classes with three of the six teachers accused of making inappropriate comments. She says she’s experienced multiple uncomfortable situations with one of the three.

“I remember one time the teacher called the only Indian student in the class a terrorist,” she said. “It’s upsetting that after multiple complaints involving racism and sexism, the district still hasn’t done anything about it.”

West Life is not publishing the teachers’ names because criminal charges have not been filed.

The controversy started in early March when a video inadvertently recorded at the end of a Zoom class was sent out. It showed two teachers from the high school talking about a text thread by a third teacher. The two teachers thought it might contain an inappropriate picture of a female student, which turned out to be a false assumption.

The picture in question turned out to be an altered picture of actress Barbara Billingsley, who played June Cleaver in the sitcom “Leave It To Beaver,” with her skirt lifted up inappropriately, according to the police detective who led the investigation.

Initially, the police department cleared the six teachers of any criminal activity. However, on March 29, the department reopened the criminal investigation after receiving new information the previous weekend, Police Chief George Lichman said.

The six teachers remain on paid administrative leave. They are accused of violating several school and state policies, including professional behavior standards, relationships with students, breaking student confidentiality, and inappropriate use of technology. Criminal acts were not listed in the violations, according to the district.

Rally organizer April LaRow believes that the district’s decision could cause a rift in the high school.

“If they allow these teachers to keep teaching, no one would be willing to take their classes,” LaRow said. “Parents and students alike are scared of the precedent this could set.”