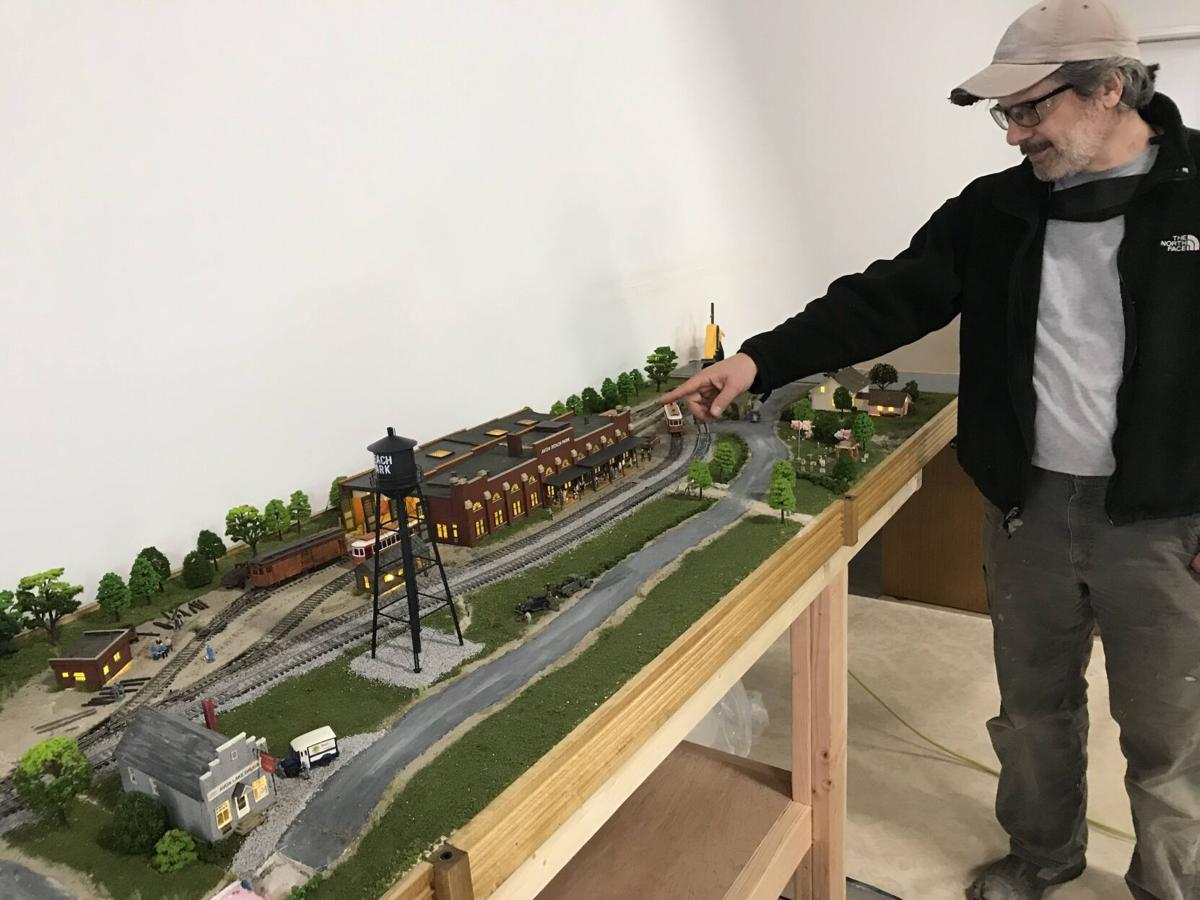 Tom Cucuzza used any source he could find, including a historical society book on the Lake Shore Electric Railway, to help ensure the accuracy of his train layout. 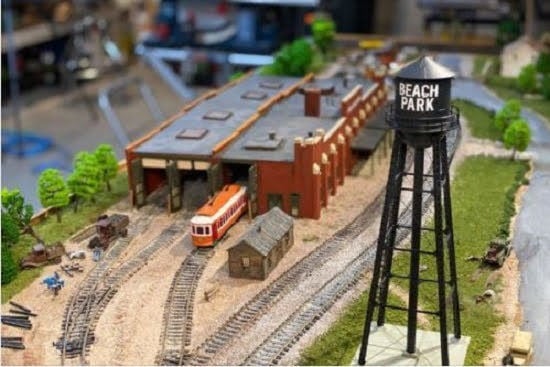 A close-up of Cucuzza’s model. The water tower is long gone, but the building shown, formerly the terminal for Stop 65 on the Lake Shore Electric Railway, is now part of the Beach Park Station shopping plaza.

Tom Cucuzza used any source he could find, including a historical society book on the Lake Shore Electric Railway, to help ensure the accuracy of his train layout.

A close-up of Cucuzza’s model. The water tower is long gone, but the building shown, formerly the terminal for Stop 65 on the Lake Shore Electric Railway, is now part of the Beach Park Station shopping plaza.

Including painstaking details such as a handyman on a ladder replacing a missing windowpane in a model of the historic Peter Miller house, Bay Village resident Tom Cucuzza spent approximately 20 hours of his coronavirus quarantine putting the finishing touches on a scaled replica of Stop 65 on the Lake Shore Electric Railway.

The model is representative of Beach Park Station in roughly the 1920s. The panorama includes a working model of an electric railway car.

Historical society photos along with society secretary Thomas Patton’s book, “Images of Rail: Lake Shore Electric Railway,” were some of Cucuzza’s main sources in ensuring the accuracy of the model.

Railway Stop 65 at 33489 Lake Road was an important location for the electric railway, which ran from Cleveland to Detroit until the late 1930s, Tomanek said.

“The railway was basically responsible for the development of this part of Northeast Ohio,” he added.

When trains still ran along the lakeshore, the terminal included a maintenance barn below the station. The maintenance space still exists beneath Beach Park Station, Tomanek said. He added railway tracks were used as supports inside the maintenance bays.

In addition to the Peter Miller House, now a museum maintained by the historical society, the model includes a replica of a barn that sat to the west of the station as well as the vineyard that grew next to the barn. There is a model of the Avon Lake Drugstore, a store Tomanek said he remembers. A small building outside the maintenance barn stored flammable materials used by the railway.

Cucuzza did not start the railway model, but took over the project from Bay Village neighbor Larry Scott, a retired physician.

“Actually, I’m not sure how I got into it,” Scott said. “I did it because I wanted to do a model of one of the historic buildings around here.”

His first project was a model of the Cahoon House in Bay Village. But he added the railway ran behind his home and piqued his interest in the topic.

“That was my motivation, I guess,” Scott said. He added his work on the models took place in the 1990s. He gave up the hobby due to problems with his sight and the Beach Park Station replica sat in his basement unfinished for approximately 20 years. Scott donated the piece to the historical society in 2019 and Cucuzza eventually took over the project.

“I became obsessed,” Cucuzza said, adding he spent long evenings either working on the model or searching for old photos to help ensure historical accuracy.

Tomanek and Patton said the railway museum is slowly taking shape and they are aiming for an opening sometime next year. Tomanek said the biggest hurdle is fundraising. The burgeoning museum sits in what used to be the offices of Patton’s company, Commerce Benefits. Patton collected many of the museum’s display items along with Dennis Lamont, who co-authored the historical society’s book on the electric railway.

Patton seems especially proud of a display built by The Magic Lantern, a video production and museum design company based in Pittsburgh. The display replicates the front of one of the railway cars where the driver sat. Three windows will display video simulating the car driving down the track. Visitors can control the speed of the train and stop or start it.

“Eventually, there is a cow that walks across the tracks,” Patton said with a grin.

The Avon Lake Historical Society was for a time known as Heritage Avon Lake. Tomanek said the name didn’t catch on and the organization decided to switch back to its original title. He said some members objected to the change, noting the organization’s initials would match those of Avon Lake High School. Tomanek said as there is a historical organization in nearly every town in America, nearly every town in America has a historical society named after its local high school.

Museum fundraising efforts include monthly summer concerts near the bright orange railway car sitting in the parking lot of the Beach Park Station plaza. Tomanek said many details have yet to be worked out, but the first show is planned for June 12 at an undetermined time. A July 3 concert will feature the Diamond Project, a tribute to Neil Diamond. Concerts will continue through September. Shows will be free, though Tomanek said the historical society will accept donations.The society plans a formal fundraiser for some time in October.

Check heritageavonlake.org for updates on all society fundraising activities.