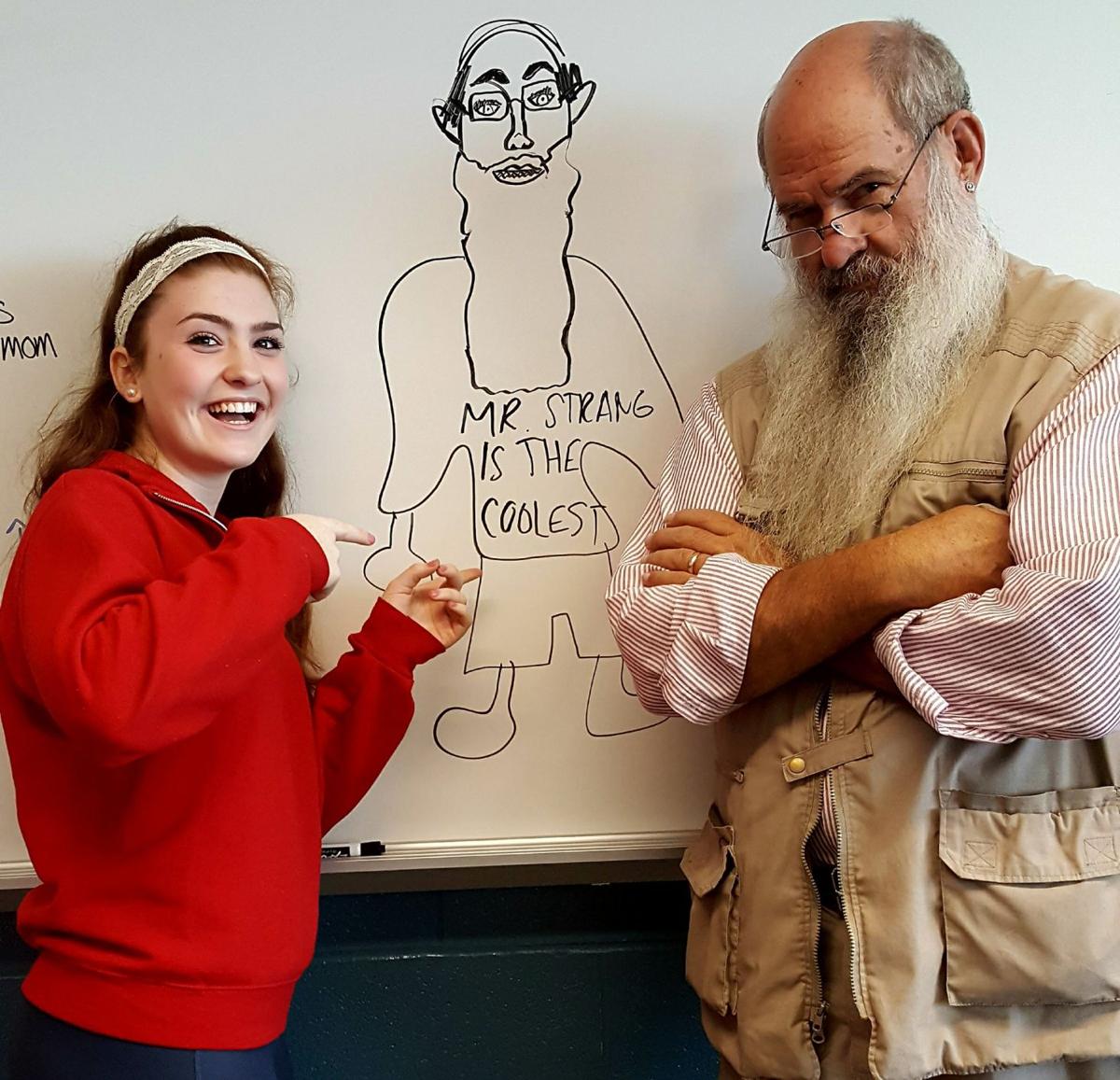 Jim Strang has become and Avon staple in his nearly 12 years of substitute teaching for the city's high school and middle school. 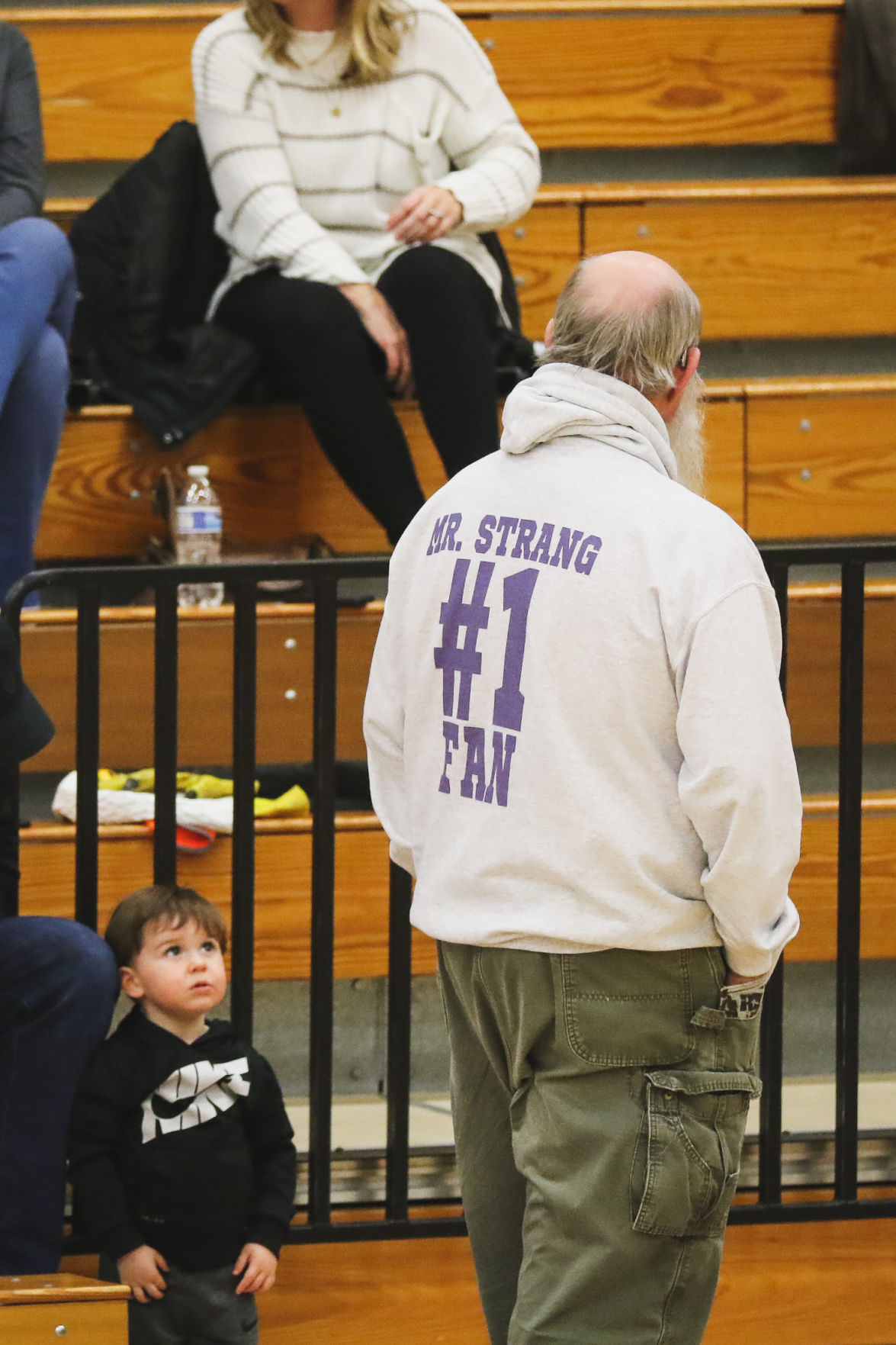 Jim Strang's devout support of Avon's girls basketball team has earned him the title of No. 1 fan from coach Meghan Larrick.

Jim Strang has become and Avon staple in his nearly 12 years of substitute teaching for the city's high school and middle school.

Jim Strang's devout support of Avon's girls basketball team has earned him the title of No. 1 fan from coach Meghan Larrick.

Jim Strang is a hard man to miss at Avon basketball games. He often sits in the first row in Avon’s gym, his long, gray beard sometimes held in check by rubber bands.

Having that familiar, grandfather-like figure at the games, dressed in purple and gold and yelling out support has become a source of consistency and comfort for the team.

The 74-year-old Avon resident is known around the halls of the middle school and high school too, as a well-liked substitute teacher. Strang spent more than 30 years at The Plain Dealer, holding positions including suburban reporter, rewrite man and senior editorial writer.

During that time, he and and his wife of 45 years, Peggy, moved from North Ridgeville to Avon in 1984, following the birth of their first child, MeganLisbeth, in 1983. After sending her and their two other children, Amy and Ben, through the Avon school system, Strang felt teaching would be a way to give back.

Two years after retiring from the PD in 2006, Strang began substitute teaching for the Avon Local School District and has been spending three to four days a week with high school and middle school students.

For nearly 12 years, Strang has followed the same pattern every time he’s walked into a classroom. It’s a routine he started the first time he substituted at the high school.

“One day I got my (substitute teaching) license and next thing I knew, I’m standing in front of Steve Lange’s ninth-grade honors science class,” Strang said. “And under my breath, I said that line from ‘Beetlejuice’ – ‘It’s showtime.’ I still do that.”

Strang can be found at other Avon sporting events, as well as orchestra and band concerts, but the court has become his second home. He has attended girls basketball games for seven years.

In that time, Strang’s presence has earned him the distinction of being the team’s No. 1 fan. Though he swears he didn’t give himself that title.

Coach “Meghan Larrick has dubbed me as the No. 1 fan,” Strang said. “I never laid claim to that, but I’ve got two Avon hoodies that, on the back, say, ‘Mr. Strang, #1 Fan.’ I just enjoy being there. I enjoy the camaraderie.”

Larrick, also an Avon Middle School math teacher, said Strang has “created this relationship with all of our student body, our community and he has been the most tremendous support. He’s that guy that everybody looks to for positive encouragement. He always has a smile on his face (and) he always has something good to say.”

Having Strang as a teacher is an experience unlike any other for Avon students. When they see him in the hallway, many will excitedly ask who he is subbing for, hoping that they get to spend a period with him.

“You see Strang in the hallway and (other students) run up to you (saying), ‘Guess who you’ve got as a sub? It’s Strang,’” Torbert said. “We all love him. Everybody in Avon loves him. He just brightens everyone's day.”

Strang has taught almost every class offered at both schools, though he says social studies and language arts are his favorites. Both subjects are easy transitions for someone who “wrote the first draft of history and now (gets) to teach it.”

“There’s such a relationship between history and news reporting and the language arts.” Strang said. “They all just weave together. I do science courses, I can deal with that. I do a lot of honors algebra in middle school and at the high school, I do honors geometry and calculus. I love honors classes because the worst place you can get is between a kid and what they have to get done. Within two minutes, the classroom is dead quiet and everybody is into what they’re doing.”

When he is in a class where he can get more animated, that’s when his true self shines through. Self-described as “gregarious,” Strang tries to make what he views as dry textbook subjects into something more interesting. Between his knowledge and passion for certain subjects and his theatrical background — doing drama and musicals in high school and starring in indie movies including “The Shadow People,” “The Color of Desire” and “One Day: A Musical” — he has a sense for the dramatic.

“You can’t just sit there and read in a monotonous way,” Strang said. “That quote from ‘Beetlejuice’ is real. I go in that classroom and I am on stage. It is showtime.”

Their experiences with Strang stick with students long after graduation. Tweets dating to 2015 make that clear: “Could you imagine Avon without Mr. Strang?” and “Only Avon kids understand what it’s like to walk into class and see Mr. Strang as the sub.”

Nick Peters, a 2014 graduate of Avon High School, still laughs when he thinks about the classes he had with Strang. Peters graduated from Kent State University in 2018 and is in the process of moving to Coventry Village in Cleveland Heights after living in Avon post-graduation.

“The guy makes such a lasting impression,” Peters said. “Straight out of a book, this guy was supportive and helpful in every way imaginable while also being fun and actually teaching you how to do whatever it is that you were in the class that he was subbing for. He would go above and beyond.”

Strang credits his school success for his ability to listen to students and communicate with them — skills he mastered in journalism.

“You have to hear what the kids are saying and you have to encourage them to tell you what they’re thinking,” he said. “You learn to write so people are interested in what you’re saying. That has always been a help in basic communications with the kids. Keep it simple. Get to the point, but make it interesting in the way you’re doing it.”

Strang knows there will come a day when he will no longer be found in Avon school hallways. Until then, though, he will continue providing his unique brand of teaching and giving back all the love his students have given him.

“I’m blown away by (the support) every day,” Strang said. “I have fun. If I didn’t have fun doing it, I wouldn’t. Somewhere along the line, I hope something I said sticks with them.”