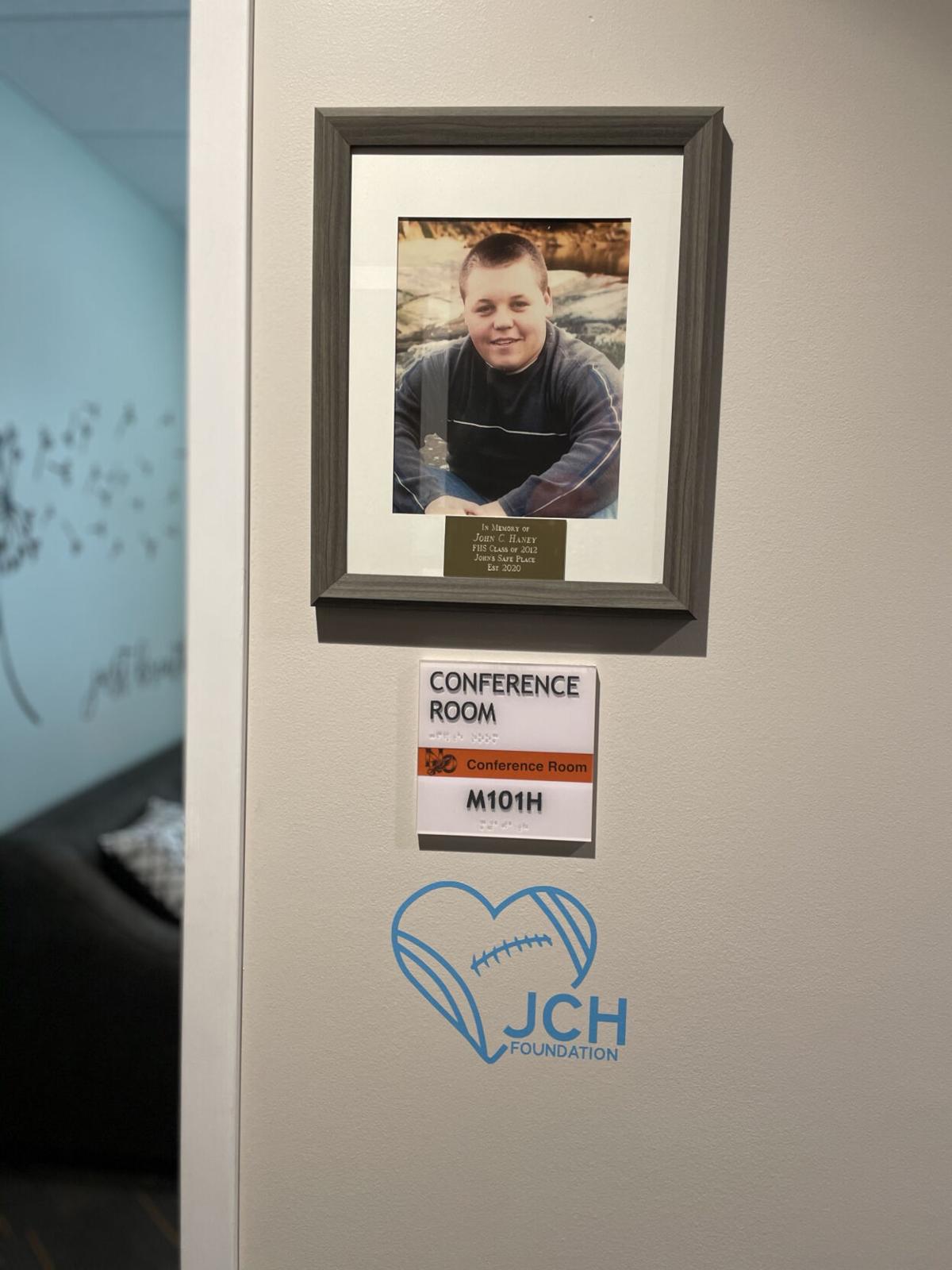 John’s Safe Place in North Olmsted Middle School is a calm room designed for use by students experiencing anxiety or going through a rough time. It’s the second room of its kind put together by Rick and Beth Haney of the John C. Haney Foundation, who hope to create more across Northeast Ohio. The room includes a host of amenities, such as a couch, aquarium, encouraging artwork on the walls, and sensory items like puzzles. The rooms are dedicated to Rick and Beth’s son John, a 2012 Fairview High School graduate who took his own life in 2017. 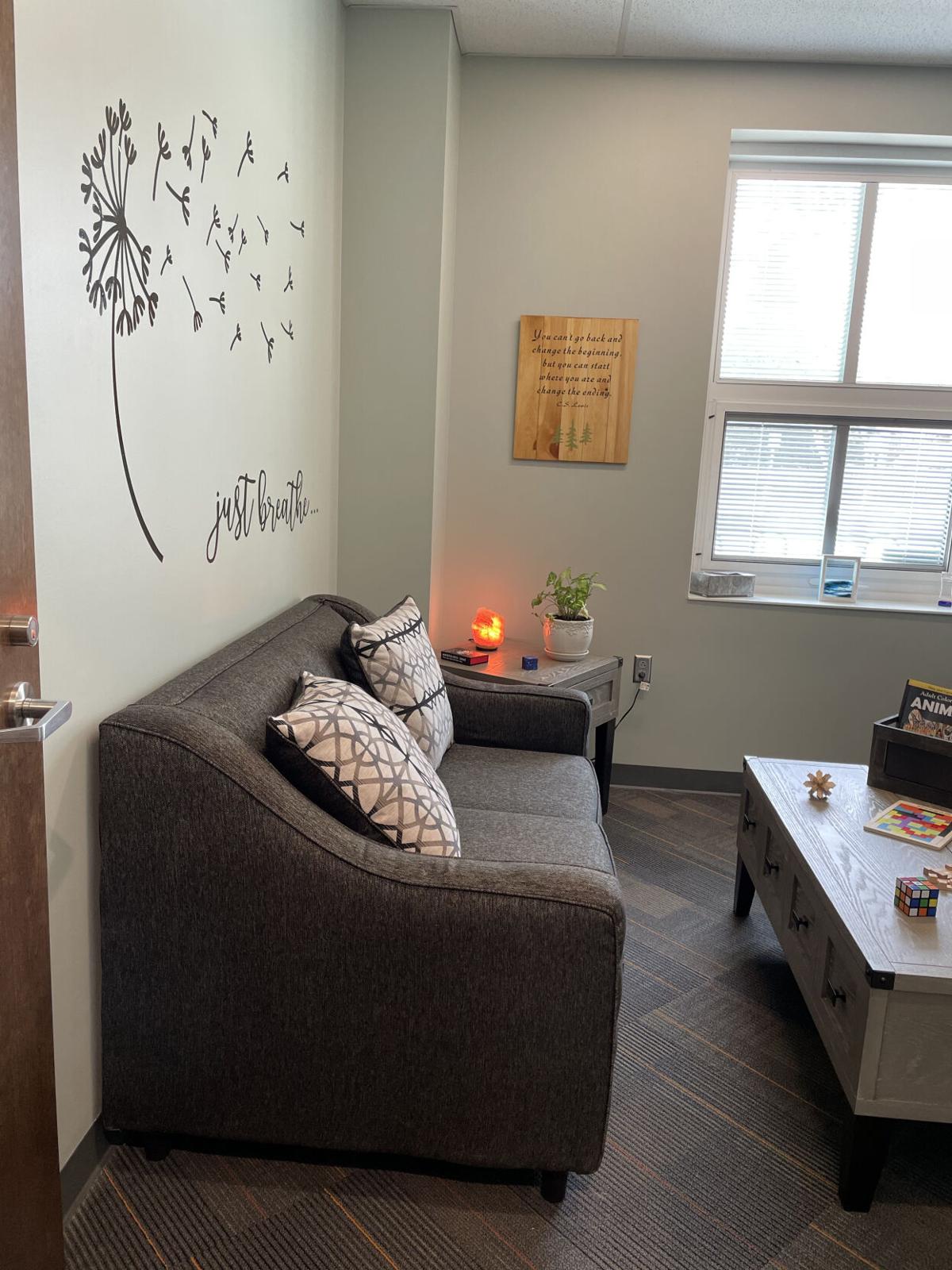 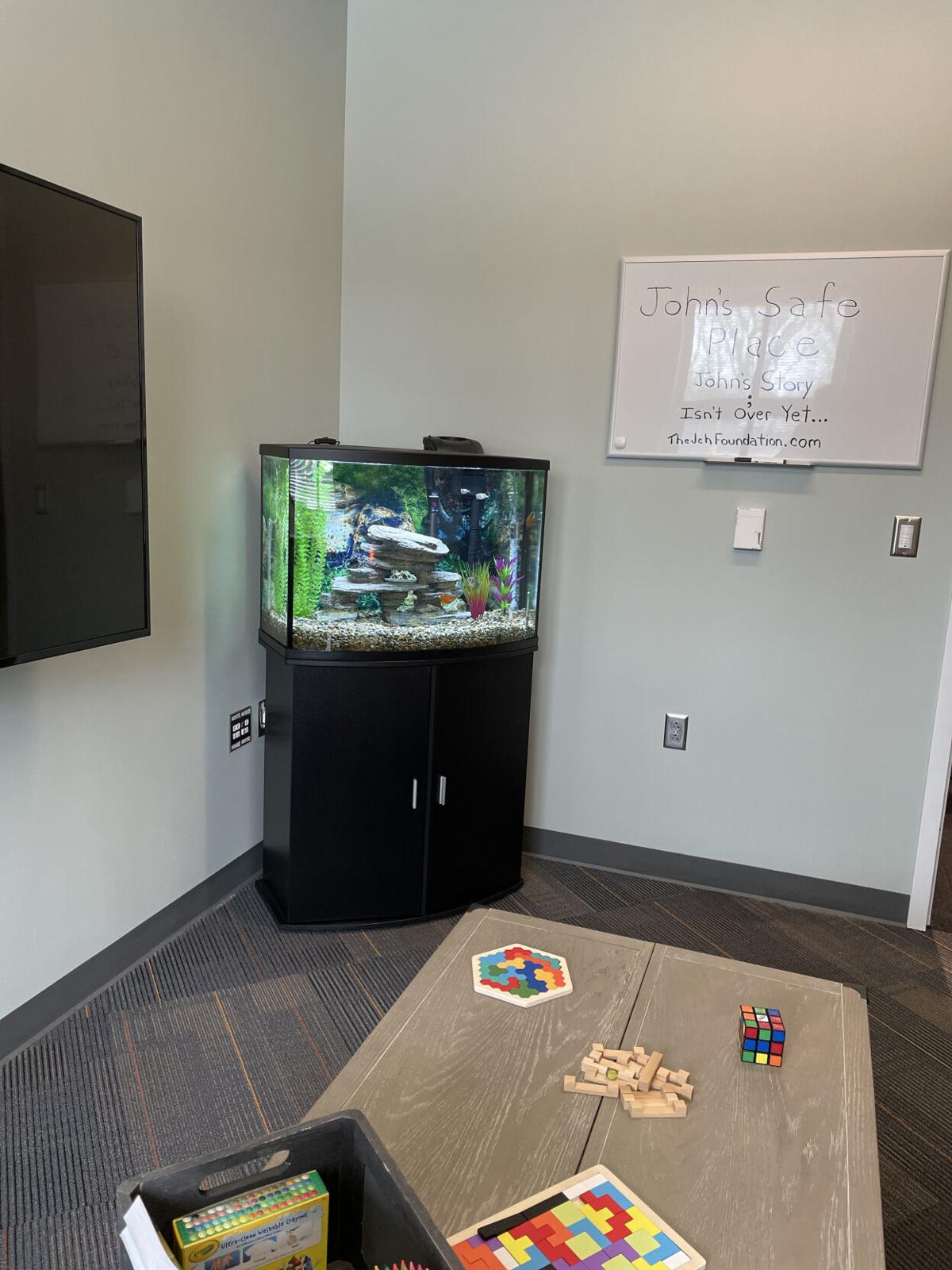 John’s Safe Place in North Olmsted Middle School is a calm room designed for use by students experiencing anxiety or going through a rough time. It’s the second room of its kind put together by Rick and Beth Haney of the John C. Haney Foundation, who hope to create more across Northeast Ohio. The room includes a host of amenities, such as a couch, aquarium, encouraging artwork on the walls, and sensory items like puzzles. The rooms are dedicated to Rick and Beth’s son John, a 2012 Fairview High School graduate who took his own life in 2017.

When it comes to John’s Safe Place, the goal was never to stop at just one.

The calm room, designed to comfort students feeling anxiety or simply having a rough day, was first created for Lewis F. Mayer Middle School in Fairview Park by residents Rick and Beth Haney in honor of their late son, John, a 2012 Fairview High School graduate. When that room was officially opened in October, the Haneys’ hope was that they could add them to schools across the area.

In late December, that dream of expansion came to fruition at North Olmsted Middle School, 27401 Butternut Ridge Road, when a second room was completed.

“The room turned out beautifully,” Rick said. “It turned out very similar to the one in Fairview...It’s turned out really well. It’s definitely serving its purpose in what our whole goal was to start with. Just to put two in in 2020 is amazing to us.”

The new room, next to the principal and vice principal’s offices, is also just down the hall from where school guidance counselors are located. It’s a little smaller than its counterpart in Fairview, but it contains most of the same items – selected by the Haneys for both comfort and sensory immersion – purchased from various outlets using funds entirely generated by their John C. Haney Foundation. It costs between $2,500 and $3,000 to complete a room.

Using information provided by the Cleveland Clinic, the room was painted in a shade called “Comfort Gray” and filled with a litany of items designed to help any student occupying it feel calm and safe, including a loveseat, large beanbag chair, Himalayan salt lamps and puzzles.

The room is supervised by school counselors, and students must sign in before using it.

Principal Bryan Busold believes the room will be a major help to the school, especially as the COVID-19 pandemic has upended daily life for so many.

“I’m excited to have such a purposeful space for our kids that need a place to decompress while in school,” Busold said. “Students are doing school in an unprecedented time in our recent history. The amount of stress and anxiety that we’ve seen in our kids at NOMS and across all borders is substantial. This room will help bridge the gap between students feeling too anxious or stressed to even think about school and feeling comfortable among their peers in the school building.”

The Haneys started their foundation in 2018. Their son, John, a decorated football player who starred on the Fairview Warriors’ offensive and defensive lines and later played collegiately at Baldwin-Wallace University, took his own life in 2017, shocking everyone who knew him.

To Rick and Beth, he was a 5-foot-11, 300-pound “gentle giant”, lighting up rooms with his smile. In previous years, the foundation has fundraised and provided $1,000 scholarships to Fairview High School seniors and donated to various organizations that specialize in suicide prevention.

With John’s Safe Place, the couple hopes to get two or three more up and running by the end of 2021.

“We have a plan, but it’s going to be a process,” Rick said. “We want to start reaching Northeast Ohio with these (rooms).”

In the short term, one hurdle to that goal will be funding. The pandemic put on pause their usual fundraising efforts, and after constructing the two rooms in Fairview and North Olmsted, they’re running low on the money necessary to continue expanding their project. As they can secure more funding, they will pursue outfitting more rooms.

To learn more about the John C. Haney Foundation or to donate, visit www.thejchfoundation.com.

Rick and Beth have had to learn about running a foundation and building calm rooms on the fly, but they’re thankful for the help they’ve received from a variety of sources. School administrators have been welcoming, and stores such as Bob’s Discount Furniture in North Olmsted, 26350 Brookpark Road, have even donated items for the rooms.

“The Lord has opened some doors for us, and we just keep walking through,” Rick said. “We’ve met some truly wonderful people. I can’t say enough about North Olmsted. North Olmsted has embraced this whole thing.”

Just like the room in Fairview, the North Olmsted version will include the same finishing touch – a photo of John – greeting students and staff at its entrance with that memorable smile.

“It’s our prayer that no parent should have to go through what we went through,” Beth said. “No child should have to struggle like our child struggled, and we didn’t know that...To have a place to go, even if they’re just having a bad day, and know that there’s comfort and security somewhere and doors are opened and there’s hope, that’s our goal.”