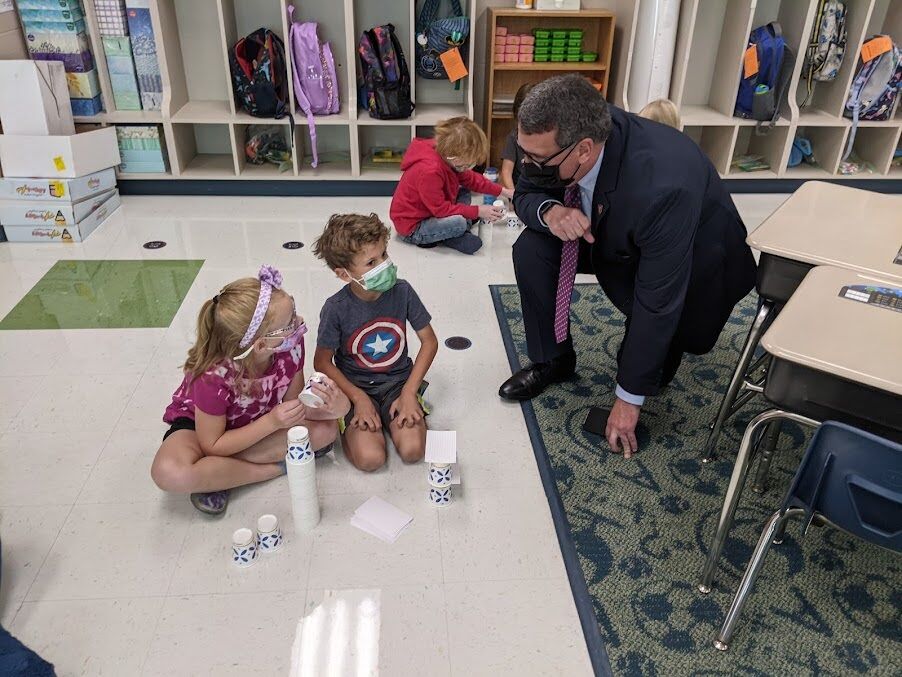 Keith Ahearn kneels next to two students participating in a STEAM challenge, he asks them what they are working on and why. 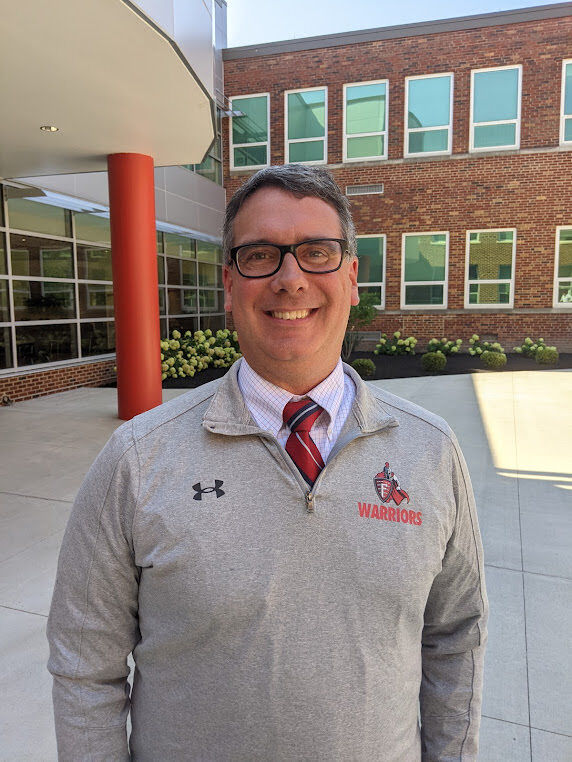 Keith Ahearn was selected in April by the search committee to become Fairview Park School’s superintendent, his first day was on Aug. 1 when he reached out to build relationships within the district. 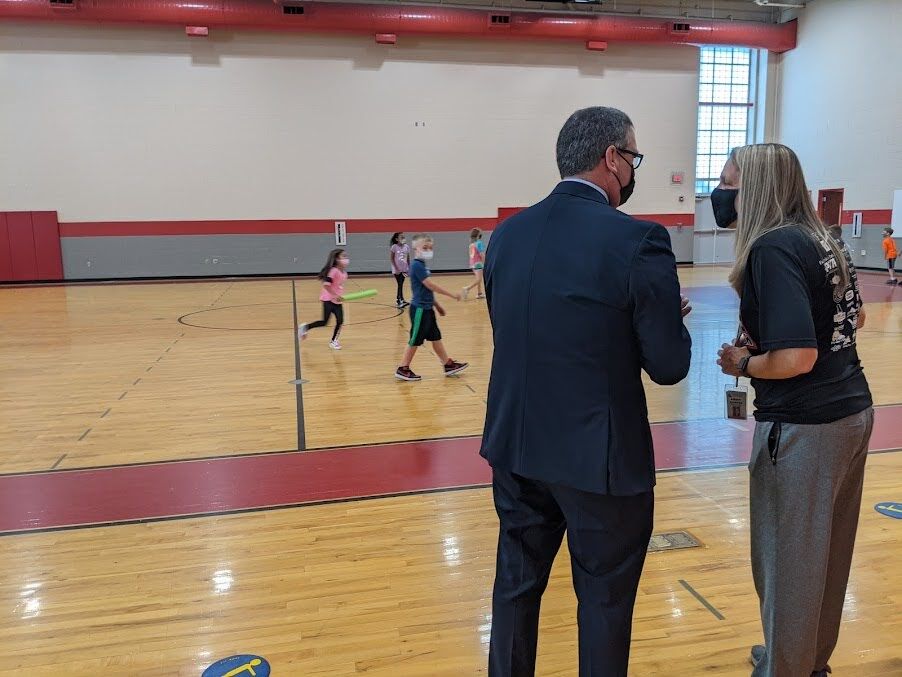 Ahearn asked the teachers what the rules for the game were as children played exercise tag in their morning gym class.

Keith Ahearn kneels next to two students participating in a STEAM challenge, he asks them what they are working on and why.

Keith Ahearn was selected in April by the search committee to become Fairview Park School’s superintendent, his first day was on Aug. 1 when he reached out to build relationships within the district.

Ahearn asked the teachers what the rules for the game were as children played exercise tag in their morning gym class.

Superintendent Keith Ahearn wears a navy suit, a red tie with blue stripes, a Fairview Park pin and a mask as he heads into Gilles-Sweet Elementary School at the end of the first week of classes.

Ahearn visited multiple classrooms on Sept. 3 starting an eight-hour day in a gym class where students played exercise tag. Two students were it, tagging with pool noodles classmates who then had to go do push-ups, jumping jacks or another form of exercise before returning to the game.

Laughter and music filled the gym as students chased each other across the floor.

“Everybody is just really excited to have students back in person,” Ahearn, 47, said. “It’s a team effort. I started my day bringing doughnuts to our bus drivers, who are sometimes the forgotten heroes.”

Ahearn joined the Fairview Park school district in April following a three-month search after Superintendent Bill Wagner announced his retirement in November 2020. His first day of work after being selected was Aug. 1

Ahearn’s leadership style stood out during the initial round of interviews, said school board President Joslyn Dalton. She said he was approachable and looked at issues from all angles to find the necessary solution.

Ahearn started Aug. 1. First order of business, he said, was getting to know the staff and teachers.

“This is an innovative school district that looks to support students and meet them where they are,” Ahearn said. “The first priority here will be to support these students emotionally, socially and academically since they’ve lost a lot during the pandemic.”

Following the gym class, Ahearn walked to Nicole Pruente’s first-grade class, where students were participating in a STEAM-focused learning challenge. The students, split into pairs or groups of three, were working with paper cups and notecards to see who could build the tallest tower.

“We need to stretch our bubblegum brains, because when we make mistakes we learn something,” Pruente told students as towers fell across the classroom.

Ahearn knelt down with two students when he first entered the room, asking them directly what they were working on.

“I always ask students two questions, ‘What are you doing?’ and ‘Why?’” Ahearn said. “Sometimes kids can get lost in an activity, but it’s important to reiterate what they are learning.”

The first week was off to a smooth start, in his opinion. The kids were back in the building and formulating their routines and procedures for a successful learning environment. Ahearn believes that the mid-September assessments will be one of the challenges for the district this year.

“We know that remote learning was not the same as in-person so we’ll be looking at that data and trying to figure out how we can fill in some gaps that might have occurred last year,” Ahearn said. “We want to keep students on grade level and growing. We don’t expect them to necessarily make a benchmark, but we expect that every student grows every year.”

The goal is to meet them academically and provide them with the right tools and interventions to get them where they need to be.

After speaking briefly to Pruente, Ahearn led the way to an art classroom, where he was amazed at the technology students were using. His favorite art piece was a statue near the door made of discarded art material and stacked upward.

He moved to Fairview Park in July, wanting people to know he was “all in” due to the connection he felt to the schools and the surrounding community. Ahearn is married and has three children an 18-year-old son and two daughters aged 15 and 12.

“I want to be a partner to people, so one of the things I want to grow here in being new to the community is getting to know the names of students and the entire staff as quickly as I can,” Ahearn said.

He said his favorite moments have been watching students address the staff at the convocation before school began and seeing everyone return on the first day.

“I have been at this for 27 years now and the faces of the students when they come back to school on the first day never get old,” Ahearn said. “When it does get old for me, then that’s when I probably need to start looking at a different career.”