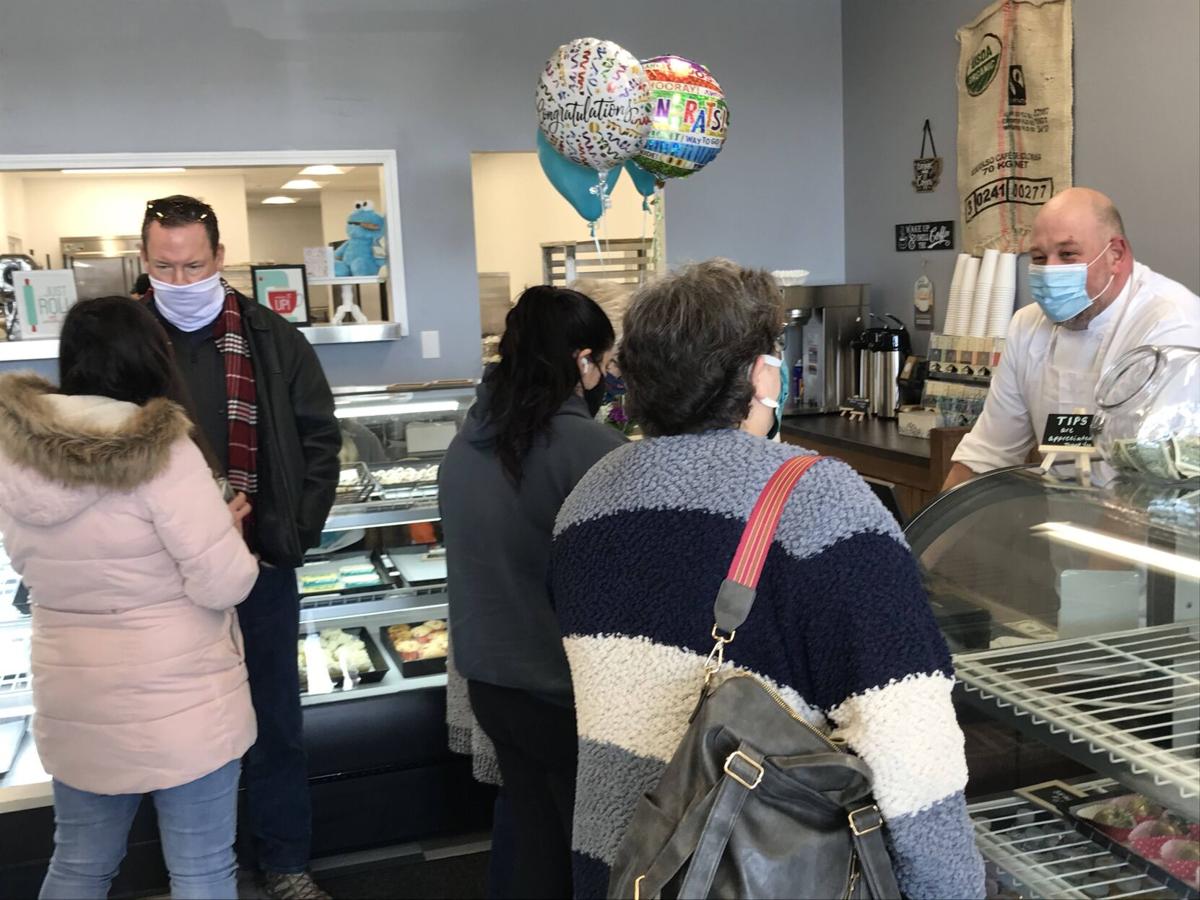 Cornett waites on just a small fraction of the customers packed into the new bakery he started with partner Monica Webb. 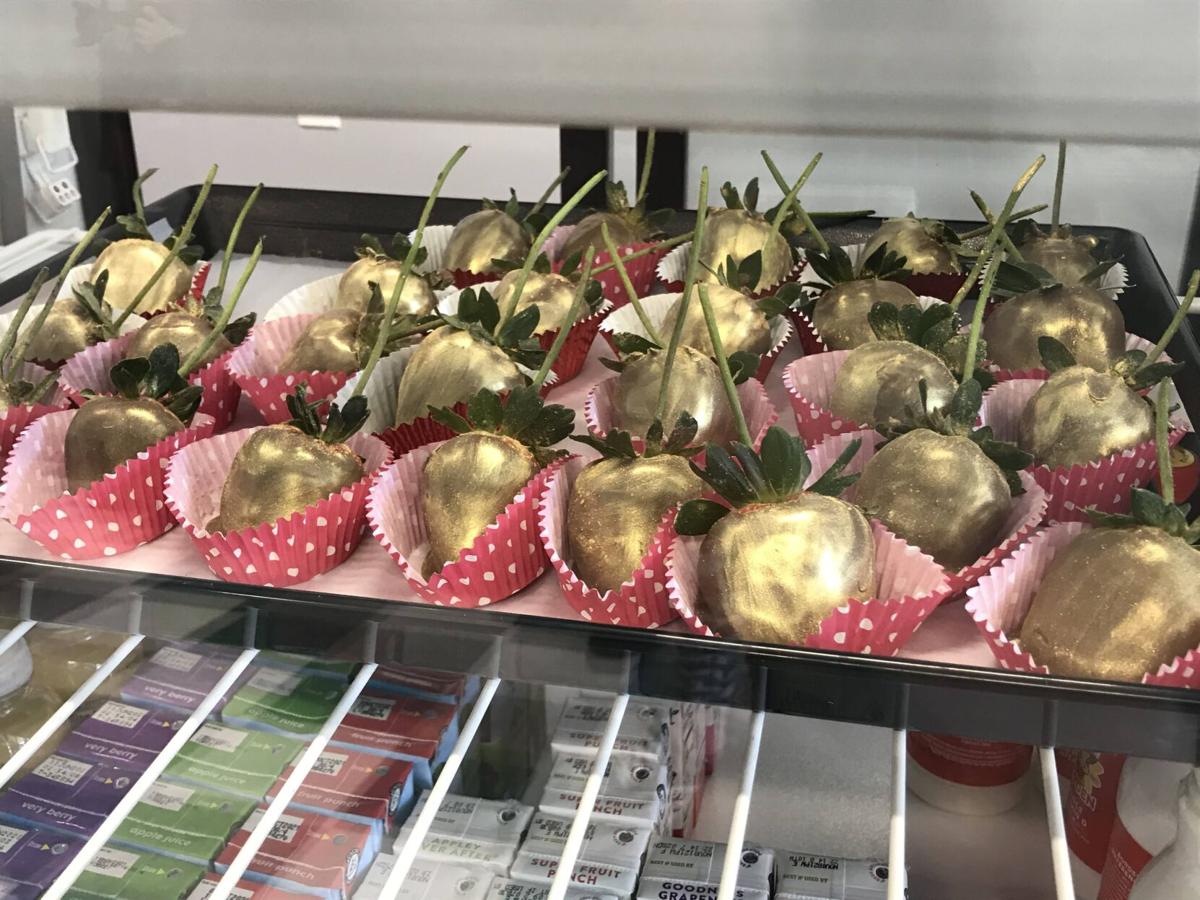 Chocolate covered strawberries covered with real gold flakes were just one of the many items on display at the bakery Saturday. The bakery features many German, Hungarian, Slovak and Polish items.

Cornett waites on just a small fraction of the customers packed into the new bakery he started with partner Monica Webb.

Chocolate covered strawberries covered with real gold flakes were just one of the many items on display at the bakery Saturday. The bakery features many German, Hungarian, Slovak and Polish items.

The inside of the small space smelled like a great memory of grandmother's kitchen at Thanksgiving or Christmas.

City officials held a ceremonial grand opening for Mimzy's Bakehouse in Town Center Saturday, well attended despite frigid temperatures. Customers filed in after doors opened, quickly filling the store. Some walked around shiny new display cases filled with cookies, cupcakes and plenty of other sweet treats. Anxious to buy some of those treats, many visitors formed a line soon stretching from the back of the store to the front and from one side to the other.

Numerous other would-be customers looked through the bakery’s windows, saw the long line and decided to come back another day.

City Council President Martin O'Donnell said he is a great fan of bakeries.

"It's good to have a homemade bakery back in the city," he said.

"I think it's wonderful and I think it will be a big success," he said.

Co-owner Ron Cornett operated the store's cash register as quickly as he could.

He greeted numerous customers by name even though this was the bakery's inaugural day.

Mimzy’s Bakehouse started in the home kitchen of Cornett and Monica Webb two years ago as Cookies & More, specializing in hand-iced sugar cookies.

As demand for their cookies grew, taking over most of their house, they decided they needed a storefront location. The owners use recipes handed down over five generations said city Economic Development Director Ted Esborn.

Saturday’s grand opening showed off only a small portion of the bakery’s menu, Esborn said. The full menu includes both savory and sweet items, including breads and many other baked goods to kolachkes (sweet pastry holding fruit surrounded by puffy dough) and other European recipes.

“We chose Avon Lake for the first store because the community is known throughout Northeast Ohio as a city that supports local businesses and has a strong family identity,” Webb said.

“For the city of Avon Lake, anticipation for Mimzy’s has been unique. A new bakery with a large dynamic menu certainly got the attention of Avon Lake residents,” Esborn said. “Plus, Monica and Ron had a prominent presence on social media with lots of pictures of their baked goods. That generated a lot of excitement.”

He later said the space now home to the bakery was vacant for about two years. Mimzy’s is located at 32842 Walker Road.

“It’s a pet-oriented business, but I wouldn’t exactly call it a pet store,” Esborn said. “They certainly have dog and cat products, along with grooming.”

EarthWise’s website describes the store as a nutrition center and wellness spa. Products include natural and environmentally friendly products. Go to avonlake.earthwisepet.com.

Both Onyx and EarthWise share an address of 375 Lear Road in the Learwood Square Shopping Center.

Onyx hopes to be the first of the two new Learwood stores to open, with a potential grand opening March 3. EarthWise plans a soft opening in mid-March. Both businesses are taking over existing storefronts.

“It’s kind of a nice, clean lineup right now of businesses slated to open,” Esborn continued. “As the pandemic crisis sort of continues for small businesses, it’s great to be able to open new businesses.”