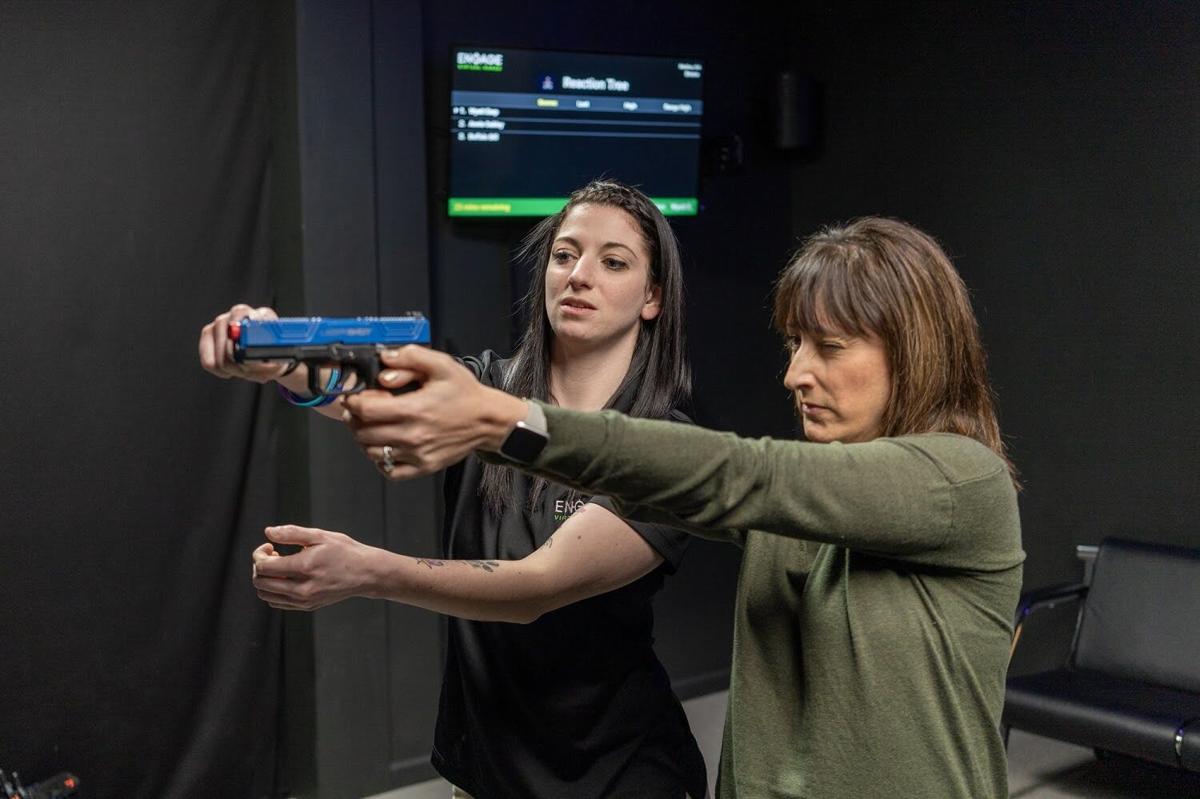 Engage instructor Dawna Sergent demonstrates how to hold and aim a pistol at the virtual range in Medina. Engage Virtual Range is set to open its second location in Avon Lake in a formerly empty storefront. 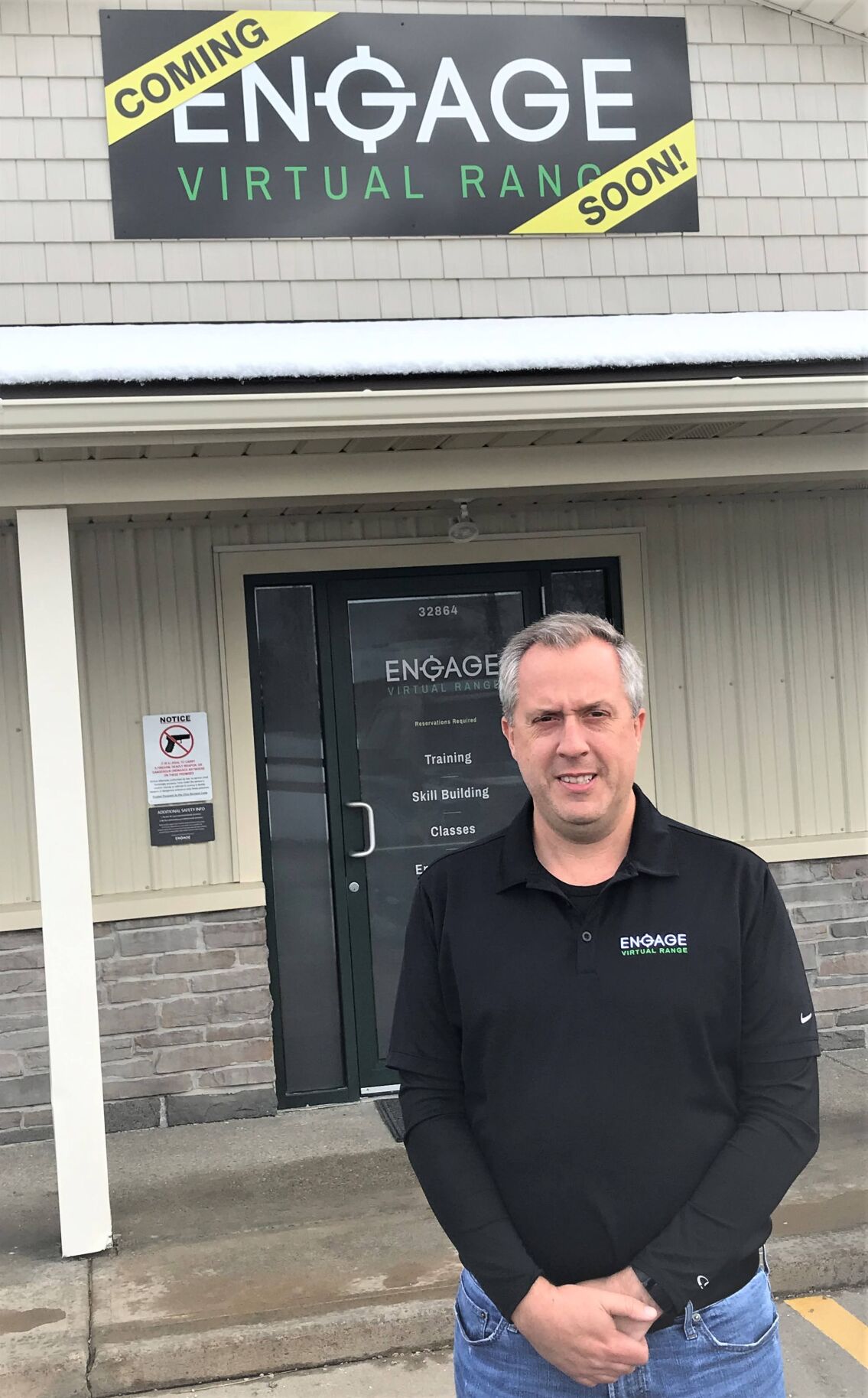 Engage instructor Dawna Sergent demonstrates how to hold and aim a pistol at the virtual range in Medina. Engage Virtual Range is set to open its second location in Avon Lake in a formerly empty storefront.

Minus the smoke and noise created by real weapons, gun novices, expert marksmen and law enforcement officers will soon be able to hone their shooting skills at the area’s first indoor public firing range.

Engage Virtual Range opens its second location beginning with an open house May 8 at its new facility on Pin Oak Parkway.

The first Engage range is at 5035 Beach Road, Suite B, in Medina.

“You can get all of the shooting practice you want,” said owner and operator Chad Wilson, “without all the smoke and noise.”

Virtual Range visitors use lasers to take aim at video targets roughly 12 feet away. For civilian shooters, the only guns used are pistols, not rifles or similar weapons.

Engage pistols used are as realistic as possible, Wilson said. They are authentic in weight and users must “load” their weapons, check safeties and take other measures similar to firing an actual pistol. The guns even create realistic recoil. Visitors must follow all the same safety rules a live shooting range would require.

Having his guns recoil is important, Wilson said, as recoil definitely affects how a shooter aims.

While the pistols used by Engage are as realistic as possible, shooters are not required to wear goggles or ear protection.

Knowing how and when to use a gun is one major reason for taking shooting lessons at Engage.

“During an emergency is not the time to find out how and when to use a weapon,” Wilson said.

His clients, he said, are split roughly 50-50 between men and women.

Learning to shoot or practicing existing skills are the main reasons to visit Engage. But Wilson also talked about the entertainment factor of shooting. He said it is not unusual for customers to celebrate birthday parties and other occasions there. Groups of up to four people are allowed on any range.

Wilson added family groups also are frequent visitors at the Medina location. Parents, he said, want children to learn the ins and outs of gun safety as well as the basics of how and when to shoot. Participants must be 12 or older.

The Avon Lake location, 32864 Pin Oak Parkway, still is under construction. It will have two shooting ranges and a classroom. Rooms are approximately 12 feet by 21 feet. The classroom is most often used by law enforcement to practice various techniques and simulate real-life situations, such as handling non routine traffic stops requiring them to pull their weapons. Officers engage with video images on classroom screens. Engage weapons are drawn from holsters, which adds to the authenticity of the shooting experience, especially for police.

While the general public is limited to using pistols, the most common model being a Glock 17, law enforcement can practice with assault rifles, allowing for even more realistic simulations.

All weapons used are altered in minor ways from their live-fire counterparts so as to avoid any copyright infringement, Wilson said.

Wilson uses part-time trainers to teach most of his customers. One full-time trainer is Terry Helton, who retired after 29 years with the Ohio State Highway Patrol.

“If you enjoy shooting, this is a great place to try out,” Helton said.

Because of his background, Helton often works with law enforcement visiting Engage.

“The whole thing is very realistic,” Helton said, adding the simulations can be of great benefit to police.

While Engage will soon be opening its second location, more may follow in the future. Wilson said he only recently received the legal right to franchise his operation.

Wilson added he receives little criticism or public blowback regarding his Medina range, which opened approximately three years ago. He said COVID-19 hurt Engage just as it has virtually every other business.

“But we're bouncing back,” Wilson continued.

Wilson said he appreciates some public opposition to guns, especially in light of the various mass shootings that have happened in the past few years.

“We are not a shoot-them-up kind of place,” Wilson said, noting only law enforcement take aim at virtual human targets. He indicated some lacks in gun control are largely undesirable.