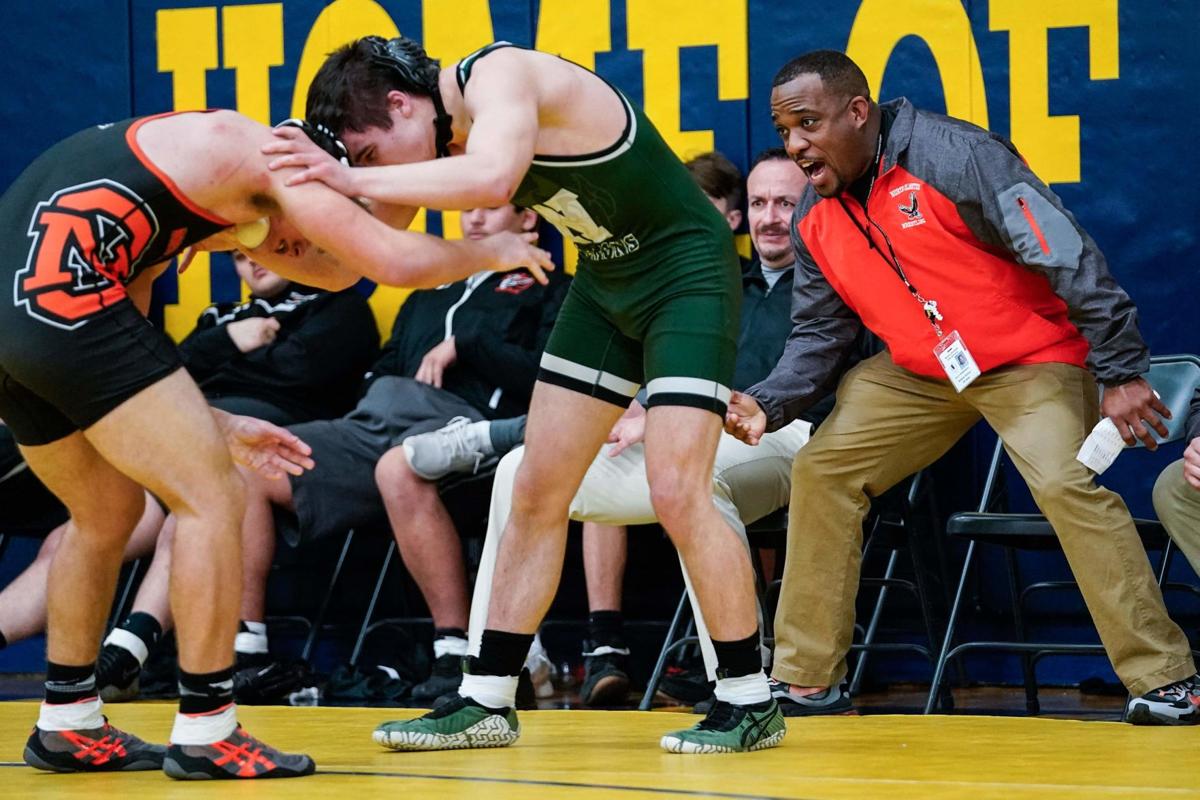 North Olmsted's wrestling coach Kerry McWoodson coaches one of his wrestlers during a match against Westlake Thursday. The Eagles went 2-0 in the quad meet at North Ridgeville, beating the Demons and the Rangers. 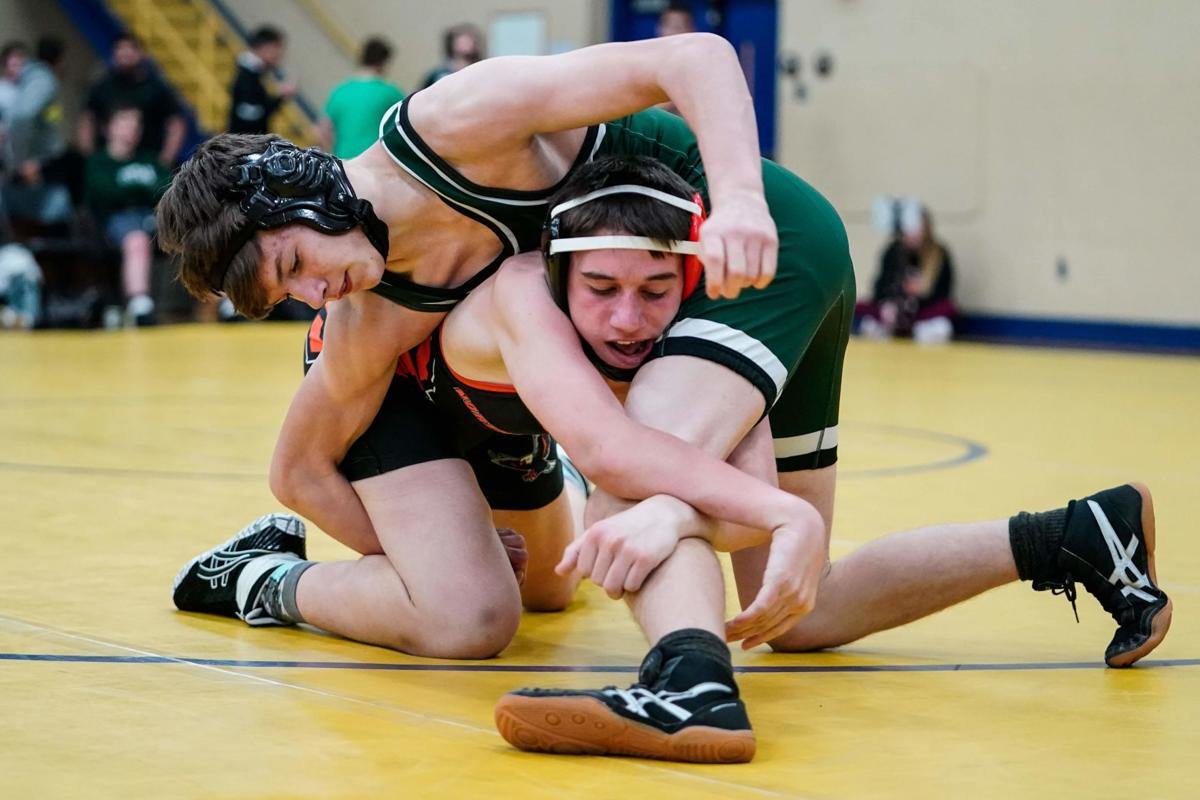 North Olmsted's wrestling coach Kerry McWoodson coaches one of his wrestlers during a match against Westlake Thursday. The Eagles went 2-0 in the quad meet at North Ridgeville, beating the Demons and the Rangers.

North Olmsted and Olmsted Falls were perfect Thursday night in North Ridgeville. Both the Eagles and the Bulldogs finished 2-0 in a Southwestern Conference wrestling quad meet, beating North Ridgeville and Westlake.

The Rangers jumped ahead to an early 21-6 lead over the Eagles in a stretch that included two Ridgeville pins and a forfeit win. A Ranger forfeit at 138 pounds and a first-period pin by North Ridgeville’s 145-pounder Tyler Fair increased the lead to 27-12, the last points the Rangers scored.

“The change came at 152 with Mohamed Shoman,” North Olmsted coach Kerry McWoodson said. “From there on up, our upper weights really took over for us. It was a great comeback.”

Against Westlake, the Eagles jumped out to a 15-0 lead after two forfeits and a pin in the first three weight classes. From 126-lbs to 145-lbs, the Demons rattled off 24-unanswered points of their own on a pin from Cole Yuhas, a forfeit for Khaled Askar and pins by Robbie Palmer and Aiden Ashburn.

Shoman picked up his second pin to cut the lead to 24-21 and a decision by Avery Jones tied the match. The team then traded decisions for another tie at 27-27 before Mo Zayed (195-lbs) picked up a pin to put Westlake ahead 33-27. Back-to-back forfeits for Westlake sealed the 39-33 win for North Olmsted.

“We had some individuals that were solid tonight and did what they were supposed to do,” “Overall, I think we have a lot to work on and we struggled a little bit in that last match with some of our fundamental takedowns and defense. North Olmsted was well-coached and took advantage of it.”

Olmsted Falls had a similar start against Westlake, using two forfeits, a major decision and a pin to build a quick 25-3 advantage. Westlake picked up six points at 145-lbs (Aiden Ashburn), 160-lbs (Hunter Ashburn) and 182-lbs (Moe Zayed) to get as close as 31-24. A decision and two forfeits later, the Bulldogs came away with the victory.

“(We’re) feeling pretty good. Every conference match is a battle,” Olmsted Falls coach Bryce Burkhard said. “We take every match seriously so to see our kids come out and battle – two good wins tonight – (and) anytime you’re getting wins in the SWC, I’m happy with that.”

The Bulldogs made quick work of the Rangers with North Ridgeville’s only points coming at 113-lbs on a Zachary Orseno pin, which tied the match at 6-6. A major decision and a technical fall gave the Bulldogs nine quick points. That was followed by five pins (132-lbs, 152-lbs, 160-lbs, 182-lbs and 190-lbs), three forfeits (138-lbs, 220-lbs and heavyweight), a decision at 145-lbs and stoppage at 170-lbs after North Ridgeville’s Alex Douglas couldn’t continue against Olmsted Falls’ Gavin Miner due to a head injury.

“We weren’t capitalizing on scoring opportunities (against North Olmsted),” First-year Rangers coach Joel Melvin said. “We weren’t creating scoring opportunities for ourselves. A big problem we’ve had this year is we’ll start (and) we’ll stop. We have a lot of work to do when it comes to that. I really thought the North Olmsted dual was a really winnable dual for us. That one hurts.”

All four teams wrestle Thursday as Westlake (vs. Amherst) and North Olmsted (vs. Berea-Midpark) have home meets while North Ridgeville (at Lakewood) and Olmsted Falls (at Midview) have road meets.