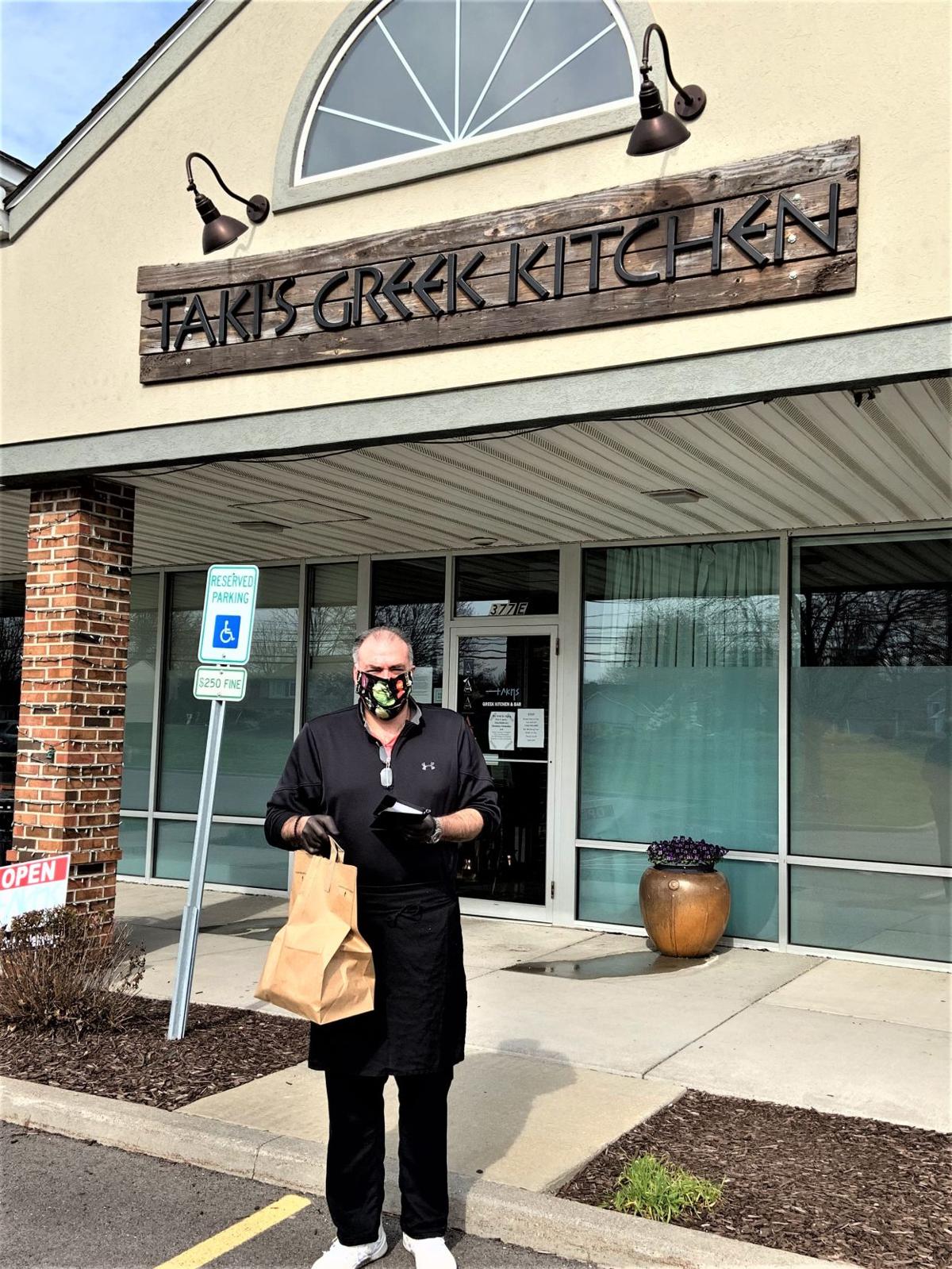 Peter ‘Taki’ Diamantis personally brings carryout dinner to a customer of Taki's Greek Kitchen on Lear Road. The restaurant was one of 25 to receive a grant from Avon Lake's Community Improvement Corp. and the Avon Lake Waterfront Corp. 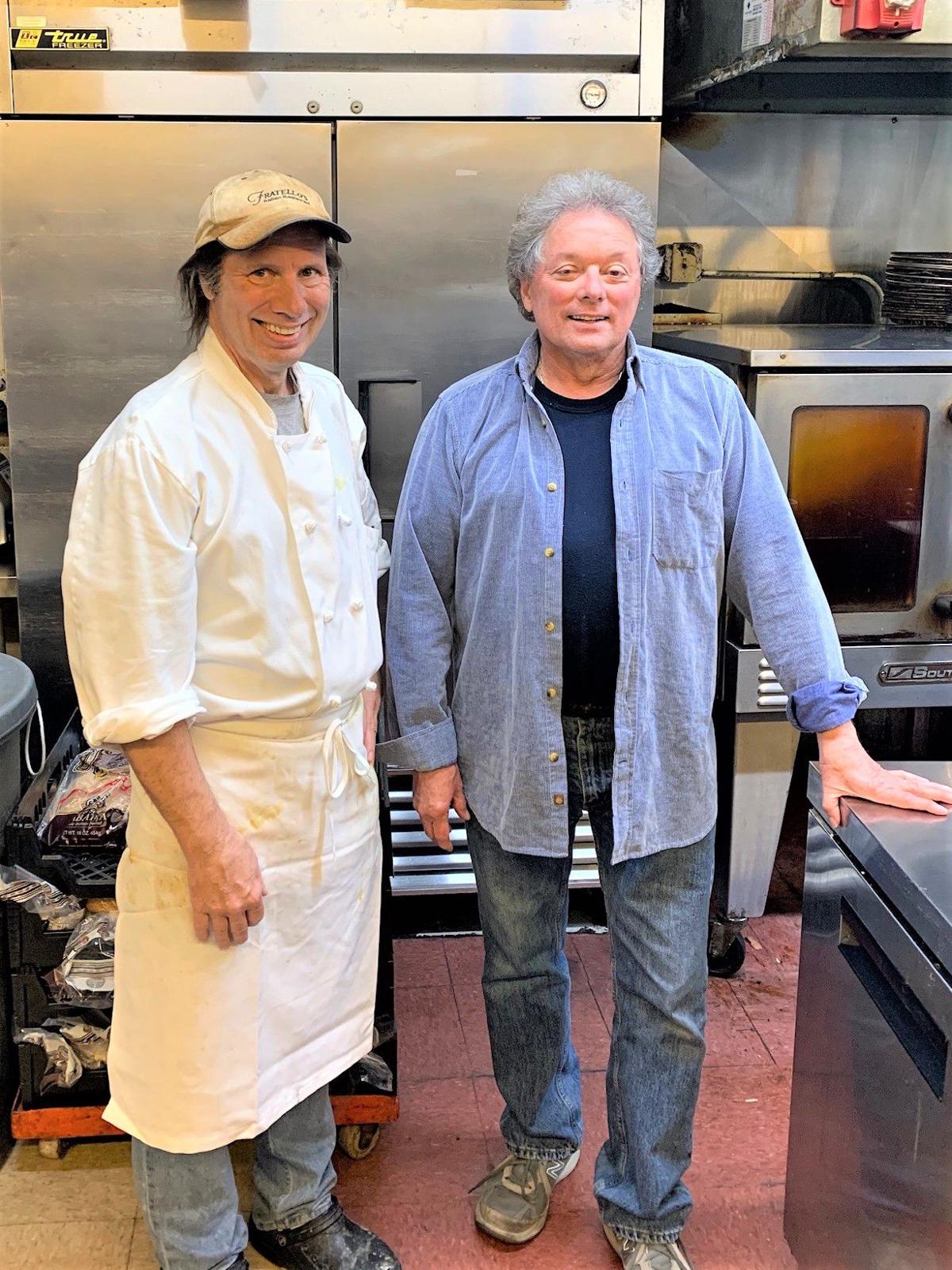 Brothers Craig (left) and Ron Heldorfer, co-owners of Fratello’s, used a grant to maintain health insurance for full-time employees, including those laid off during the current COVID-19 crisis. They’re pictured in their kitchen as they prepare to ready the day’s carryout orders.

Peter ‘Taki’ Diamantis personally brings carryout dinner to a customer of Taki's Greek Kitchen on Lear Road. The restaurant was one of 25 to receive a grant from Avon Lake's Community Improvement Corp. and the Avon Lake Waterfront Corp.

Brothers Craig (left) and Ron Heldorfer, co-owners of Fratello’s, used a grant to maintain health insurance for full-time employees, including those laid off during the current COVID-19 crisis. They’re pictured in their kitchen as they prepare to ready the day’s carryout orders.

Some say Friday the 13th is an unlucky day. But for 25 lucky restaurants and bars in Avon Lake, it might have been the best day they've had in the past seven weeks.

On that evening, phones were ringing wildly, according to Avon Lake Economic Development Director Ted Esborn. Members of the Community Improvement Corp. were busy hatching a plan to help out locally owned restaurants throughout the city.

Earlier that day, Ohio Gov. Mike DeWine dropped broad hints about closing restaurants and bars ahead of St. Patrick's Day to stave off the spread of COVID-19. Less than 48 hours later, the entire restaurant industry in Ohio was shut down, except for carryout and delivery.

Esborn said the group, composed of five resident volunteers, was determined to announce a support effort immediately following the shutdown to give local restaurants and bars some hope and reassurance amid otherwise terrible news.

The CIC plan, aided by a financial contribution from Avon Lake Waterfront Corp., host of the city's popular Winefest, provided the 25 restaurants and bars an aggregate $98,000 in grants ranging from $3,000 to $4,000 each.

Ron Heldorfer, co-owner with his brother, Craig, of Fratello's on Electric Boulevard. was a grant recipient. He said he'd gotten wind of something going on to aid restaurants. Ultimately, he connected with Esborn.

Heldorfer said the $4,000 check was more than he had hoped to receive. Funds were used to pay both employer and employees’ portions of health insurance premiums for full-time employees, half of whom were laid off. Heldorfer was emphatic they would not suffer the additional grief of losing health care coverage “especially in a pandemic.” He will continue to pay 100% of their premiums until he can bring them back to work. “They won't have to pay it back either,” he said.

Peter “Taki” Diamantis had to release half his staff and used the $4,000 grant money he received to pay the few who are left. He has turned to carryout, but said he's doing about half of his normal business.

He admits the shutdown overwhelmed him as it is like nothing he has experienced in more than 20 years in the restaurant business, the last nine at his current location, Taki's Greek Kitchen on Lear Road.

“I was very grateful,” he said about seeing the check arrive.

He said he is fortunate to have some reserves on hand that allow him to remain open for now. He is nervous about the future since there has been no guidance from the state or the restaurant association about a possible reopening date or the requirements that will allow them to reopen. Both Diamantis and Heldorfer say that if they are permitted to seat just 25% of their usual capacity, they will have to weigh whether it's worth it. Heldorfer said that under those conditions he would continue to provide carryout, hoping that would balance expenses with revenue. He said he recently began offering his curated wines for sale and hopes, as word spreads, that will provide an additional revenue source.

Diamantis said he's not sure about the future. He knows expenses will go up and wonders who will survive. He's not the only one who worries about the survival of small, local businesses.

Dan Bucci, former Avon Lake city councilperson and one of three creators of the Waterfront Corp., which contributed toward the grant fund, acknowledged the restaurant business “is a very hard industry to be successful in.”

He said when he heard about CIC's effort, he called Charlie Sextella and Jan Dalman, who, with Bucci, make up the Avon Lake Waterfront Corp. “We gotta do this,” they said to each other in what Bucci described as a quick call.

During his years on council, Bucci was a strong advocate for the city's businesses and the need to focus on economic development. Both the CIC and Waterfront Corp. were created during his tenure. As CIC funds were depleted after 12 restaurants were helped, Waterfront’s cash infusion supported the next 13..

“This is a difficult time,” Heldorfer said. “Four of us are doing all the prep, cleaning and cooking.” He said working 12 or more hours six days became too stressful, so they cut back to five. “I'm getting older,” he said, while laughing, “I'm not sure I can do this till a vaccine comes out.” He added, “It's been very gratifying, even humbling, how supportive the public has been.

“Our goal is to be there when we get the go-ahead.”