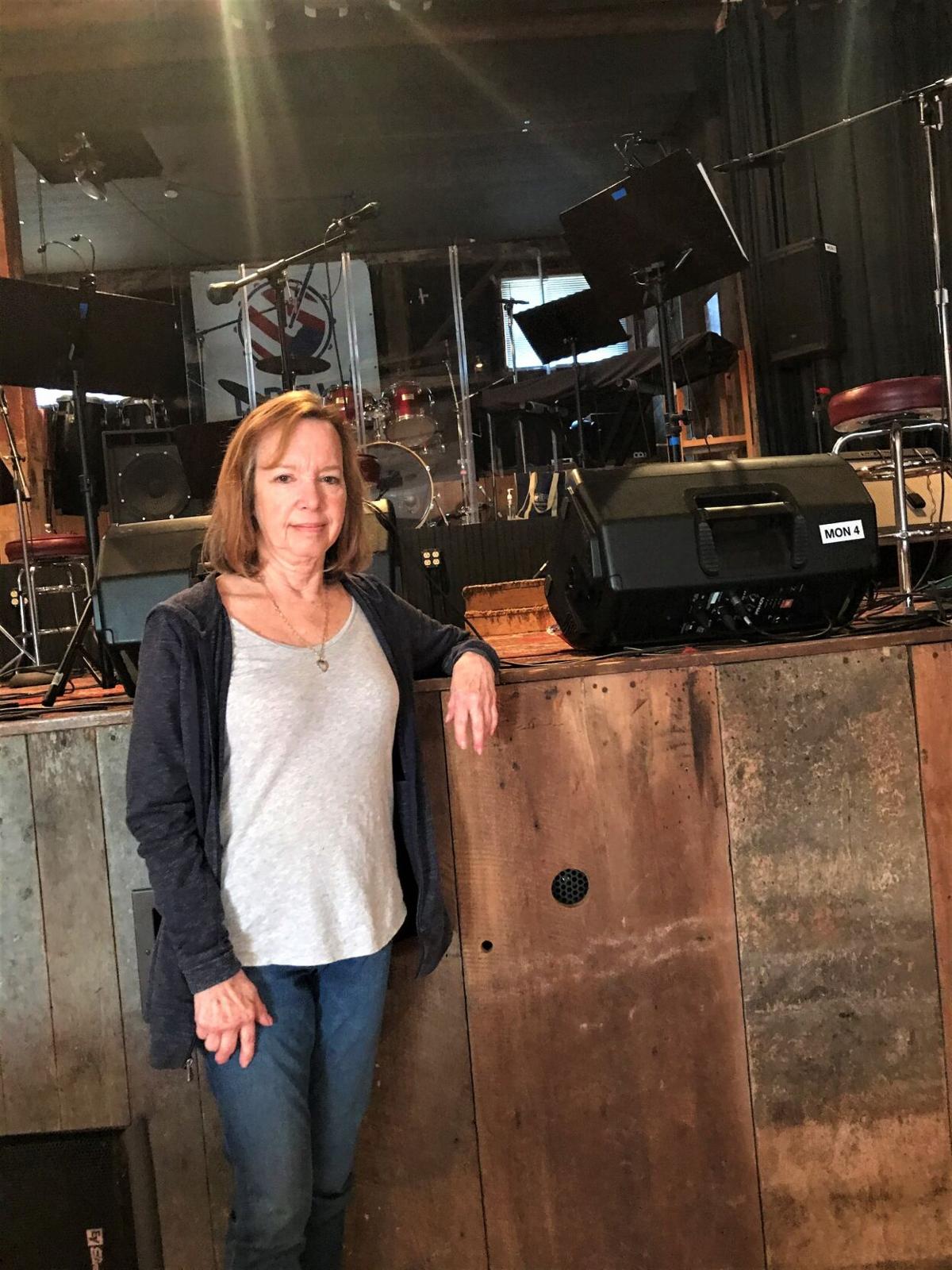 Marilyn Zeidner shows off the stage of Barnegie Hall, which has a seating capacity of approximately 80 inside the hall and 25 more on an outside patio. 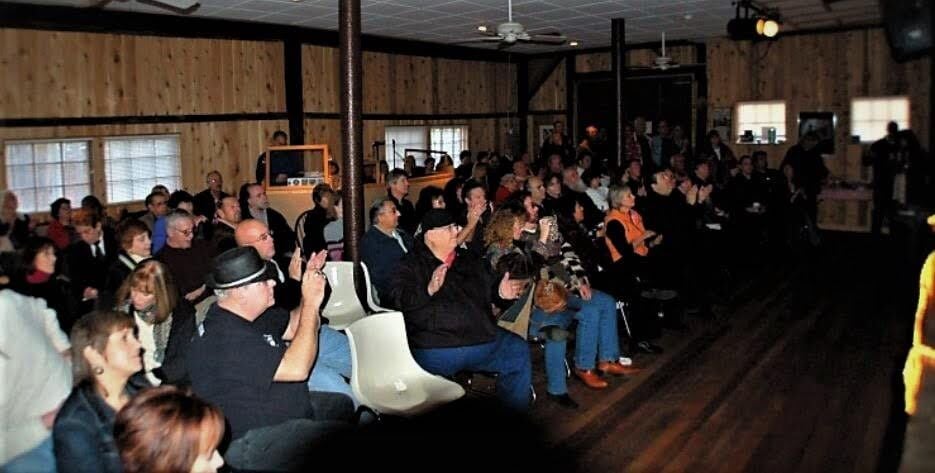 A crowd inside Barnegie Hall applauds performers at one of its many free shows. (Donations are, of course, always accepted.)

Marilyn Zeidner shows off the stage of Barnegie Hall, which has a seating capacity of approximately 80 inside the hall and 25 more on an outside patio.

A crowd inside Barnegie Hall applauds performers at one of its many free shows. (Donations are, of course, always accepted.)

The notion is a cliché, a plot from an old TV show or Judy Garland movie: Let’s put on a show in the barn and make some money!!!

With help and inspiration from friend Lorain County Court of Common Pleas Judge James Miraldi, Marilyn Zeidner, 67, puts on shows in her barn, aka Barnegie Hall, to help raise money for her homegrown charity, Music on a Mission.

Avon Lake City Hall is studying giving Barnegie Hall a unique zoning classification, part of an attempt to create specialized zoning districts throughout the city promoting arts and entertainment, retail and commercial development as well as addressing other specialized activities.

Zeidner doesn’t know precisely when her barn was built, but her home across a driveway from the building at 31950 Krebs Road dates to 1897. The barn’s days as a performance venue started in 2009. Zeidner gives Miraldi credit for the transformation.

“I happened to have attended an outdoor fundraiser with about 50 to 75 people,” the judge said. The event was held on a bright sunny day, but Miraldi felt rain would have ruined the occasion. He started poking around Zeidner’s barn, adding probably 90% of it was filled with all manner of debris.

“But I still thought, you know this could be pretty cool,” Miraldi said, adding a contractor friend visited the property the next day and deemed the barn structurally sound.

“The concert was on a Sunday … and within a week or so we had a crew out there just emptying junk,” Miraldi said, adding it took two weeks to empty the barn of items such as enough scrap metal that, when sold, paid for the workers who cleaned out the structure. Miraldi talked about removing everything from an old tractor to part of a semi-truck buried in the backyard.

Within about a year, Miraldi said the building’s renovations included new electrical wiring and a new roof among other improvements.

“Once we got going with the work, we had a blast,” Miraldi said. “It was like the ‘Little Rascals’ working on a barn.”

Barnegie Hall is not a nonprofit enterprise. Zeidner’s Music on a Mission is a nonprofit headquartered in the hall.

Music on a Mission puts on programs for special-needs children, elder residents and, possibly most importantly to Zeidner, veterans. Zeidner spent 16 years working at the Louis Stokes Cleveland VA Medical Center. Music on a Mission’s signature program is Project D.R.E.W., Delivering Restorative Energy to Our Warriors.

D.R.E.W. is named to honor and memorialize Capt. Drew Ferguson, a Northeast Ohio native who was both a Green Beret and Airborne Ranger who completed combat tours in Iraq and Afghanistan, receiving three Bronze Stars.

The awards are given for unusually heroic service or achievement in a combat zone. Project D.R.E.W. literature describes Ferguson as a painter, poet and musician. He died from suicide in 2017.

The program named for Ferguson pairs groups of veterans with local songwriters. The vets tell their military stories, stories they may have shared with no one else.

“Veterans don’t really like to talk about their experiences,” Zeidner said. “It’s amazing how well they will open up to our songwriters.”

The musicians turn the veterans' memories into songs. Zeidner said many vets memorize their songs, which are recorded and shared on CDs and social media. The idea is to give veterans an outlet for their thoughts.

“I really believe it’s very cathartic for them,” Zeidner said.

A handful of Vietnam vets have taken advantage of D.R.E. W., but Zeidner said the program mostly serves veterans who saw combat in Iraq and elsewhere in the Middle East.

Another Music on a Mission program is Kids in Tune, aimed at children living in shelters, those facing significant physical or cognitive disabilities and those with other challenges. Participants take part in rhyming songs, singing and playing instruments.

Dance to the Music helps people with mobility and developmental impairments, increasing their movement and coordination. Seniors in Symphony takes musicians to older adult living centers and nursing homes. Music focuses on the 1940s, ’50s and ’60s. Zeidner talks about one listener whose caretakers had never heard him speak English, limiting his ability to communicate. As the music played, he began to sing along to the songs… in English.

Zeidner does not sell tickets to Barnegie fundraising shows but does accept donations. There have been some small-scale dramatic performances, but most events are music shows, genres ranging from country to jazz and pop.

“It is a high-quality jewel for Avon Lake to have,” said O’Donnell, who Zeidner described as a regular at Barnegie Hall shows.

Zoning would allow Zeidner to put up signs for Barnegie Hall, among other possible improvements.

Like so many other things, the coronavirus pandemic temporarily shut down Barnegie Hall. Zeidner said future shows will depend on when the state lifts restrictions on the number of people allowed to gather in one spot. Project D.R.E.W. is the only Music on a Mission program that takes place at Barnegie Hall. There are future sessions scheduled because the program sessions consist of small groups.

For more information on Music on a Mission programs or Barnegie Hall shows, visit musicmissioninc.com or call 440-407-0601.

Although my drum no longer beats so loud; I’ll never cease to follow its sound.

Its beat led me through rivers, forests, and sands; equally through disparity’s unforgiving hands.

One day again it will beat proudly a sound, shake down through my body and rattle the ground.

This, is my drum.