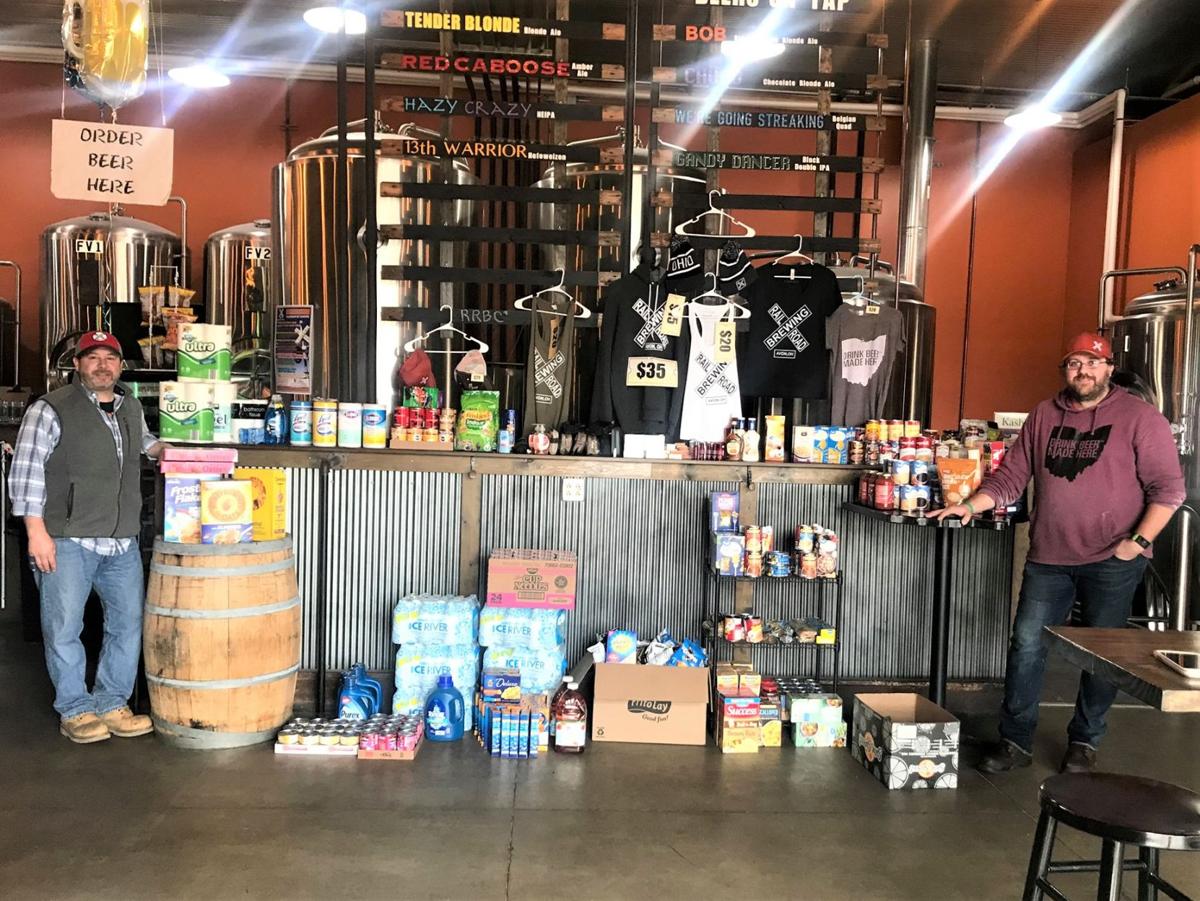 Samantha (left), Janine and Danielle Eynon take a break from selling Girl Scout cookies, making sure as many as possible are donated to Westlake's food pantry. 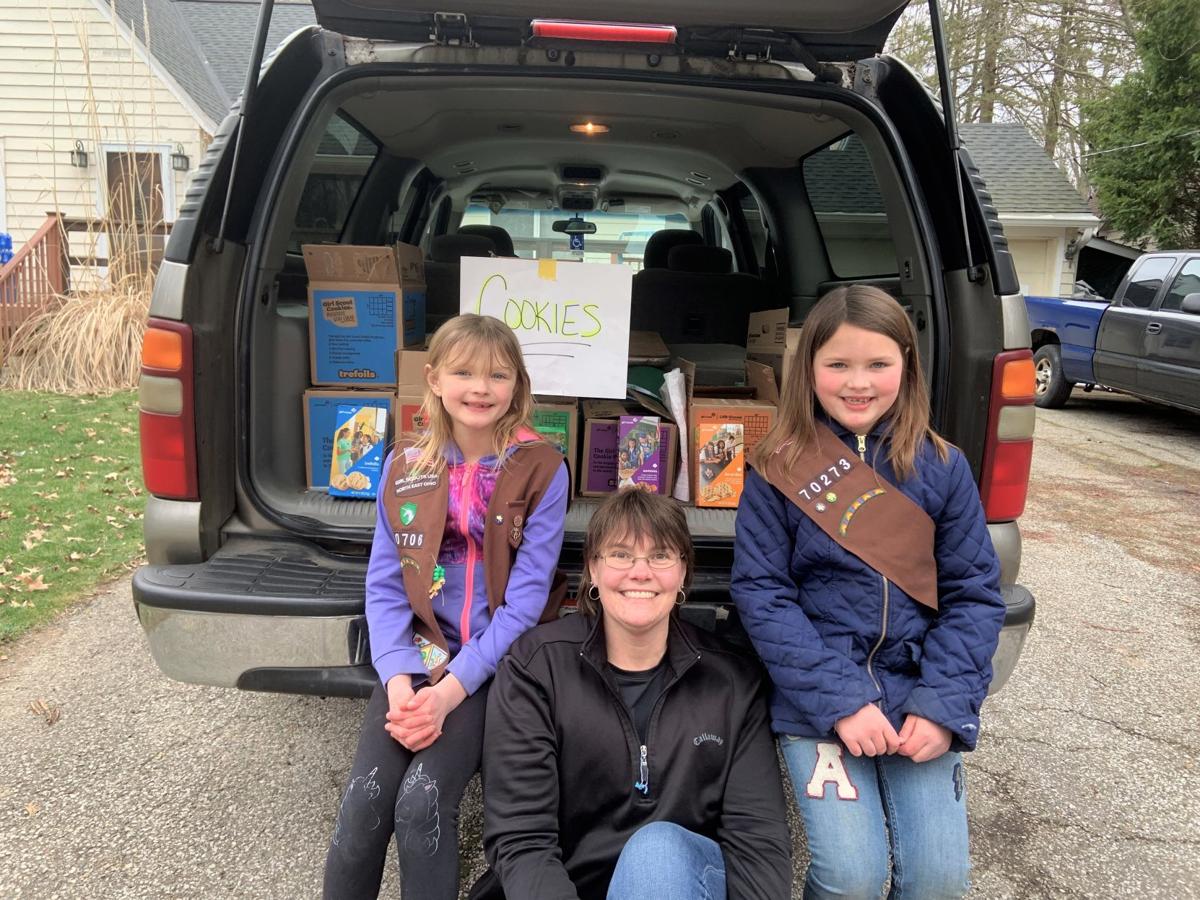 Tom Wagner (left) and Jerome Moore from Avon's Railroad Brewing Co. converted space to store nonperishable food and other items for pickup by food industry personnel currently out of work.

Samantha (left), Janine and Danielle Eynon take a break from selling Girl Scout cookies, making sure as many as possible are donated to Westlake's food pantry.

Tom Wagner (left) and Jerome Moore from Avon's Railroad Brewing Co. converted space to store nonperishable food and other items for pickup by food industry personnel currently out of work.

With hundreds of workers sidelined by business closures, families stressing about creating classroom learning environments at home and life for all in upheaval over coronavirus, kind helpers are determined to bring a little cheer to upended lives.

Anyone driving along Dover Center Road in Westlake may have spotted two adorable little girls wearing their Girl Scout sashes and holding signs to promote their annual cookie sale. They're asking buyers to spend an extra $5 to donate a box to the city's food pantry.

At Railroad Brewing Co. in Avon free nonperishable food, pet food and paper and cleaning products are available for service industry workers affected by Gov. Mike DeWine's order to close restaurants and bars. Brewery partners flooded social media with news of what they're doing, asking for cash or in-kind donations.

On Facebook, young people are offering to do grocery runs for their older neighbors. Strangers call out, “Stay healthy” to a woman walking her dog on the other side of the street.

In Sheffield Lake, a man is urging his neighbors to put their Christmas lights back up to cheer others. It's an effort occurring across the country.

Girl Scout Troop leader Janine Eynon, whose 7- and 9-year-old daughters are Scouts, said the idea to sell cookies to the public from the bottom of their driveway occurred to her as she and the girls pulled a cookie-laden wagon to neighbors who had made pre-sale purchases.

As they walked, they waved and held up signs and cookie boxes at passers-by. They sold 20 boxes.

“That's where I got the idea of let's sit on the sidewalk and see what happens,” Eynon said.

It sounded easier than it actually was. She worried about selling hundreds of boxes after local grocery stores told them they could not sell there this year due to the virus. She also worried about how they could safely sell the cookies. Eynon suffers from asthma and knew she would need to be extremely careful for herself, her children and purchasers. She also wanted some purchases directed to the local food pantry.

Eynon has a container of Clorox wipes nearby, which she uses to clean her hands and the bag handle before touching a box of cookies. She offers a wipe to buyers for extra measure so they can clean their hands as the cookies and money are exchanged.

In two days, they sold 200 boxes and 42 were earmarked for the food pantry. A neighbor offered to let them move operations to his house on the second day because he had a circular drive making it easier for people to stop. She admitted to feeling a little panicky about having so many cookies to sell and no venue to sell them.

Their recent success prompted her offer to sell 100 boxes of cookies for her other daughter's troop. Once the trunk is empty, she may reach out to other local troops experiencing the same challenge.

Tom Wagner is one of four partners running Avon's Railroad Brewing Co. on Avon Belden Road. He said they'd heard some rumors they might get closed down due to coronavirus, but did not realize it would happen so fast.

Wagner has a trucking company and, therefore, another source of income. Plus, brewer Jerome Moore is still at work because the business is permitted to sell beer.

Local brewers, he said, tend to get involved with their community. That has certainly been the case with Railroad, which has hosted a number of fund-raisers for nonprofits during the three years it’s been in business, turning over a portion of sales to assist their work.

On news of the restaurant and bar shutdown order, Wagner said he and partners Moore, Dave Lengyel and Tom Culler decided to help those in the service industry who might not have other sources of income. They used social media to ask for donations of food, pet food and paper and cleaning products.

One of their first donations was from Holy Trinity School. Wagner said the school donated milk, cheese and other fresh food items from its kitchen. Others provided cash that allowed the partners to visit a nearby store to make purchases. A copy of the store receipt was sent to the donor to assure them their donation had been spent properly and would be put to good use.

As Wagner spoke to West Life by phone, he noted that cars were coming in to pick up donated goods. He said they would evaluate the situation in 30 days to determine next steps. In the meantime, he has been in contact with other brewery owners about taking donations to their locations so those needing help would have easy access. Anything left at the end of the crisis will be donated to a local food bank, he said.

Those interested in donating can check out the brewery’s Facebook page or call 440-723-8234 to make arrangements. Railroad is open from 10 a.m.- 6 p.m. daily so customers can purchase growler fills, gift certificates, merchandise and kegs to go.

Help offered in many forms

Lydia Gadd, director of Westlake Senior and Community Services, said she'd heard many stories about the community pulling together.

“One resident talked about neighbors she has had for years, but never spoke to or even made eye contact with who came to her door offering to bring her groceries,” Gadd said. Another shared that a young man “paid it forward” at the grocery store.

She said people are offering to deliver food and supplies for the center, which is maintaining operations, although it is closed to the public and all programming is suspended. “We are so grateful, as we are hearing from more people with need,” she said.

“Kudos to this Girl Scout troop mom, and everyone else out there who finds creative ways to help. While there is a great deal of fear and anxiety out in our world, there is also a great deal of positive action and unity. It is very gratifying.”