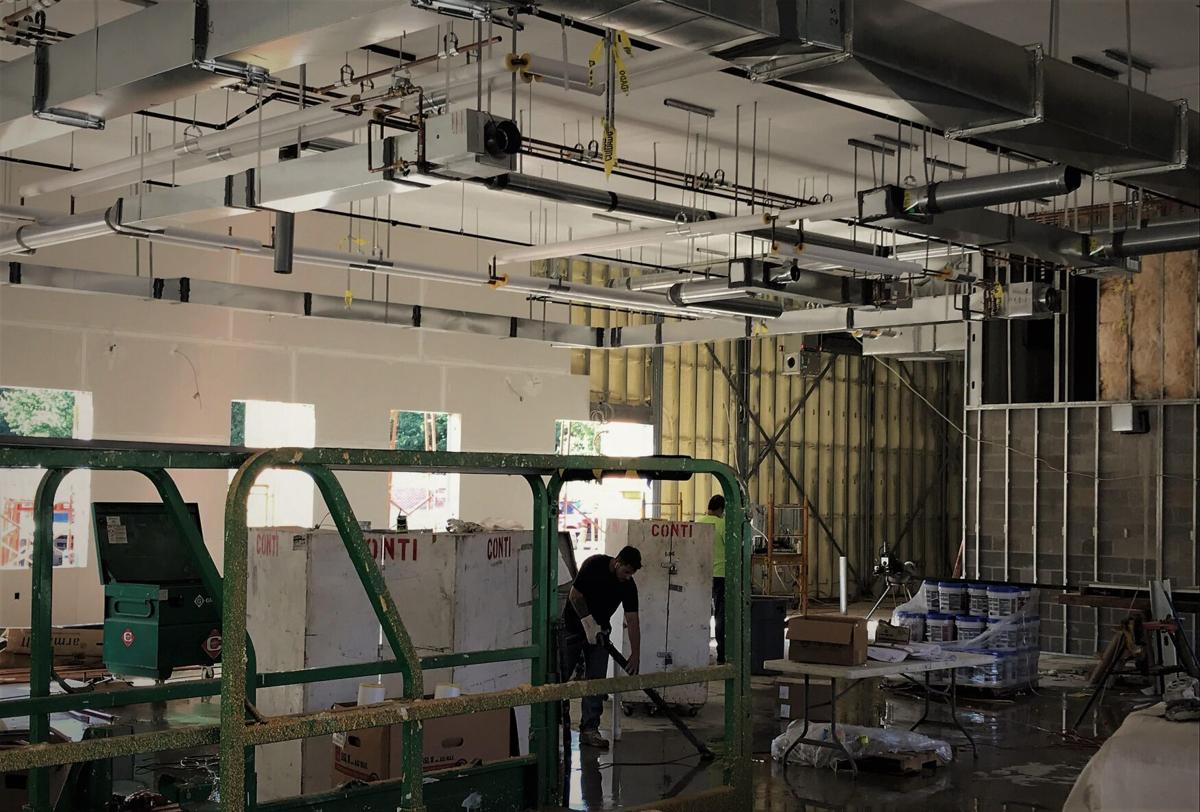 Numerous rooms and spaces are rising all around the central courtyard of the new Community Services Center on Hilliard Boulevard. 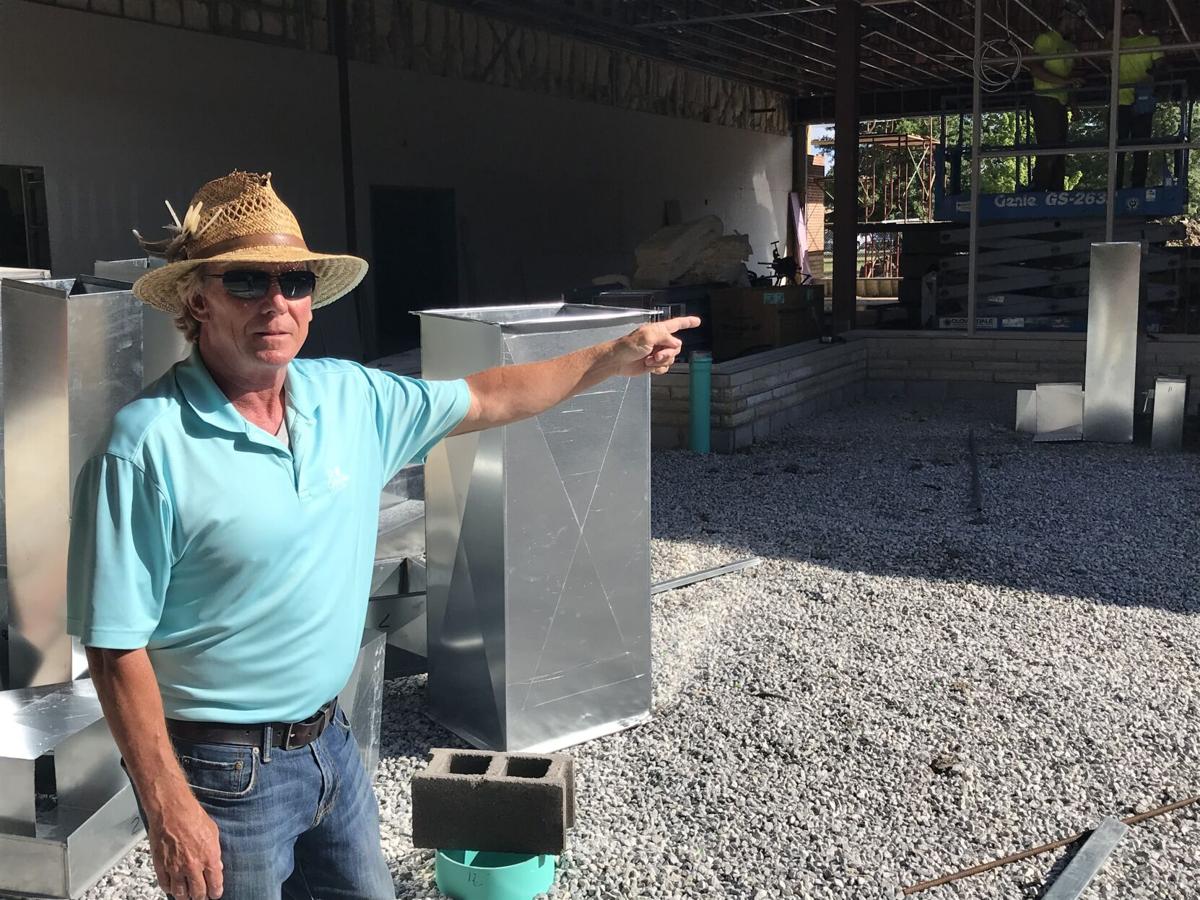 Westlake Chief Engineer Robert Kelly points to one of the features inside the new center while conducting a tour of the rapidly rising building.

Numerous rooms and spaces are rising all around the central courtyard of the new Community Services Center on Hilliard Boulevard.

Westlake Chief Engineer Robert Kelly points to one of the features inside the new center while conducting a tour of the rapidly rising building.

If you are looking for some sort of silver lining, something, anything positive to come out of the coronavirus pandemic, the city of Westlake has just the thing.

Work on the city’s new $12 million community services center is ahead of schedule because contractor Mike Coates Construction Co. brought in additional workers from out of state, Clough said, although he did not have a new timetable for completion.

City Engineer Robert Kelly is shepherding the project for the city. During a tour of the facility near the end of July, Kelly said the project, which launched in October 2019, could be finished as soon as five months early. Contractors have until May 2021 to finish. But construction conceivably could be done by the end of 2020.

“It’s all because of COVID,” Kelly continued, adding that Coates, based in Niles, Ohio, transferred 20 to 30 workers to the Westlake site. “Things are moving very fast.”

The heart of the building will be an indoor, glass-walled courtyard, in the middle of the center.

Traffic flowing in and out of the center’s various spaces, ranging from classrooms to exercise rooms to a cafeteria and a 180-capacity amphitheater, all will flow into a hallway surrounding the courtyard. Kelly said the idea is to keep the building open and airy, but also allow staff and visitors to keep an eye on the center’s more fragile visitors.

The courtyard itself will contain benches, chairs and tables for socializing.

Visitors will enter through the front of the building, which roughly faces the neighboring Westlake City Recreation Center, 28955 Hilliard Blvd. A lobby sits to the left of the main entrance and allows staff a clear sight line down two of the building’s main hallways. Kelly said the intention is once more to allow greater visibility of visitors.

“Everything is in a circle. … if someone trips or falls or whatever,” he said, “someone is very likely to notice that.”

Kelly added the design deliberately reduces the distance seniors need to walk inside the building and makes various rooms easy to locate. He pointed out numerous other features of the quickly rising building. An arts and crafts room can hold up to 25 people. There is another classroom dedicated to personal computers. Exercise rooms are near the back of the structure. Two bocce ball courts are slated for just outside the right side of the building.

A small snack shop featuring coffee, small sandwiches and munchies will be near the front entrance. Exercise rooms will contain the usual free weights and exercise machines. Yet another room will be dedicated to yoga.

The center will include at least two medical evaluation rooms, providing routine services such as blood pressure checks and comparable care.

The cafeteria/social space near the generously appointed kitchen can be split into two by a movable wall, depending on the occasion.

For the most part, the inside of the building is still a shell. Workers, between 30 and 50 a day on average, still are building walls and ceilings. Some plumbing and electrical work is being done, but much remains unfinished. The contractor hopes to have the building sealed off before the arrival of colder weather, allowing his workers to continue construction.

Kelly several times mentioned Coates uses only union workers, making union pay. He also said there have been no work-related accidents at the site. Employees have temperatures checked at the beginning of every workday. No cases of COVID-19 have surfaced at the jobsite. While the pandemic may well aid the progress of the project in the long run, Kelly said it slowed arrival of some construction materials, perhaps most notably glass intended for the walls of the courtyard and elsewhere.

Outside the structure, 175 parking spaces will be available. There also will be an overflow lot. Exterior walls consist of horizontally and vertically placed bricks.

A walkway will run from the front of the community center to the recreation center.

One other noticeable exterior feature will be the lack of almost any HVAC equipment on the roof. Instead, heating and cooling systems along with similar equipment are all inside the structure to add to the aesthetics of the exterior.