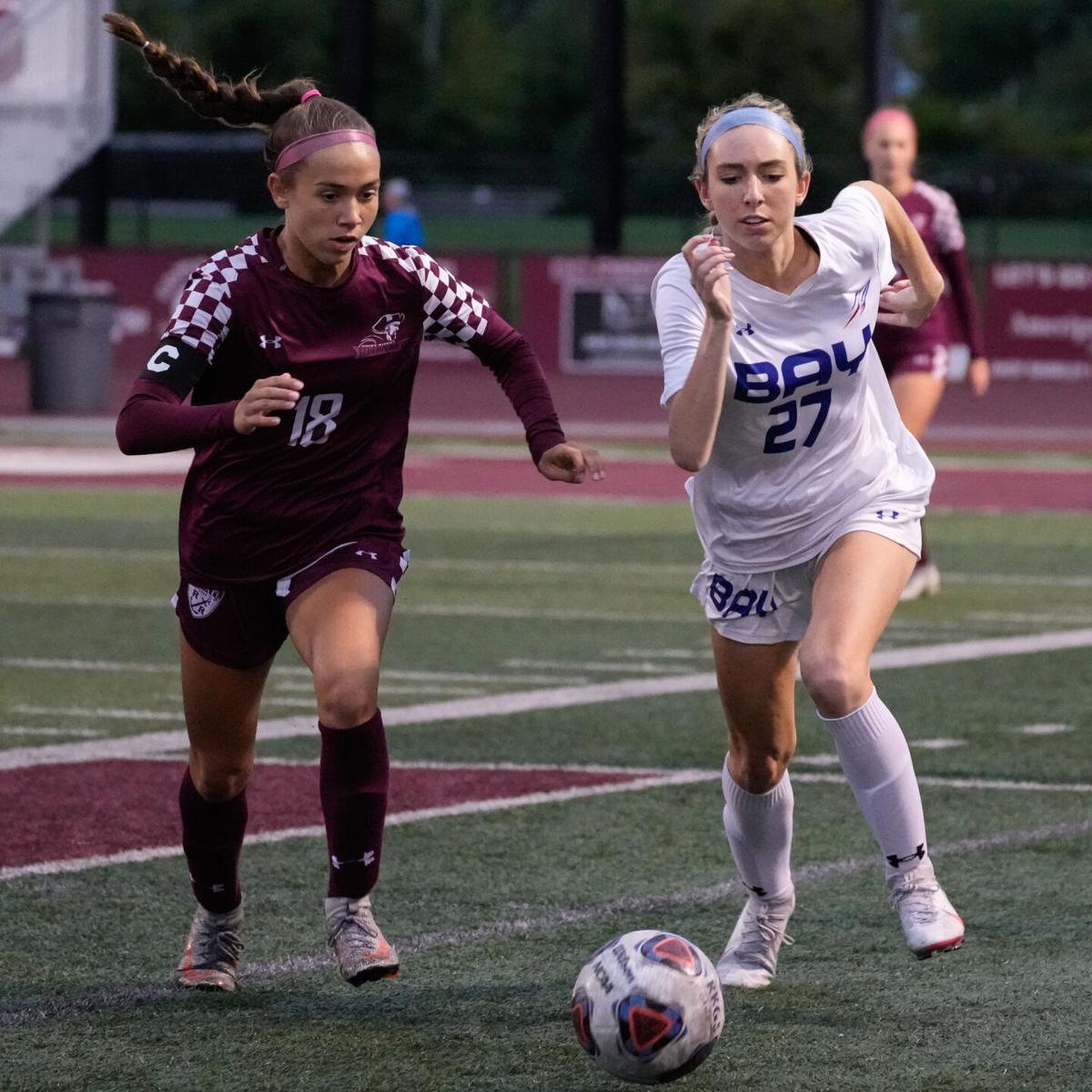 The Rocky River girls soccer team had won seven straight games before rival Bay came to town on Sept. 22 and pulled out a 2-0 win. It was only the second time all season the Pirates had allowed more than one goal in a game. 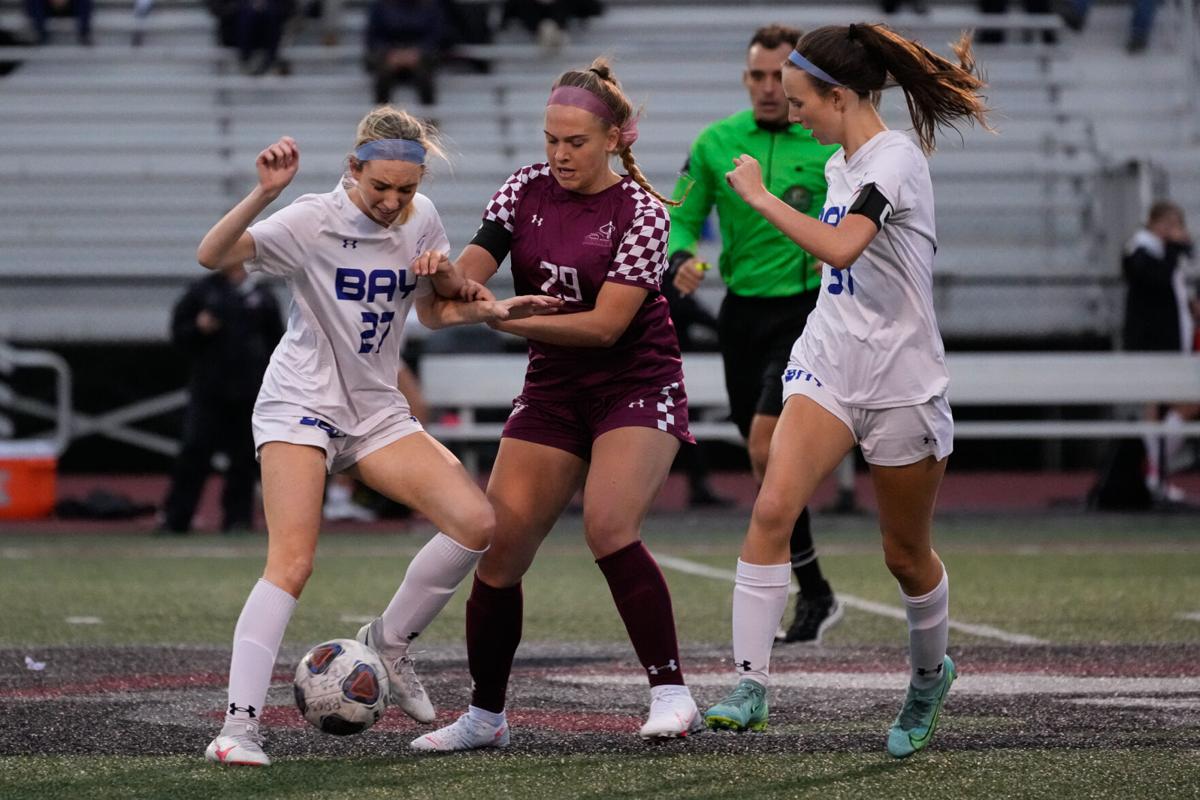 The Rocky River girls soccer team had won seven straight games before rival Bay came to town on Sept. 22 and pulled out a 2-0 win. It was only the second time all season the Pirates had allowed more than one goal in a game.

For nearly the first 30 minutes of a Great Lakes Conference clash between the Bay Rockets and host Rocky River Pirates on Sept. 22, the Pirates controlled the possession, created nearly all the offensive opportunities between both teams and gave the Rockets little room to create meaningful attacks.

But in the 29th minute, after finding the ball deep in River’s box, junior Lily Frey took advantage of the keeper being out of position and found the back of the net to put the Pirates up 1-0. Just nine minutes later, freshman Tessa Knapp curled a ball into the upper right corner to double the advantage to 2-0.

That was all the breathing room the Rockets needed as tight defense from the back line and miscued passes and opportunities from the Pirates allowed them to hang on for the upset win. The loss is just the third for the Pirates since falling in last year’s state semi-finals.

“We always come in stressed out with Rocky River,” English said. “It’s a big conference game, big rivalry and, I think, after they scored that goal, it kind of relaxed them. We didn’t play our best game tonight. It was a lot of kickball but that’s OK.”

Knapp praised her teammates for keeping the ball moving and putting her in an opportunity where she could net the team’s second goal.

“We had a good buildup as a team and we were passing and connecting good which led to an opportunity and an open shot,” Knapp said. “It’s definitely good to get the first goal because it gets our momentum up and led to us scoring another goal right away.”

Despite the goal disparity, River (7-2, 1-1 Great Lakes Conference West Division) kept the attacking pressure on the Rockets (6-1-2, 2-0 GLC West) throughout the remainder of the game. The Pirates came out in the second half peppering the net with shots on goal, many of them, admittedly, being easy saves for the Bay keeper.

In the 68th minute, a well-placed Pirate free kick also was, ultimately, directed right at the keeper. In the waning minutes, the Pirates also had a chance in the 77th with an open net – the kick went wide left – and in the 78th, but the ball hit off the left post.

Pirates coach Patrick Hopkins said what was missing the most was his girls’ ability to finish the close runs they had throughout the game.

“Bay is always a difficult opponent. There’s always more to this matchup emotionally and everything,” Hopkins said. “We only gave up three or four shots total throughout the game and they put two in. Our attack mentality, we didn’t go at them as we have been going at teams earlier in the year. Someone just needed to take it right at them. We did that at a later time in the game … it’s just always a tough game with Bay.”

He didn’t take anything away from Bay’s efforts and their abilities to capitalize on chances that presented themselves.

“(The first goal) was a situation where we didn’t clear the ball out, made a mistake, put it in the back of the net and went up 1-0,” Hopkins said. “Their second goal, we played the ball to the middle, she got the ball, turned and hit a beautiful shot. We should have closed down on it a little bit sooner. To only give them three or four shots, that was part of the success.”

Just after the opening goal, Bay had an opportunity in the 30thh minute that sailed just left from about 20 yards out. And right before halftime, already ahead 2-0, the Rockets couldn’t convert on an opportunity inside River’s box in the 40th minute.

In the 60th, Knapp beat the last River attacker and was one-on-one with the keeper but sent the shot just wide of the net. Knapp found herself one more opportunity in the 72nd, once again inside River’s box, but the Pirates defense cleared it.

“(Our team is) building and we talked about that this week,” English said. “We just beat Revere the other day both (Revere and Rocky River are) ranked. I told them (that) it’s going to come and this is the time. We’re more than halfway through the season and this is where we build to October.”

Moving forward, after playing Lake Catholic on Monday, the Rockets host Elyria Catholic tonight before traveling to Chagrin Falls on Saturday and coming back home to play North Olmsted on Oct. 6.