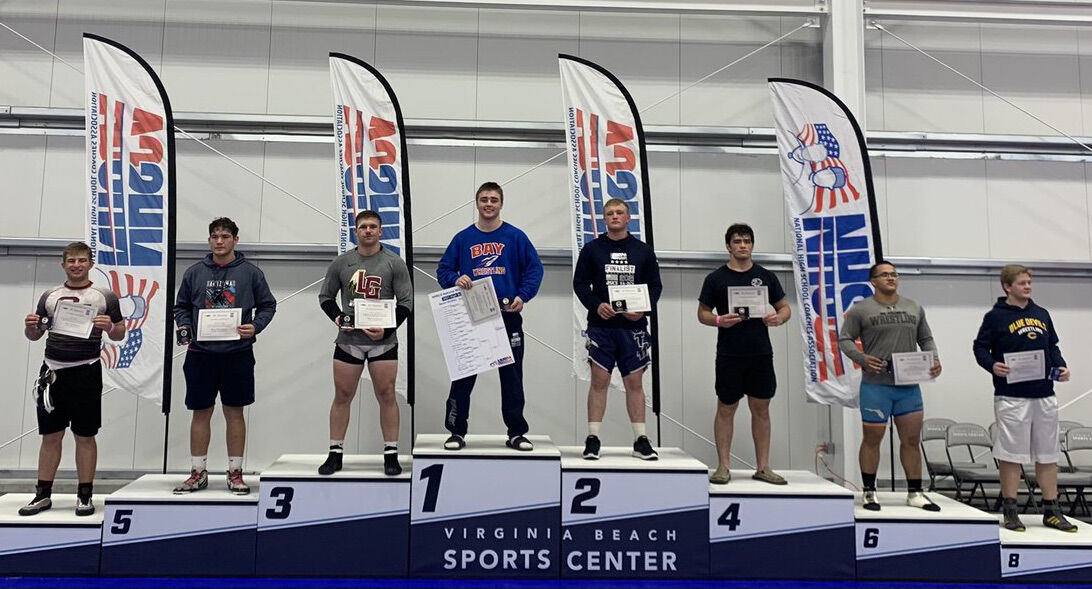 Bay senior Mason Cover can call himself a national champion after winning the 220-pound weight class at the National High School Coaches Association tournament in Virginia Beach on April 25. 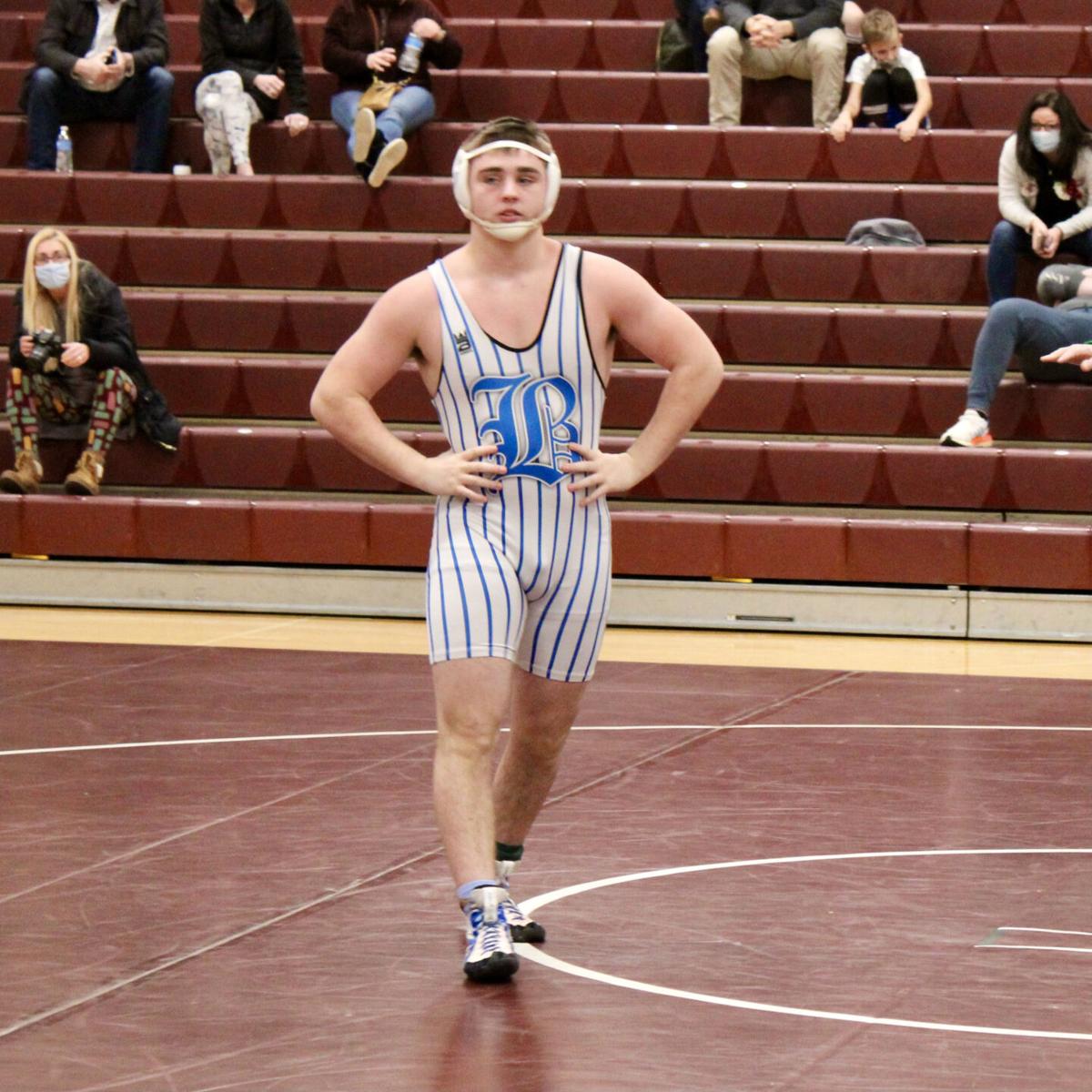 Mason Cover’s final high school season as a Rocket was a decorated one. He went undefeated until losing a Division II district final match, eventually finishing his senior campaign 48-4. He advanced to the state tournament for the first time, finishing eighth in the 220-pound weight class.

Bay senior Mason Cover can call himself a national champion after winning the 220-pound weight class at the National High School Coaches Association tournament in Virginia Beach on April 25.

Mason Cover’s final high school season as a Rocket was a decorated one. He went undefeated until losing a Division II district final match, eventually finishing his senior campaign 48-4. He advanced to the state tournament for the first time, finishing eighth in the 220-pound weight class.

At some point in the near future, the magnitude of the accomplishment might sink in for Mason Cover.

When that moment will be is anybody’s guess, though. The Bay senior still can’t believe he’s a national champion wrestler.

Competing at the 32nd Annual National High School Coaches Association Senior tournament at the Virginia Beach Sports Center on April 23-25, he outgrappled some of the best talent in the country and won his 220-pound weight class.

“I would probably say it’s one of the best feelings I’ve ever had, at any wrestling tournament I’ve ever been to,” Cover said.

It would be hard to blame him for a high level of satisfaction. Tournament brackets were broken down by class, so seniors were only matched up against other seniors. In order to win the title, Cover had to get by individuals who’d placed in their state tournaments back home, some on multiple occasions.

In the first round, he pinned Tyler Benjamin of Owego, NY, in 1:55. In the quarterfinals, he outlasted Joshua Evans of Seaford, VA, in a 3-1 sudden victory. Evans is a two-time state runner-up in Virginia.

He rolled in his semifinal match against a state champion in Tristan Middlebrook of Lakeland, FL, winning by pinfall in 54 seconds. Then in the final on April 25, on a mat surrounded by coaches and wrestlers from around the country, Cover won his weight class with a 5-4 decision over a four-time state finalist and two-time Utah state champion in Macintyre Thacker, from Altamont, UT.

“That’s some tough kids,” said Mason’s father, Ryan, who also coaches the Rockets varsity team. “He just wrestled loose...You’re away from home. There’s no pressure, no big deal. He just kind of wrestled free, and I think it may be the best he’s wrestled in his entire high school career, to be honest with you.”

Once Mason got past Middlebrook in the semifinal, he almost felt as if he was playing with house money. Simply getting to the final was a huge accomplishment after making the trip to the same tournament as a freshman and sophomore and going 0-2 each time.

“It was extremely cool,” Mason said. “The last time I went down there (in 2019) I went 0-2. I drew the first seed in my first match and got worked pretty badly, then dropped to (the consolation bracket) and got worked again pretty badly. So to come back here after two years and coming out on top feels amazing.”

Mason’s improvement came to the surprise of no one who’d been watching his work habits on and off the mat over the course of the last year. Determined to reach the Ohio High School Athletic Association state tournament in March, he used the extra time granted due to the shutdowns caused by the COVID-19 pandemic in 2020 and hit the weights hard, bulking up to move from 182 pounds to 220.

Ryan cleared out part of his office and put mats down so Mason and older brother, Matt, a former Rockets standout and 197-pounder at Princeton University, could wrestle each other in the lead-up to the 2020-21 season.

The results were staggering. Mason went undefeated for most of the season, winning Great Lakes Conference and Division II sectional championships along the way. He lost his first match of the year in the district final to the same opponent he beat the week before for the sectional, then advanced to state and placed eighth at Marengo Highland High School.

“It was pretty awesome to watch him,” Ryan said.

What comes after a national title? For Mason, plenty.

The day after returning home from Virginia Beach, he got back in the gym, preparing for various tournaments scheduled this summer. He also has college to look forward to, where he’ll continue to wrestle for Cleveland State University.

His goal is to bulk up once again and make the leap from 220 to heavyweight. He’s been working out between three and five days a week at Prescription Fitness in Bay Village, has been watching his diet and has been getting practice time in at Elyria, Brecksville-Broadview Heights and Shaker Heights high schools on different days of the week.

“I just have to keep getting the protein shakes, keep eating and keep lifting and training,” Mason said. “If I can do that, I think I’ll be able to get up to 235, 240.”

A national championship isn’t stopping Mason’s desire to get bigger and better.