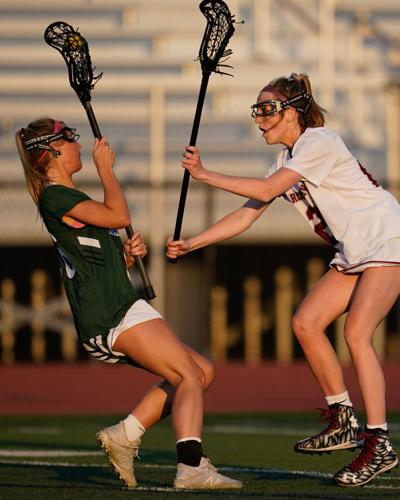 With one game left in the regular season, the Rocky River girls lacrosse team has held 15 opponents to a total of 63 goals, the lowest in recent memory. Defense has driven the Pirates to a 13-2 record thus far. 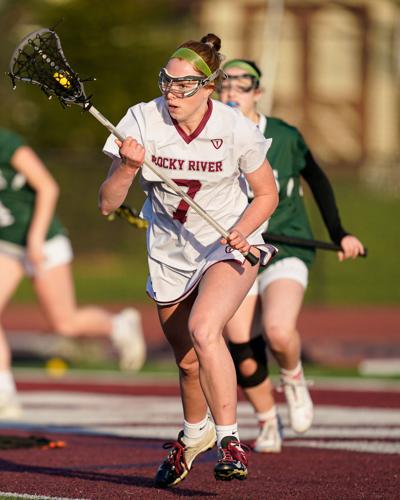 Senior defender Ella Russell and her Pirates teammates on the back line have helped cause 214 turnovers this season.

With one game left in the regular season, the Rocky River girls lacrosse team has held 15 opponents to a total of 63 goals, the lowest in recent memory. Defense has driven the Pirates to a 13-2 record thus far.

Senior defender Ella Russell and her Pirates teammates on the back line have helped cause 214 turnovers this season.

Chasing every ground ball. Marauding around the net like a pack of wolves to surround opposing attackers before they can get off a clean shot. Applying waves of pressure across the field and forcing turnovers.

It’s become the Pirates’ calling card during a season that started with heightened expectations.

If there was a question in early March about how they could improve upon a 2021 season in which they played for the Division II state championship, they’ve answered with a defense that doesn’t quit.

“When the defense is playing well, the rest of the team plays better,” said Pirates senior defender Madeline Lundin. “When we’re going as hard as we can, you can see that throughout the entire team.”

The Pirates are 13-2 this season, their best record since 2018, and they won their first Northern Ohio Lacrosse League title with a 17-2 victory over Westlake on May 2 that bumped their league mark to 8-0.

With 13 returning players, they expected to be in the thick of the NOLL race and compete once again for a Division II, Region 5 title later this month. But they’ve been so stifling at times they’ve even surprised themselves.

Three of their wins have been shutouts. Until this season, they hadn’t blanked an opponent since May 2017. Based solely on goals allowed, the 63 scored against the Pirates so far are the fewest since 2011 when they let in 93.

“We lost a lot of great seniors last year so, personally, I didn’t think we’d be this strong,” senior defender Kayln Scalabrino said. “To have three shutout games this season is great. I’ve never been involved in a shutout in any season. It’s great for our senior year to do these things and accomplish these milestones we’ve been working for.”

According to high school sports website Max Preps, the national average for goals allowed per game is 9.6. The Pirates’ average sat at 4.0 entering this week. Their final regular season game will take place tonight at 7 at Hawken School in Gates Mills.

In the two seasons since coach Colleen Hile took over the program, she’s gradually worked in the high-pressure zone defense the team is currently riding to one of the state’s best marks in Division II. The Pirates attack the ball at both ends of the field, but when an opponent is in the offensive half, the Pirates will play a zone that relies on quick feet and occasional gambling as they rush to cover the ball, which carries the risk of leaving another girl open.

That’s why trust has played an important role in their success.

“You have to be willing to put yourself in an uncomfortable situation where if you go out and pressure, maybe they beat you or maybe they don’t,” Scalabrino said. “We communicate really well as a defense, and we’ve grown into the defense that we’ve been able to play.”

To maintain such effort for 50 minutes, the Pirates have doubled down on conditioning and agility training. Hile and her staff have worked it into every practice since before the season began, and it’s paid dividends as the Pirates never seem to tire while pursuing the ball.

On the rare occasions where they do get beaten to the net, they have senior goalie Hannah Burgess to stop shots. Nicknamed “The Queen” by her teammates, she’s made 66 saves.

In the win over a Westlake team that featured numerous scoring threats and averaged nine goals per game, the Pirates held them to five shots and caused 25 turnovers. Defense fueled their own 17-goal explosion where 10 different players scored.

“Westlake had really quick cutters and are a really athletic team, so we had to go out hard,” Lundin said. “Even if we had to go really hard for 2-3 minutes, (our effort) really showed, and we’d get turnovers and get the ball back.”

It was the type of all-encompassing win the Pirates may not have been able to pull off a year ago. Scalabrino and Lundin noted that there were times when they were a step slow and would rack up foul calls when they weren’t fast enough on their feet to get in front of an opposing player. They rounded into form and made a run to state, but finished the season 15-7 and allowed 176 goals. In 2019, they were 12-8 with 200 goals allowed.

Hile, an aggressive defender during her high school days at Worthington Kilbourne in Columbus before graduating in 2011, has enjoyed watching her Pirates excel at her preferred style.

“They’ve definitely taken it into their own,” she said. “They’ve taken it to a place I didn’t expect, and they’re really proud to go out and play it, which is fantastic to see for my little defensive heart. I’m cheering for them as someone who wasn’t as talented as they are, but who had the same heart and soul that they do.”

The state boys and girls lacrosse tournaments will begin with play-in games on Saturday. Locally, first-round matchups include: