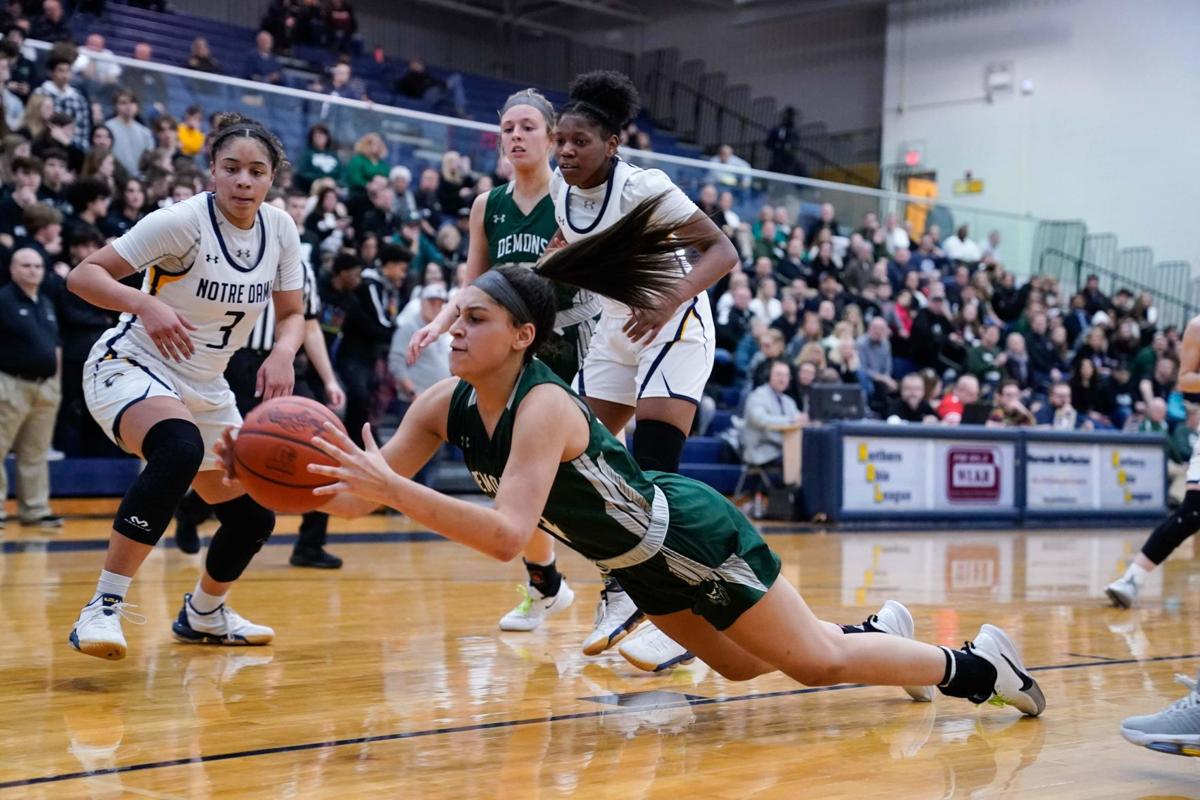 Westlake senior Abby Carrington dives for a loose ball against Toledo Notre Dame Academy at Norwalk High School on Mar. 4. Carrington had a team-high 11 points in the Demons' 51-26 loss. 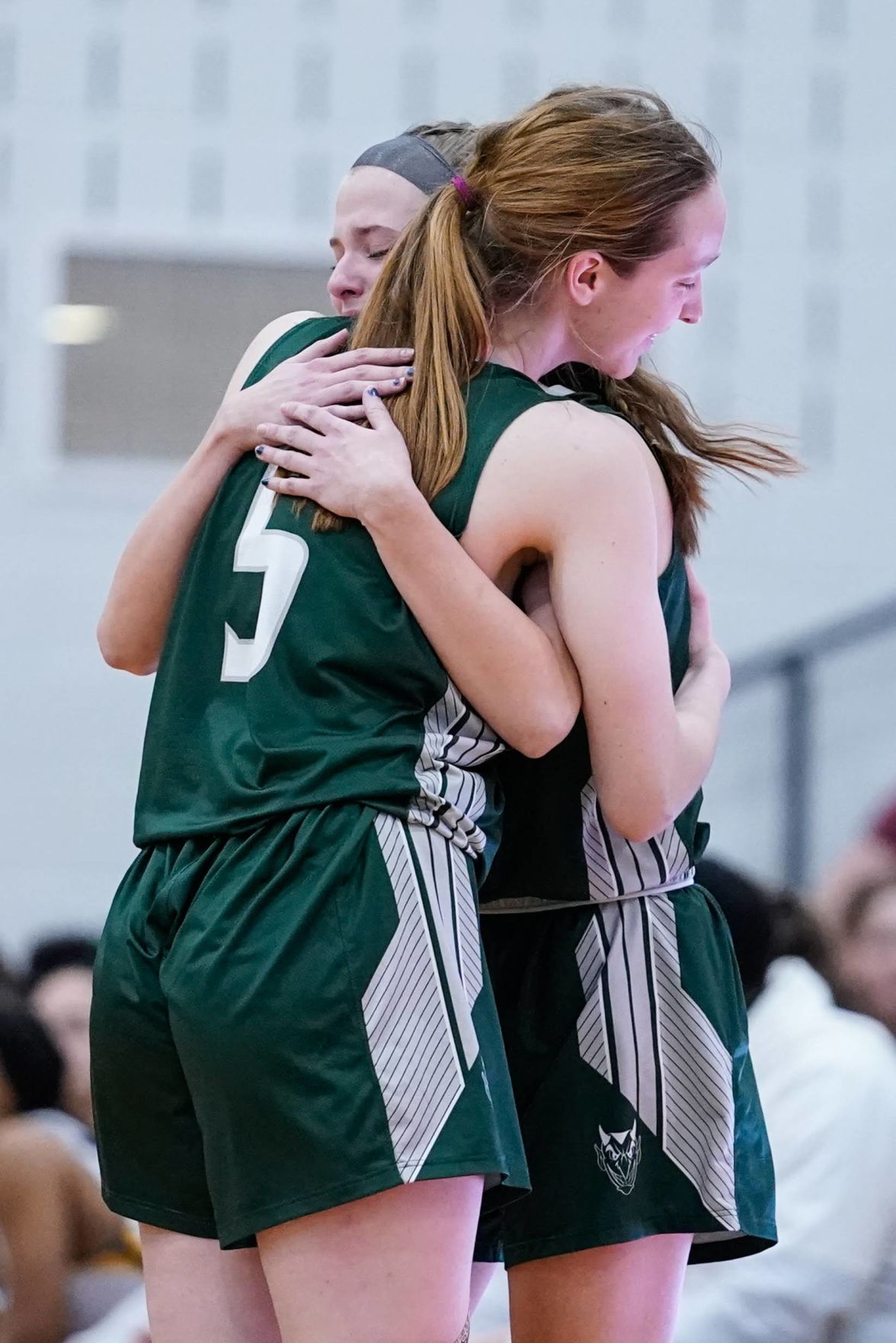 Demons players embrace coming off the court during their regional semifinal loss to the Eagles. Five seniors played their final game for Westlake on Mar. 4.

Westlake senior Abby Carrington dives for a loose ball against Toledo Notre Dame Academy at Norwalk High School on Mar. 4. Carrington had a team-high 11 points in the Demons' 51-26 loss.

Demons players embrace coming off the court during their regional semifinal loss to the Eagles. Five seniors played their final game for Westlake on Mar. 4.

Going up against the Eagles in a Division I regional semifinal, Westlake fell far behind in the second after a 10-0 Notre Dame run to start the quarter. Even with a hot start to the third, the Demons couldn’t overcome Notre Dame’s powerful offense and their own cold shooting night and fell 51-26.

“I thought we had a good plan coming in for how to handle the ball pressure but you can plan for it as much as you possibly can and (then) when you get here, it’s different,” Westlake coach Karen Swanson Haan said. “We struggled to get into our offense to begin the game. With great defense, you can make someone have an off night. I thought they shot the ball well, we didn’t seem to necessarily shoot it very well.”

Despite those struggles, Westlake came out firing in the first quarter. A quick 3-pointer from senior Abby Carrington sent the home-court-like Westlake stands into a frenzy and led 7-2 early. Carrington and other Demons continued to get open looks from 3-point range, but couldn’t get the lid off the basket. In the first half, Westlake was 2-of-12 from three and 5-of-24 overall.

As would be a theme throughout the game, Notre Dame’s Grace VanSlooten established herself as a dominant presence down low. The 6’2” sophomore had eight points on 4-of-7 shooting in the first quarter and finished with 17 points, 14 rebounds, four assists and three blocks. Two other Eagles (Julia Webb - 13 points and Ray Armstrong - 12 points) finished in double-figures.

“She’s quite a talent, there’s no doubt about it,” Swanson Haan said. “I thought we had a good plan for her. We executed it for the most part. I thought Stephanie Randar did a great job on her. VanSlooten had (17) and I thought she really had to work for every single one of them.”

Westlake was held to just five points in the second quarter on 2-of-14 shooting and trailed 28-13 at halftime. The Demons were in desperate need of an answer to both VanSlooten and their cold touch from behind the arc.

At the start of the third, they seemed to find one of those answers as Carrington and Summer Salem combined for nine points on three-consecutive 3-pointers. That 9-2 run cut the lead to just eight points 2:15 into the quarter. That was as close as Westlake got and as many points as they scored in the quarter.

“We cut it down, and it seemed like every time we’d go on a roll, (Notre Dame) would have an answer,” Swanson Haan said. “That’s what great teams do. That’s a very good team right there. It’s a game of momentum and we never quite got the wave that we needed.”

From that point on, the Demons finished the game 0-for-16, with their last four points coming on Gina Adams free throws, her only points of the night. Carrington finished with a team-high 11 points and added seven rebounds. Adams and Salem each had four points for Westlake, with Adams also picking up three assists and six steals.

“I definitely feel like the shots (just) weren’t falling,” Carrington said. “Shots don’t fall sometimes and it’s OK as long as we say we worked our hardest, that’s the only thing that matters. We satisfied with the fact that we left a mark on Westlake girls basketball and it’s sad, but we’re happy at the same time. It’s a bittersweet moment for us.”

After a four-year wait, the Demons claimed both a split of the Southwestern Conference title with Olmsted Falls and a district championship with a victory over SWC rival Amherst. During the regular season, Westlake lost just three games, with only one coming in Ohio (a two-point loss against Olmsted Falls). The other two came in Florida while the team traveled to the Tampa Bay Christmas Invitational during winter break.

“These five have left their legacy, I’ll tell ya,” Swanson Haan said. “Quite a mark on Westlake girls basketball and it’s one we hope to latch on to and carry on well into the future. They’ve played their hearts out. An incredible four years for all of them. I can’t say enough about everyone.”