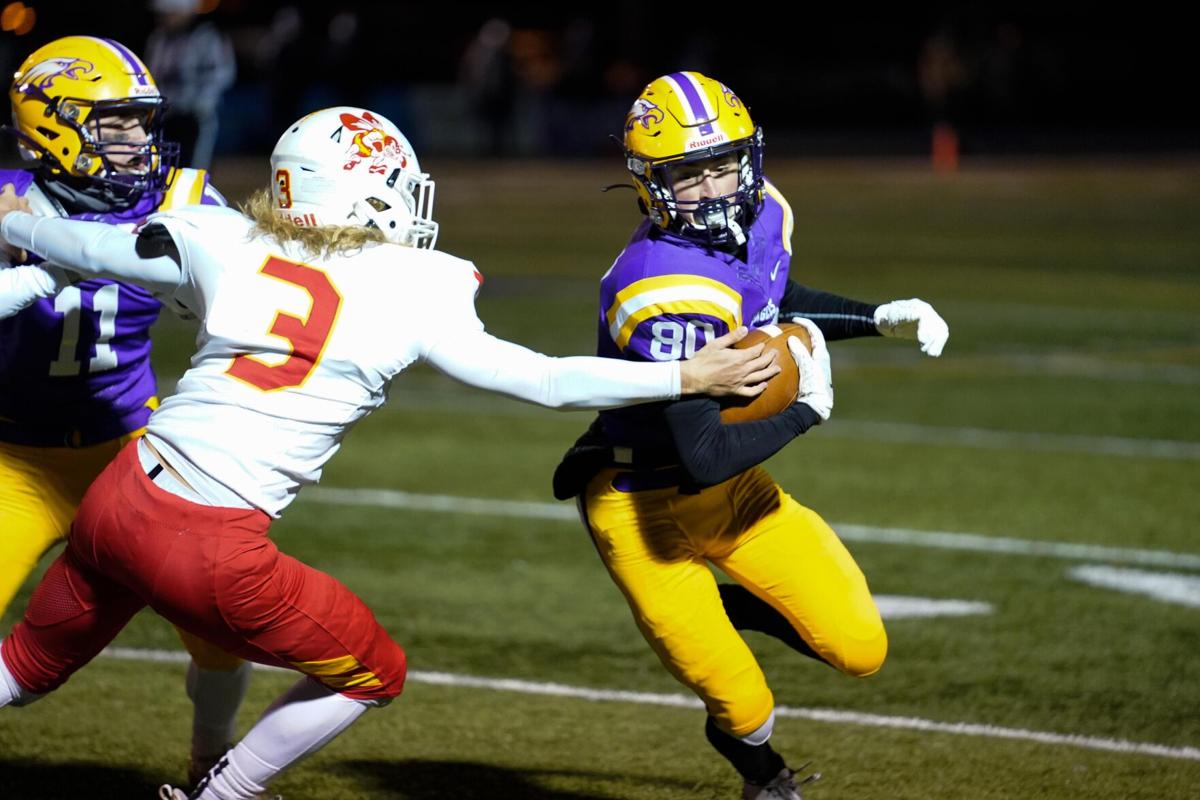 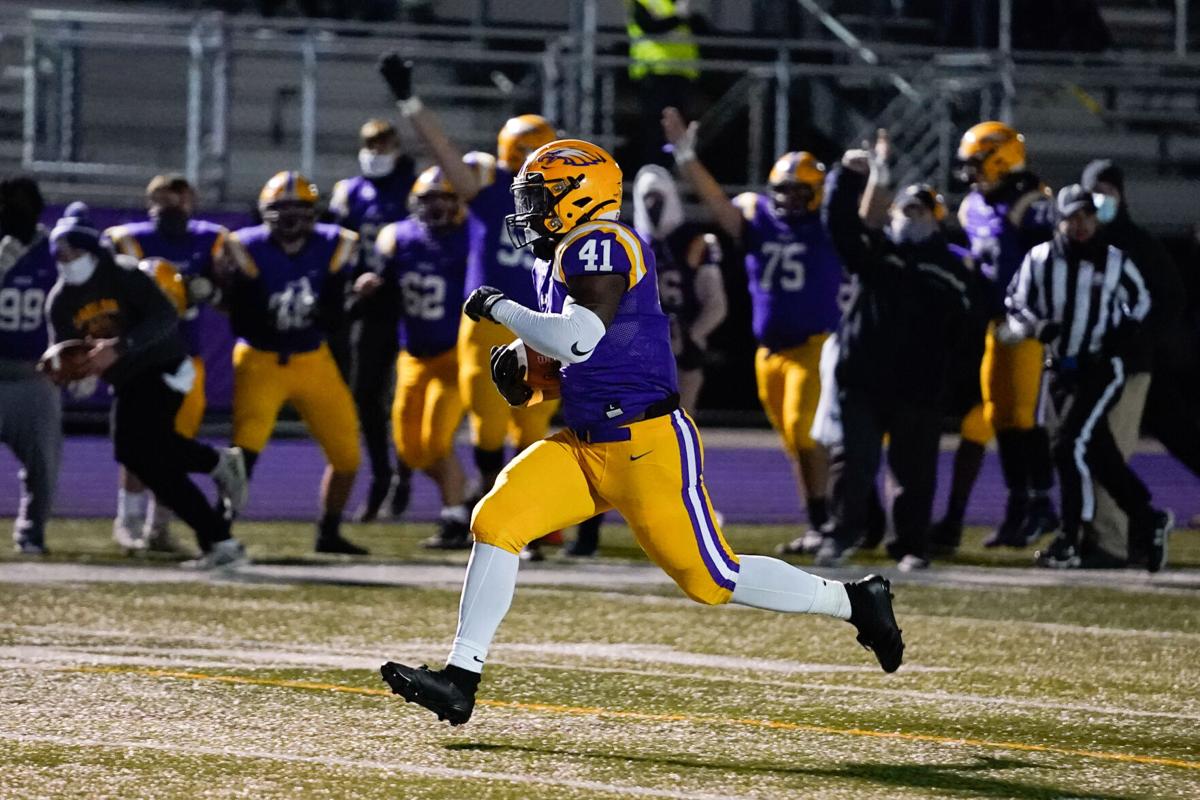 Avon running back Desmond Kelly rumbles toward the end zone for a 28-yard touchdown during last Friday’s Region 6 semifinal. 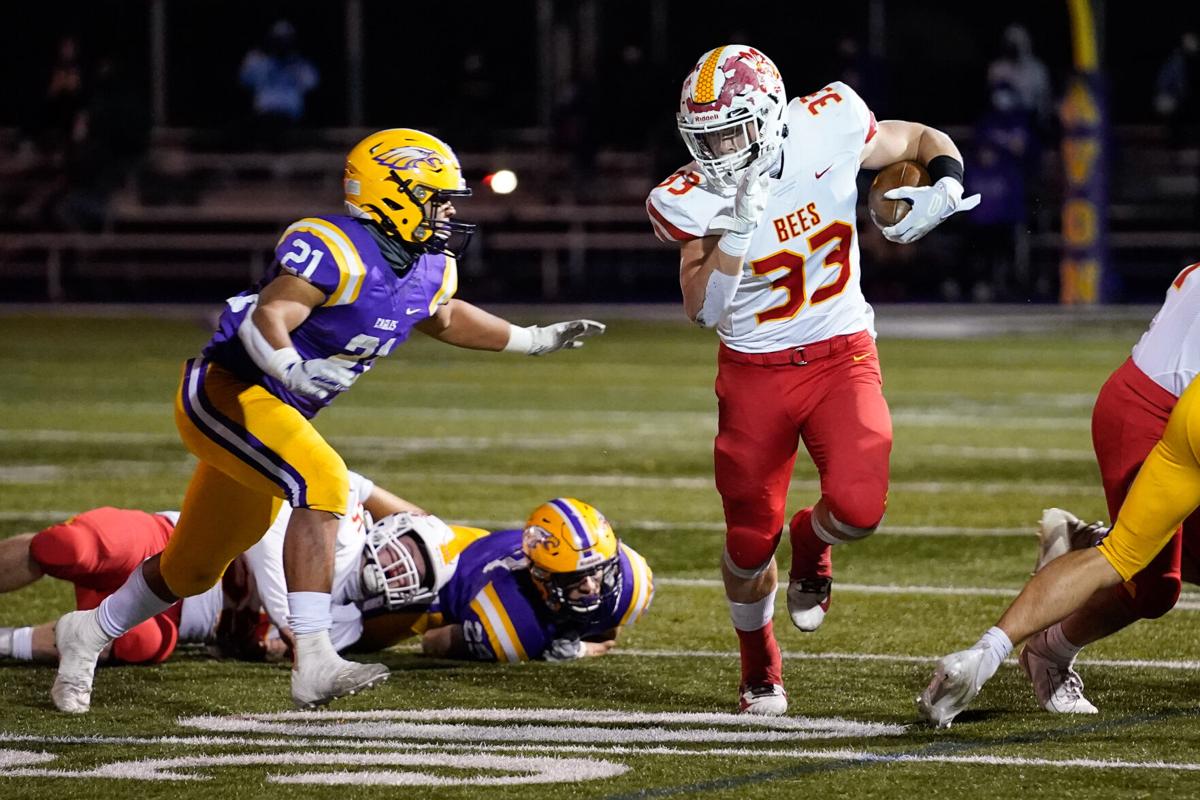 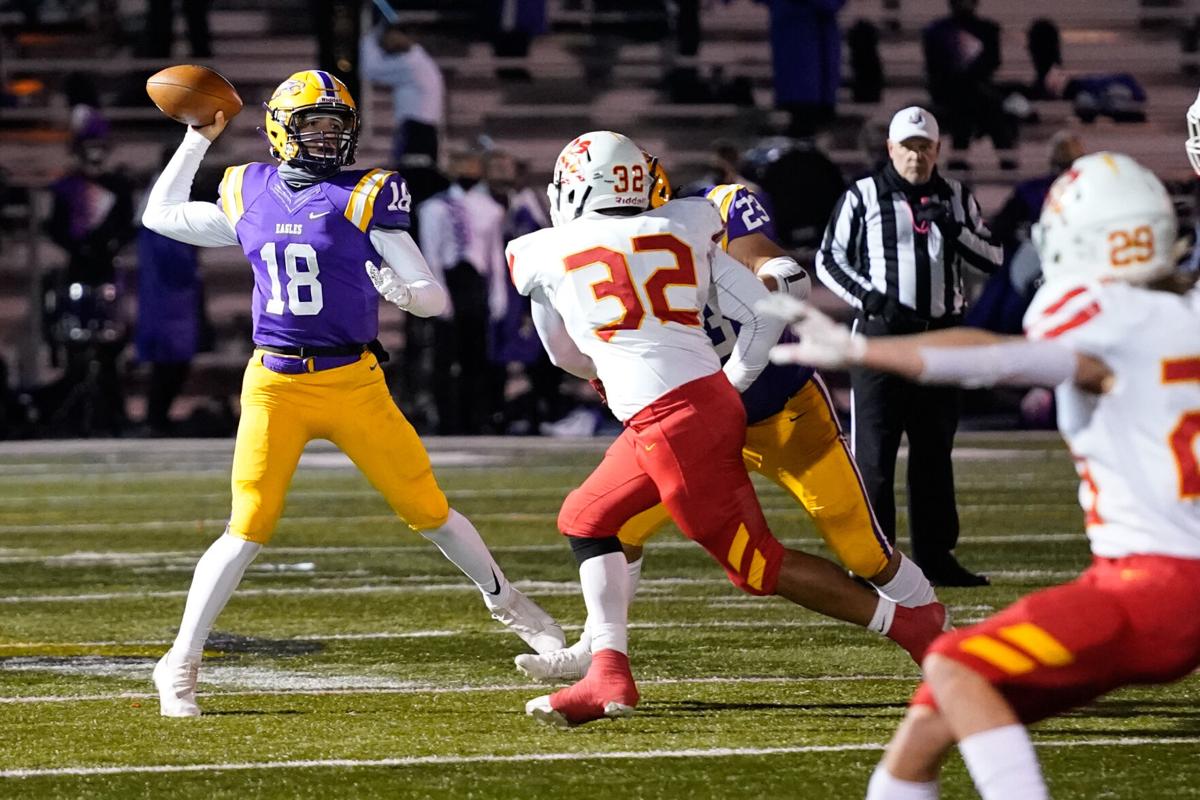 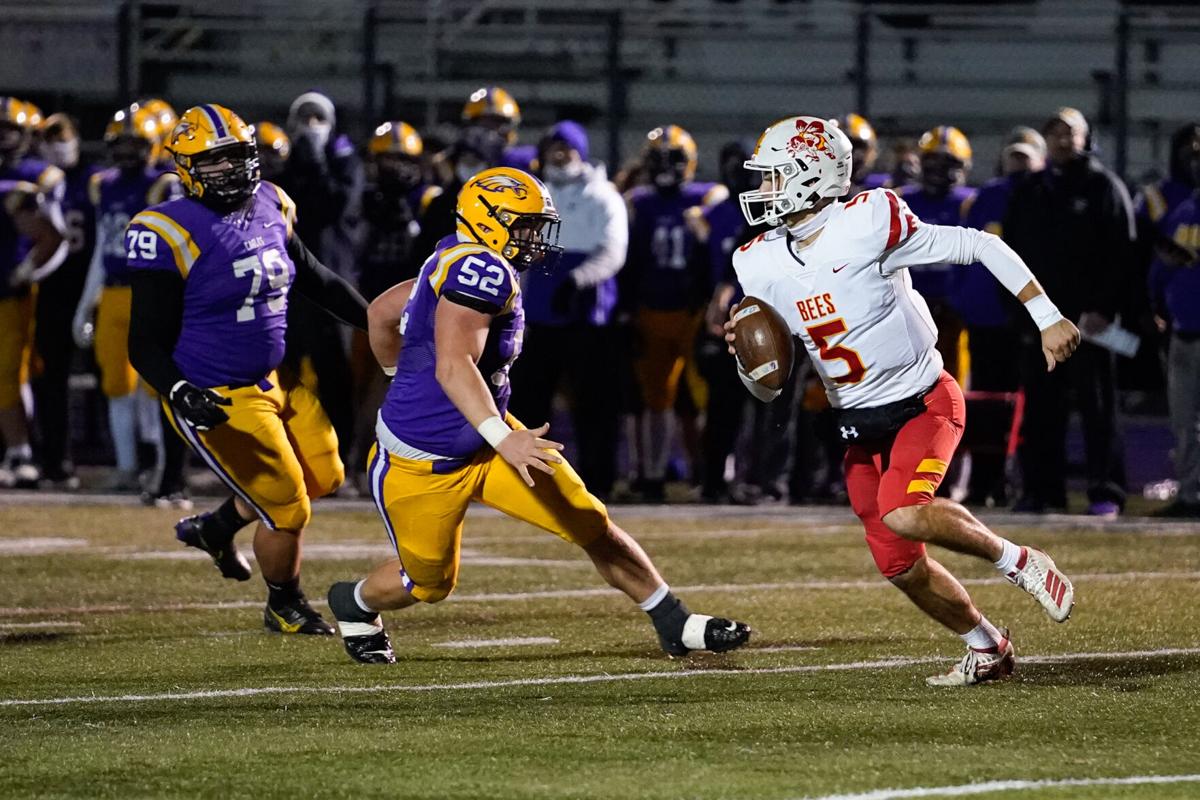 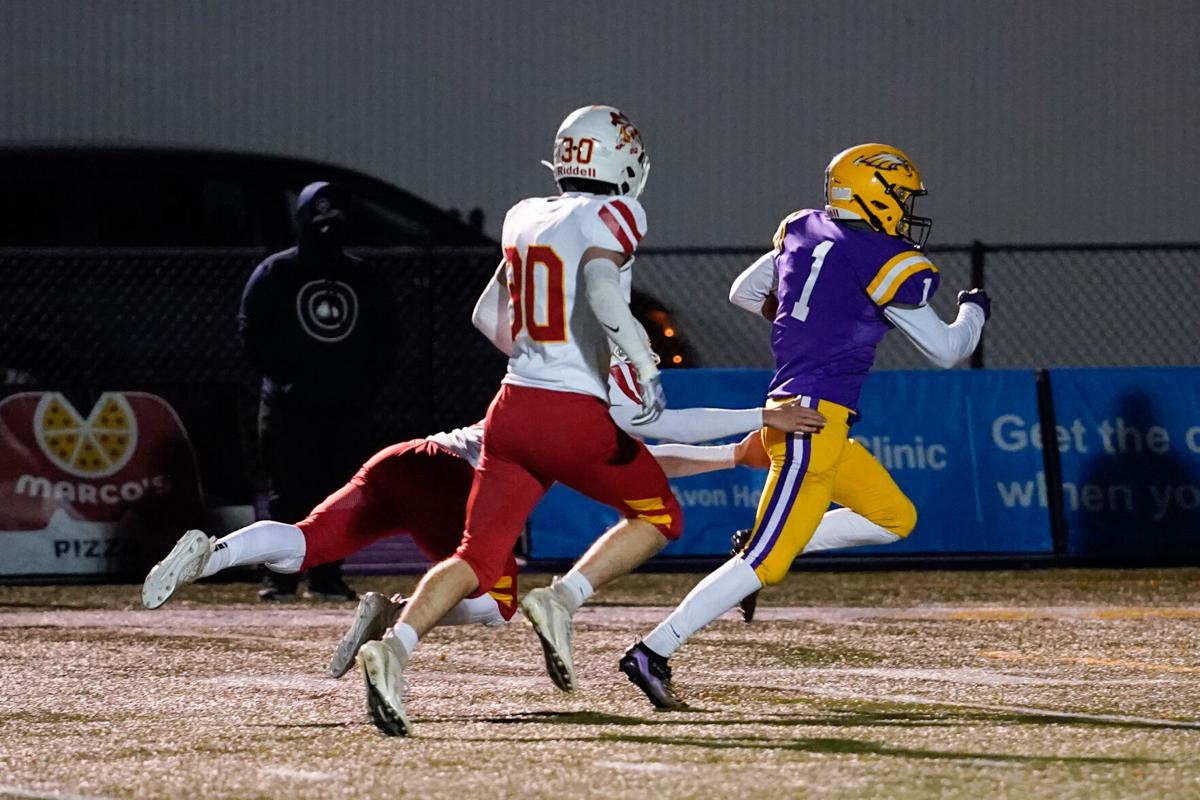 Avon running back Desmond Kelly rumbles toward the end zone for a 28-yard touchdown during last Friday’s Region 6 semifinal.

Avon and Avon Lake to meet again in regional final

Against a Brecksville-Broadview Heights offense that averages nearly 40 points per game, those hits could be expected.

But there’s something to be said for the experience and mettle of an Eagles football team that has advanced to the Division II state semifinal three years in a row. When it was time to close out a back-and-forth Division II, Region 6 semifinal at home, the Eagles’ defense was the one dishing out hits at exactly the right time.

With nine minutes left and his team clinging to a 31-28 lead, Bingham helped force a fumble by standout Bees running back Garrett Kubitz around midfield and recovered it. Seven minutes later, his sack of standout quarterback Joe Labas helped end another Bees drive. Together, the Eagles got three consecutive stops to seal a 38-28 victory.

“It was huge for our momentum because our defense was taking some hits throughout the whole game,” Bingham, a senior, said. “It was big to come up with that momentum and that energy we needed to really stop their offense. (The Bees) have a really high-powered offense. They’re a very powerful team.”

The win meant the top-seeded Eagles (9-0) would earn one more home game, set for this Friday against none other than bitter rival Avon Lake (8-1) in the Region 6 final. The third-seeded Shoremen beat two-seed Toledo Central Catholic on the road, 16-14, their game ending mere minutes before the Avon offense could finish running out the game clock on their own turf.

In order to set up the regional final rematch of a year ago, the Eagles had to weather several lead changes and come back from a 28-24 deficit in the fourth. The rally started immediately after the fifth-seeded Bees (7-2) had taken the lead.

Senior quarterback Niko Pappas found a running lane and sprinted 43 yards to the end zone to put the Eagles ahead 31-28 with 11:01 left. Then, with his defense holding the Bees in check on the other side of the ball, he threw a short pass to wideout Tim Conwell that the junior turned into a 27-yard touchdown with 3:34 remaining and a 38-28 lead.

Conwell finished with five catches for 90 yards in the biggest game of his high school career to date.

“It was awesome (to score that touchdown),” Conwell said. “I never thought I’d score on a hitch route from that far out, but I did it and it felt great...I thought someone would be there to tackle me but no one was and I just made a move, found a seam and scored.”

Affecting the game with his arms and legs once again was Pappas, who completed 12 of 20 throws for 205 yards and two touchdowns, while also rushing for 86 yards on 11 carries. He accounted for four of the team’s five trips to the end zone, the two biggest coming in the fourth quarter.

“The line drove us down that field, and we had to get the momentum back on our side in the second half,” Pappas said. “Everybody started pounding the ball down (the field) and we were into it and it was just a team effort.”

After Avon stalled out and punted on the game’s opening drive, the Bees got on the board. Labas, a University of Iowa commit, put his team ahead 7-0 with a one-yard keeper midway through the first quarter. The Eagles overtook them by scoring on their next two possessions, using Nathanial Vakos’ 45-yard field goal and Desmond Kelly’s 28-yard run to grab a 10-7 lead before the end of the frame.

In a big momentum swing, the Eagle defense made a goal-line stand at their 1 on the Bees’ ensuing drive, then proceeded to march 99 yards just before the half. Pappas’ five-yard rushing score pushed the lead to 24-14 heading into the break.

“We stopped them on the one-yard line and went 99 yards for a touchdown, and that really breaks down a team’s morale,” Bingham said. “It’s so relieving and it’s also rewarding. It’s all about hard work.”

Still, the Bees came out in the second half and capped a 13-play drive with a one-yard rushing score from Garrett Kubitz, who was a load to bring down all night. He finished with 187 yards on 33 carries. After stopping the Eagles on their next two drives, they took the lead, 28-24, on Labas’ 20-yard pass to Jeremy Jonozzo (nine catches, 127 yards), with 11:08 left in the fourth.

From there, the Eagles found their resolve to pull out the win. Now, they face a Shoremen team they beat in Week 1 in two overtimes, 33-30.

“It’s always a big week when we’re playing them,” Eagles coach Mike Elder said. “We’re excited to play them, and I’m sure they’re excited to play us as well…(Being in the regional final) means we’re both really good football teams that have good coaching and really good football players. Lorain County’s lucky to have two programs like that because that’s high school football at its finest.”