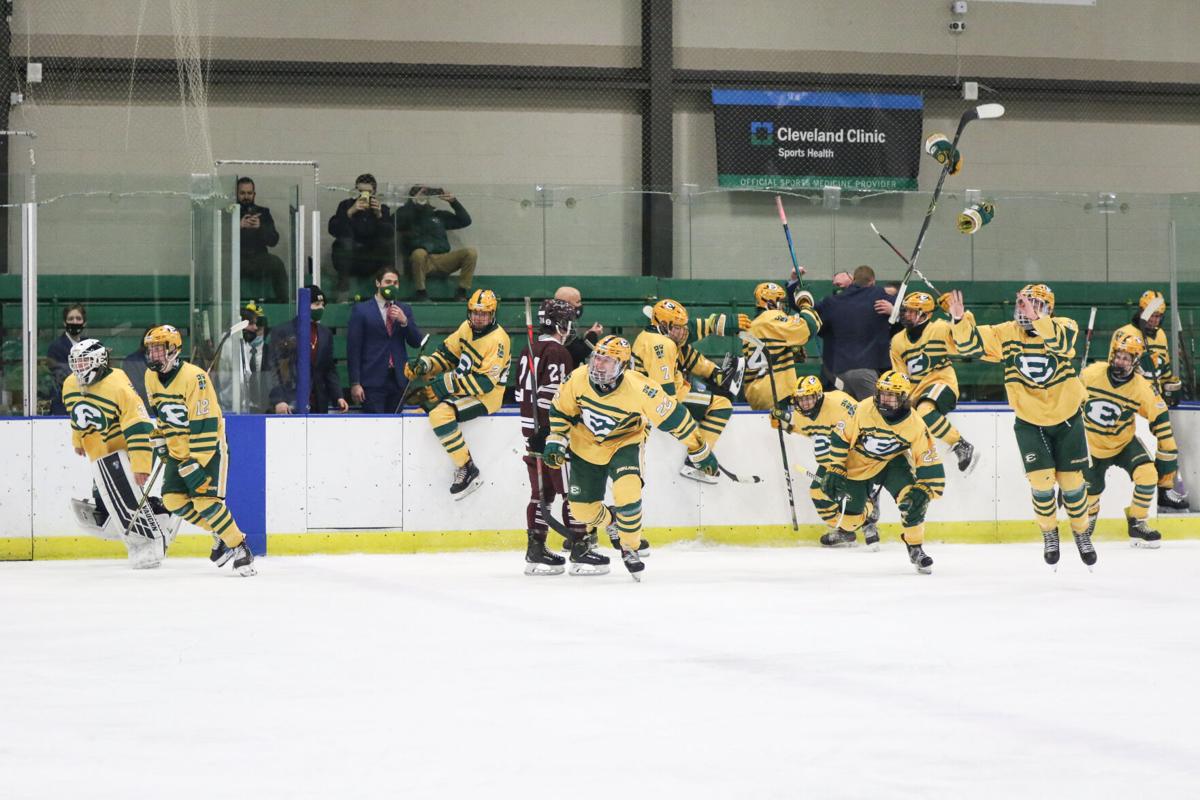 The St. Edward hockey team has won 11 state championships in its history, the last one coming in 2008. They will compete in a state semifinal this Friday against Upper Arlington in Columbus. 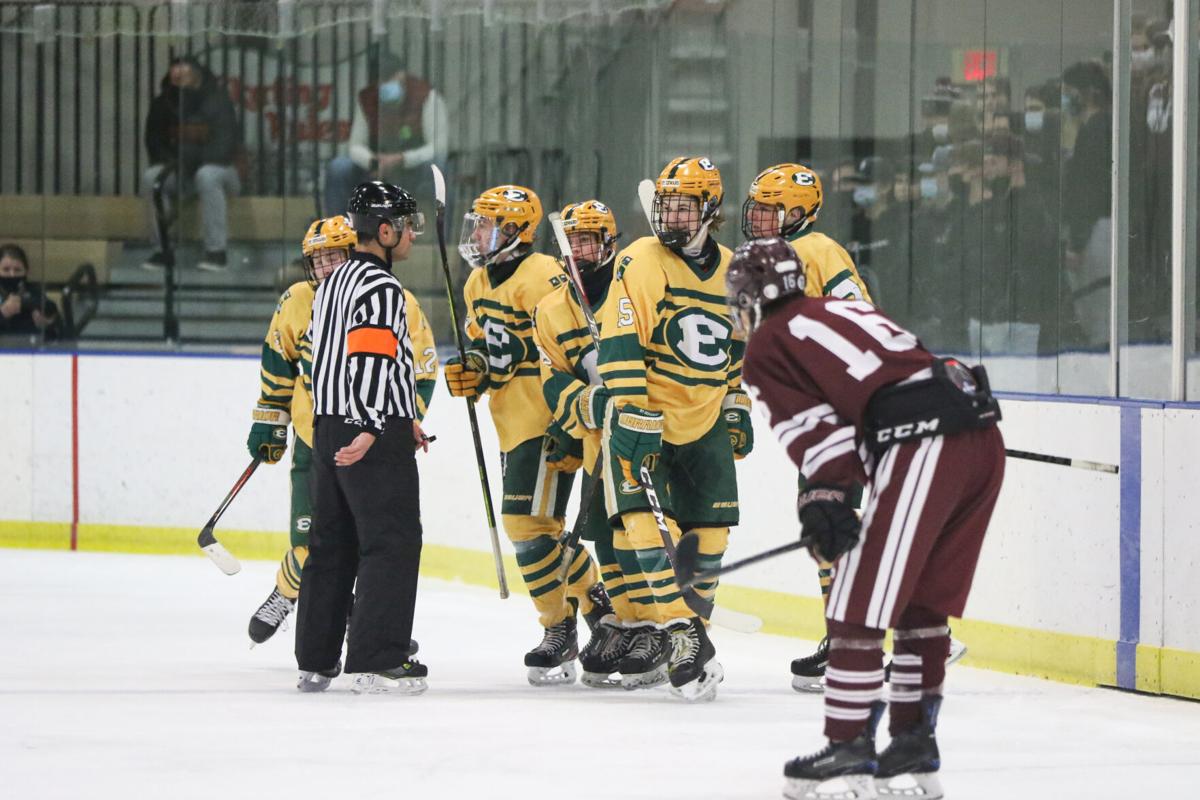 The Eagles scored three goals in the third period to solidify their Brooklyn West District championship March 6 over Rocky River. They won 6-1. 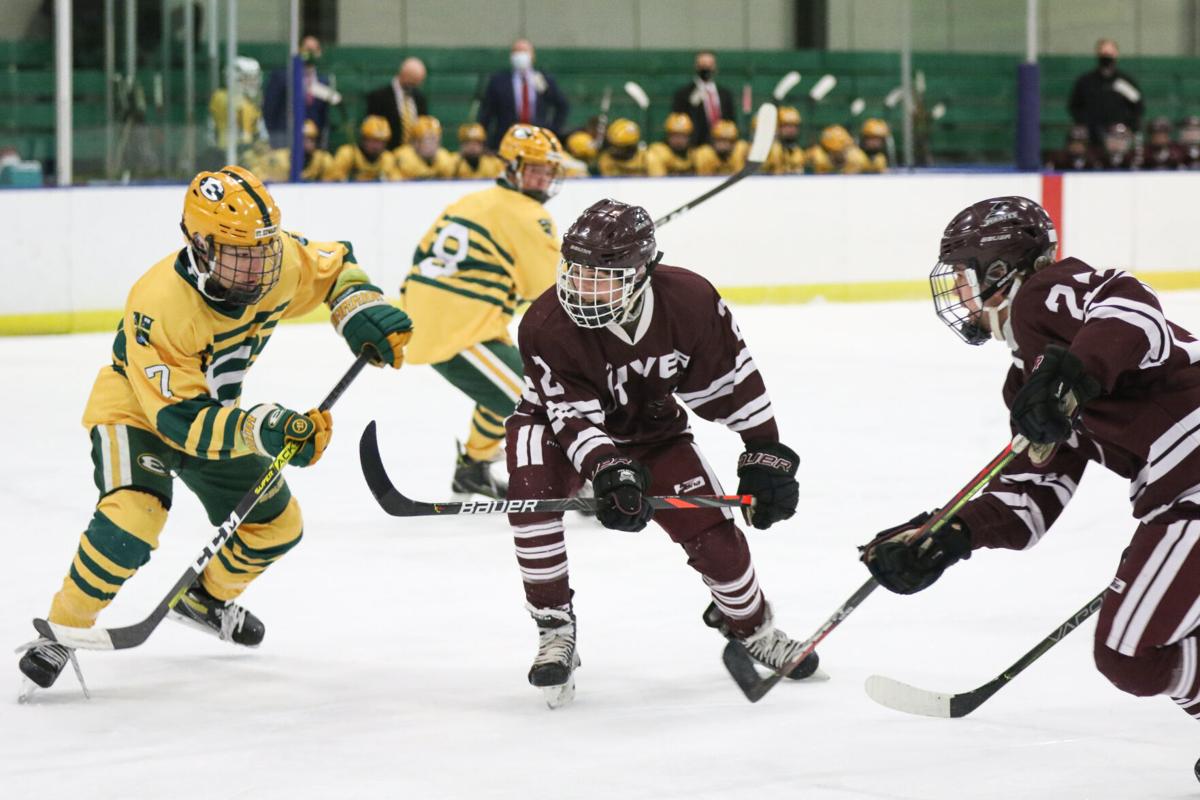 While the Eagles were competing for their first trip to the state final four since 2015, the Pirates were attempting to get to Columbus for the first time since 2013. 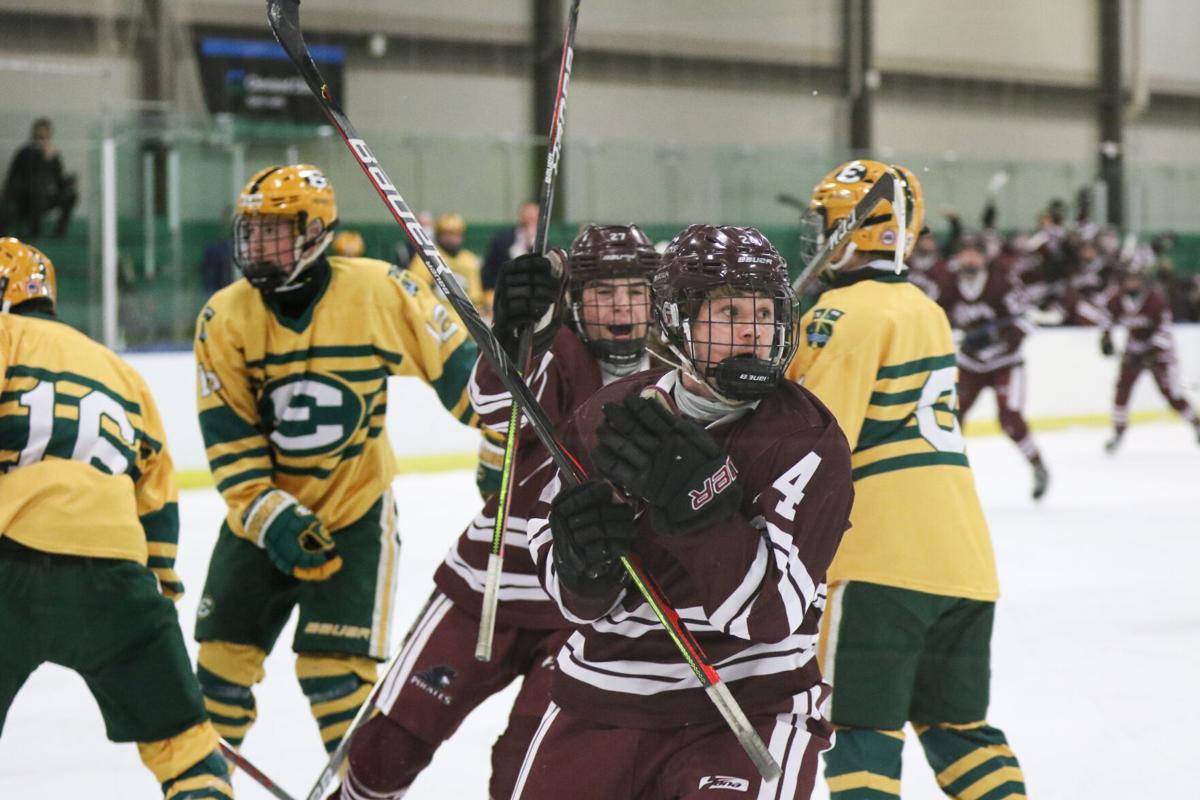 Pirates senior Reece Rochester’s goal late in the first period tied the game at one apiece and gave his team a shot in the arm against the top-seeded Eagles.

The St. Edward hockey team has won 11 state championships in its history, the last one coming in 2008. They will compete in a state semifinal this Friday against Upper Arlington in Columbus.

The Eagles scored three goals in the third period to solidify their Brooklyn West District championship March 6 over Rocky River. They won 6-1.

While the Eagles were competing for their first trip to the state final four since 2015, the Pirates were attempting to get to Columbus for the first time since 2013.

Pirates senior Reece Rochester’s goal late in the first period tied the game at one apiece and gave his team a shot in the arm against the top-seeded Eagles.

All could be said about St. Edward when it came to the Brooklyn West District bracket, which it officially won March 6 with a 6-1 victory over Rocky River at the John M. Coyne Recreation Center.

The Eagles (25-3-1) had run roughshod over their competition in their first three tournament games, shutting out Elyria Catholic, Westlake and Avon by a combined 31-0 score. But something about that matchup with the Pirates (17-8-1) was different.

The Pirates, riding a seven-game win streak and a week removed from knocking out defending state champion in St. Ignatius, had the talent and roster depth to skate with the Eagles–at least for a time–and made them earn their chances on-net.

Eventually, penalties and fatigue wore down the Pirates, and the Eagles turned a close game into a five-goal advantage. But it was no Sunday stroll for the victors, who will face Upper Arlington on Friday at 3:30 p.m. in a state semifinal at the Ohio Health Ice Haus in Columbus.

“We have some work ahead of us, but I’m going to tell you right now, it feels good and we’re going to enjoy it”, said Eagles coach Tim Sullivan, who’s team hadn’t won a district title since 2015.

The Eagles were up 3-1 at the start of the third period when a high-sticking penalty on Ethan Critzer gave the Pirates a power play with 12:04 left. Despite getting several attempts at the net, the Eagles’ penalty kill held up, denying the third-seeded Pirates a chance to cut the deficit.

At even strength, Sean Kolenich sent a slow-moving wrister that trickled past Pirates goalie Christopher Cogan for a 4-1 lead with 8:40 left. Almost four minutes later, Jack Mansour scored a power play goal to up the lead to 5-1.

Hayden Payne’s blast from near the blue line with 1:55 left sailed into the net for the 6-1 lead, and the Eagles could start to celebrate.

“St. Ed’s has been the number one team in the state all year, and we knew they were good,” Pirates coach Chris Cogan said. “We just needed to play at a higher level, and getting down and taking penalties (hurt). I told them it’s nothing to be ashamed of. They played a good game. Nobody expected us to be here to begin with. They should be proud and not hang their head.”

The Eagles outshot the Pirates 46-19, went 3-for-3 on the penalty kill and largely controlled possession, but the game was a battle from the opening faceoff. After Lucas Newton put them ahead 1-0 with 9:47 left in the first, Hayden Weaver set up Reece Rochester for the tying goal with just under three minutes to go, giving the Pirates a jolt of momentum before intermission.

“(St. Ed’s) comes at you, and you make a simple mistake, the puck lands on their stick and it’s in the back of the net,” Chris Cogan said. “That’s part of the difference. They’re playing in a different league, that Great Lakes Hockey League, and playing at a high level night-in and night-out. That definitely prepares you. We’re just that little public school trying to make noise. It’s different.”

Sullivan thought the first period was a time for both teams to work out any nerves they may have been feeling.

“That first period for both teams was a time to get settled,” he said. “This was an emotional game, knowing they had the opportunity to go to the final four. None of our guys have ever done that.”

Newton stole the momentum back just 88 seconds into the second period with the go-ahead goal. With 3:40 left and Rochester in the penalty box for a slash, Kolenich scored with three seconds left in the power play for the 3-1 lead.

In net, Christopher Cogan made 40 saves for the Pirates while Eagles counterpart Evan Wrightsman made 18.

It was the final game for a talented 10-man senior class that set a high standard for future groups to follow. They came one game short of winning the program’s first district title since 2013. The group of Rochester, Christopher Cogan, Danny Asmar, Dillon Bandi, Kevin Beer, Chris Brej, Ian Opdycke, Zach Pejeau, Matt Stueber and Hayden Weaver will graduate having won a Baron Cup, obtained on Feb. 14.

“I think overall the team played phenomenal this year,” the younger Cogan said. “We came away with a Baron Cup this year and carried it into the tournament. Playing Ignatius and beating them was huge for the team. Then playing top 10 teams all year (helped) us get better…(The other seniors) are just like family. I can call these guys my brothers. They’ve got my back and I’ve got their back, and this is definitely one of those years where all the guys in the locker room are one big family.”

The Eagles reached the state’s final four for the 22nd time in program history, and have a chance to claim their 11th state title overall, and first since 2008.