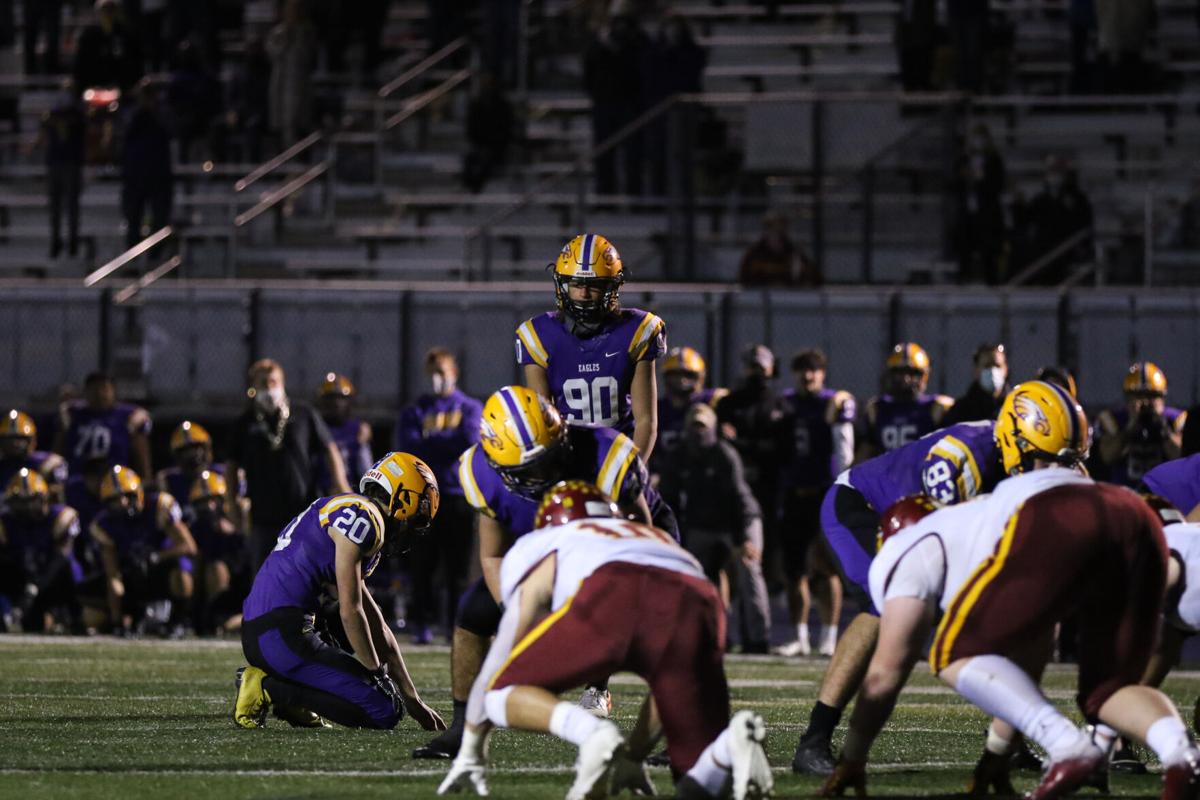 Avon kicker Nathanial Vakos’ lines up for what would be his fifth made field goal of the season last Friday in the Division II, Region 6 final against Avon Lake. He split the uprights to give the Eagles the 20-17 win. 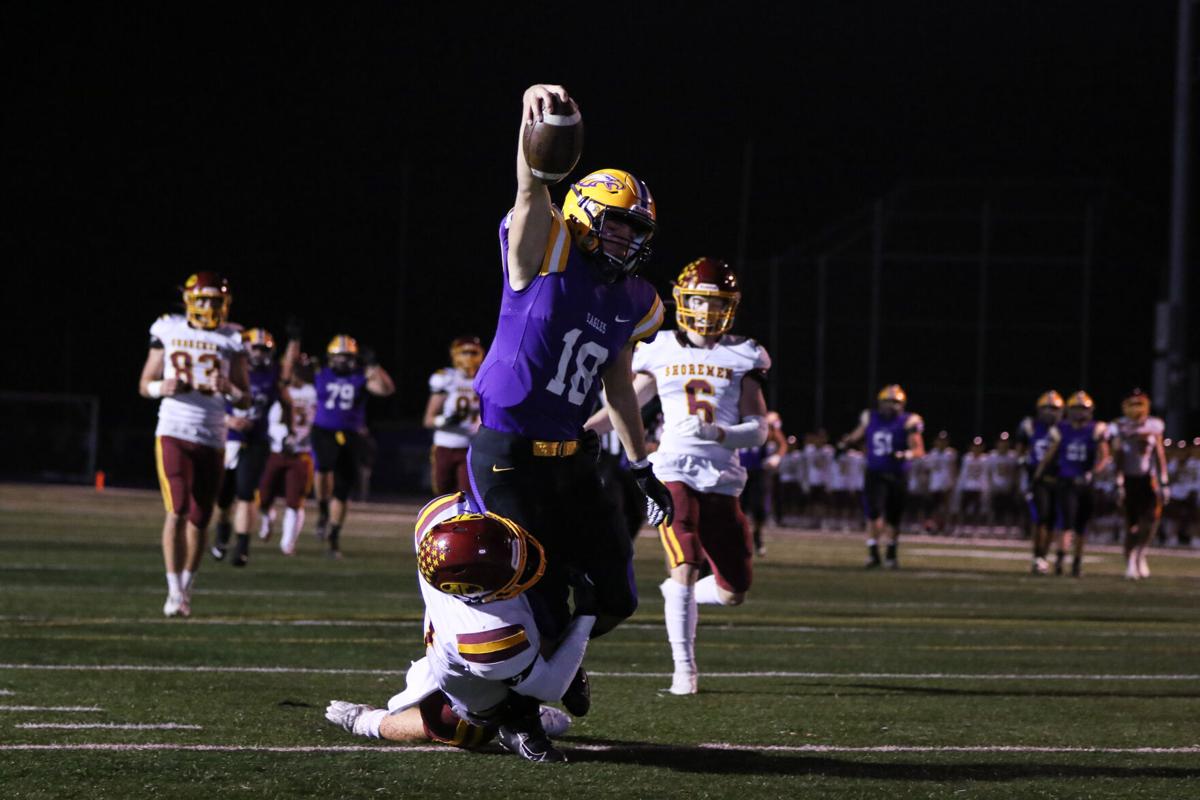 Avon quarterback Niko Pappas rushed for 73 yards and a touchdown during his team’s 20-17 win over Avon Lake. 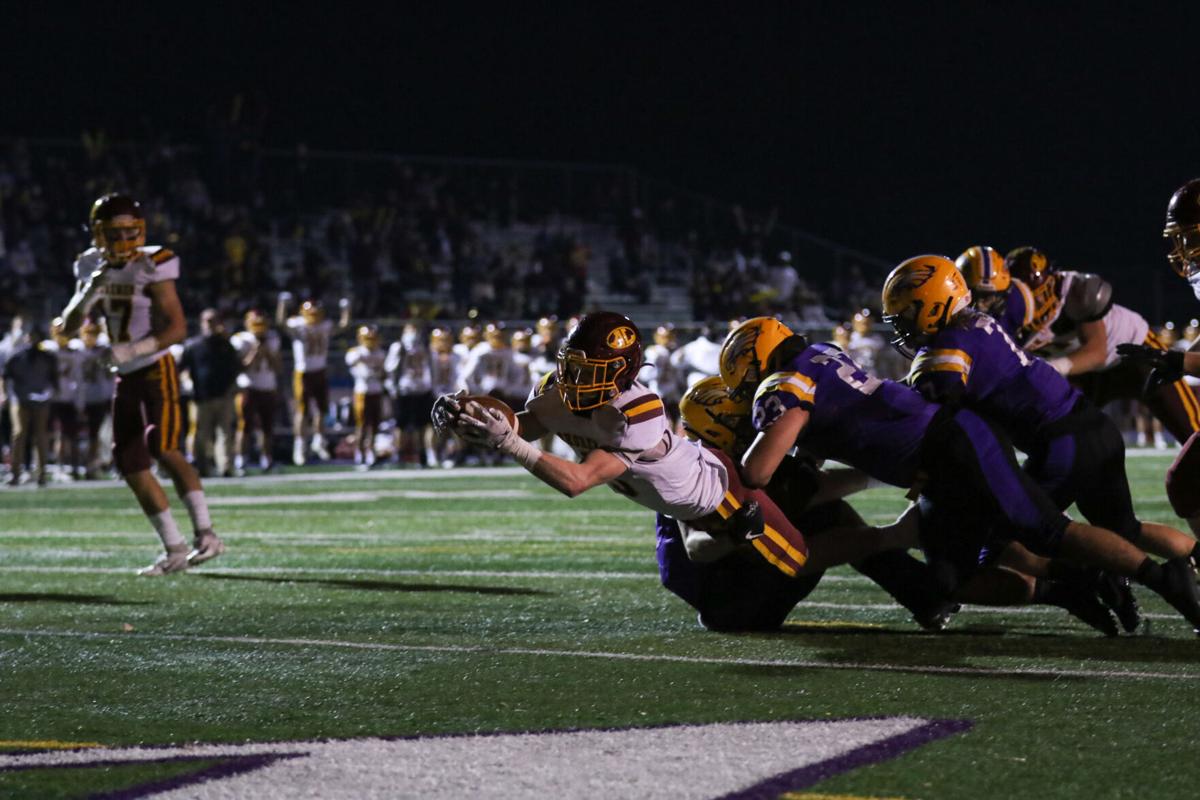 Avon Lake senior running back Gage Duesler had to stretch to reach the end zone on his nine-yard touchdown in the second quarter. His score briefly put the Shoremen ahead 14-7. 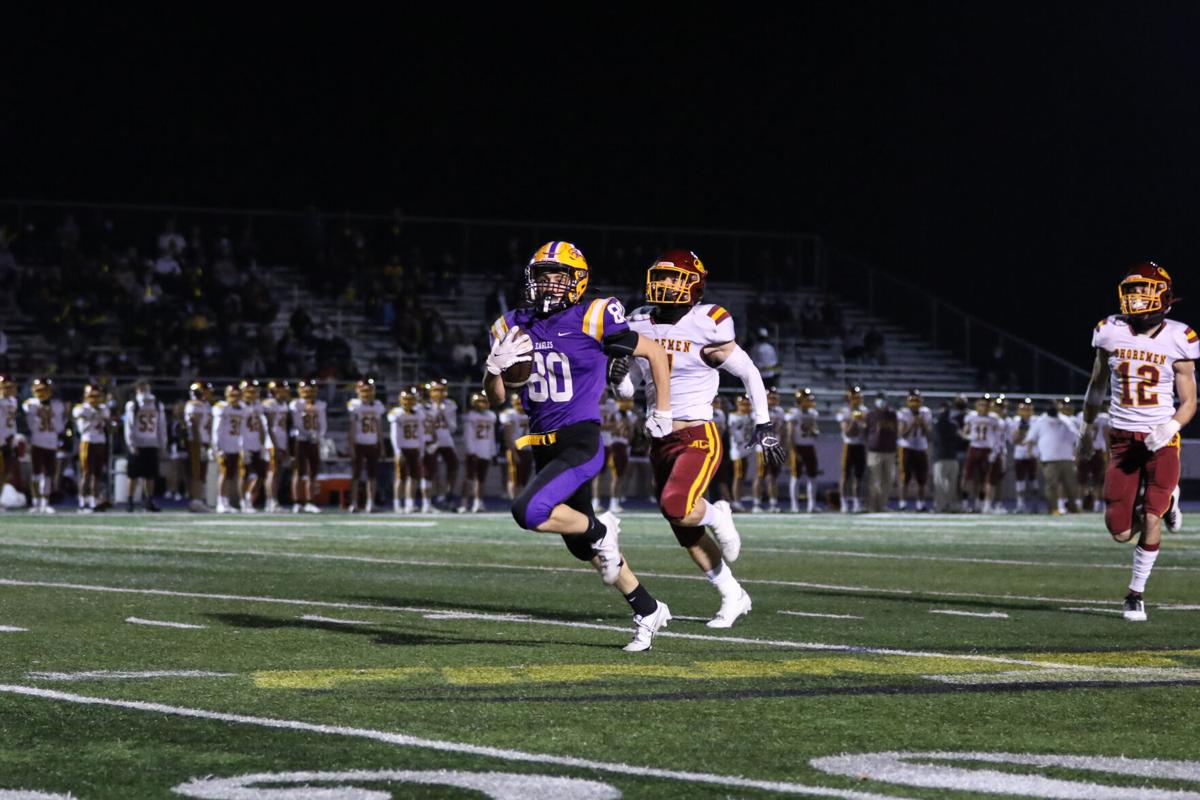 Avon junior Tim Conwell continued his breakout performance in the Division II tournament with this 81-yard touchdown reception in the first quarter of last Friday’s game against Avon Lake. 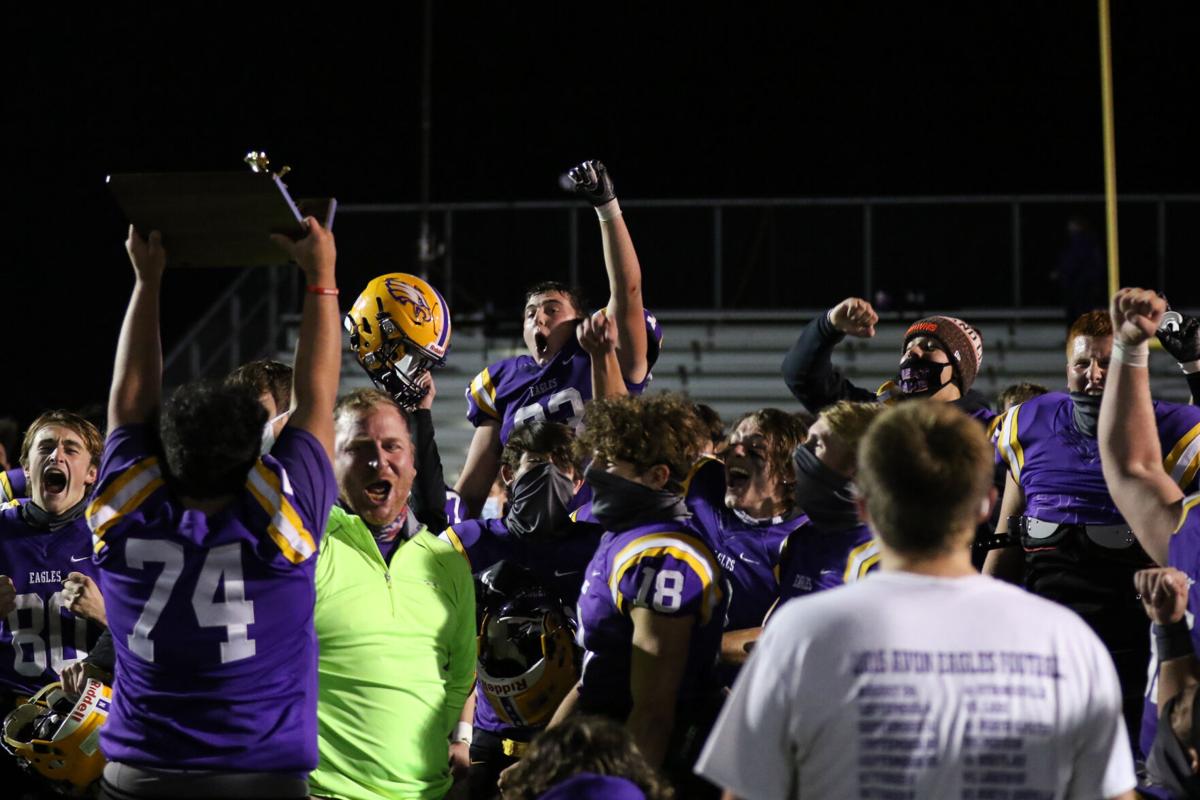 Avon’s fourth consecutive trip to the Division II state semifinals came at the expense of their neighboring rivals, Avon Lake, for the second year in a row. 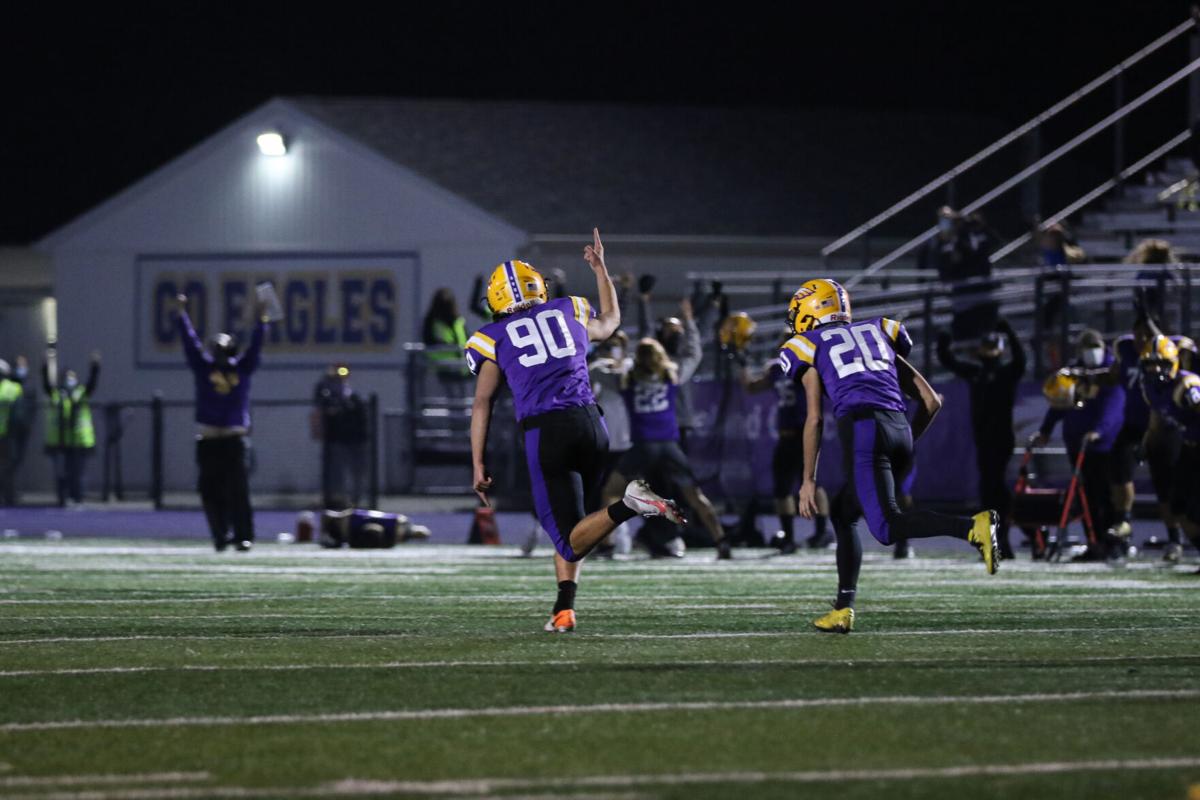 Avon kicker Nathanial Vakos’ lines up for what would be his fifth made field goal of the season last Friday in the Division II, Region 6 final against Avon Lake. He split the uprights to give the Eagles the 20-17 win.

Avon quarterback Niko Pappas rushed for 73 yards and a touchdown during his team’s 20-17 win over Avon Lake.

Avon Lake senior running back Gage Duesler had to stretch to reach the end zone on his nine-yard touchdown in the second quarter. His score briefly put the Shoremen ahead 14-7.

Avon junior Tim Conwell continued his breakout performance in the Division II tournament with this 81-yard touchdown reception in the first quarter of last Friday’s game against Avon Lake.

Avon’s fourth consecutive trip to the Division II state semifinals came at the expense of their neighboring rivals, Avon Lake, for the second year in a row.

Nathanial Vakos trotted onto the field last Friday, as calm as someone inexperienced in such a scenario could be, and got in position.

The Avon football team’s fourth consecutive trip to the Division II state semifinals was riding on his powerful right leg, and there were two seconds remaining in regulation of a 17-17 contest with rival Avon Lake.

Vakos was as ready as he could be to take a 30-yard game-winning field goal, but first, he was forced to think about it. Avon Lake coach Matt Kostelnik called a timeout to ice the junior and gird his defense for one final push.

When play resumed, Vakos’ kick was dead-on, and he sprinted across the field as his teammates chased him down to celebrate a 20-17 victory in the Region 6 final. This Friday at 7 p.m., the Eagles will face Akron Archbishop Hoban (9-0) at Byers Field in Parma with a spot in the Division II state championship game on the line.

“I was staying calm, trying to keep my mind clear,” Vakos said. “I trusted my guys that they’d get me in the right position, they did and I put it through. It’s the best moment of my life.”

Vakos, who also drilled a 26-yard field goal earlier in the fourth quarter to briefly give the Eagles (10-0) a 17-14 lead, did the heavy-lifting for an offense that sputtered in the second half due the speed and skill of the Shoremen defense. They were held to 323 yards–113 below their season average of 436, but did just enough to get the kicker in position to split the uprights.

“This is a great high school football rivalry, because of our opponents, too,” Eagles coach Mike Elder said of the teams’ latest tight contest. “A lot of times people disrespect their rivals, but it’s not a rivalry without each other, and we’re better as a program today because of the Shoremen. We really are. We’re better in the off-season, we’re better in the season because of them, so I’ve got nothing but respect for Coach (Matt) Kostelnik, his program, that entire community because we’re very similar, and this is what high school football should be.”

The win was the Eagles fourth in a row over the Shoremen (8-2), and was the second consecutive time they came out on top in the regional final. In the season-opener on Aug. 28, the Eagles erased a 24-7 deficit to eventually beat the Shoremen, 33-30, in two overtimes.

Vakos, a second team All-Southwestern Conference soccer player, was also key in the opener, making a field goal in the first overtime of that dramatic win. Last Friday’s game-winner, however, provided the highest stakes he’d experienced on an attempt.

“I’d been iced once or twice before (in a game),” Vakos said. “I knew it was coming. It might’ve happened last year, but I knew it was coming this time, and I just stayed calm through it and did my job. It was my first game-winning field goal.”

To get him to a 30-yard distance, the Eagles first had to do some marching. After a key defensive stand forced the Shoremen to punt from inside their own end zone, the Eagles began the game’s final drive from the opposing 32. Senior running back Devon Hunter, who was held to a season-low 56 yards on 18 carries, burst through the usually-stifling Shoremen line for 13 yards, then picked up one more on the next play.

The Eagles were stuffed over their next two plays, but managed to set up Vakos with a favorable spot to put the game away. According to Elder, he’d been hitting 50-yard tries during warmups earlier.

“Nathanial Vakos is only a junior, and he’s a kid that I think is the best kicker in the state of Ohio,” Elder said. “He’s going to kick in big-time college football someday. We practice that (end of game) situation a lot, where I call a timeout and we ice him, so I knew if it didn’t go through, it wouldn’t have anything to do with nerves, it would have to be him just missing one. But he made it, and it was just a great high school football game.”

The score was tied at 14-14 entering the fourth quarter, a rarity for two teams that averaged about 40 points per game, respectively. The scoreless third was instead a showcase for two determined defenses, which held each other to a combined 137 yards.

After Vakos’ 26-yard field goal with 9:55 left to go put the Eagles up 17-14, the Shoremen responded with a four-minute drive that ended with Owen Wiley’s tying 23-yarder. On the play before that field goal, quarterback Michael Corbo (6-for-12, 115 yards, interception) appeared to have connected on a 13-yard touchdown pass to Jared Krukowski, but the senior receiver was ruled out of bounds. The play was a missed opportunity for Avon Lake, which played well throughout but struggled to find the end zone.

“My hats off to Coach Elder and the Eagles,” Kostelnik said. “Good job on them, a great effort tonight, and they ended up pulling it out. We had opportunities, we just didn’t execute. But I’m proud of my boys and they had a heck of a run.”

Offensive execution was crisper in the first half, as both teams reached the end zone twice. Avon took a 7-0 lead with 6:19 left in the first quarter when quarterback Niko Pappas (10-19, 191 yards, interception) threw a bomb to a wide-open Tim Conwell for an 81-yard touchdown. Avon Lake responded with a three-minute scoring drive that ended with Corbo’s two-yard push into the end zone.

The Shoremen took their only lead of the game midway through the second quarter, when Gage Duesler (16 carries, 104 yards) sprinted nine yards for a score and a 14-7 advantage. On the ensuing drive, Pappas (19-73) turned a keeper into a 35-yard touchdown run to tie it.

“It comes down to a handful of plays, some field position here and there,” Kostelnik said. “As always, I’m going to go back and look at how I can get better, where can I be a better play-caller...It’s 14-14 at halftime. To hold these guys to six points in the second half, we had a great opportunity. But overall, we had a couple of opportunities, we weren’t able to capitalize.”

Conwell finished with five catches for 102 yards to lead all Eagles receivers. Ryan Kremer led the Shoremen with 46 yards on two catches, and Mason Wheeler gained 37 yards on 12 carries.