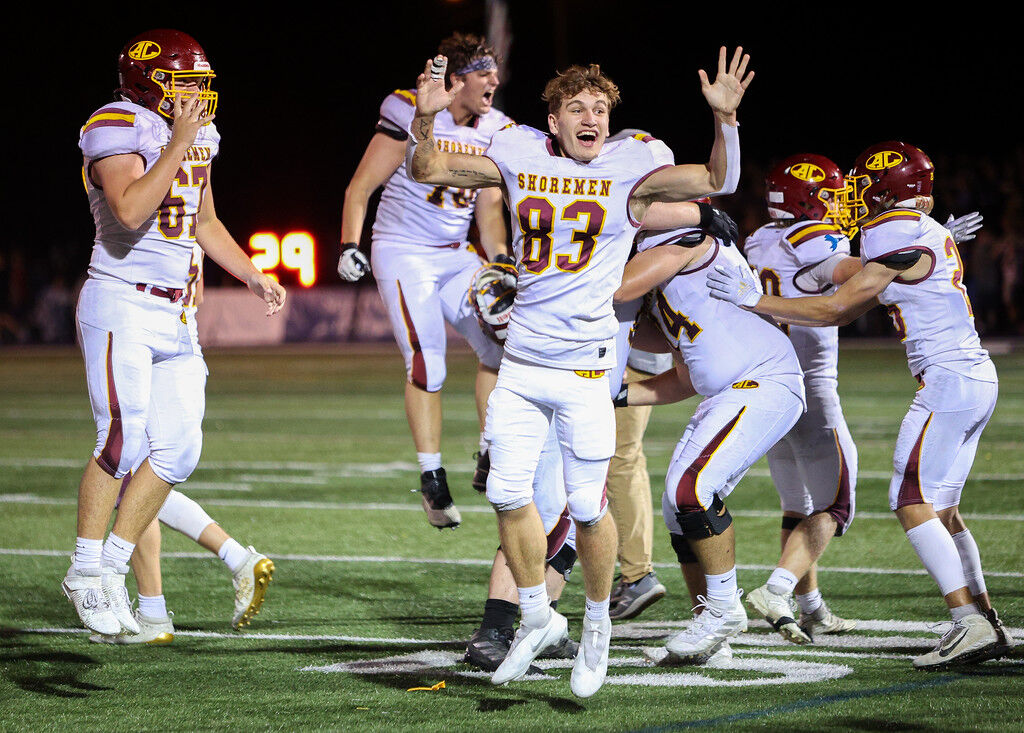 Members of the Avon Lake football team had plenty of reason to celebrate Friday night after holding on to beat arch rival Avon 30-24. It was Avon Lake’s first victory over their neighboring rival since September of 2018. In four meetings after that date, the Eagles had won each time, including a pair of down-to-the-wire results in the Division II, Region 6 final. 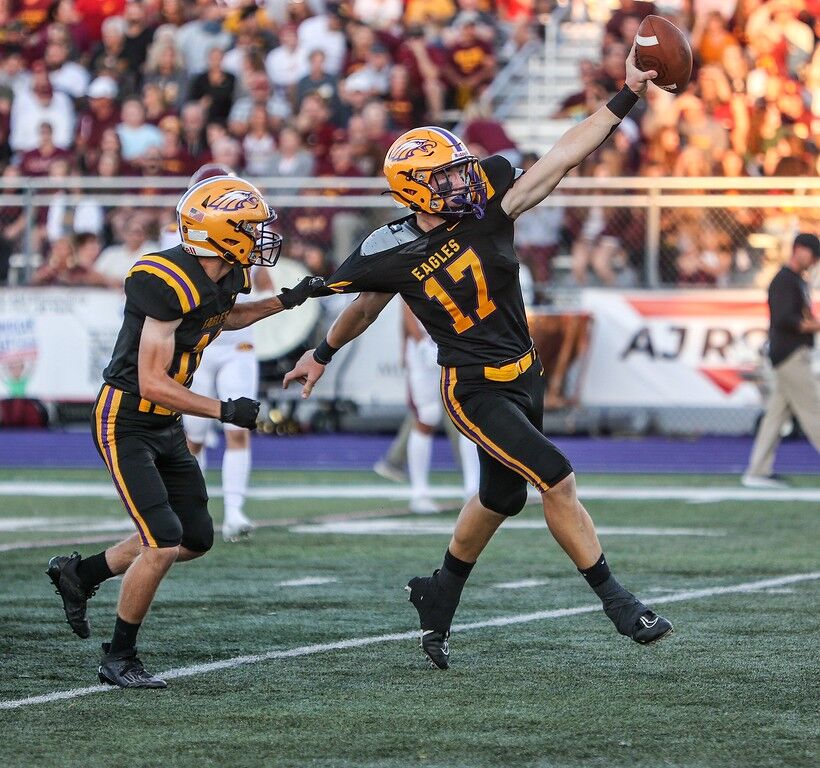 Despite committing five turnovers, Avon was able to cut into Avon Lake’s 30-10 halftime lead and pull within a touchdown in the fourth quarter. 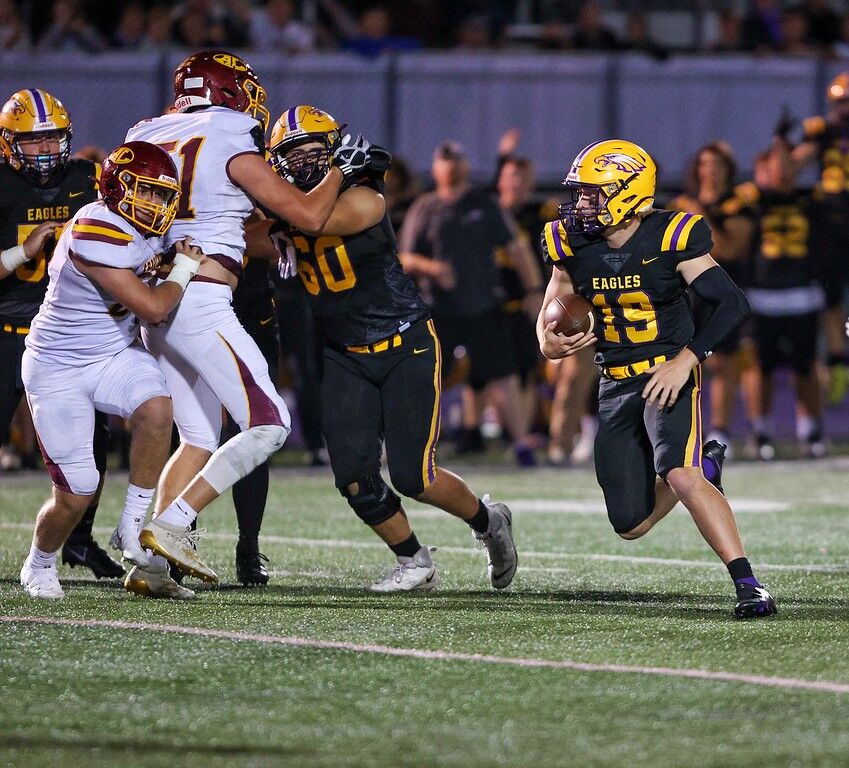 Rivalries can also bond the participants, as has been the case between the Avon and Avon Lake football teams. After Friday’s game, members of both teams took a knee together to say a quick post game prayer. 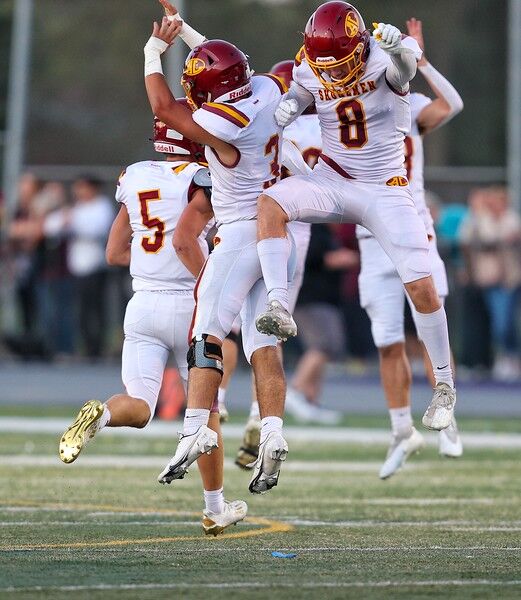 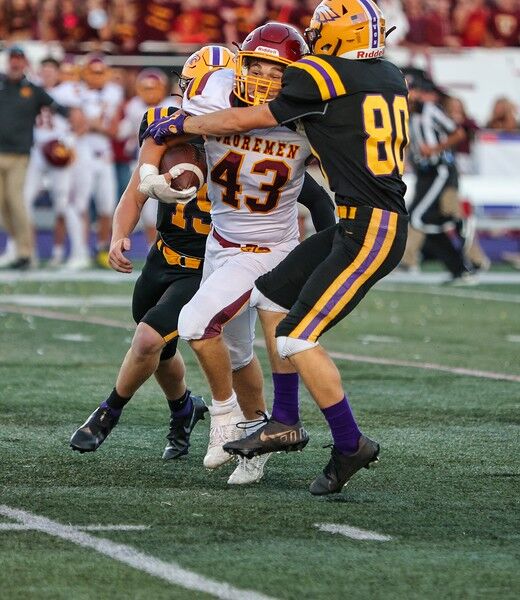 Members of the Avon Lake football team had plenty of reason to celebrate Friday night after holding on to beat arch rival Avon 30-24. It was Avon Lake’s first victory over their neighboring rival since September of 2018. In four meetings after that date, the Eagles had won each time, including a pair of down-to-the-wire results in the Division II, Region 6 final.

Despite committing five turnovers, Avon was able to cut into Avon Lake’s 30-10 halftime lead and pull within a touchdown in the fourth quarter.

Rivalries can also bond the participants, as has been the case between the Avon and Avon Lake football teams. After Friday’s game, members of both teams took a knee together to say a quick post game prayer.

On the surface, a 30-24 final score might not immediately seem like the game that preceded it was a tale of two halves. But that’s exactly what happened Friday night at Mark Wahlberg Chevrolet Stadium in Avon when the Eagles hosted their bitter rivals, the Avon Lake Shoremen.

In the last two regular season meetings, Avon came away with even closer contests – 13-12 in 2019 and 33-30 in a double-overtime battle. The Eagles also had two playoff wins over the Shoremen in those years as well.

This time, however, thanks to stalwart defense and capitalization on Avon mistakes, the Shoremen claimed the six-point victory to remain unbeaten (4-0, 1-0 Southwestern Conference).

Avon (2-2, 0-1 SWC) opened with as quick of a start as a team can ask for, going 68 yards on three plays (all carries by Jakorion Caffey) for a quick score to put the Eagles up 7-0. On the ensuing Shoremen drive, Avon forced and recovered a fumble, setting up a 50-yard field goal for Nathanial Vakos that gave the Eagles a 10-0 lead just more than six minutes into the game.

From there on out, though, the Shoremen were in control and the defense shut down the run for most of the rest of the game.

“The problem was, we just needed to settle down and settle in,” Kostelnik said. “There wasn’t anyother than, we know their running back is good, we know their run game is good, we know that they are a good football team and we just needed to make sure we build our wall like we always do. (Caffey) is going to be a great player but we need to make sure we get into our fits and give ourselves a chance.”

After scoring on its next drive on a 37-yard touchdown pass from Jake DePaul to Matthew Stuewe but missing the extra point, Avon Lake trailed 10-6. On Avon’s next three possessions, the Eagles turned over the ball – two fumbles and a blocked punt. Each time, Avon Lake answered by scoring and with just over four minutes left in the first half, the Shoremen had stormed ahead 23-10.

In total, 24 of Avon Lake’s 30 points came off Avon turnovers.

“When you have a well-coached team like that and we’re able to have as many turnovers as we did, you never expect that,” Kostelnik said. “You don’t expect a team like that to turn the ball over six times. They’re a very well-coached team (and) I’m sure we’ll see them again at some point. I told (Avon coach Mike) Elder, we usually have a date at the end of the year.”

Avon’s final possession of the first half ended much the same, with a DeTillio pass bouncing off the hands of an Avon receiver and falling into the arms of Pierden Pepe, the same player that ran the blocked punt back for a touchdown.

Once again, the Shoremen drove down the field in just 28 seconds, scoring seven more points and going into halftime ahead 30-10.

“We didn’t lose the game because of lack of effort, we lost it because of lack of execution,” Avon coach Mike Elder said. “Tip your hat to (Avon Lake). They played a really good football game. (I don’t want to) say anything to take away from their effort, because it was monumental. But boy, I don’t know that we could have played a worse first half. We dug ourselves a hole and it was too big to overcome in the end.”

Avon Lake began the second half with the ball and all the momentum. The Eagles managed to get a stop and scored on its ensuing drive (a six-yard touchdown pass to Caffey), cutting the deficit to 30-17 midway through the third quarter.

The Shormen followed that up with a lengthy drive that ran into the fourth quarter. With a chance to extend the lead to 16 points, Avon Lake kicker Owen Wiley missed a 45-yard field goal wide right, after he had hit from the same distance earlier in the game.

Three plays later, the Eagles found the end zone again, once again on a connection between DeTillio and Caffey, this time for 66 yards. Avon trailed by just six points.

Avon’s defense responded by forcing a three-and-out, which brought the momentum firmly into the hands of the Eagles’ sideline and fan sections, and gave Avon a chance to pull ahead with field position starting in Shoremen territory.

Feeding the running back duo of Caffey and Gavin Ehrhardt, the Eagles got down to the Avon Lake 19. However, the sophomore Caffey lost the ball and Avon Lake landed on it, allowing it to run out the clock on the final drive.

“He (was) pretty down because of the fumble. I told him this game was lost by a lot of things, it isn’t that play, you can’t point to one play,” Elder said. “We wouldn’t have been in that position without him. He’s got a really bright future. He’s a special player and a special kid.”

Caffey finished the game with 14 carries for 121 yards and a touchdown. He also had two catches for 72 yards and two touchdowns. DeTillio finished 5-of-6 passing for 123 yards, two touchdowns and the interception. One of those completions was a 55-yard pitch-and-catch to Tim Conwell.

For the second consecutive week, DePaul was forced to step into the starting quarterback role for the Shoremen. While listed on the roster as a receiver and defensive back, DePaul filled the shoes of the absent Jeremy Dzik and once again successfully led the Shoremen.

His final statline read 9-of-10 passing for 160 yards and two touchdowns, both to Stuewe. He also rushed 15 times for 65 yards.

“(Avon) scared me to death at the end there,” DePaul said. “As a football fan, you can’t ask for much more. We came out on top this year and I’m just thankful to be a part of this team. Thankful for my coaches, my linemen, my receivers – I love this team so much. This win means so much to us.”

While the Shormen offense is full of dynamic threats, DePaul said having a player like Stuewe that can make high-difficulty catches like he did Friday night makes his job easier.

“I couldn’t even see him and he goes up and makes a catch for me,” DePaul said. “I just have to throw it to him. That kid has worked his butt off all season (and) it’s paying off now.”

Kostelnik equally praised DePaul’s efforts in the win. While he would not commit to the possibility of DePaul starting when Dzik comes back, he simply acknowledged that “it’s an option.”

“Jake’s done a great job of shortening the game and managing the game while Jeremy’s been out,” Kostelnik said. “Stuewe’s been coming up with big plays (as well). I have to give it up to our O-line and Kruk (running back Jason Krukowski). Who would have thought I’d be giving him the ball 35 times a game. He’s a tough son-of-a-gun.”

Kostelnik said he and his team were going to enjoy this win for all of 24 hours after Friday night and that, after that, the focus had to shift to the Shoremen’s next opponent on Friday, Berea-Midpark in Avon Lake.

“Berea-Midpark is going to be athletic (and) big up front,” Kostelnik said. “We can’t rest in this conference. This one felt great (but) we have to get ready for Berea-Midpark.”

For Avon, Elder said as much as this loss stings, he and his team have no choice but to put it behind them and move forward. Next up for the Eagles is a road trip to Elyria on Friday.

“The beauty is that we’ve seen (Avon Lake) in the playoffs the last couple of years,” Elder said. “You can hope that you don’t have to live with this for 365 and that you get another crack. We’d sign up to play them every year if we could because it’s fun.”