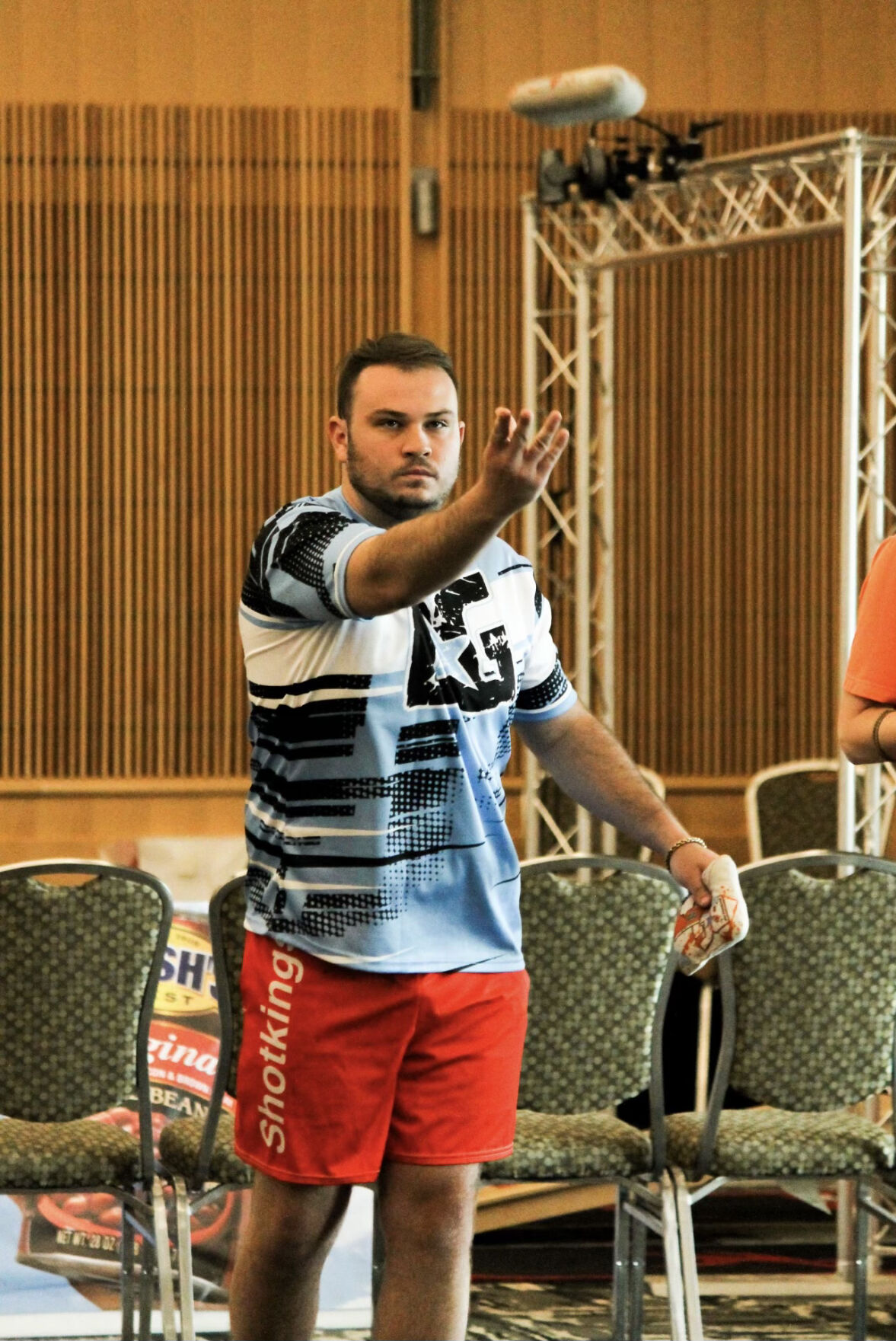 Fairview Park native Timmy Jonas works for a medical sales company by day, but hopes to eventually turn his athletic passion, cornhole, into a full-time gig. 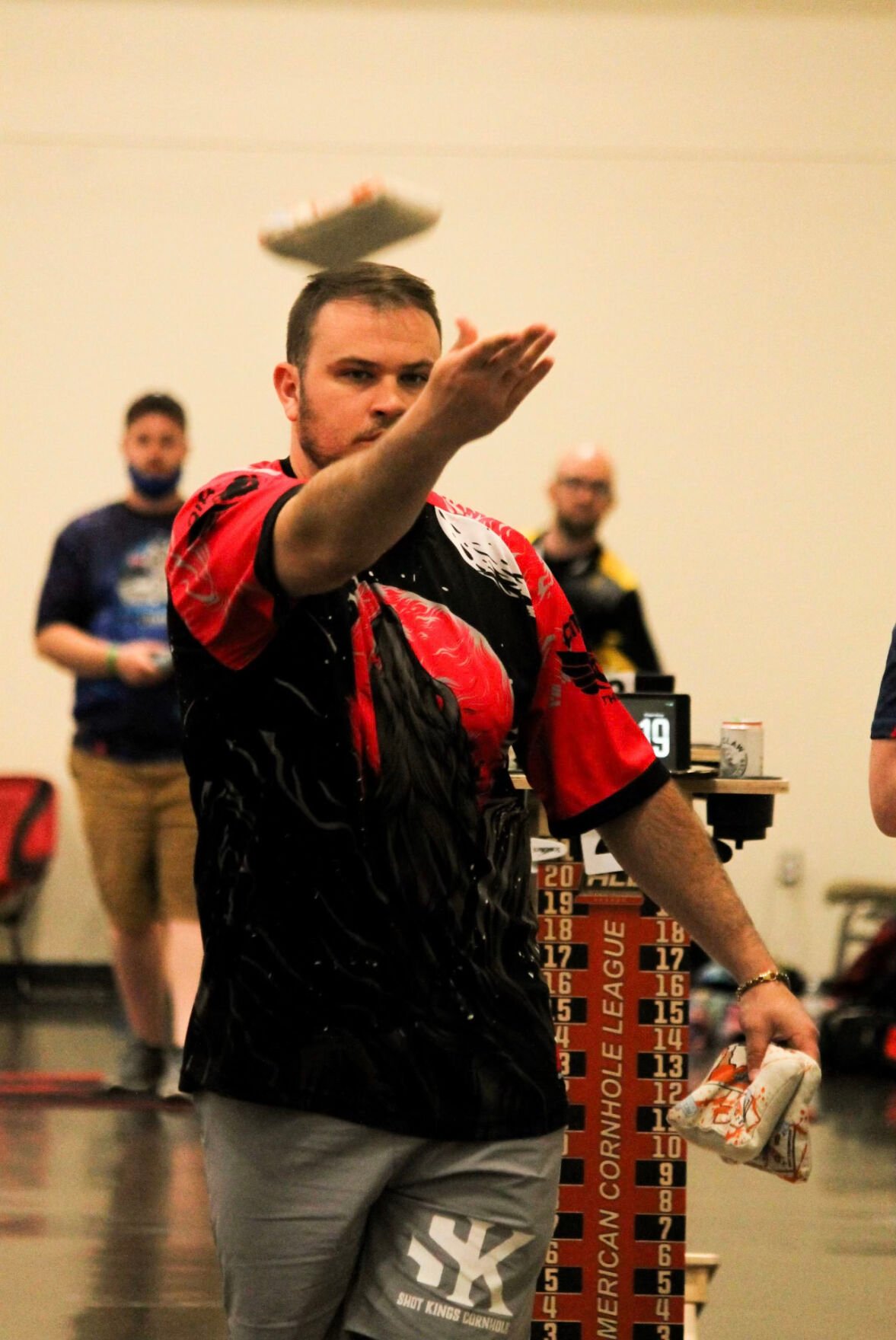 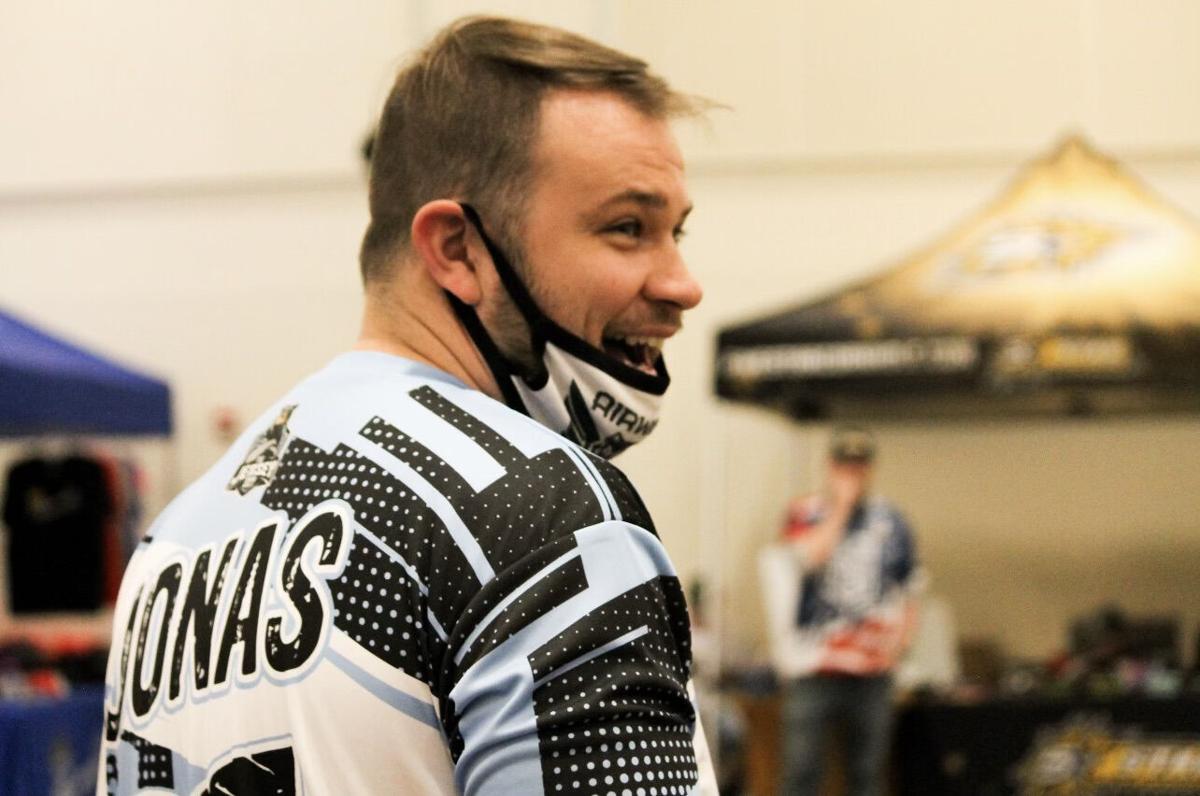 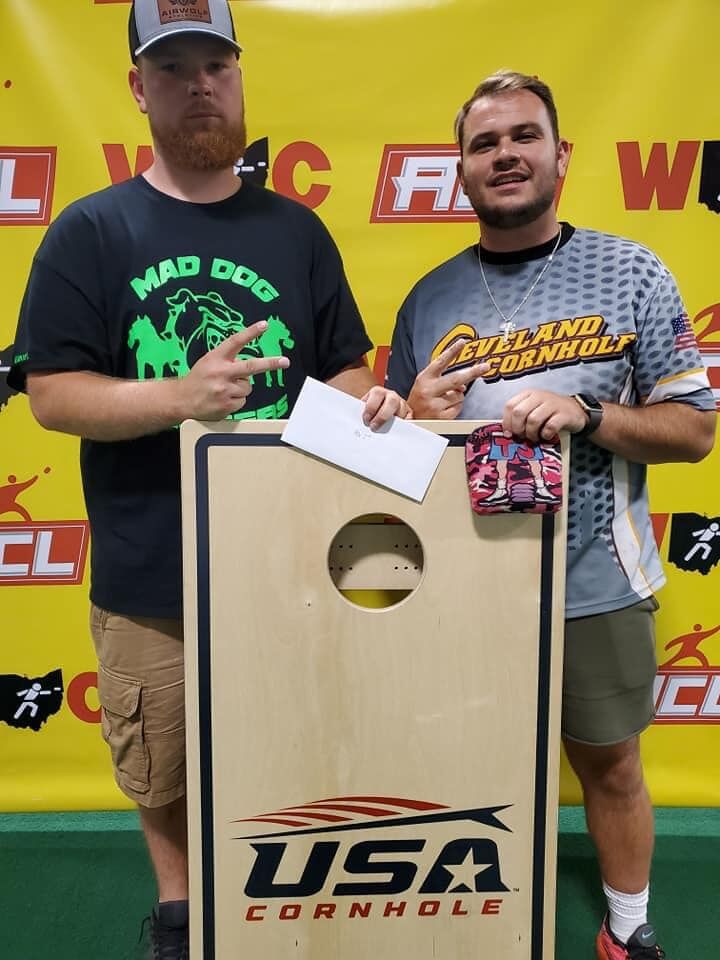 Jonas, right, and partner Eric Anderson, have emerged as two of the top throwers in the Cleveland area, placing at or near the top of numerous tournaments sanctioned by the ACL-affiliated Cleveland Cornhole organization.

Fairview Park native Timmy Jonas works for a medical sales company by day, but hopes to eventually turn his athletic passion, cornhole, into a full-time gig.

Jonas, right, and partner Eric Anderson, have emerged as two of the top throwers in the Cleveland area, placing at or near the top of numerous tournaments sanctioned by the ACL-affiliated Cleveland Cornhole organization.

Timmy Jonas had the same daydreams growing up in Fairview Park that many kids have.

He’d envision hitting a game-winning shot on the basketball court or burying a title-clinching goal on the soccer pitch in front of a nationwide TV audience. Fans would recognize him in public and introduce themselves, letting him know how impressed they were with his play.

Now 24, Jonas is a territory manager for an Indianapolis-based medical sales company who shares a home in Parma with his longtime girlfriend, Nicole Pratt. But he can also say that he’s lived his daydream, even if it didn’t happen exactly as he imagined.

Jonas has appeared on ESPN, cultivated a thriving social media following, gained sponsorships and trekked around the country showing off his skills.

But not by playing basketball, soccer or baseball. He’s a professional cornhole player, throwing bags with precision as part of the American Cornhole League.

“We get to travel all over the country for it, and it’s awesome,” said Jonas, a first-year pro.

Though sports have played a big role in his life, cornhole wasn’t on Jonas’ radar until 2018. He graduated from St. Edward High School in Lakewood, where he played soccer,basketball and baseball. He continued with soccer at Baldwin Wallace University in Berea before graduating in 2019.

“I always pictured the typical kid’s dream, playing one of those sports professionally,” Jonas said. “All of a sudden I picked up cornhole, got good at it quickly and two-and-a-half years later started playing pro and it’s been awesome.”

Like horseshoes, cornhole either can be played by two individuals or by two teams of two people. Players take turns throwing four cloth bags filled with plastic resin at raised wooden boards, placed 27 feet apart. There is a hole near the top of each board, which will net a player three points if he or she launches a bag through it.

A bag that lands on the board safely scores one point, and opponents typically play to a score of 21, or in the case of some tournaments, the highest score after a specific number of rounds.

Jonas discovered his passion at an event called the Taco Festival, held at the Northfield Park racetrack, which had a cornhole tournament. He and a friend entered the tournament, and the man running it – also one of the national directors for the American Cornhole League – was impressed with Jonas’ play.

Following the Taco Festival, Jonas started competing in tournaments run by Cleveland Cornhole, an ACL conduit that hosts leagues and tournaments locally from September to June. The ACL itself was formed in 2018 and has since gained sponsorships from national brands Johnsonville, Bush’s Beans and Mike’s Hard Lemonade.

Jonas competes in league play two days a week at locations booked by Cleveland Cornhole, and a regional tournament once a month. Recent venues have included the Woodside Event Center at St. Michael’s in Broadview Heights and Force Sports in Rocky River.

“The regionals are open to anyone, so pros and non-pros can play,” Jonas said. “Then there are random tournaments at bars and places like that that pop up (throughout the year).”

The ACL tournaments are played all over the country. Broadcast partnerships with the likes of ESPN and CBS Sports have made it possible to watch pros like Jonas and playing partner Eric Anderson ply their trade in front of a growing audience.

That exposure has led to some of those celebrity moments a young Jonas may have daydreamed about, as he gets recognized on occasion for being the guy playing cornhole on ESPN.

While still at BW In 2019, Jonas and then-partner Anthony Kissel finished second in the nationally-televised College Cornhole Championship in Myrtle Beach, S.C. In the spring and summer of 2020, when COVID-19 forced the postponements of just about every sport at every level, Jonas and his fellow throwers in the ACL could still be seen on TV every weekend, wearing masks and staying socially distanced at venues that didn’t allow for spectators.

As it turns out, Cornhole is the type of game designed to weather a pandemic.

“As bad as (COVID) was, the ACL took advantage and really blew the sport up,” said Jonas’ partner, Anderson, an Old Brooklyn resident and currently the 15th-ranked pro in the country. “They implemented a few things for the tournaments. You had to step in and out of the box (between throws), we couldn’t get our own bags, stuff like that.”

Jonas throws bags every day, whether it’s a practice round at home or a league match. Along with Pratt, also an avid player, the two have started using the popular social media app, Tik Tok, to show off trick shots, fundamentals or even just goof around – so long as the theme is cornhole. For example, one entry that can be found at @tjcornhole is Jonas working out at a Planet Fitness, lifting bags instead of weights. Posts have generated as many as 160,000 views.

With exposure has come sponsorships for Jonas. He throws bags provided by Wadsworth-based BG Cornhole and wears gear crafted by Shot Kings, Airwolf Athletics and AirMail. Those brands help cover his travel expenses for ACL events and give him a kickback whenever someone buys a product using special codes he posts to his social media accounts on Tik Tok, Facebook and Instagram.

Anderson, 25, has also garnered a number of sponsors since becoming one of the ACL’s first 20 pros in 2018. He’s turned cornhole into a full-time job, working for BG Cornhole by day while maintaining a full tournament schedule. Though prize money can be a little light at many tournaments, payouts can reach as high as $50,000. In 2020, the ACL awarded over $250,000 in prize winnings.

At the Cleveland Cornhole June regional, Anderson won the advanced singles tournament, while Jonas placed fourth out of a field of 23. They teamed up to win the advanced doubles tournament. Anderson competed at the ACL’s Austin Open in Texas June 25-27, tying for third in pro singles while teaming up with Virginia native Ryan Smith to take second in the doubles bracket.

Both have their sights set on the continued evolution of the pro game, and hope it can eventually become a true career for the top players, similar to the PGA Tour or Professional Bowlers Association, with bigger payouts and more national sponsors.

“The next step is for the players, no matter what their finish, to make some good money,” Jonas said. “The ACL started this thing called USA Cornhole, so they’re trying to push other countries to get involved in cornhole so it can become an Olympic sport.”

Anderson would also like to see the male-dominated sport diversify.

“Diversity is huge, and we need more women to play,” he said. “I think they really just need to show the opportunity of what’s there and really make people locally think ‘I can do that’. We could even do camps and things locally and network more. We don’t network enough. We could do charity work, stuff like that.”

To learn more about the ACL, visit www.iplaycornhole.com. Jonas (@timjcornhole) and Anderson (Eric Anderson - ACL Pro) can both be found on Facebook. Pratt co-hosts an all-female cornhole podcast called Girls Throw Too.

“Cornhole has opened doors to where I never thought I could be,” Anderson said. “I always loved basketball, but knew I was never going to be good enough to make it. This fills that void for me, gave what I was looking for. It’s crazy where cornhole’s taken me, where I can do it full-time. It’s really surreal.”

Cornhole at a glance (per the ACL)

-For competitive play, place a set of cornhole boards 27 feet apart from front edge to front edge. Beginners, juniors and recreational players may want to start at a shorter distance. We recommend decreasing the distance in three foot increments to find a comfortable beginning playing distance.

-There are four bags per set. Two sets of different colors are needed to play singles or doubles.

-Bags that hit the ground prior to landing on the board or going into the hole do not count.

-Any bag hanging off the board and touching the ground does not count.

-Any bag hanging in the hole only counts as 1 point.

-Cancellation scoring is used at the end of each round. After all 8 bags have been thrown, the score is calculated based on the bags that remain on the board and have gone in the hole. If Team A has 4 points and Team B has 3 points, Team A will get 1 point.

-Coin toss takes all. The player that wins the coin toss choses the initial side of board to throw from and whether to start out throwing first or second.

-Players will alternate throwing their four bags down to the board on the other end.

-Throwing out of turn or outside the throwing box is a foul. The bag that was thrown when the foul occurred does not count and is immediately removed from play.

What’s in an ACL cornhole bag?

-Inside material must be plastic resin only. No metal or foreign objects including but not limited to copper, lead, aluminum, rocks, BBs etc. Plastic resin is the only acceptable form of fill for bags. A bag with any material other than what is acceptable will not pass inspection.

-Bags must have a clear visible logo; Bags with faded or missing logos are not acceptable and will not pass inspection.

-Bags must not have loose threading of more than 1/8th of an inch from its seam. Loose threading can be grounds for bags not passing inspection.