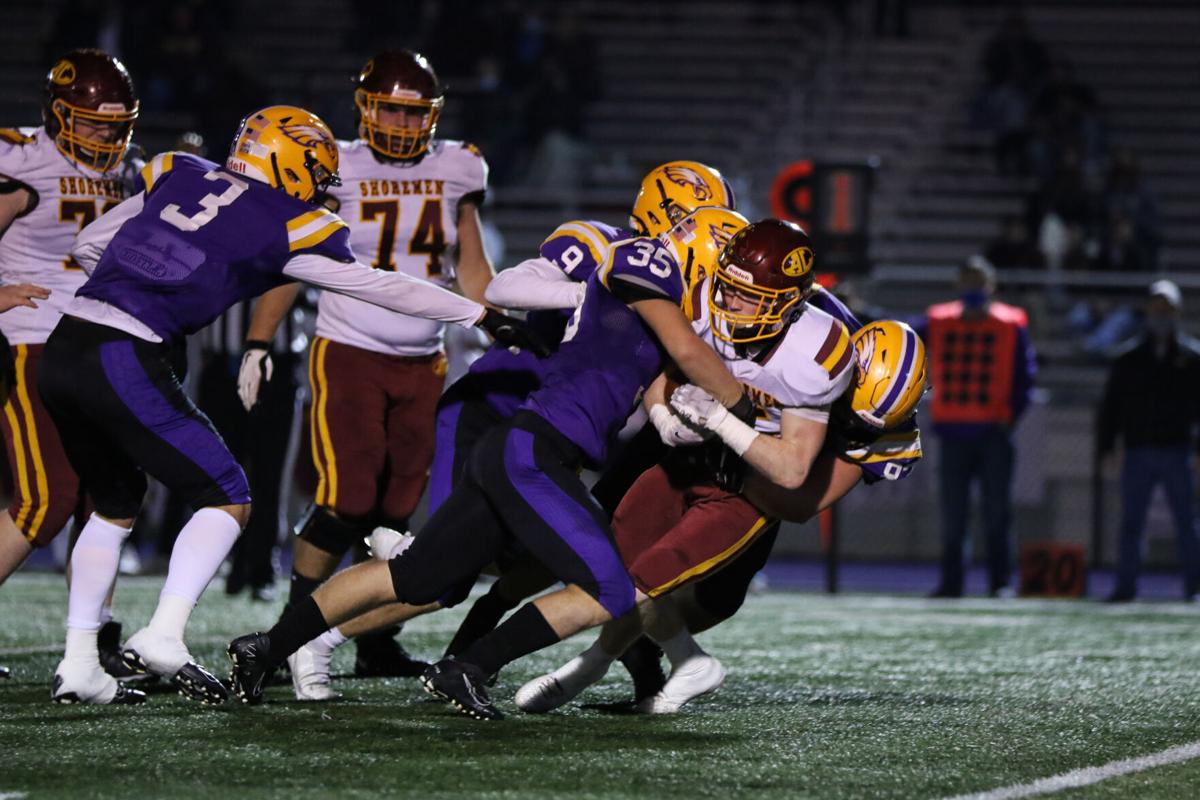 Gang tackles were a common theme of the second half of last Friday’s Division II, Region 6 semifinal. The Avon defense held rival Avon Lake to 38 total yards after halftime. 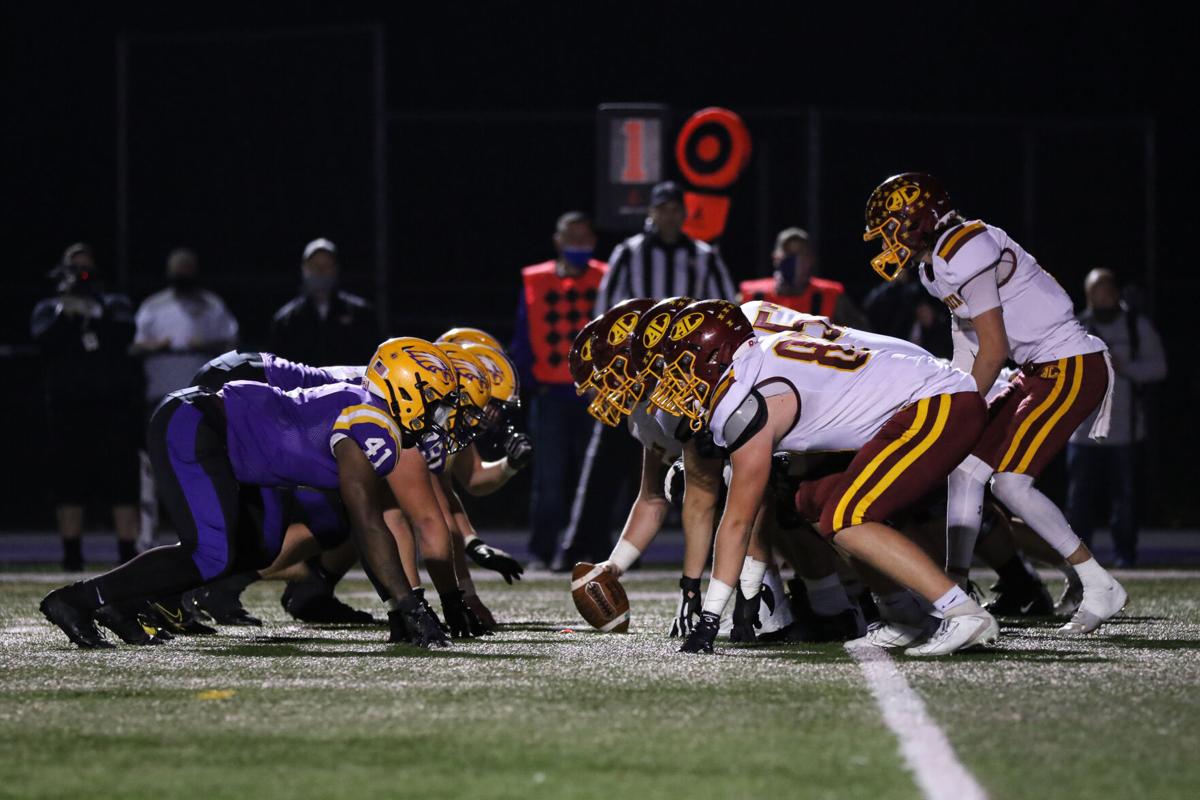 In the second half of its last three playoff games, Avon’s defense has given up a combined 17 points. Last week in the Division II, Region 6 final, it held the usually-explosive Avon Lake offense to three points after halftime.

Gang tackles were a common theme of the second half of last Friday’s Division II, Region 6 semifinal. The Avon defense held rival Avon Lake to 38 total yards after halftime.

In the second half of its last three playoff games, Avon’s defense has given up a combined 17 points. Last week in the Division II, Region 6 final, it held the usually-explosive Avon Lake offense to three points after halftime.

Through three playoff games, the Avon football team’s offense has at times been explosive.

But when the time has come to put away a contest and advance in the Division II, Region 6 bracket, the Eagles have leaned on a defense that has become a brick wall in second halves.

Last Friday in a 17-14 win over Avon Lake in the Region 6 final, defense once again made the difference, as the Eagles held the Shoremen to 38 yards and three points in the second half.

“I think our defensive staff does as good a job as anybody of making adjustments,” Eagles coach Mike Elder said. “I was nervous at halftime because they were running the ball, and we were not. The team that can generally establish a better run game is probably going to come out on top. But our defense made tremendous adjustments in the second half to stop them from running the football.”

The Shoremen entered averaging 354.8 yards and 37.7 points per contest, with a thunder-and-lightning rushing combo of Mason Wheeler (386 yards) and Gage Duesler (831), who’d combined for 19 touchdowns over a nine-game stretch. In the second half, the Eagles held the pair to 18 yards, clogging up the middle of the field after they’d been gouged for 137 yards in the first half.

“They went from gouging us to nothing, so big shout out to our defense, our defensive line, our linebackers, guys playing downhill and flying to the ball,” Elder said.

The Eagles sacked Shoremen quarterback Michael Corbo four times in the contest, including twice in the second half by two-way standout Devon Hunter, who leads the team in rushing and also plays inside linebacker.

“In the first half, we were letting our emotions get the best of us a little bit”, said Eagles senior lineman Mason Bingham, who recorded a sack of Shoremen quarterback Michael Corbo and helped anchor the defensive effort. “In the second half, we just had to settle down our emotions and focus on our assignments and trusting our guys. Our defense is all about trust, because we’ve got trust in one another that, if a guy does his assignment, then they’re not going to get the ball moving”.

The defense’s performance shouldn’t have been a surprise, as it had performed in a similarly stifling way in its previous two playoff games.

In the second half of a come-from-behind 31-28 victory over Brecksville-Broadview Heights Oct. 30, a Bees team that averaged 38 points and 449 yards per contest was held well below those marks, and was shut out for all but 52 seconds of the decisive fourth quarter.

On their last three drives, the Bees lost a fumble, punted and turned the ball over on downs. When the Eagles defeated Medina Highland Oct. 23, a Hornets offense that scored more than 30 points and gained nearly 370 yards per game only managed four drives in the second half, with two ending in punts and the other two in turnovers on downs.

Most importantly, they were shut out over that game’s final 24 minutes as the Eagles, burned at times in the first half, showed that they could tighten up when the season was hanging in the balance.

“Our defense is great with adjustments, our coaches are great and they just played their hearts out and emptied the tank,” said Eagles quarterback Niko Pappas, who has also lined up at safety at times.

This Friday, the Eagles (10-0) will play a Division II state semifinal for the fourth consecutive year, against another high-powered offense in Akron Archbishop Hoban (9-0). Winners of four consecutive state championships between Divisions II and III from 2015-18, the Knights average 39.1 points and boast a similarly stingy defense to the Eagles, allowing 6.7 points per game through nine contests.

Avon and Hoban have met twice in the state semifinal previously, with Hoban winning 30-6 in 2017 and 42-7 in 2018. No matter what, though, the Eagles have been enjoying being on the field together for at least a little longer.

“I’m just so happy that we won,” Bingham said. “We’ve got one more week together, with our seniors and the rest of our team.”