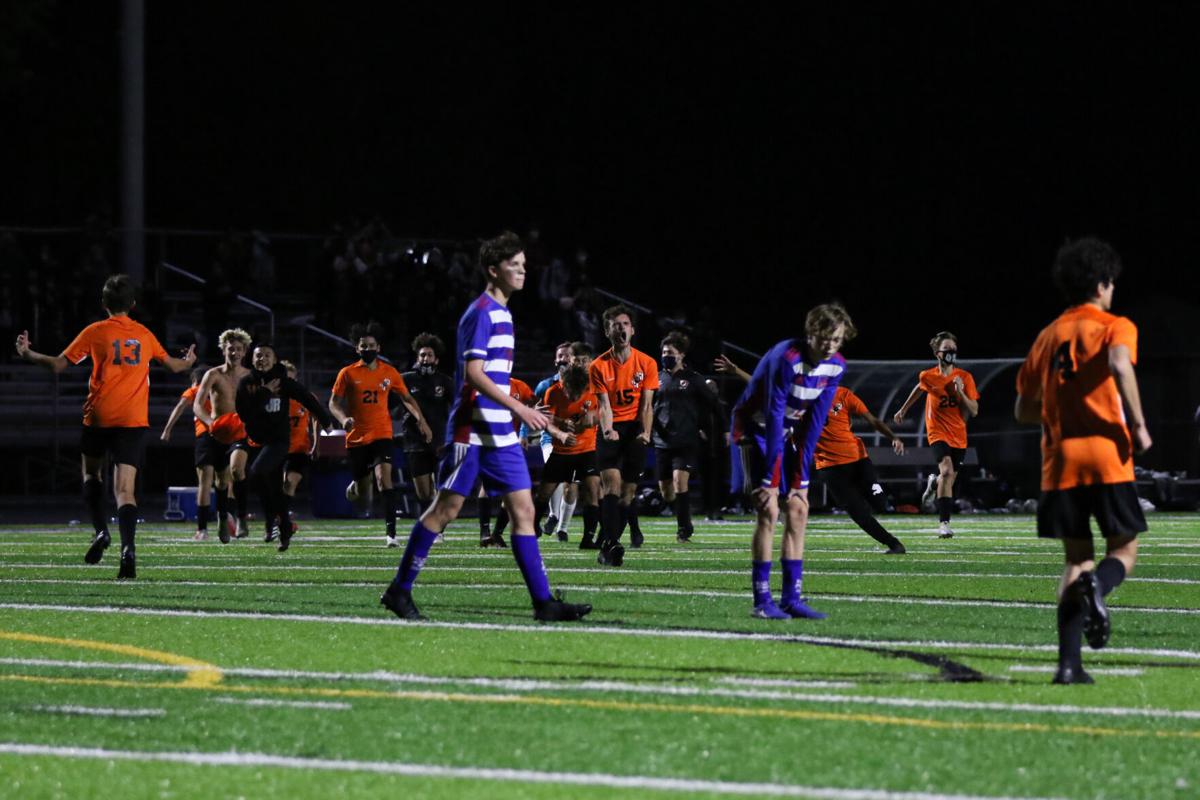 Despite controlling possession and outshooting visiting Warren Howland 12-5, the Bay Rockets were upset in a Division II regional semifinal at home Nov. 4. 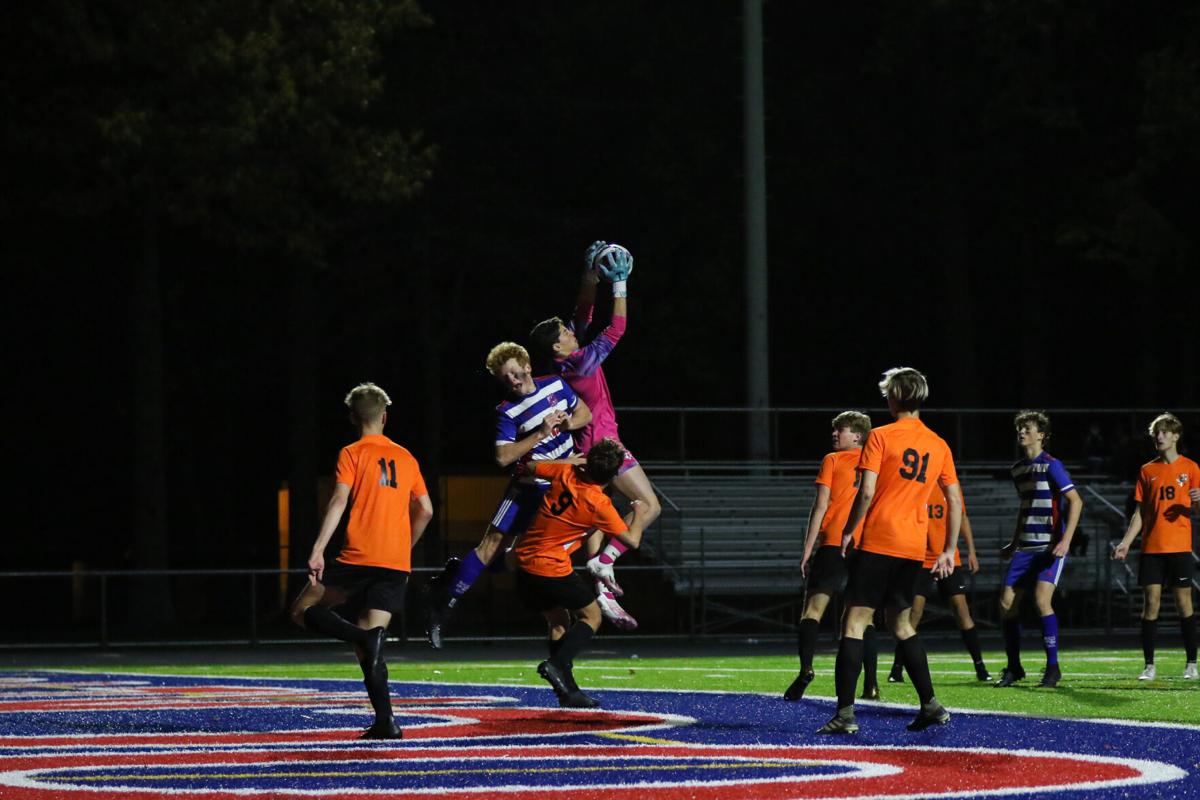 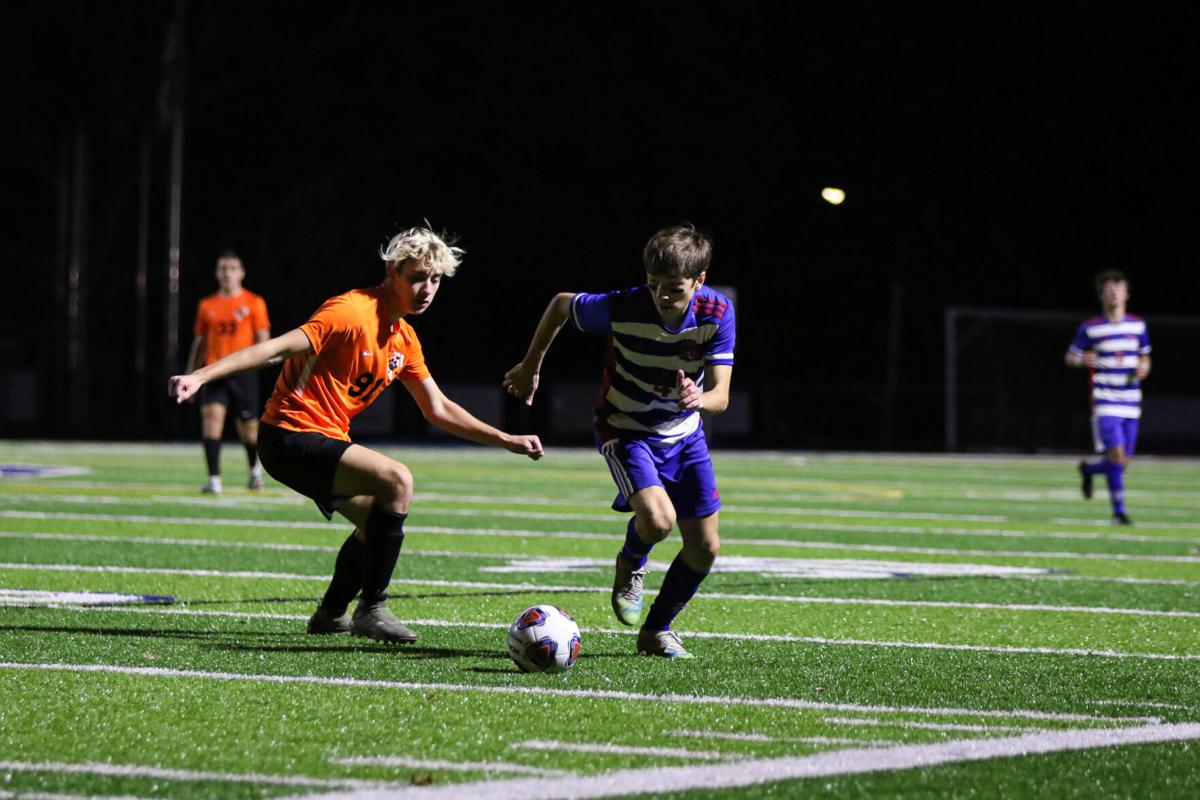 Bay junior midfielder Danny Kruzer tallied three goals and seven assists during the regular season, but was one of many Rockets weapons held without a point by Warren Howland in a Division II regional semifinal last week. 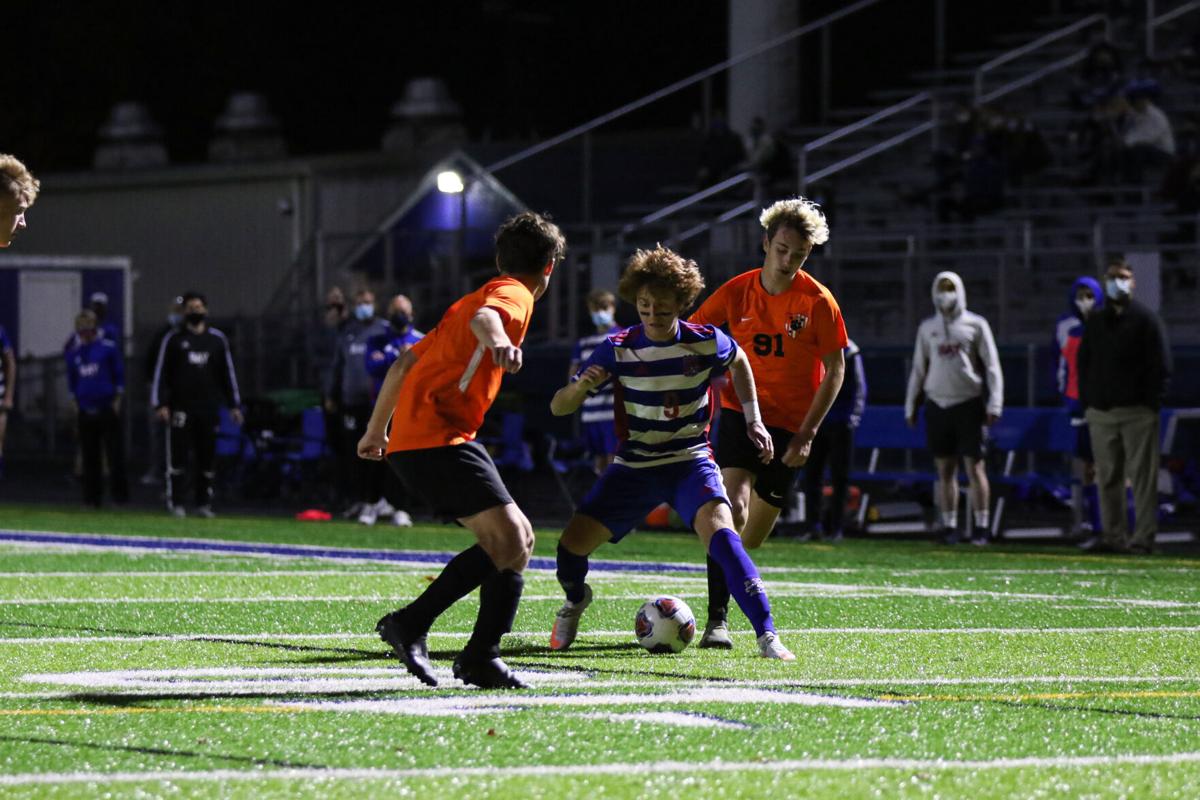 Bay senior midfielder Matt DeCapua was met with double-teams much like the one pictured during last week’s Division II regional semifinal loss to Warren Howland. 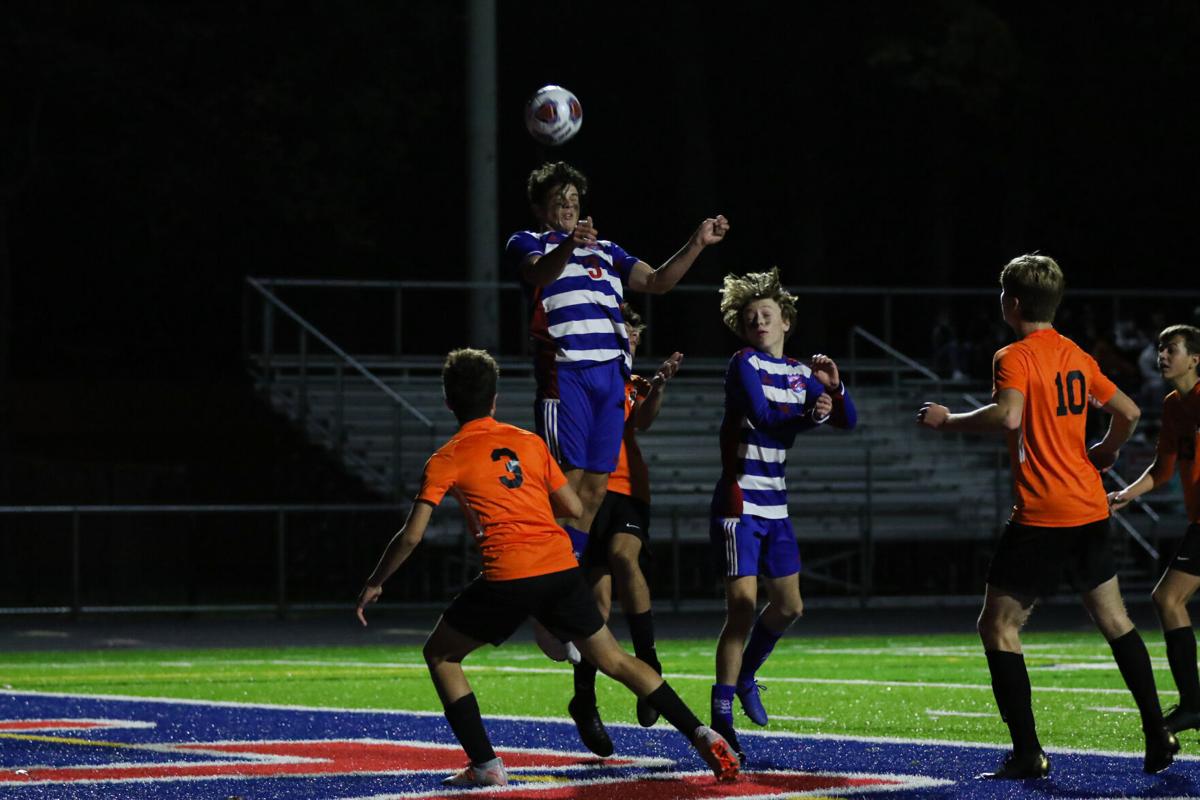 Bay senior and leading scorer Brock Pickett was able to get off this header during last week’s Division II regional semifinal against Warren Howland, but was double and triple-teamed most of the game.

Despite controlling possession and outshooting visiting Warren Howland 12-5, the Bay Rockets were upset in a Division II regional semifinal at home Nov. 4.

Bay junior midfielder Danny Kruzer tallied three goals and seven assists during the regular season, but was one of many Rockets weapons held without a point by Warren Howland in a Division II regional semifinal last week.

Bay senior midfielder Matt DeCapua was met with double-teams much like the one pictured during last week’s Division II regional semifinal loss to Warren Howland.

Bay senior and leading scorer Brock Pickett was able to get off this header during last week’s Division II regional semifinal against Warren Howland, but was double and triple-teamed most of the game.

The official record of the Bay boys soccer team’s Nov. 4 match will show that it didn’t allow a single shot on goal during the run of play.

But the one on-target strike the Rockets did surrender in their Division II regional semifinal against visiting Warren Howland, a penalty kick in the 46th minute, proved to be a heartbreaker.

Tigers senior and leading scorer Gabriel Altawil took the decisive shot, sending the ball just left of Rockets goalie Alec Carras and into the net for a 1-0 lead that would eventually go final.

“We knew from watching Bay (on film) that it was going to be one heck of a battle,” Tigers coach Brian Stiles said. “They’re a great team, and we did what we could do to stay with them. We stuck to our game plan and got that fortunate penalty kick in the second half.”

The upset was Bay’s (15-2) third total loss in two years, and marked the end of the 2020 season for the state’s top-ranked team in Division II. Ranked second in the state, the Tigers (19-0-1) went on to host Chagrin Falls (18-2) last Saturday with a spot in the state’s final four on the line.

And the way Altawil’s scoring chance came about left the Rockets stinging. The penalty kick was awarded after an obstruction foul was called in the box on Aidan Bush while he got tangled up with a Tiger player who was trying to get to a through-ball. Bush was shown a yellow card–one of four issued to the team during the game–and the Rockets were suddenly placed in the unfamiliar position of playing from behind.

“It was an obstruction. We stepped in front and it should’ve been an indirect kick,” Rockets coach Bobby Dougherty said. “It’s a bad call. (The official) said (Bush) pushed (the Howland player), but he was in front of him. The video’s going to show it, but it is what it is. In that moment, did (Bush) have to go in that hard? The problem was, we should’ve won that headball. It should’ve never hit the ground. So, don’t make that referee’s call or non-call the decision-maker in the game.”

Bay largely controlled possession throughout the game as the Tigers dropped most of their lineup into a more defensive position, a tactic the dynamic Rockets and their many scoring threats had become accustomed to over the course of the season. They outshot the Tigers 2-1 on goal and generated 12 attempts overall to Howland’s five, but were unable to get a ball past keeper Lucas Brill (two saves) and the swarming defenders in front of him.

The Rockets even took five corner kicks, missing all of them. After Altawil’s goal, Matt DeCapua nearly answered in the 49th minute when his shot skidded wide left of the goal. In the 54th minute, Holden Eckert’s header off a Brock Pickett throw-in sailed just over the crossbar. A strike by Eckert from 20 yards away in the 77th was briefly bobbled in front of the net by Brill, causing an audible gasp in the home stands before he secured it.

“That’s the brutal part of this game. This game sucks,” Dougherty said with a laugh. “You can dominate possession, dominate shooting, put stuff on frame and do all the things you’re supposed to do. We don’t give up a shot and we still lose. Explain that to someone. It is a horrible, horrible game that manages to kick you in the teeth every now and again. But I told the boys, I’m so proud of them. We came back, we had our chances, but it is what it is. It’s a tough game.”

Pickett, Bay’s leading scorer with 31 goals and 21 assists, was marked by two to three defenders all evening, removing a key cog from Dougherty’s explosive attack.

“We hadn’t really been tested the entire year defensively, so it was kind of surprising,” Stiles said of his defense’s effort. “We knew we had some talent back there...I think the final 34 minutes (after the penalty kick), it felt like we played three games.”

“You spend a lifetime with these boys,” Dougherty said. “Nolan Sooy’s been on our sideline since he was able to walk. Matty DeCapua, I coached him when he was six, seven-years-old. You look at all these kids, like Holden Eckert who does a great job for us, and Kapalczynski who’s a tough kid. Every one of them, you spent a lifetime with them since they were five or six-years-old. It hurts your heart if they don’t get what they want or what they’ve worked hard for. That’s the toughest part with it. I’ve been doing this for 30 years and it doesn’t get any easier.”

Shoremen shut out in Medina

In a Division I regional semifinal, Avon Lake boys soccer team’s season came to an end when area power Medina won 4-0 on Nov. 4.

Medina went on to host Findlay last Saturday in a regional final. Shormen seniors Tyler Johnson, Cullen and Liam Reutter, Sean Graney, Zachary Ramsey and Logan Allemeier played their final match in what has been one of the most successful stretches in program history.