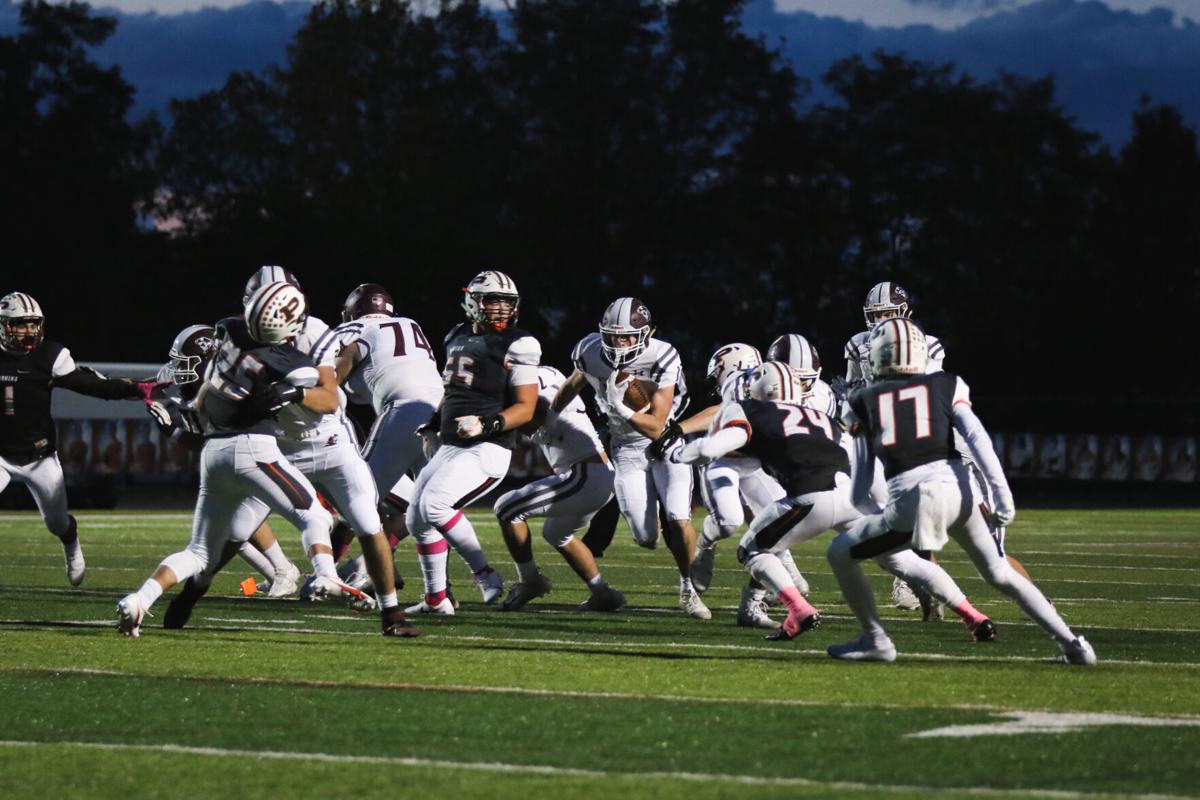 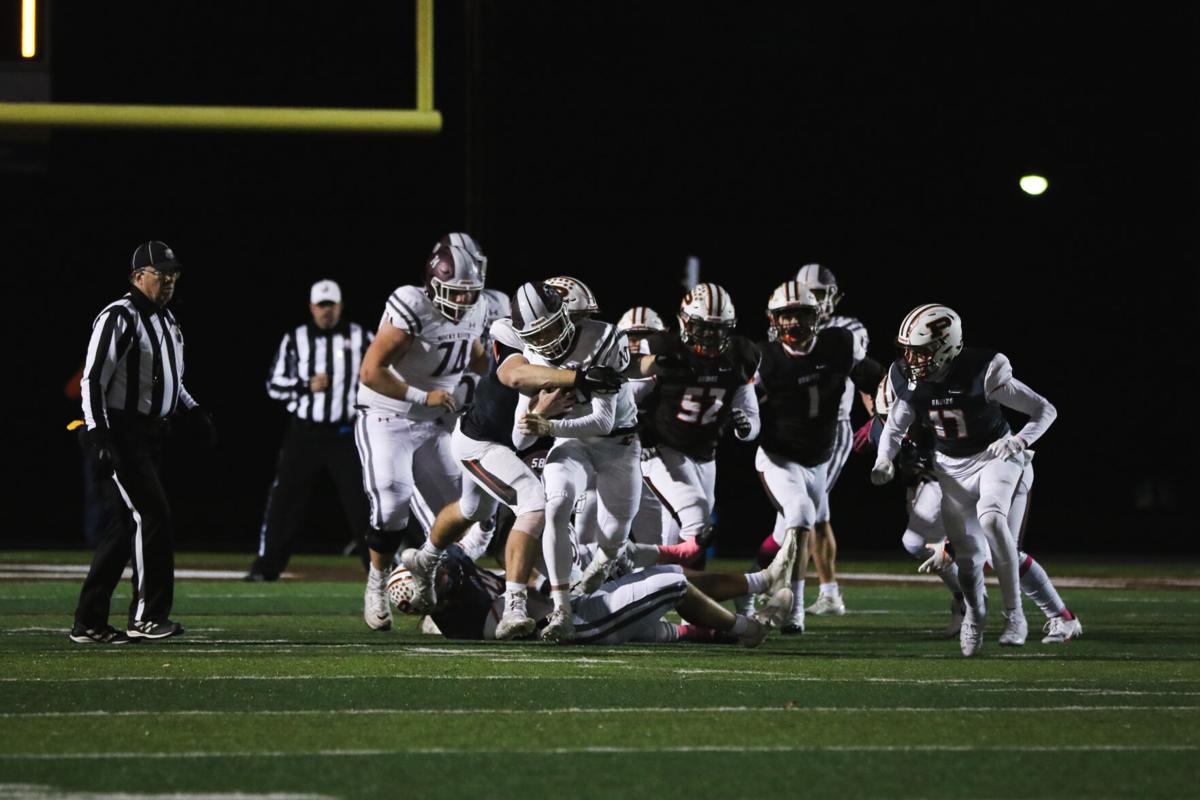 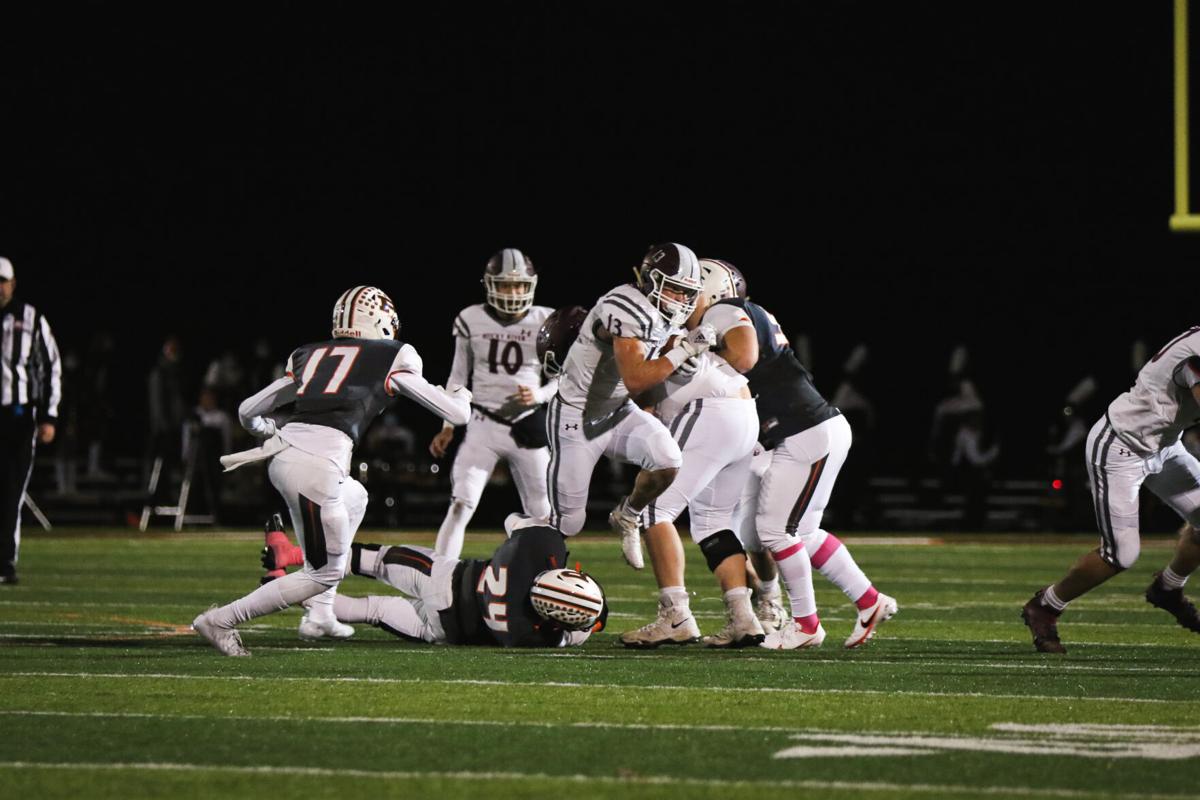 In his first game back since Week 2 of the season, Rocky River running back Tommy Bebie (center) rushed for 53 yards. The Pirates went on to lose last Friday’s Division III, Region 10 playoff game to Padua, 28-9. 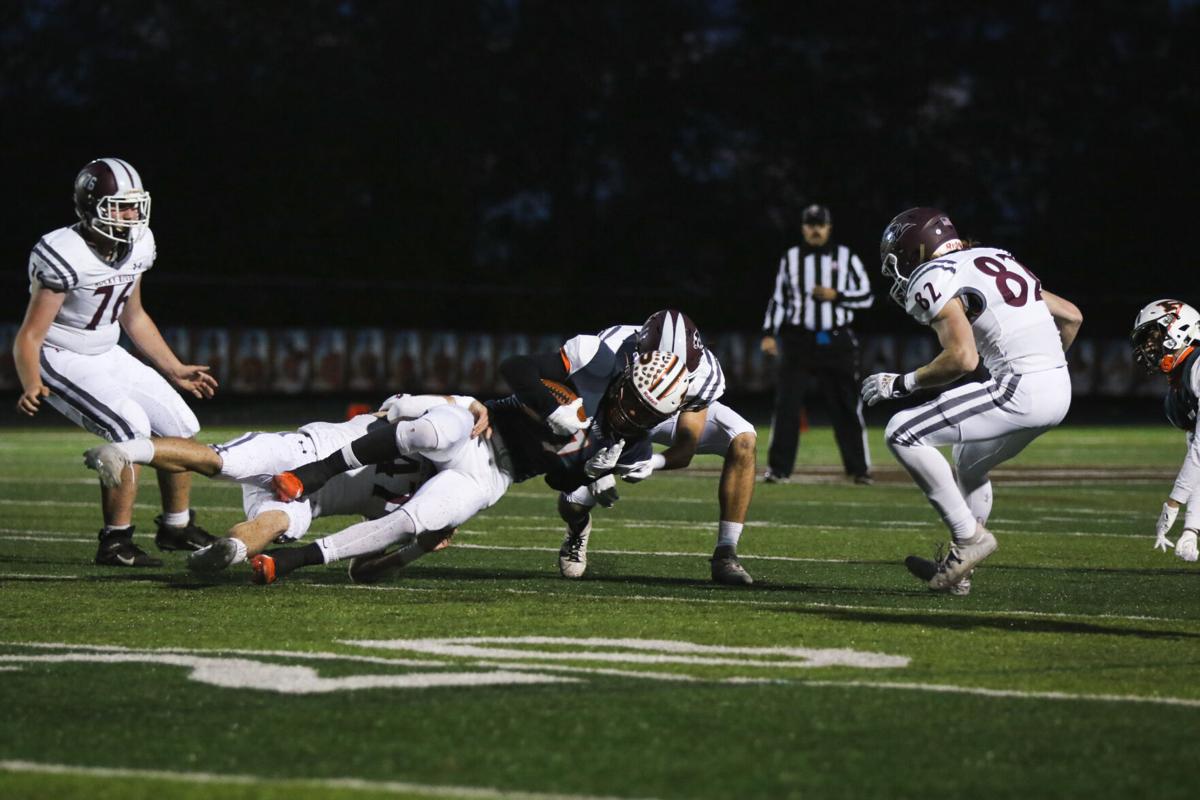 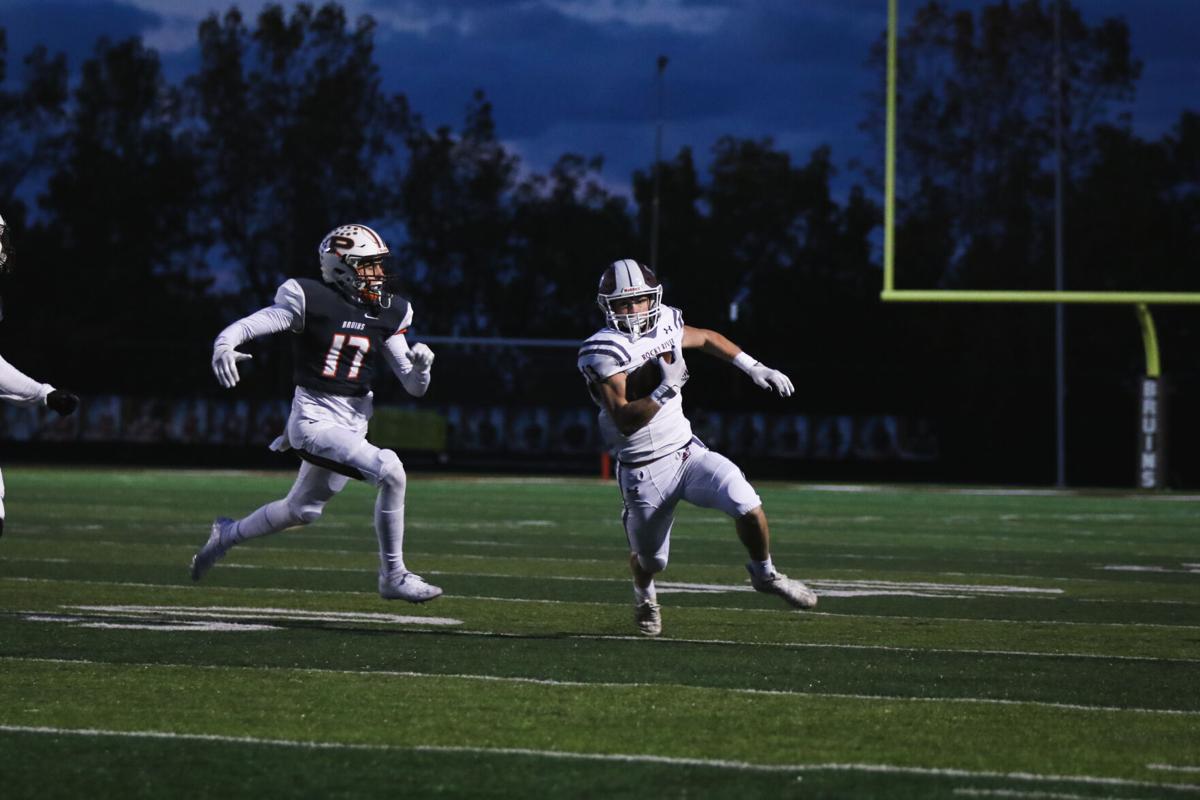 In his first game back since Week 2 of the season, Rocky River running back Tommy Bebie (center) rushed for 53 yards. The Pirates went on to lose last Friday’s Division III, Region 10 playoff game to Padua, 28-9.

Big plays weren’t what did in the Rocky River football team last Friday.

Rather, it was a series of short gains that grew bigger as time passed in its Division III, Region 10 second-round playoff game at Padua. Methodically, the fourth-seeded Bruins got push up front, springing hulking six-foot, 200-pound running back Alec Buehner through traffic.

The chains continued to move, the 13-seeded Pirates (4-2) defense continued to tire, and before long, a one-score game in the third quarter was separated by three scores. The end result was a 28-9 Bruins (5-1) victory that propelled them into a Region 10 quarterfinal this Friday at 7 p.m. at home against 12-seed Millersburg West Holmes.

“(Padua) has a lot of size up front, and we just wore down by the end of the game,” Pirates coach Josh Wells said. “But our kids fought hard. I’m proud of our kids. We had our chances, but it’s playoff football and they capitalized and we didn’t.”

Buehner, who Bruins coach Mike Polevacik described as “no fun to tackle”, did the most damage to the Pirates’ playoff hopes, rushing for 222 yards and a pair of second half touchdowns on 34 carries that put the game out of reach. He wound up accounting for just over half of the team’s 439 offensive yards.

“I think our offensive line’s tremendous, I think our tailback’s tremendous and they had great nights,” Bruins coach Mike Polevacik said. “We were able to keep moving the chains when we needed to and control the game. It wasn’t an easy game and it wasn’t a blowout. We felt like we were in control, but it wasn’t easy.”

Despite the outcome, the Pirates had chances to steal the game’s momentum for themselves. Mack Massad lofted the game’s opening kickoff high and short, giving the Pirates’ special teamers the time to recover the ball in Bruin territory, stunning the hosts. Massad finished the drive with a 30-yard field goal to put his team ahead 3-0 less than four minutes in the game.

Then came Padua’s first display of methodical offense. It responded with a 14-play drive that covered 76 yards in just over six minutes, ending in quarterback Sam Ehrbar shoving his way one yard into the end zone. Now ahead 7-3, the Bruins wouldn’t trail again, and only had two plays reach 10 or more yards.

With seven minutes left in the first half, the Pirates forced a Buehner fumble and recovered it to set up a drive at their own 36, once again attempting to wrestle momentum away. Their ensuing drive resulted in a punt, and the Bruins came back with a 10-play, 80-yard drive that culminated with Ehrbar’s touchdown throw to Daniel Peterson with 13 seconds left in the half for a 14-3 lead.

“We were close (to turning the game),” Wells said. “It was a physical game, and hats off to Padua, they played hard. But our kids competed. It sucks losing, but this was a game I felt we could compete in and even win, and we had our chances and (didn’t finish). We’re still learning.”

Beginning the third quarter with possession, the Pirates weren’t done fighting their way back. They put together an eight-play scoring drive, capped by quarterback Braedon Spies’ shifty 21-yard touchdown run that cut their deficit to 14-9. Spies’ two-point conversion attempt was stopped.

The Pirate defense took the field with fire on the Bruins’ next drive and put them in a 3rd-and-14 hole, but Ehrbar bailed his offense out with a 36-yard completion to Trey DiCicco for a first down. The Pirates forced a 4th-and-2 from their own 2, stuffing Ehrbar’s keeper attempt for a loss and a turnover on downs.

With the game seemingly starting to turn in the Pirates’ favor, they went three-and-out and punted, and Buehner scored on a one-yard run six plays later for a 21-9 lead with 13 seconds left in the third quarter.

“I think our kids have good resolve,” Polevacik said. “I think Coach Wells does a heck of a job. I can tell his team is well-coached, so you knew they weren’t just going to roll over at halftime. But I think our kids responded. We just have a good team. We don’t have players who are Ohio State recruits, but we just have good guys who play together as a team.”

Buehner ran in a five-yard touchdown on the Bruins’ next possession, capping an eight-play drive–all runs–to build a 28-9 lead with 6:16 left.

Spies completed 6 of 16 passes for 42 yards and rushed for 31. In his first game back since getting hurt in Week 2 against Holy Name, Tommy Bebie ran for 53 yards on 14 carries and caught a Spies pass for a 16 yards. With the playoffs now over, the Pirates will return to regular season play and host Great Lakes Conference foe Buckeye this Friday at 7 p.m.