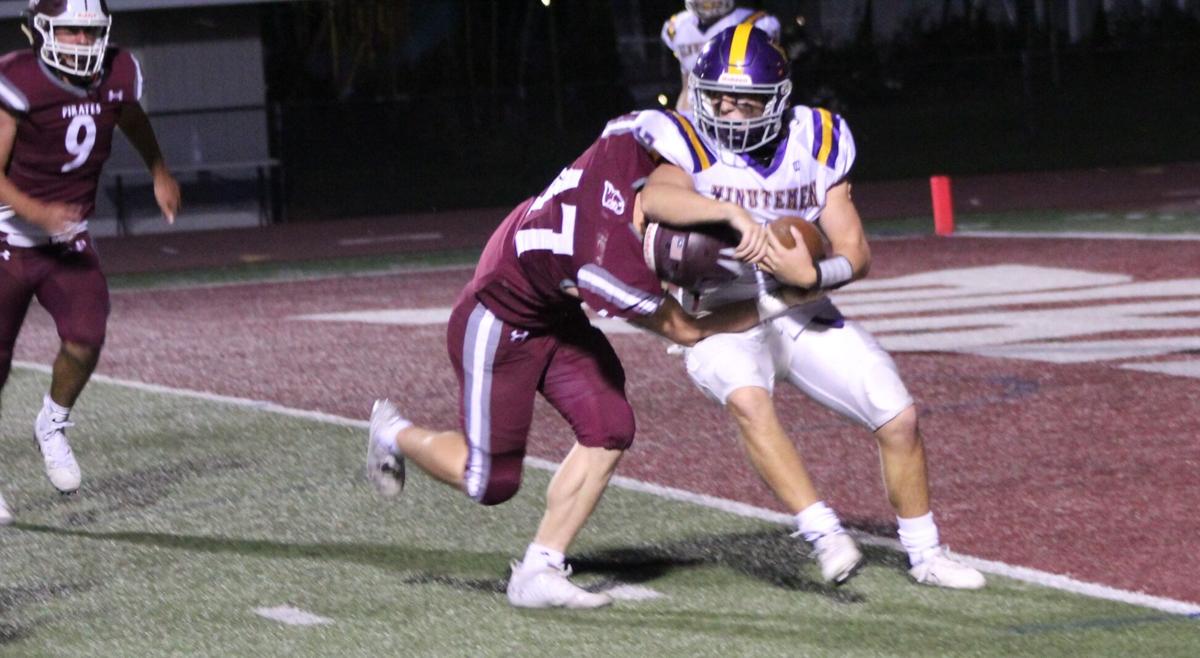 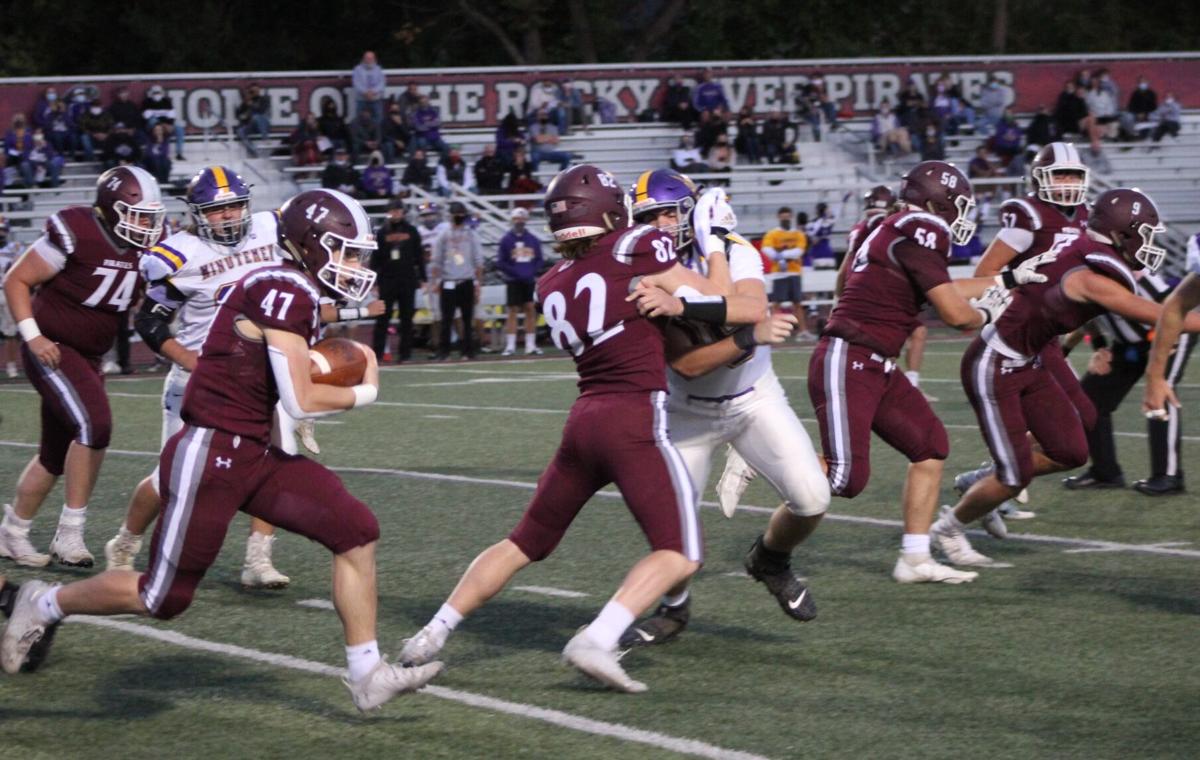 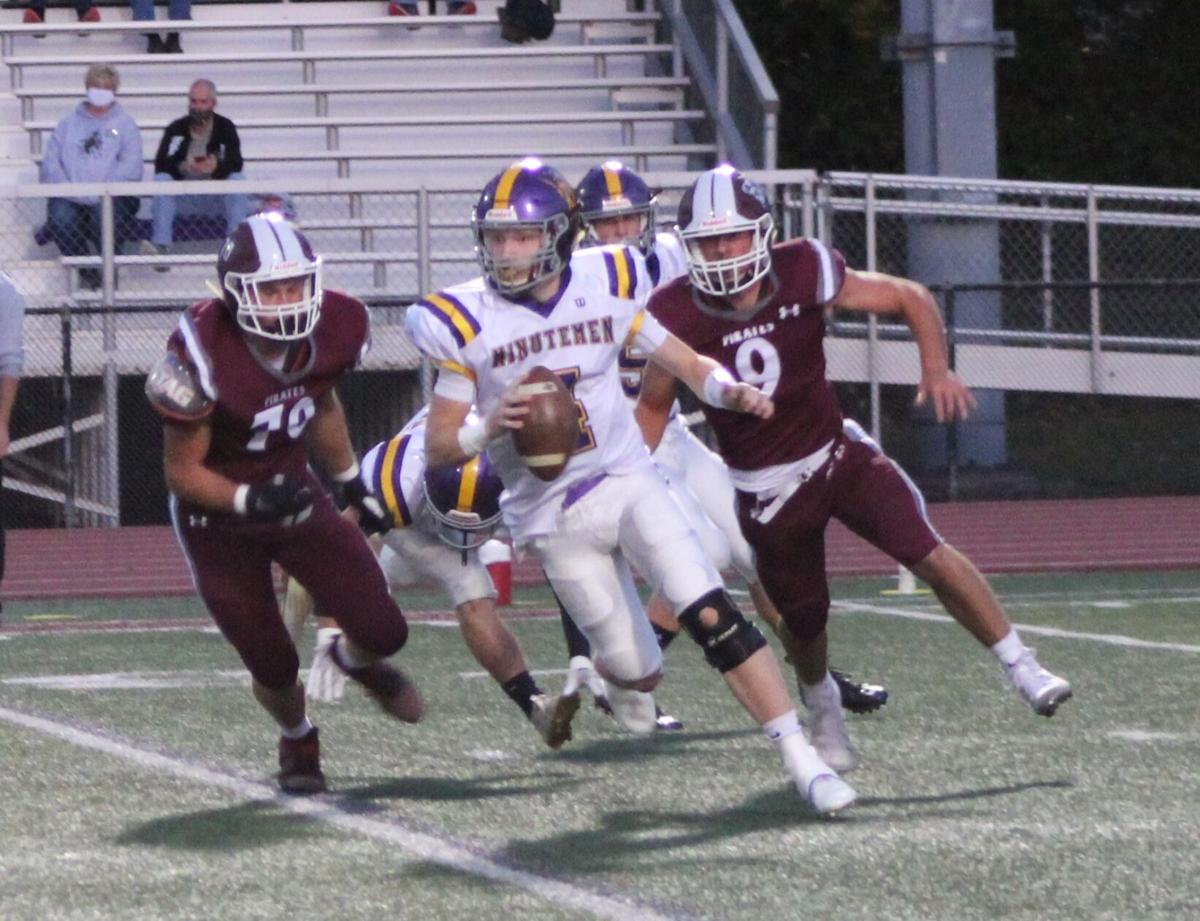 Lexington quarterback Cole Pauley was harrassed all night by the staunch Pirate defenders. 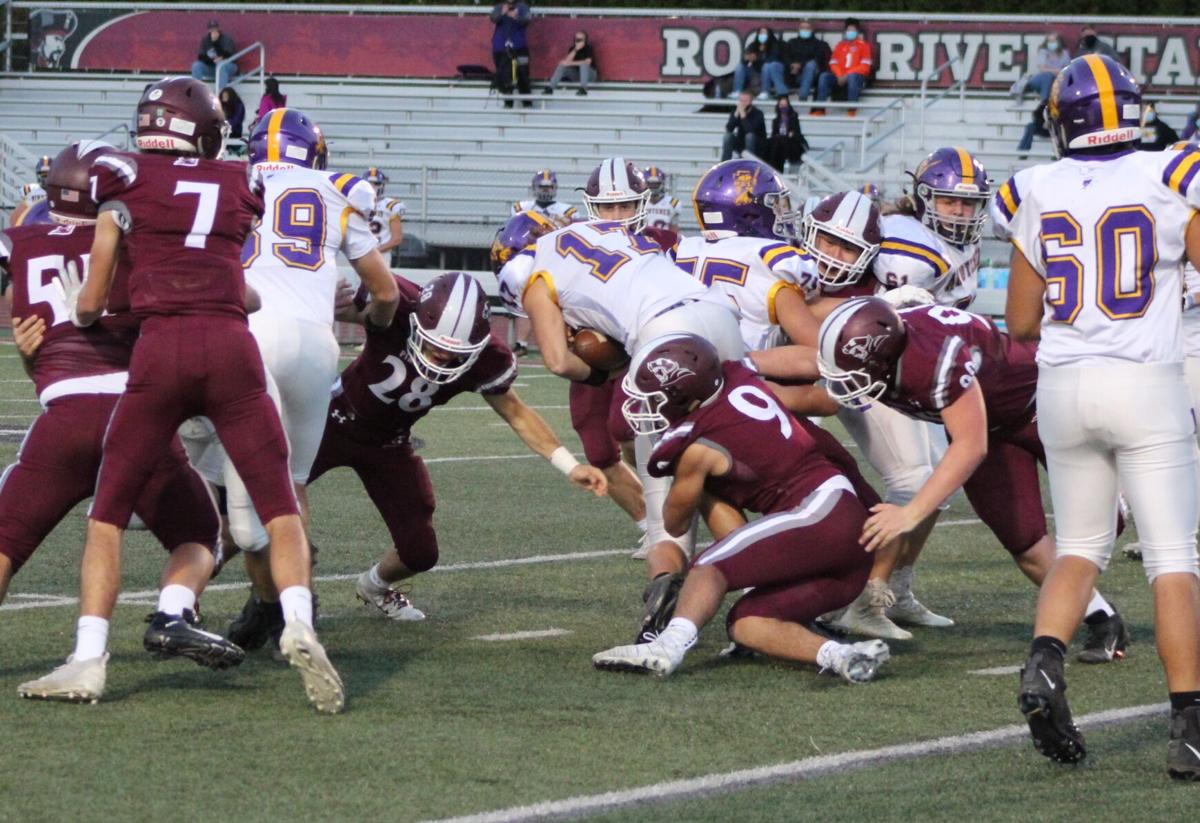 Lexington quarterback Cole Pauley was harrassed all night by the staunch Pirate defenders.

Using a powerful running attack and a smothering defense, the Rocky River Pirates took control of the game in the second half to upend the visiting Lexington Minutemen 29-7 last Friday.

The win moved the 4-1 Pirates to the second round of the Division III, Region 10 playoffs, where they will meet Padua this Friday in Parma.

“We started slow, and then we got it in gear,” coach Josh Wells said. “It's game five for us.”

The Minutemen held a 7-5 halftime lead before the Pirates came back for 24 second-half points.

“It's always tough to play on a day off,” Wells said of his team that did not have school. “We are just taking it week by week.

“Lexington is a tough team. They came up here on a long bus ride, and they were physical.”

In the second half, Rocky River dominated the game. Linemen Wes Yeun, Charlie Sobol, Aiden Andrako, Aiden Coyne and Joe Riedl began blasting holes for quarterback Braedon Spies and running back Johnny Bebie. In those final 24 minutes, Spies rushed for a pair of touchdowns while gaining 64 yards, while Bebie, who had been neutralized in the first half, gained 70 yards and a touchdown.

“The line opened some holes,” Bebie said. “They started to control the line. This was the first big game I've played in, and it started out tough.”

The Pirates took the lead for good on the opening drive of the second half, moving 50 yards on six plays with Spies breaking a pair of tackles for an 8-yard score.

On the extra point, Spies scored on a run to improve the score to 13-7 with 8:45 left in the third quarter. The Pirates, who used the same formation a week before against Lakewood, put the line on the left side of the field, the center with a receiver's number in the middle, and the rest of the team off the line on the right side. After taking the snap, the junior signal caller powered his way in.

“We like to run that,” Spies said. “They must have seen film of that. We have our center with a receiver's number, and he was covered. I just had to get by one guy.”

Meanwhile, the Pirate defense turned up the intensity. Patrick Lange ended the next Minuteman drive by recovering a fumble two plays after Spies' score.

For the contest, the Minute had just 65 yards rushing, including a 48-yard run for their only score. They added just 30 yards passing. Also, Rocky River created three turnovers on an interception and two fumble recoveries.

With 6:21 left in the third quarter, a 34-yard field goal by Mack Massad boosted the Rocky River advantage to 16-7.

And again, the defense struck, as Charlie Hudson intercepted a Lexington pass. However, the Pirates weren't able to take advantage of the theft.

The Pirates iced the game with a 58-yard, six-play drive that was capped when Bebie weaved his way through the Minutemen defense for a 20-yard scoring run. Massad's extra point built the lead to 23-7 with 6:27 left.

Again, the Pirate defense stopped the visitors with a turnover when Jake Gura recovered the on-side kick at the Lexington 17. Four plays later, Spies blasted in on the right side for the final 29-7 margin.

Although the Pirates won by 22 points, the first half was a different story as Lexington held a 7-5 halftime edge.

The Minutemen shocked the Pirates when Jordan Beireia scored on the 48-yard run with 6:19 left in the opening quarter for a quick 7-0 lead.

But that seem to awaken the home team's defense. With Matt George, Yuen and others taking control, the defense set up Rocky River's first score. With 11:50 left in the half and seeing Lexington punting from its 2, Sam Fuchs broke through and cleanly blocked the punt.

“I saw a gap between the two personal protectors,” said the senior. “It all happened so quick.”

The ball rolled out of the back of the end zone for a safety, cutting the Lexington advantage to 7-2.

The final first-half points came with 3:26 left in the half when Massad kicked a 26-yard field goal.

Rocky River next faces 5-1 Padua, which had the night off. The two teams have a common opponent in Lakewood, which Padua defeated 41-7 and Rocky River won 31-0. Both games were in Lakewood.

Friday's game with Padua starts at 7 p.m. at Parma Stadium.