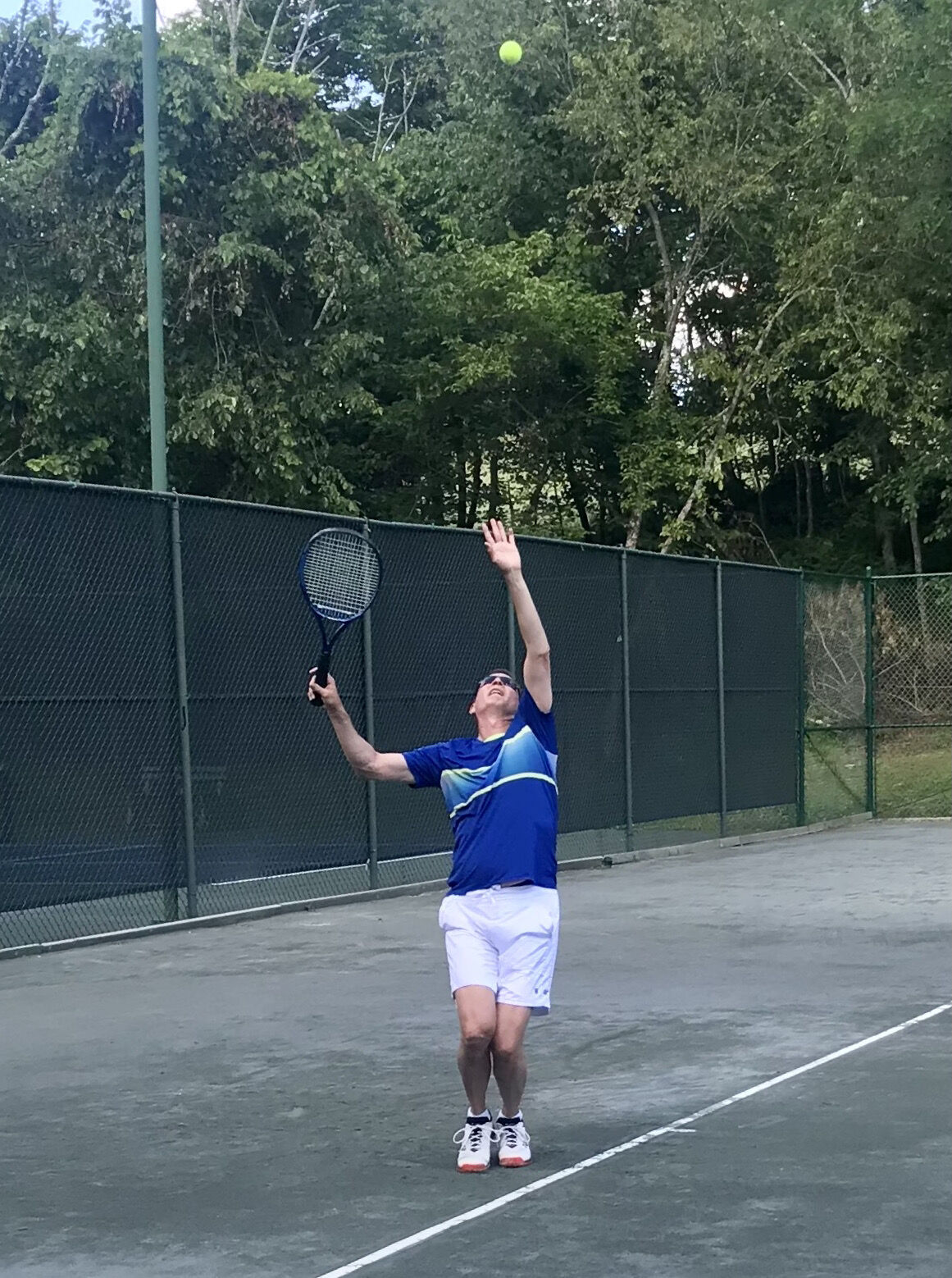 Rocky River boys and girls varsity tennis coach Eric Hillstrom hadn’t played competitive singles tennis much in the past decade due to a string of injuries, but found himself back on the court on June 24, playing in the Jack Dorsey Memorial Senior Open at Oglebay Resort in Wheeling, WV. He was one of 14 Ohioans registered to play in the United States Tennis Association-sanctioned tournament. He ultimately fell in the first round to Cleveland native and No. 4 seed Mark Florman. 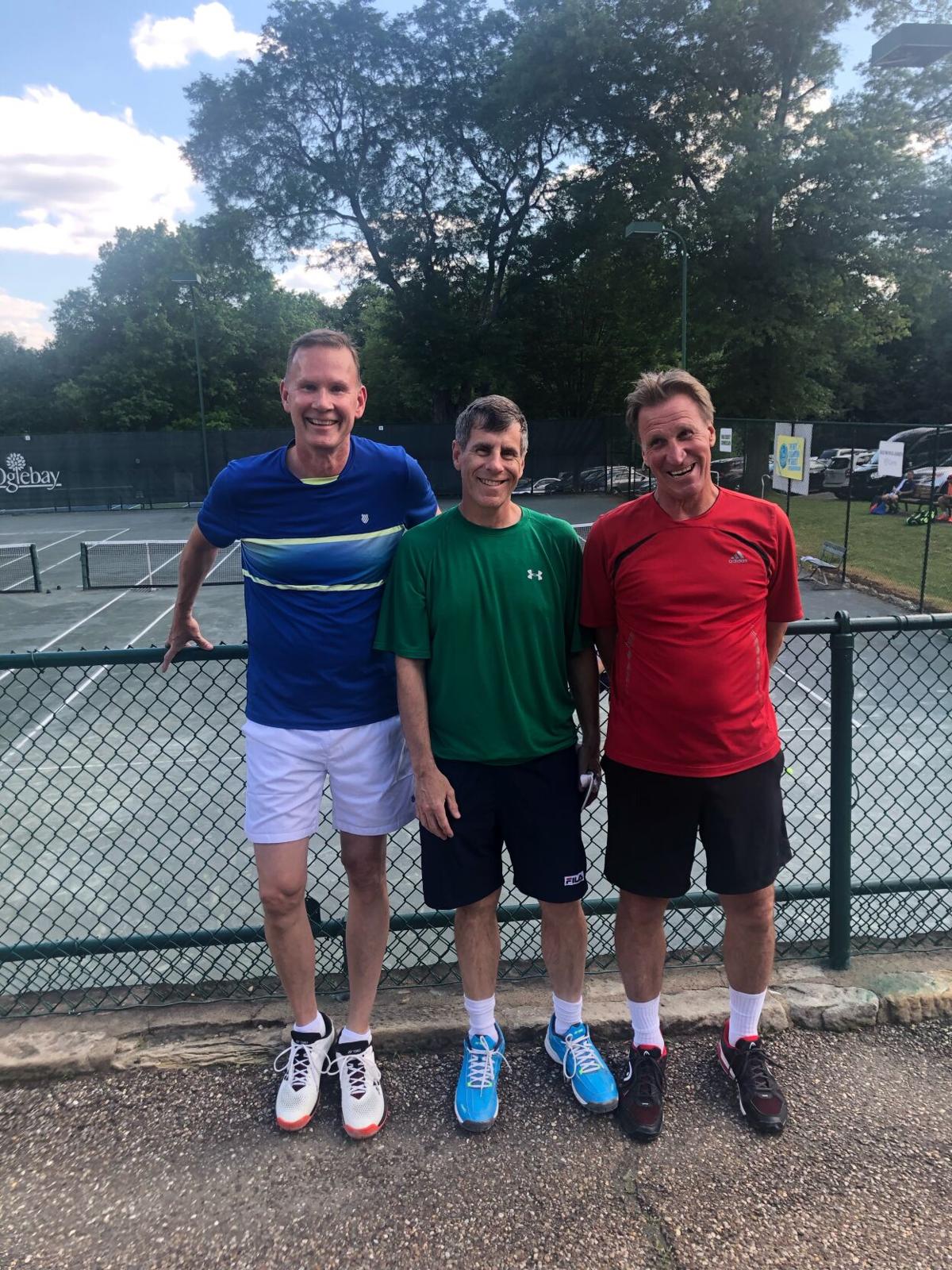 Rocky River boys and girls varsity tennis coach Eric Hillstrom hadn’t played competitive singles tennis much in the past decade due to a string of injuries, but found himself back on the court on June 24, playing in the Jack Dorsey Memorial Senior Open at Oglebay Resort in Wheeling, WV. He was one of 14 Ohioans registered to play in the United States Tennis Association-sanctioned tournament. He ultimately fell in the first round to Cleveland native and No. 4 seed Mark Florman.

Physical discomfort has been part of Eric Hillstrom’s life for most of the past decade. As a result, the ability to play competitive tennis was not a realistic idea.

That’s why picking up a racket again this year has meant so much to the 57-year-old Westlake resident, who competed in the annual Jack Dorsey Memorial Senior Open at Oglebay Resort in Wheeling, WV last weekend.

Held from June 24-27 at the Horne Family Tennis Center and sponsored by the United States Tennis Association, the event fielded players from across the country in 19 different age groups for singles and doubles play. Hillstrom, who will enter his first season as the Rocky River girls tennis coach in the upcoming school year, competed in the 55 & Over bracket.

“I don’t have expectations of myself at this, but I wanted to see where I’m at, physically,” Hillstrom said.

It was his second tournament this year, and only his second as a singles competitor in almost 10 years. Wear and tear led to breakdowns in his body, requiring two back surgeries, an ankle surgery and a complete hip replacement between 2014 - 2018.

In February, he dipped his toe back into competitive waters by partnering with Tim Krenn to play doubles in the USTA’s Midwest Sectional tournament at Chagrin Valley Tennis Club. They wound up finishing second, and Hillstrom came away feeling up to the task of resuming a playing schedule.

“A lot of the teaching pros who’ve known me all these years said I really shouldn’t be too hard on myself because I’ve come a long way,” Hillstrom said. Last year I started playing four times a week and training really hard. This would be my second singles tournament in over a decade.”

Tennis has been Hillstrom’s passion since age 10, when his parents took him to a local club to watch legend Martina Navratilova play. Her skill with a racket convinced young Eric that he needed to give the sport a try, and he’s been at it ever since.

“I watched her do these trick shots and, for some crazy reason, that looked cool and fun to me,” he said. “That’s when I first picked up a racket.”

He started playing competitively at 14 when he attended the Rainey Tennis School at Ohio Wesleyan University in Delaware for two weeks, then went on to play first singles for Painesville Riverside High School. He spent one year as a member of the Bowling Green State University men’s team but didn’t get much playing time and eventually left that program.

After graduating from BGSU, he earned an MBA in business administration, management and operations from Case Western Reserve University.

When it came to the court, he found he was a late bloomer.

“I became a much better player as I got older,” Hillstrom said. “I wasn’t as good in college as I was when I was 35. I just took to it better later, and with tennis being such a mental game I think I just was a hothead as a teenager and broke a lot of rackets. Once I got that under control, I started playing much better.”

At Oglebay, he was part of his division’s 17-man bracket. He played his opening round match on Thursday against Cleveland resident Mark Florman, who’d garnered the No. 4 seed.

The Jack Dorsey Memorial is designated by the USTA as a Category 3 tournament. By comparison, events in Categories 1 and 2 are usually played by those who are considered at or near professional-caliber. USTA members were able to enter the tournament for a $72 fee. There was no prize money involved, but winners did receive a trophy.

Age brackets started at 35 & Over and went all the way up to 85 & Over for singles and doubles, with 14 Ohioans registered. Hillstrom was the only Westshore resident to participate.

At Rocky River High, he’s already begun putting his playing experience to use while working with high school players. He completed his first season as the assistant boys coach this spring, helping the Pirates to a third place finish in the Great Lakes Conference. He will take over as the head coach next spring.

Starting in August, he’ll oversee a Pirate girls team that has won five of the past six GLC titles and advanced first single Samantha Robertson to the Division I district tournament.

As a first-time high school coach, Hillstrom has found his place talking the talk. In Wheeling, he was finally able to walk the walk.