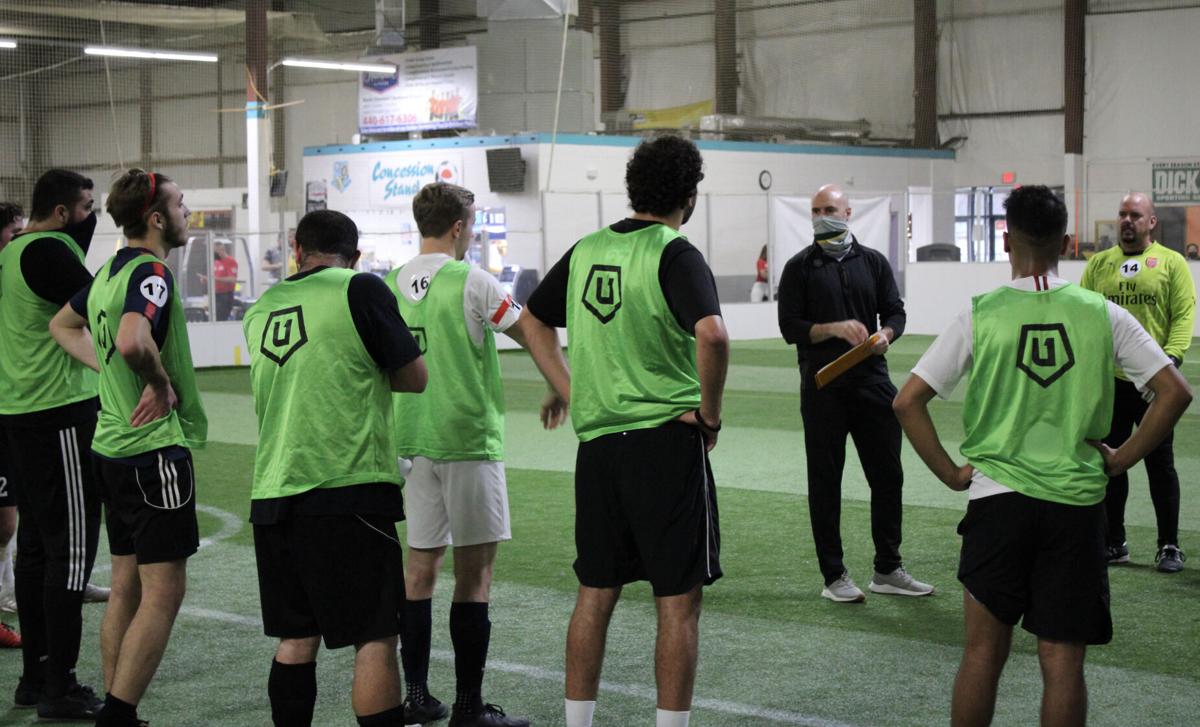 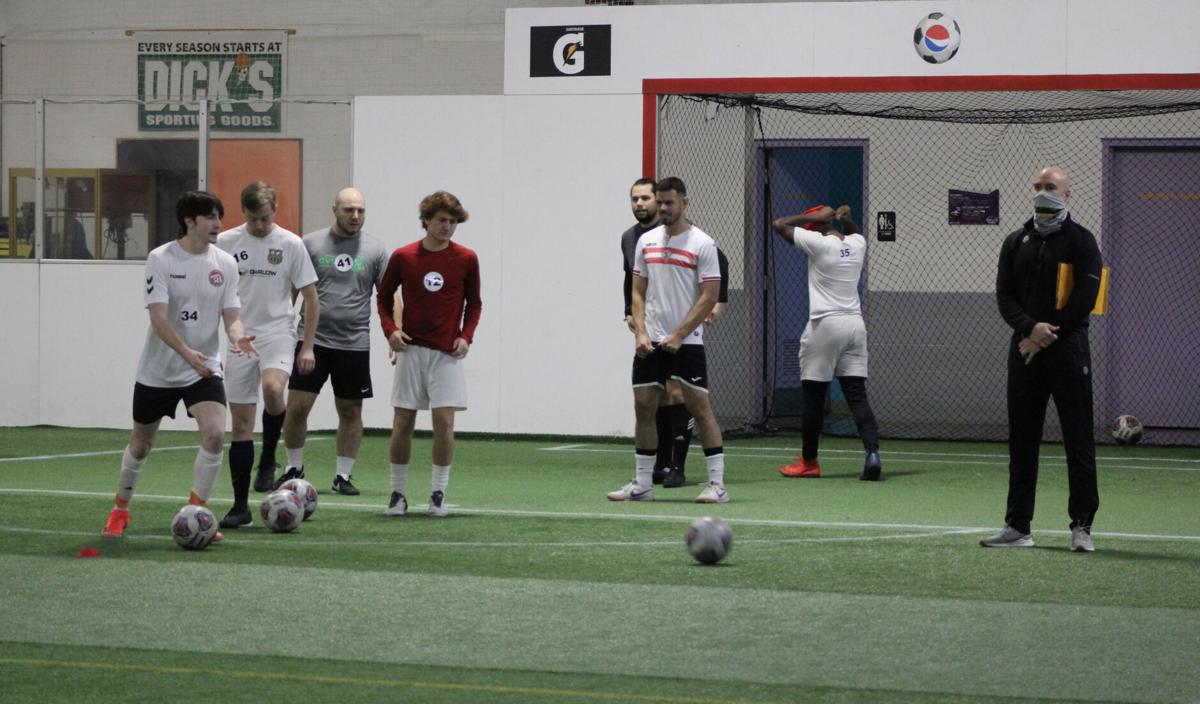 Athletes at the Cleveland Crunch’s open tryouts Dec. 12 started off working through drills, then were broken up into four different teams for a round of scrimmages. There were 44 athletes present at the tryout, which took place over two days between the hours of 12-2 p.m. 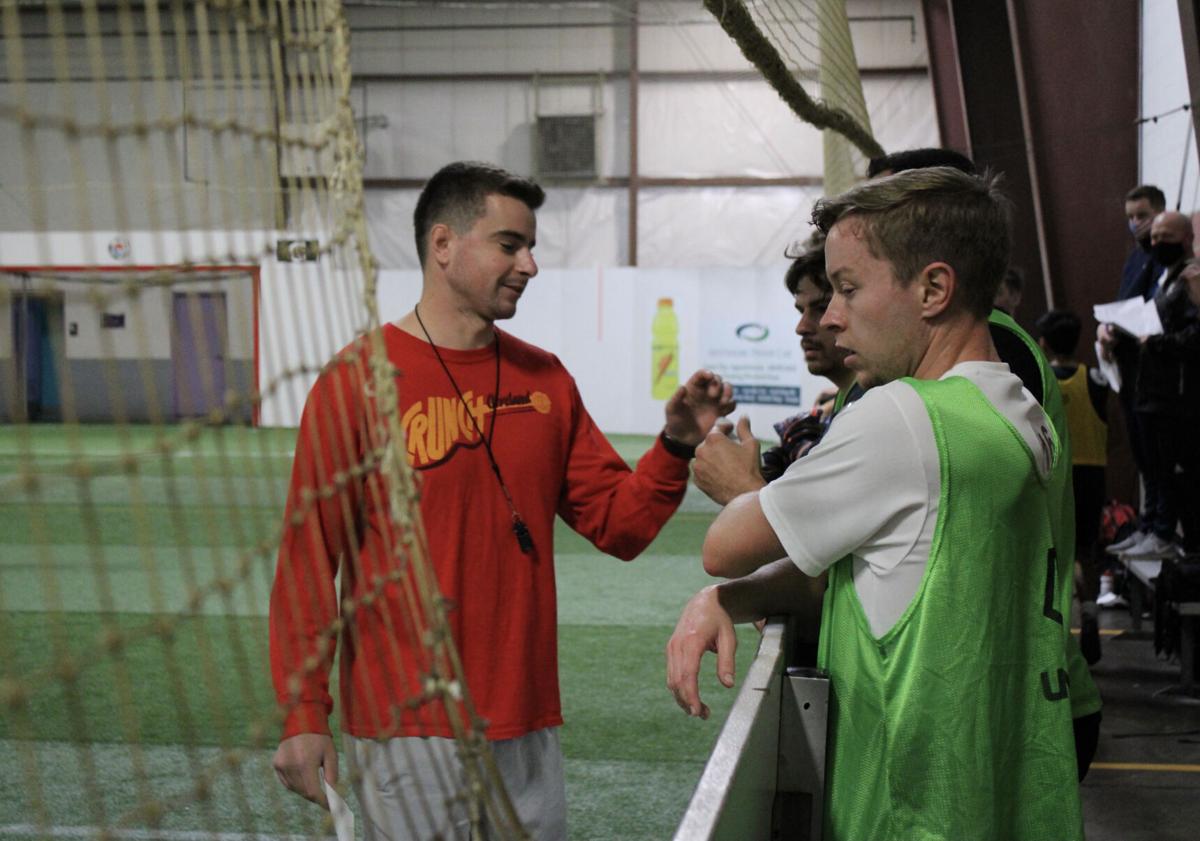 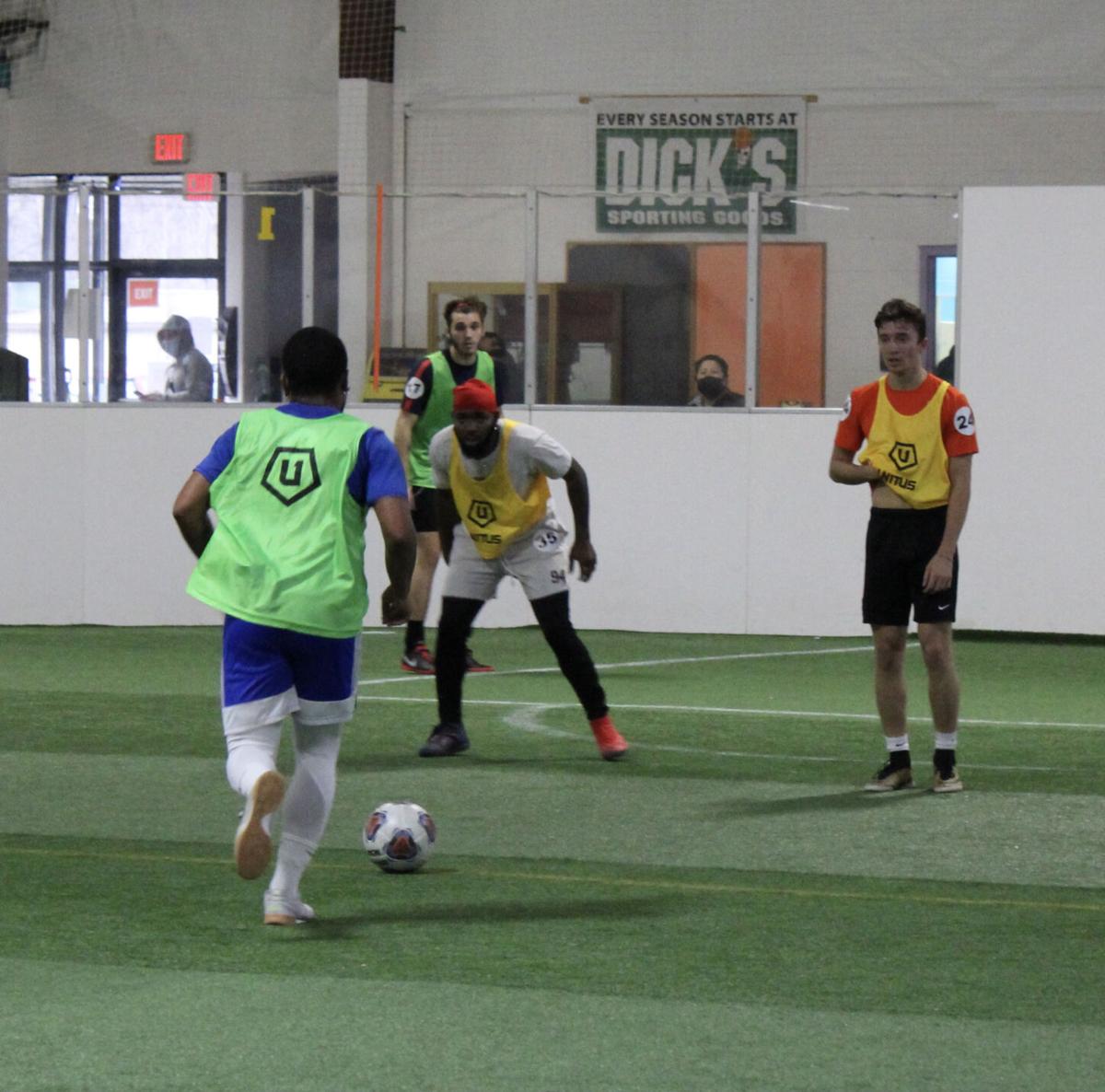 The Cleveland Crunch roster already has five players signed to it, but will likely determine the majority of its spots through open tryouts for prospective players age 17 and up. The first round of tryouts were held Dec. 12-13, with another event expected sometime in the spring.

Athletes at the Cleveland Crunch’s open tryouts Dec. 12 started off working through drills, then were broken up into four different teams for a round of scrimmages. There were 44 athletes present at the tryout, which took place over two days between the hours of 12-2 p.m.

The Cleveland Crunch roster already has five players signed to it, but will likely determine the majority of its spots through open tryouts for prospective players age 17 and up. The first round of tryouts were held Dec. 12-13, with another event expected sometime in the spring.

In the middle of a crowd of assembled hopefuls at the North Olmsted Soccer Sportsplex on Dec. 12 was Tony Dore’, leading drills and setting up scrimmages on the turf.

Dore’, the current varsity soccer coach at St. Edward and a decorated player in his own right dating back to his time at Lorain Catholic High School in the early 1990s, was serving as the steward for a new crop of athletes vying for open roster spots on a professional team near and dear to his heart–the Cleveland Crunch.

The indoor franchise, which played its last game under that moniker in 2001, was revived earlier this year by a pair of Mentor natives and diehard Crunch fans and will enter the Major Arena Soccer League (MASL) prior to the start of its next season in November 2021. The team already has several players signed, but held a two-day tyout Dec. 12-13 that drew 44 interested prospects of varying ages from all over Ohio and several other states.

“I just felt like it was the right thing to do, to offer some services and to help out” said Dore’, who played for the Crunch during the 1997 and ‘98 seasons. “I just want to see success for this franchise and (help) get it back up and running and mirror what it was like in the past.”

The team expects to hold another tryout in the spring, ahead of playing its first games against outside competition at the M2 Great Lakes Arena Invitational at Mercy Health Arena in Muskegon, Mich., on April 3. The hope was to identify about 12 players in December that would get an extended look once springtime arrives. Once formed, the final roster will consist of 15-20 players.

As the organization tries to navigate a sports landscape affected by COVID-19 and continues to work on securing a home venue in downtown Cleveland, it will continue to both practice and play at the Soccer Sportsplex, located at 31515 Lorain Road.

Westlake-based sports uniform company, Un1tus, is overseeing the creation and rollout of Crunch merchandise and uniforms. Dore’, who owns Un1tus, has been serving in an interim coaching role until the full-time staff is hired.

“I’m just in a volunteer role from a couple of different levels,” he said. “I’m kind of like an advisor, also working with the on-field portion, until the (owners) can figure out who the coach is going to be.”

Fans in Northeast Ohio may remember the Crunch of the old National Professional Soccer League (NPSL), which became a dynasty of sorts in the mid-to-late 1990s, winning three championships in a five-year span. In 1994, their dramatic 17-15 double-overtime victory over the St. Louis Ambush netted Cleveland’s first professional sports title since the Browns in 1964.

With scoring machines and fan-favorites Hector Marinaro and Zoran Karic breaking league records up front and standout goalie Otto Orf, the team attracted sizable crowds during that stretch while playing at the Cleveland State Convocation Center, now known as The Wolstein Center. The team drew a league record 12,726 fans for its title-clincher over the Ambush in 1999.

It moved to a new league, Major Indoor Soccer League II, prior to the start of the 2001-02 season, and a new ownership group rebranded it as the Cleveland Force, which remained until it folded in 2005.

The new iteration’s management, led by president and majority owner Eric Davis and vice president Luciano Ruscitto, are leaning on that 1990s nostalgia, as well as a strong local soccer following, to try and make the Crunch a part of the city’s sports fabric again.

“We plan to replicate that old experience at games (post-COVID), that constant fan engagement” Ruscitto said. “We want to have every stoppage in play, every timeout, end of quarter, halftime, to have some kind of fan engagement activity, mostly geared toward kids, and create that family atmosphere. The biggest thing when I was little, I remember, they could’ve lost 20-0, but I walked out with an autographed picture of a player, so I don’t care. I want to create that family-friendly, welcome environment. It’s a fan’s league. It wouldn’t work without fans.”

The revival of the Crunch started when Davis, who graduated from Lake Erie College with a degree in Business Administration and Marketing, discovered that the Crunch trademark had been ruled “dead” since 2001. He changed an existing LLC he owned from another job to the Cleveland Crunch, LLC, and teamed with Ruscitto to purchase the trademark and begin building the brand’s identity.

The pair has spent more than a year picking the brains of other owners in the MASL, learning on the fly how to run a professional team. They hired a small front office staff consisting mostly of friends, and started developing relationships with former Crunch players like Dore’ and Marinaro, who is the men’s head soccer coach at Carroll. Outside of the former players serving as talent evaluators and advisors, no member of the Crunch organization is over the age of 30.

“The experience has been crazy. It didn’t seem real at first,” said Ruscitto, who teaches and coaches soccer at Mentor High School and is now helping run a professional soccer team. “Otto Orf was my idol when I was little. I have pictures with him (taken at games), and I loved watching him at games. And now, on a week by week basis, I’m standing next to him and we’re business partners now...Watching the Crunch when I was little was great, but now I can’t wait to provide those experiences that I had to kids nowadays.”

First came the team’s formation, then its branding. The team’s new logo, which borrows from the old color scheme, depicts the Cleveland skyline with a guitar neck and a soccer ball in the middle. The Crunch also has a social media presence and can be found at www.@CRUNCHTime_CLE on Twitter, @clecrunch on Facebook and @clevelandcrunch on Instagram. It’s home website is www.theclevelandcrunch.com.

Dore’ declined to describe what the uniforms would look like, but said they will feature callbacks to the kits of old, much like the logo. Whether the team itself will provide a callback to successful seasons of old and reestablish its footprint in the region will be up to all involved.

“I think the team has kind of been missing (from the local landscape),” Dore’ said. “For a long time, the Crunch, that was kind of the glue for the community from a soccer standpoint. I think it was one thing that anyone who was a soccer person had pride in and enjoyed watching. The Crunch and the Force have been around for so long that they’re a part of the city’s DNA, so to not have them around, I’d say it’s been missing. Our hope is that the city can embrace it again.”