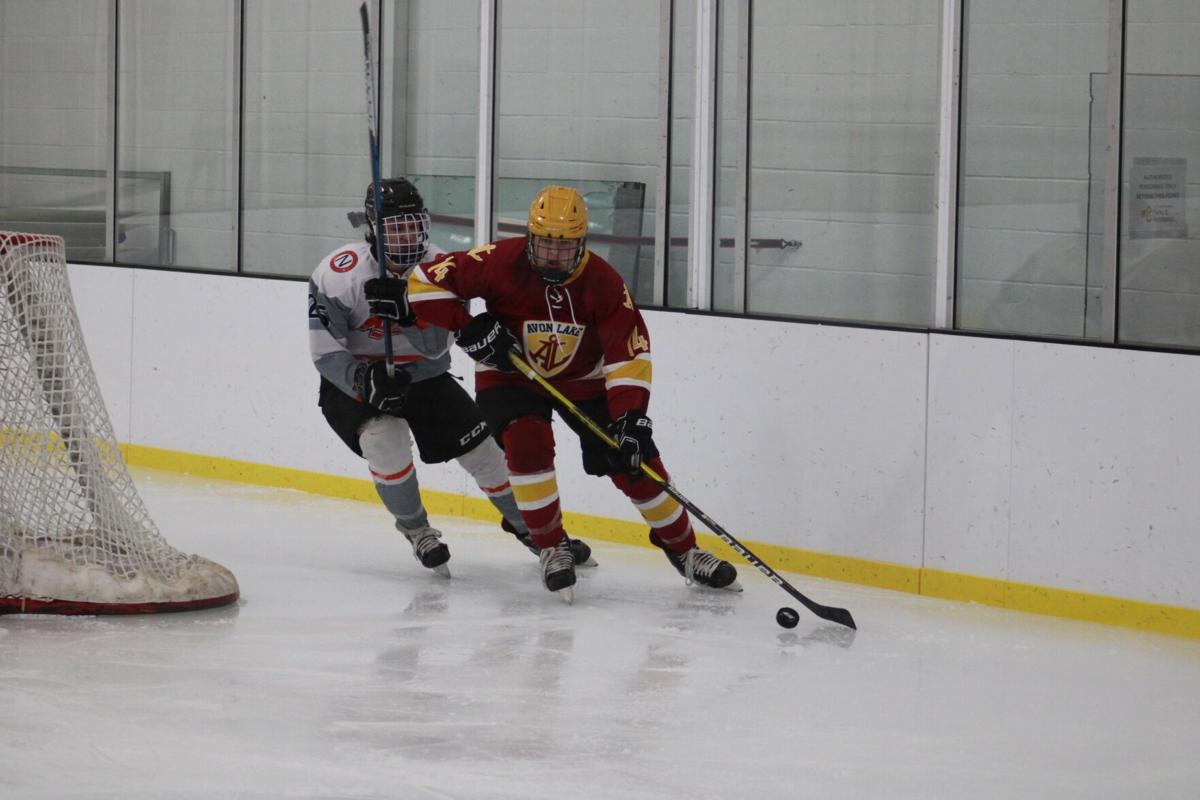 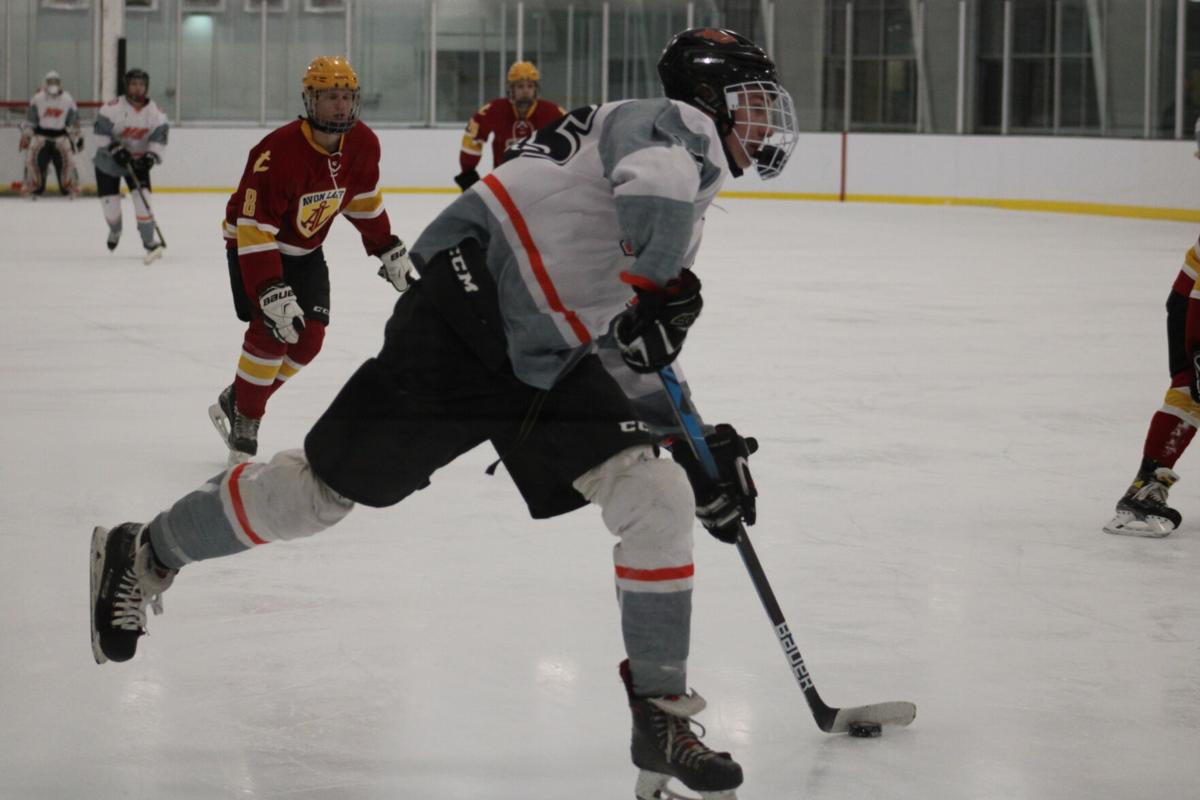 This wrister by North Olmsted forward Justin Christ during the second period found the back of the net, helping the Eagles build a four-goal lead at the time. Christ finished with two goals and two assists. 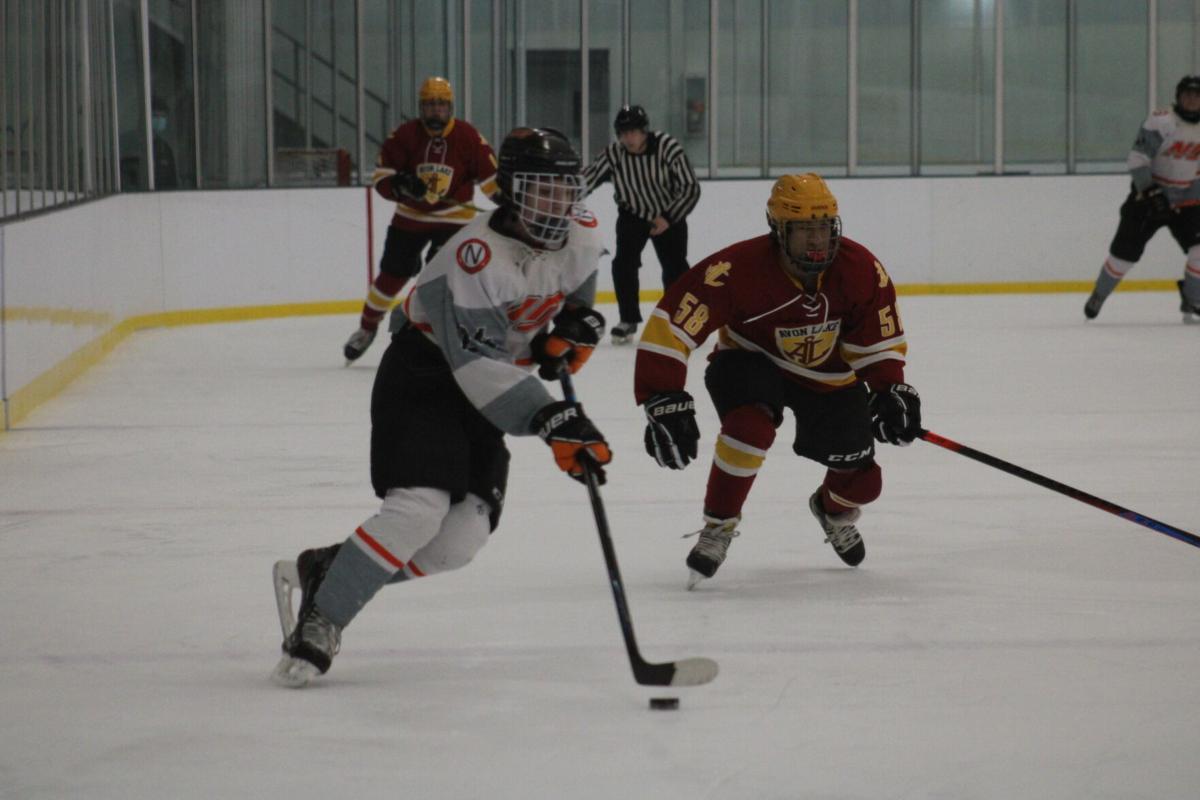 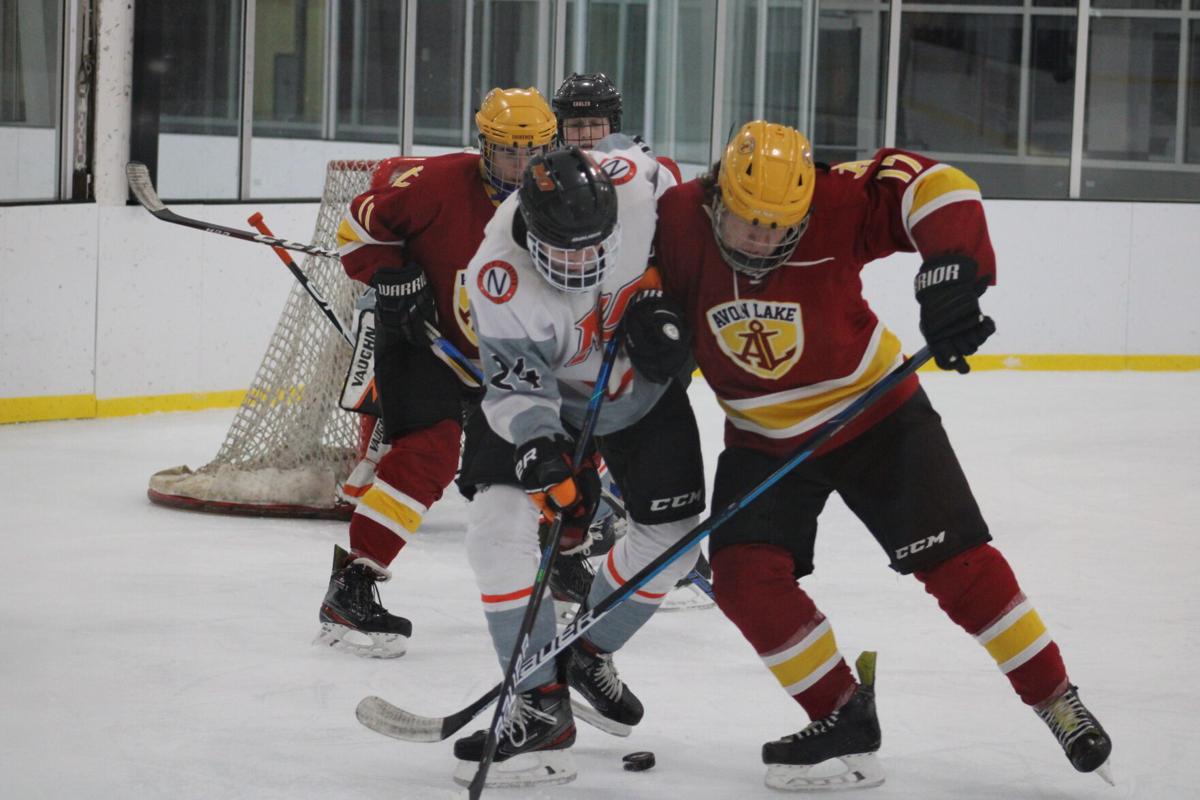 The Shoremen had to overcome a 6-2 deficit in the third period to eventually win in overtime, 8-7. It was their second win over the Eagles this season. 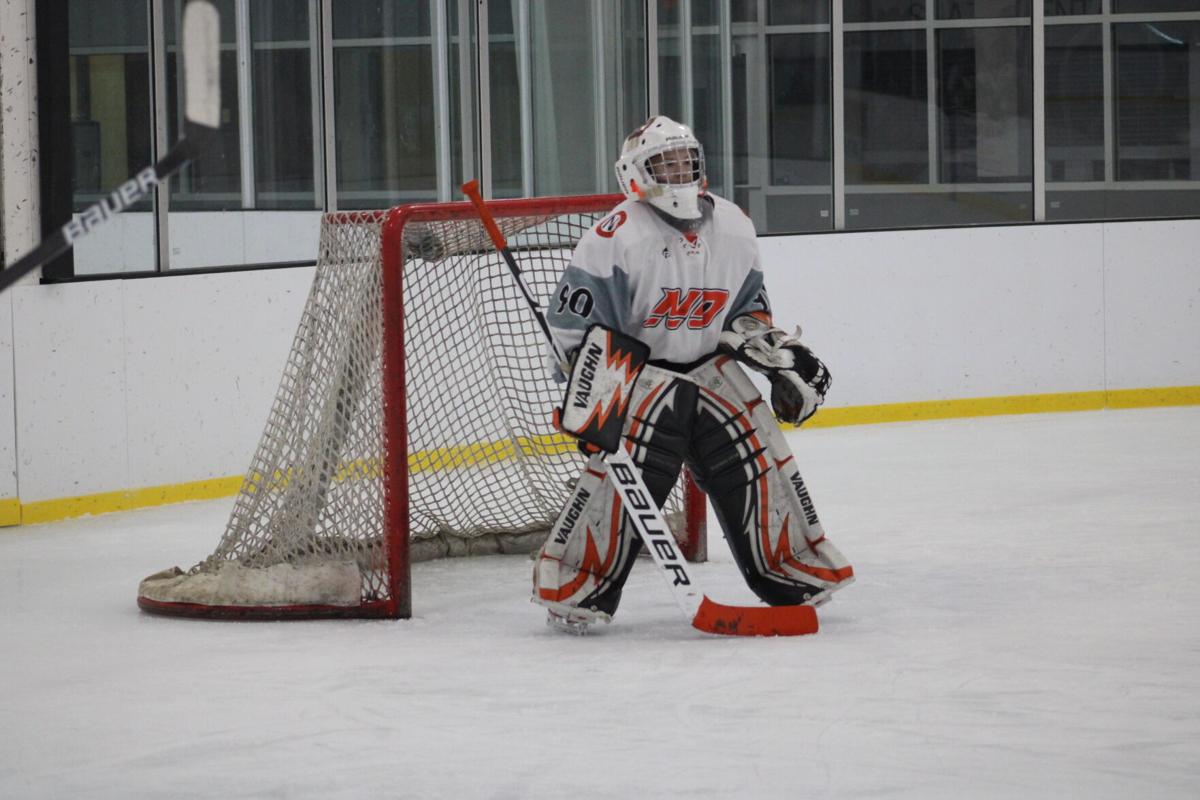 This wrister by North Olmsted forward Justin Christ during the second period found the back of the net, helping the Eagles build a four-goal lead at the time. Christ finished with two goals and two assists.

The Shoremen had to overcome a 6-2 deficit in the third period to eventually win in overtime, 8-7. It was their second win over the Eagles this season.

A four-goal deficit at the start of the third period didn’t deflate the Avon Lake hockey team.

Instead, it dug in. And the ensuing 15 minutes became a showcase for its ability to score in a hurry on suddenly-reeling North Olmsted.

Down 6-2, the Shoremen rallied with five goals in the first six minutes of the third to briefly take a 7-6 lead, which the Eagles soon tied. Barely three minutes into overtime, Ryan Harbor whipped a shot past Eagles goalie Donovan Sergi to lift the Shoremen to an 8-7 victory at the North Olmsted Recreation Center rink.

They won by getting the puck deep into the Eagles’ zone and maintaining possession. Harbor snuck out toward the middle of the ice in front of the net, and Luke Farthing found him with a pass through traffic. Harbor’s shot banked slightly off of Sergi’s stick and in to send everyone home.

“We came out flat and (North Olmsted took advantage of us,” Shoremen coach Wade Nilson said. “Every time they’d shoot the puck they’d capitalize. They’re a very well-coached team...We were just fortunate to regroup in the third period and put a few into the net.”

The Shoremen (3-3-1, 2-1-1 Greater Cleveland High School Hockey League White North) only needed 21 seconds to score their first goal of the third period off the stick of top-line center Konner Nilson. Harbor and Brady Starck scored within 32 seconds of each other to make it 6-5 with 10:06 to play, then Konner struck again with 9:11 left to tie it.

Fatigue was setting in for the Eagles (1-8, 0-4 GCHSHL White North), who struggled to clear the puck out of their own zone for most of the evening, and had their big advantage wiped away in quick fashion. Kevin Graney gave the Shoremen a 7-6 lead with 7:35 remaining.

“We all had the thought process that we had to get everyone riled up (heading into the third),” Konner Nilson said. “At intermission, Coach comes in and gets everybody fired up to go out and play how we normally play. There was no doubt we were going to get back into it.”

The Eagles were able to regroup just enough to force overtime. Junior winger Ryan Bonham scored his fourth goal of the night to tie the game 7-7 with 6:25 left, and despite the Shoremen gaining a power play advantage in the last minute of the third, the teams needed extra time.

North Olmsted successfully killed the penalty over the first 1:22 of overtime, but the inability to clear the puck cost them when Farthing, a senior defenseman, set up Konner Nilson’s deciding goal.

“It was a great pass by Luke,” Konner Nilson said. “He played one hell of a game. He found me with a great pass, right through everyone.”

Konner Nilson finished with a hat trick, while Harbor scored twice. Six different Shoremen were credited with at least one assist, led by three from Graney. Austin Spishak made 5 saves in the game, but was pulled for A.J. Jagels in the third, who went on to make 13 saves the rest of the way.

Though fatigue started to set in in the latter stages of the game, the Eagles put together an impressive second period, capitalizing on moments when the Shoremen couldn’t control the puck. Up 2-1 to start, the Eagles received three unanswered goals–two from Bonham and one from Justin Christ–to take a 5-1 lead. After Konner Nilson made it 5-2 with 7:02 left, Andrew Hancovsky scored 25 seconds later to push the lead back to four, 6-2.

Matt Tomaselli briefly put the Shoremen ahead, 1-0, with an early first period goal. Bonham tied it with 11:06 left, and Christ gave the Eagles a 2-1 lead with 7:14 remaining.

“We had a good amount of confidence after the first,” Eagles coach Ben Palacko said. “(Avon Lake) mercy-ruled us (10-0) the last time we played, and I think once we realized we were in the game and took a lead into the locker room, confidence goes a long way with a high school team. We got some nice scoring plays set up by our top guys and we were feeling good in the second.”

“(Avon Lake) kept coming at us. Give them credit, they did a great job,” Palacko said. “Our guys were just gassed. We have a fairly short bench and we have some freshmen that we’re working in out there, and we kind of survived a little bit in the second. They came alive and we just didn’t have enough to match it in the third.”

North Olmsted will next face Avon at 7:45 p.m. Friday at the North Olmsted rink. Avon Lake’s next listed game is set for 8:15 p.m. on Feb. 2 against Parma at Rocky River’s Hamilton Ice Arena.