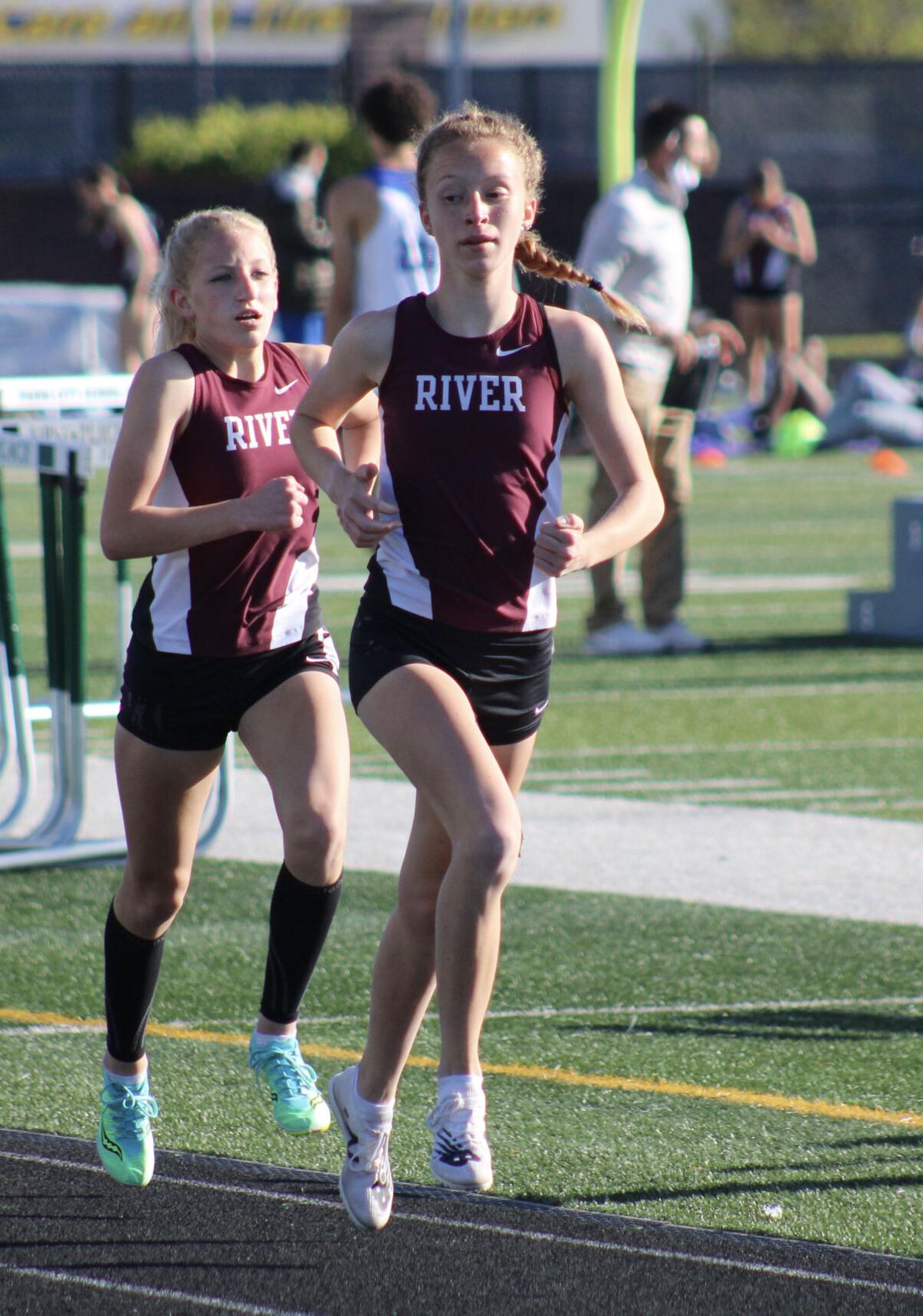 Rocky River junior Sam Coleman placed eighth in the 1,600-meter run at the Division I state track and field meet at Hilliard Darby High School in Columbus on June 5. She was one of three Pirates distance runners competing. 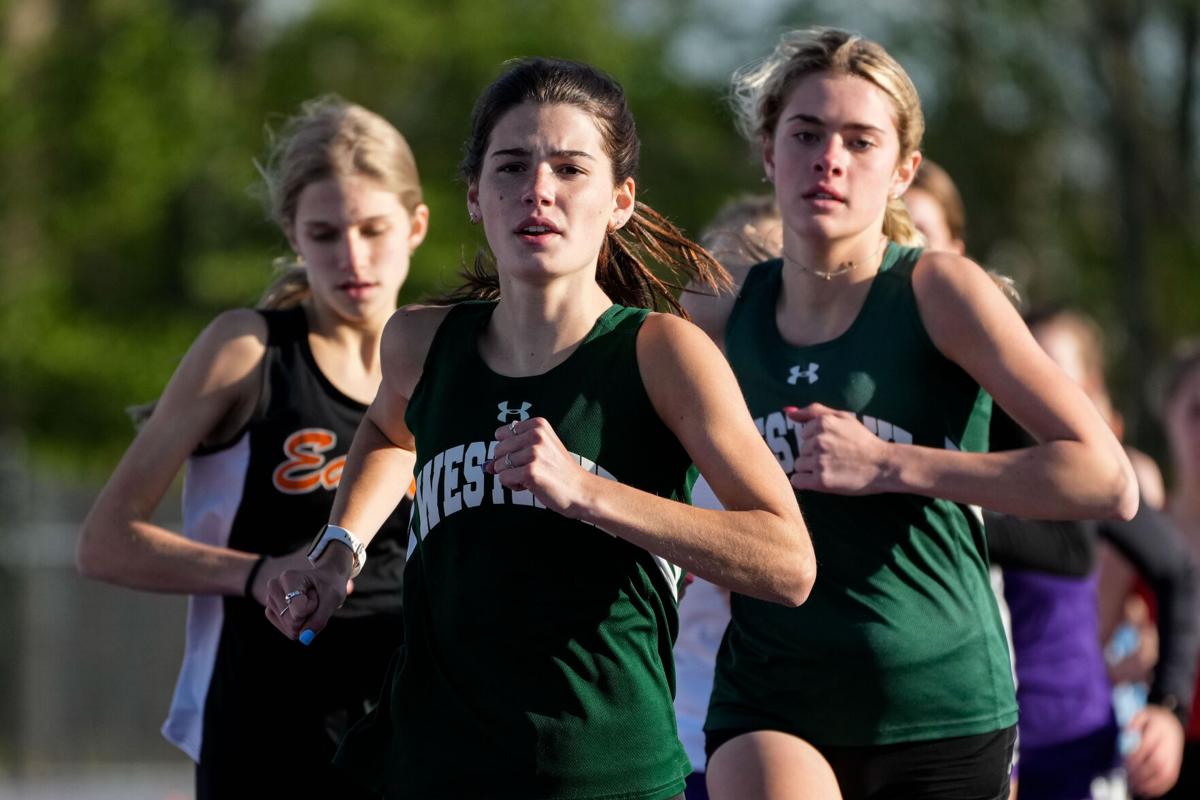 Westlake freshman Sarah Peer became the first member of the Demon girls team to qualify for state in a track event since 1993, and the first to qualify in the 800-meter run since 1988.

Rocky River junior Sam Coleman placed eighth in the 1,600-meter run at the Division I state track and field meet at Hilliard Darby High School in Columbus on June 5. She was one of three Pirates distance runners competing.

Westlake freshman Sarah Peer became the first member of the Demon girls team to qualify for state in a track event since 1993, and the first to qualify in the 800-meter run since 1988.

A distance race at any high school track and field meet doubles as a lesson in what pain absorption truly looks like.

Distance events, such as the 800-meter run, the 1,600 and the 3,200, can be tiring just to watch. And the athletes running those many laps around the track have to be finely-tuned – not to mention determined – to be successful.

On the outside looking in, it would seem like most other events would be the more desirable choice for a high schooler over all of those miles logged in a single afternoon, in all sorts of weather. But for those that do it, and especially for those who took part in the Division I state meet on June 4-5 at Hilliard Darby High School in Columbus, it’s a labor of love they couldn’t live without.

“I think distance races really show the grit in people,” Avon senior Jett Wieber said. “Don’t get me wrong, in any event, whether it’s field or sprints, they’re all tough and they’ve all got their own challenges. But in distance you’re out there with your thoughts, and you don’t really have time to doubt yourself. Out there, your body’s going to tell you I don’t want to do this, but you’ve got to make a decision – am I going to go or am I going to give in. And this tests a person’s discipline and who wants it the most is going to get it.”

During his track career, the distance ace has been a case study in pain and gain. His sophomore season in 2019 was marred by a stress fracture in his left tibia, patella tendonitis and hip issues. Then he lost his junior season to the COVID-19 pandemic, along with the rest of the state’s track and field athletes.

In his final spring in an Eagles uniform, the John Carroll University commit authored a history-making season in which he broke school, county and various meet records. He now owns the Eagles record in both the 1,600 (4:16.42) and 800 (1:55.21), which also stand as Lorain County records.

A distance runner since the seventh grade, Wieber immediately took to the sport and hasn’t looked back, continually working to win the battle against his own brain while on the track.

“As an individual, to know that I overcame those (injuries), but also for my team, for my family, to just go out there and prove that I’m more than my past and my injuries and shortcomings, that I have the strength to come back stronger, for me it’s a life lesson,” he said.

Rocky River junior Sam Coleman fell in love with the daily challenge of running long distances, and has fashioned a memorable cross country and track career by pushing her own limits.

Coleman’s march to her first state meet, where she finished eighth in the 1,600 (5:05.42) on June 5, started gaining steam as the regular season ended. She walked into the Great Lakes Conference meet in Parma on May 13 and walked out with championships in the 800, 1,600 and 3,200. Two of those races were run 15 minutes apart.

She stuck to the mile in the postseason, finishing second at a district meet in Amherst, then returning to the same track a week later to place third and qualify for state.

“You have to keep yourself mentally strong in the middle (of each race),” Coleman said. “The third lap in the mile is always the worst, and it’s the same in the fifth and sixth laps in the two-mile. I feel like the 800 is mostly just trying not to die the whole time. It’s a mental thing.”

“You feel such a sense of accomplishment because there’s so much training that goes into it,” she said. “There’s base mileage over the winter, doing workouts, injury prevention. I feel like I get a greater sense of satisfaction running a mile than I would running the 100, or something like that. It’s definitely very difficult sometimes.”

Unlike Wieber or Coleman, Westlake freshman Sarah Peer had no interest in running whatsoever, let alone distance races where many of the athletes can be found slumped over or lying on the infield grass, gasping for air after crossing the finish line.

She was a soccer and volleyball player, and didn’t attempt a track event until being nudged into it by Lee Burneson Middle School coach Dennis Sullivan. Now, she can’t imagine life without the sport.

“He said ‘you’re a great runner. You’ve got to run’. And so I started running cross country and noticed I had a talent for it”, said Peer, who competed in the 800 at state and finished ninth (2:16.28) on June 5. “Running is such a tough sport in general, and if you start trying out sprints, you may not be great at it, especially if you don’t have the extra muscle or the long legs, you might find that you’re better at distance. It’s the endurance, the heart, the effort.”

Peer, who joined her cross country teammates in qualifying for state back in the fall, was a part of a Demons girls track team that turned heads all spring on the way to a Southwestern Conference championship, the program’s first since 2007.

By qualifying for state at the Division I regional meet at Amherst on May 27, Peer became the first female Demon track athlete to reach Columbus in any race since Lisa Grey in 1993, and the first overall since Kalpana Beach advanced in the high jump in 2010.

She’s the first 800 runner to qualify for the state meet since Catherine Ponstingle in 1988, and is one of only three cross country and track athletes in school history to reach the state meet in both sports in the same season, along with Ponstingle (1987-88) and Stacy Foley (1985-86).

“It’s very exciting,” she said of the special season. “We haven’t had a team like this, probably, in Westlake High School history, that’s won for cross country, won for track and that’s made it so far. It’s surrounding yourself with all of these amazing other girls and athletes. It keeps pushing me farther and farther. Our coaches push us, too, every day to get us to be the best athletes possible.”