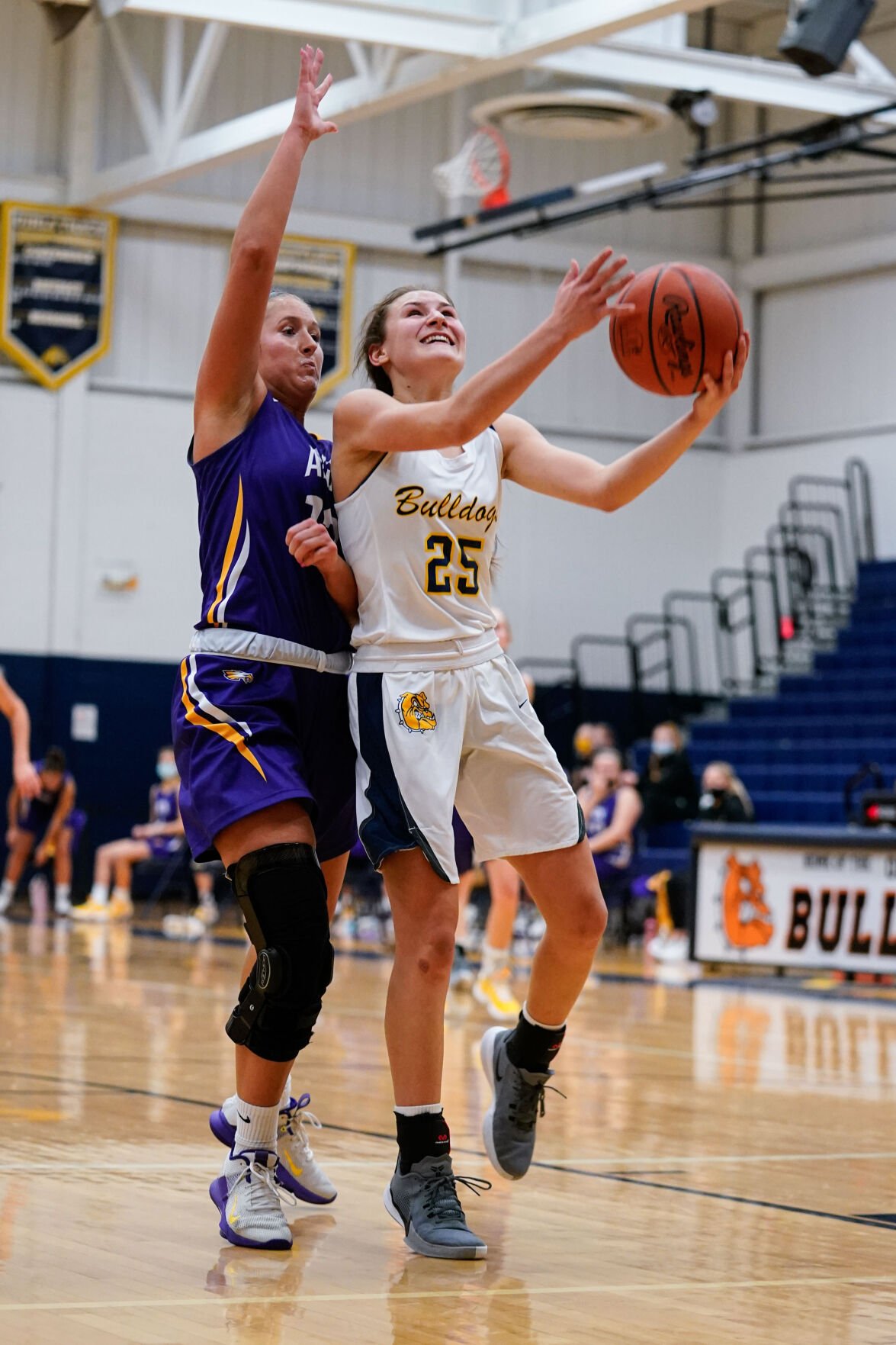 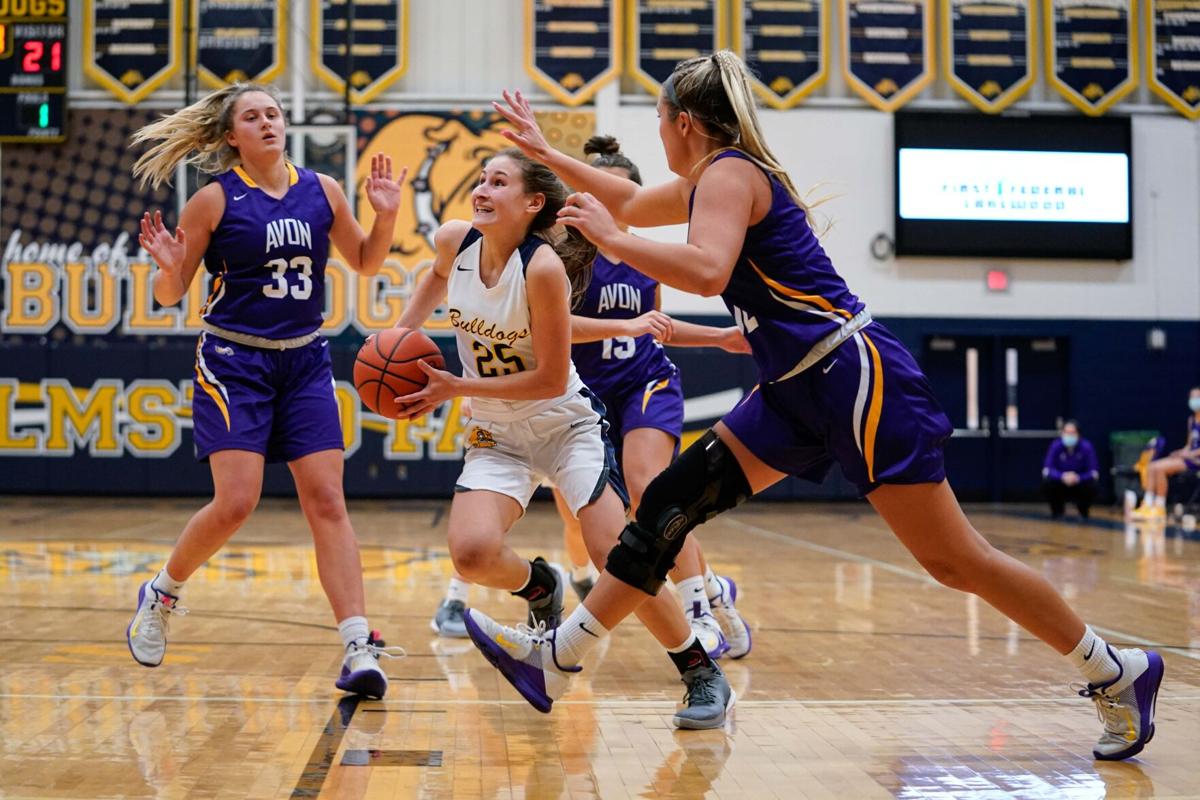 Olmsted Falls sophomore guard Paige Kohler did most of her offensive damage in the second half of her team’s season-opening win over visiting Avon Dec. 14, scoring 13 of her 17 total points over the last 16 minutes of regulation. 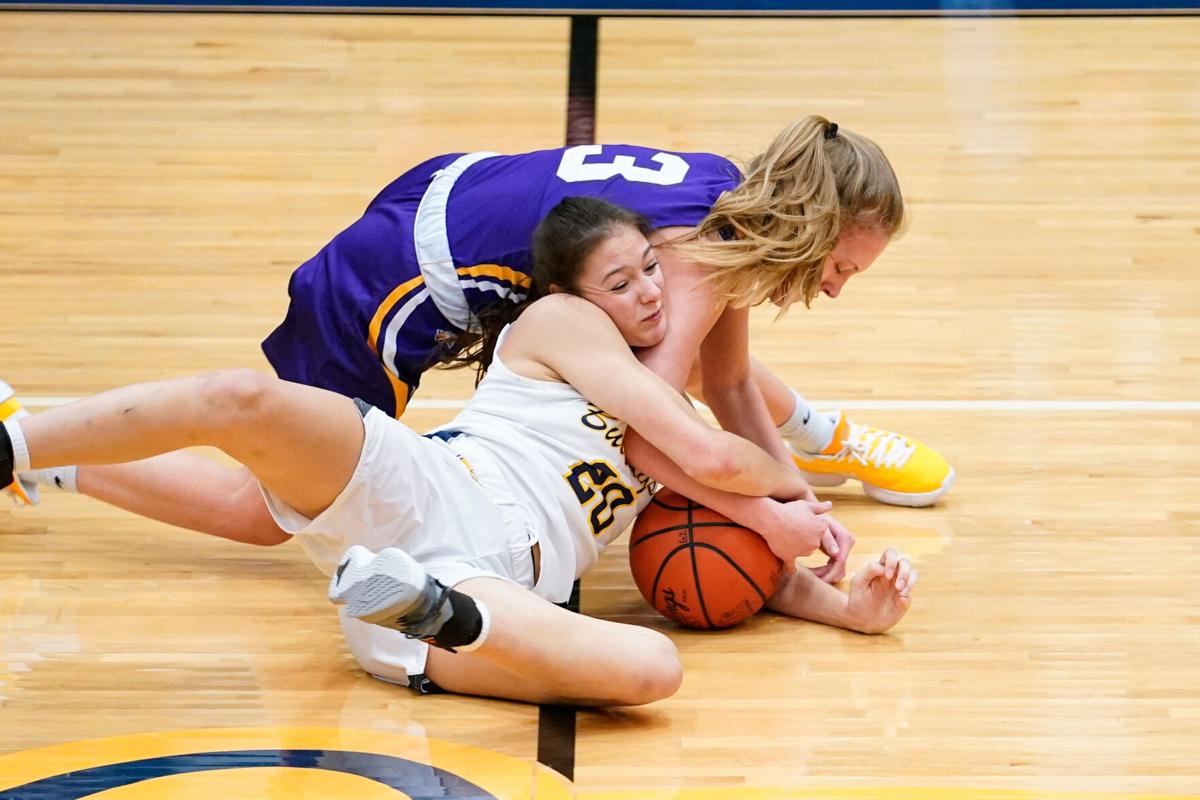 Forwards Mia Kalich of Olmsted Falls and Alyssa McLellon of Avon battled for loose balls all evening. The Eagles committed 18 turnovers in the 52-32 loss, while the Bulldogs committed 14. 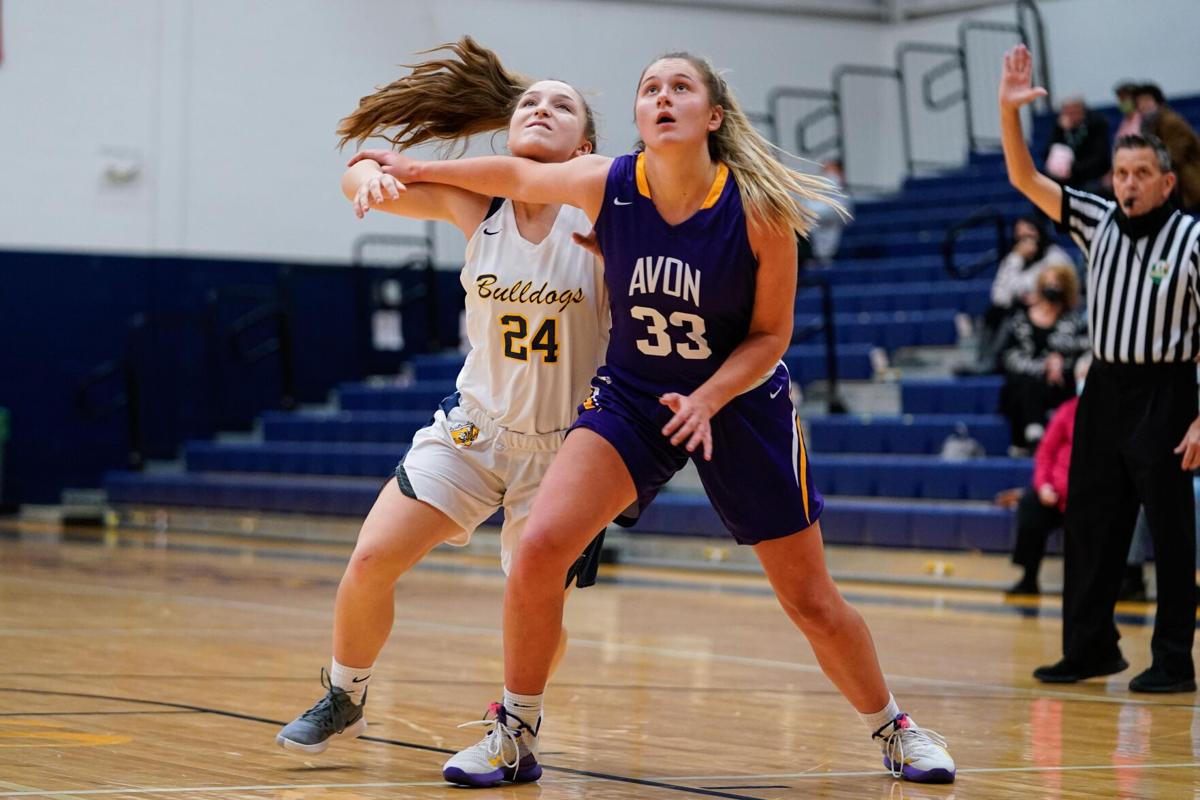 Despite carrying a height advantage into their season-opening game at Olmsted Falls, Avon was outrebounded 36-23.

Olmsted Falls sophomore guard Paige Kohler did most of her offensive damage in the second half of her team’s season-opening win over visiting Avon Dec. 14, scoring 13 of her 17 total points over the last 16 minutes of regulation.

Forwards Mia Kalich of Olmsted Falls and Alyssa McLellon of Avon battled for loose balls all evening. The Eagles committed 18 turnovers in the 52-32 loss, while the Bulldogs committed 14.

Despite carrying a height advantage into their season-opening game at Olmsted Falls, Avon was outrebounded 36-23.

The Avon girls basketball team came out in its season and Southwestern Conference opener Dec. 14 with the game plan to use such a dogged effort to disrupt defending league champion Olmsted Falls. But after nine fouls were called in the first quarter it was the Bulldogs who seized control, winning 52-32.

Eagles junior Abby Liber scored a team-high 13 points, but had to sit for most of the pivotal second quarter after picking up her third foul. The host Bulldogs (1-1, 1-0 SWC), who took 19 free throws in the first half thanks to Eagle (0-1, 0-1 SWC) foul trouble, were able to build a 28-20 lead before the break that proved too much to overcome.

Before Liber and the Eagles reached 12 team fouls in the second frame, they were only down a point, 12-11.

“We came out playing physical basketball, it didn’t work in our favor tonight, and we got in foul trouble pretty quickly,” Eagles coach Meghan Larrick said. “Our rotations were a little out of sync to what our game plan was.”

“(Olmsted Falls) plays aggressive, physical basketball from the start of the game to the end of the game, and we were definitely trying to match up with that and play physical,” she said.

In the second half, the Bulldogs leaned on the staples that have made them one of the league’s best programs over the years -- patient offense and a disruptive press – to increase their lead. A 9-0 run in the third quarter, keyed by back-to-back 3-pointers by guards Paige Kohler and Lauren Noernberg, put them ahead 41-23. An 11-0 run midway through the fourth quarter made it 51-29 before both teams emptied their benches.

“I think adversity hit us today and we didn’t really respond,” Larrick said. “We didn’t capitalize on our opportunities to fight back and come back. Hopefully we can get back in the gym and work on that so we can come out more aggressive and play smarter basketball from here on out.”

Kohler scored a game-high 17 points –13 in the second half– to cushion the Bulldogs’ lead. Senior forward Grace Simon joined her in double figures with 11. Lauren Galaska and Mia Kalich added eight and seven points, respectively.

The Bulldogs shot 25% from the floor, but combined their timely scoring runs with sound defense, pressuring the Eagles into 18 turnovers. Led by nine rebounds from Kalich and five apiece from Simon and Kohler, the Bulldogs also controlled rebounding at both ends, winning that battle 36-23.

“At halftime we had a good talk and we knew we were up eight, which is still a lead, but we had to push it further because a good Avon team like that can come back,” Kohler said.

For the Eagles, the game was a struggle after the rash of early fouls. They were playing their first game after a lengthy layoff from outside competition caused by a team quarantine, then by the SWC’s decision to pause all sports for two weeks.

The Bulldogs, who opened their season with a loss to Aurora on Nov. 21, were working through a long pause of their own, though Kohler felt they were well prepared to get on with regular season contests.

“We’ve had about a week-and-a-half of practice since our quarantine, so we’ve been working hard at practice every day to help us be prepared for this game (and going forward),” Kohler said.

Avon will travel to Westlake on Wednesday for a 7 p.m. start.