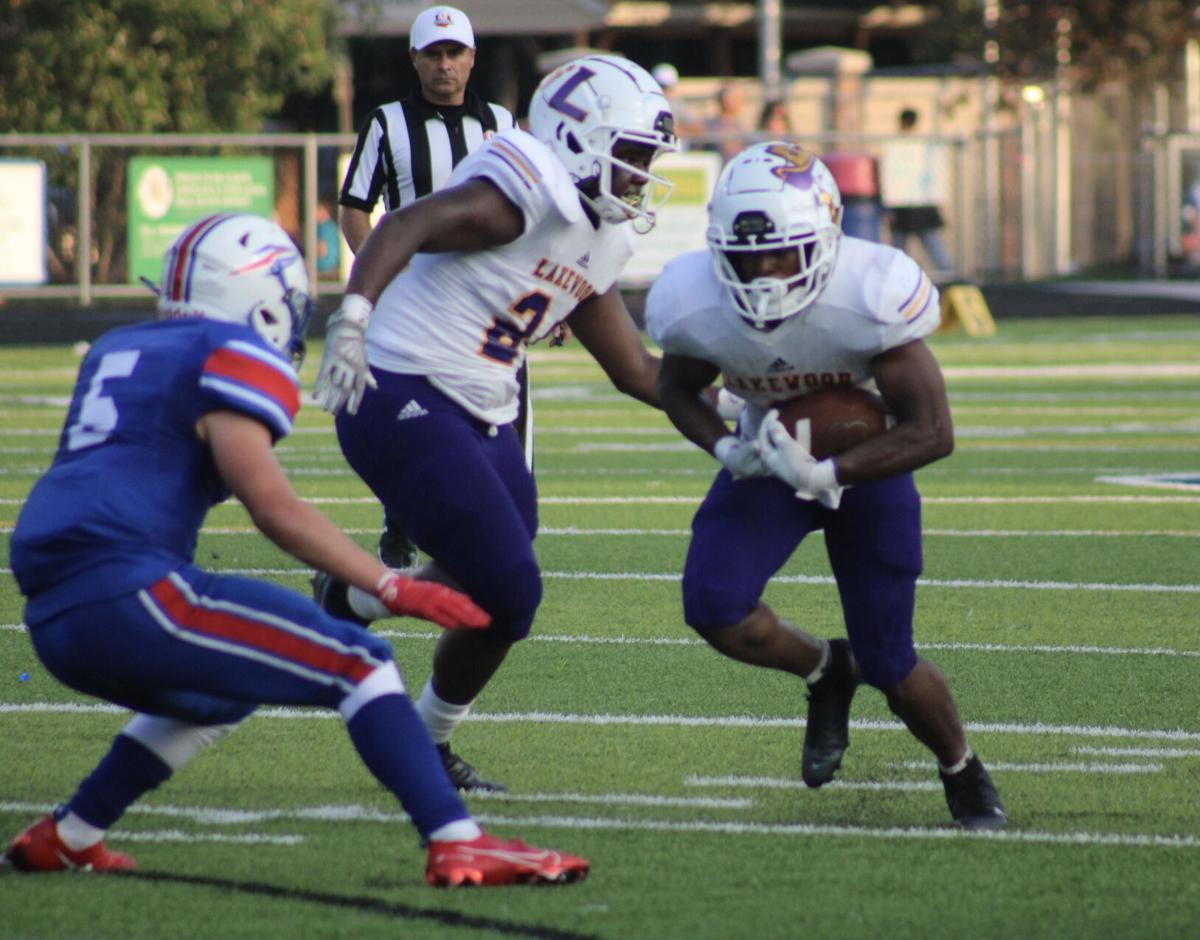 For the second straight week, Lakewood senior running back Hakeem Quran surpassed 200 yards on the ground, and his team won its second straight game, a 29-10 decision over Bay, on Aug. 27. Quran totaled 23 carries, and scored three third-quarter touchdowns. 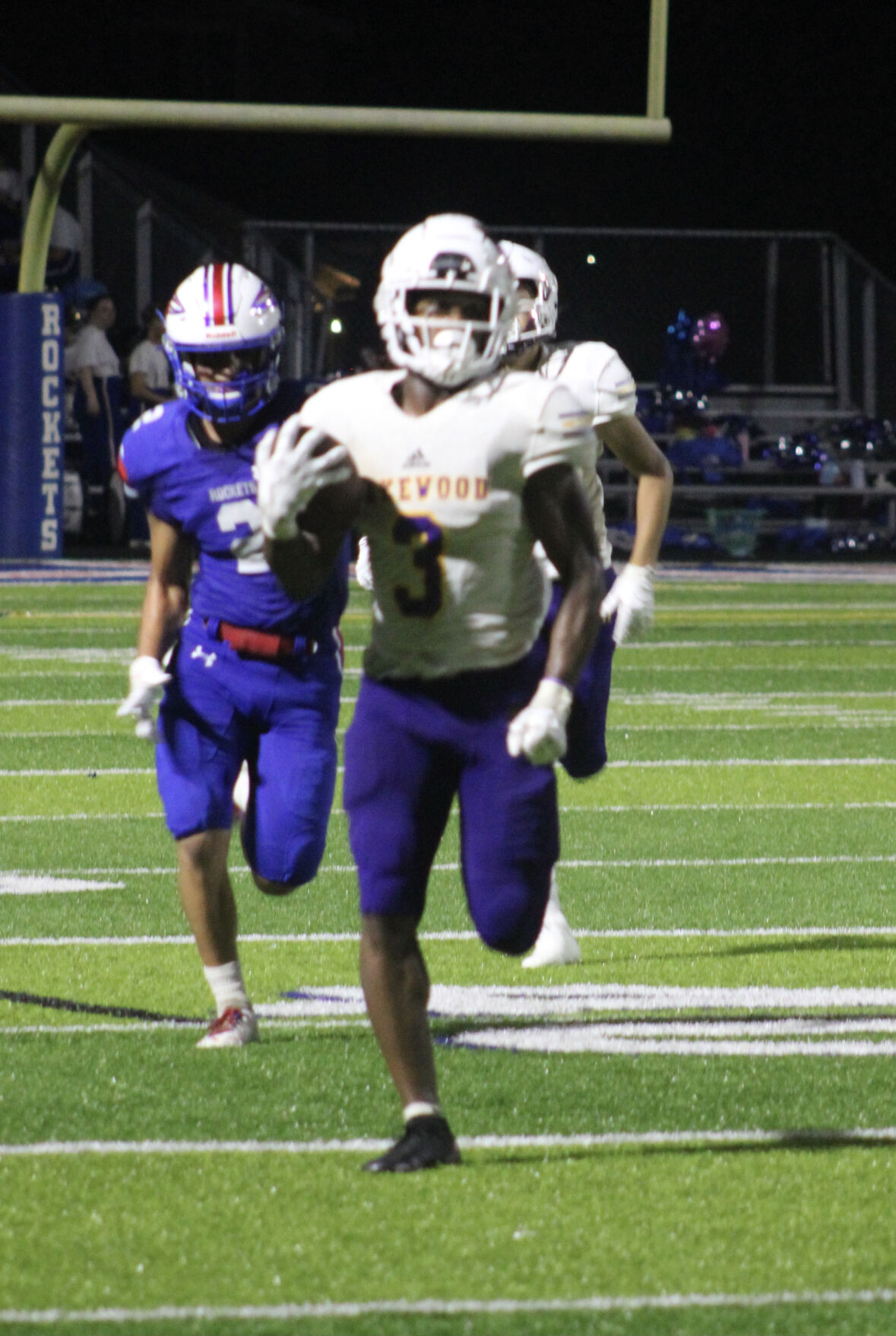 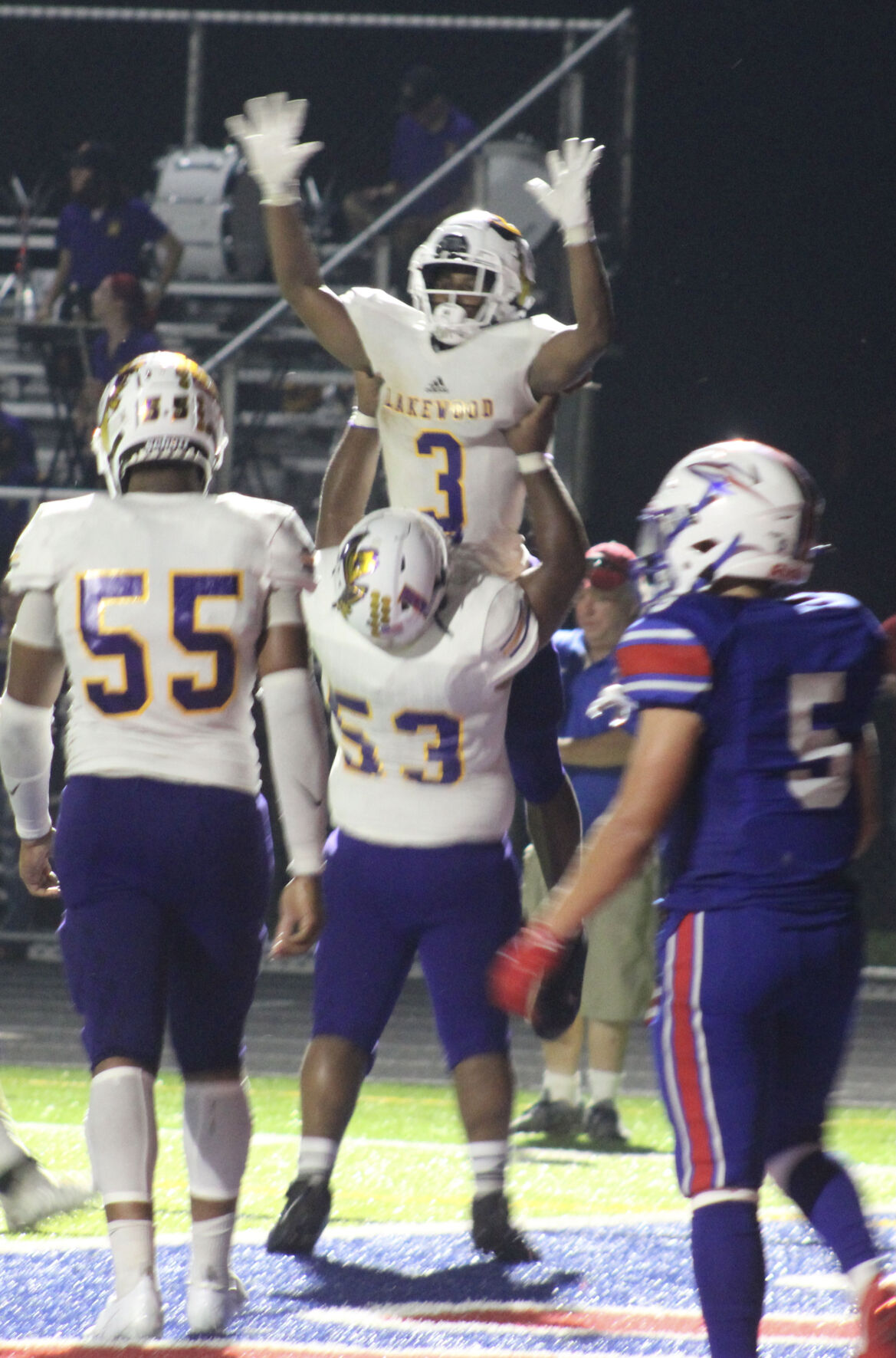 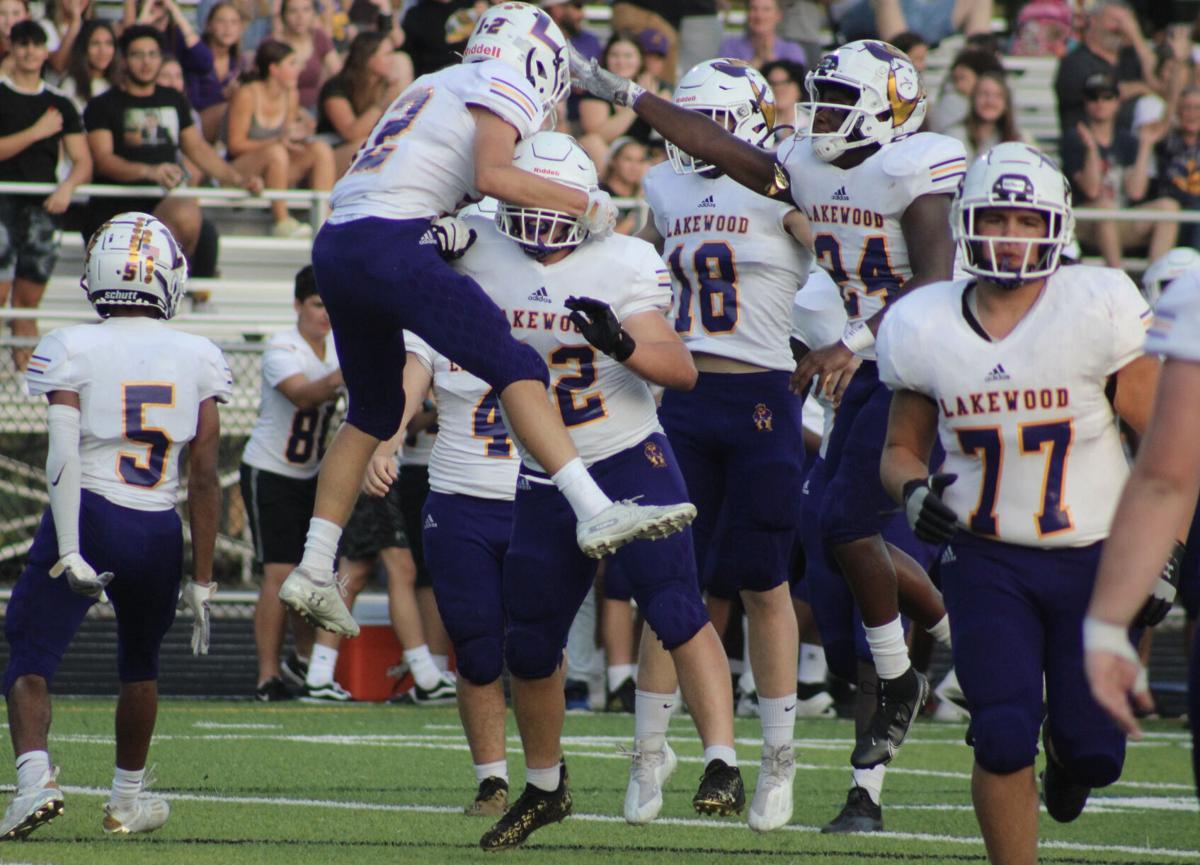 Lakewood receiver Eddie Gillick got his team on the scoreboard with a 16-yard touchdown catch during the first quarter of a game at Bay on Aug. 27. 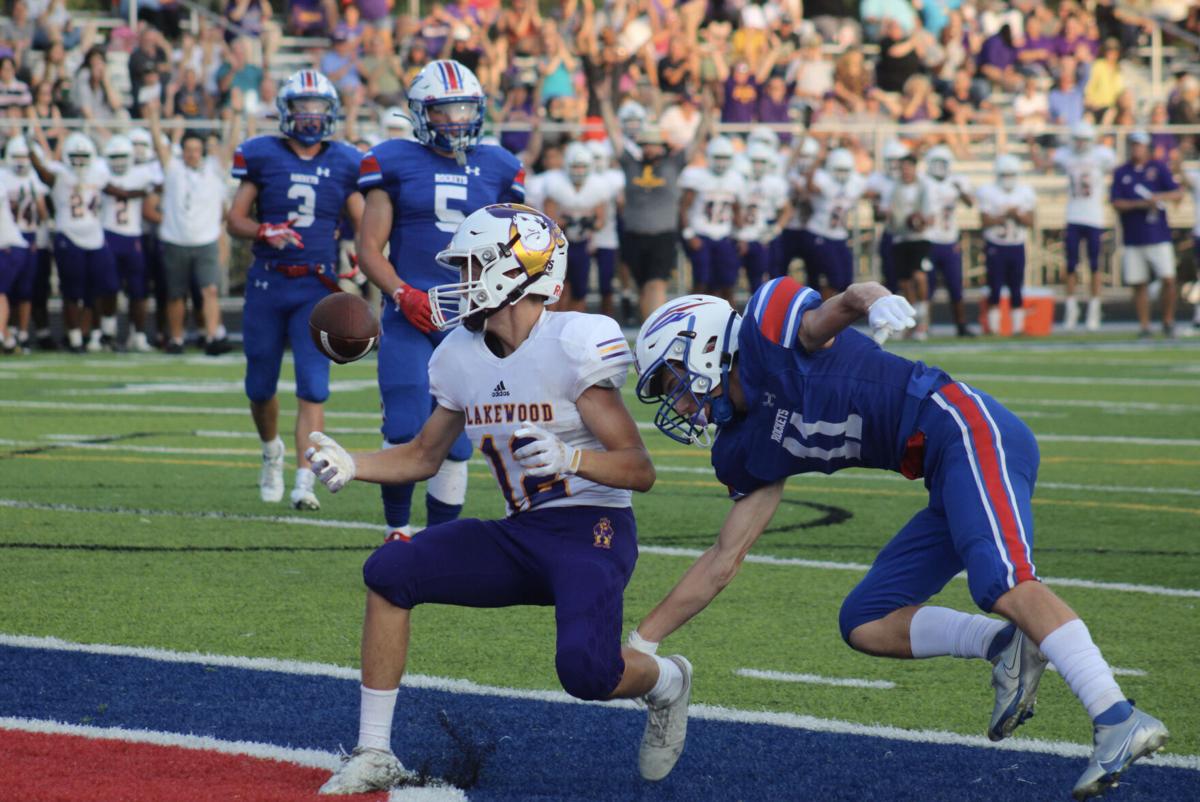 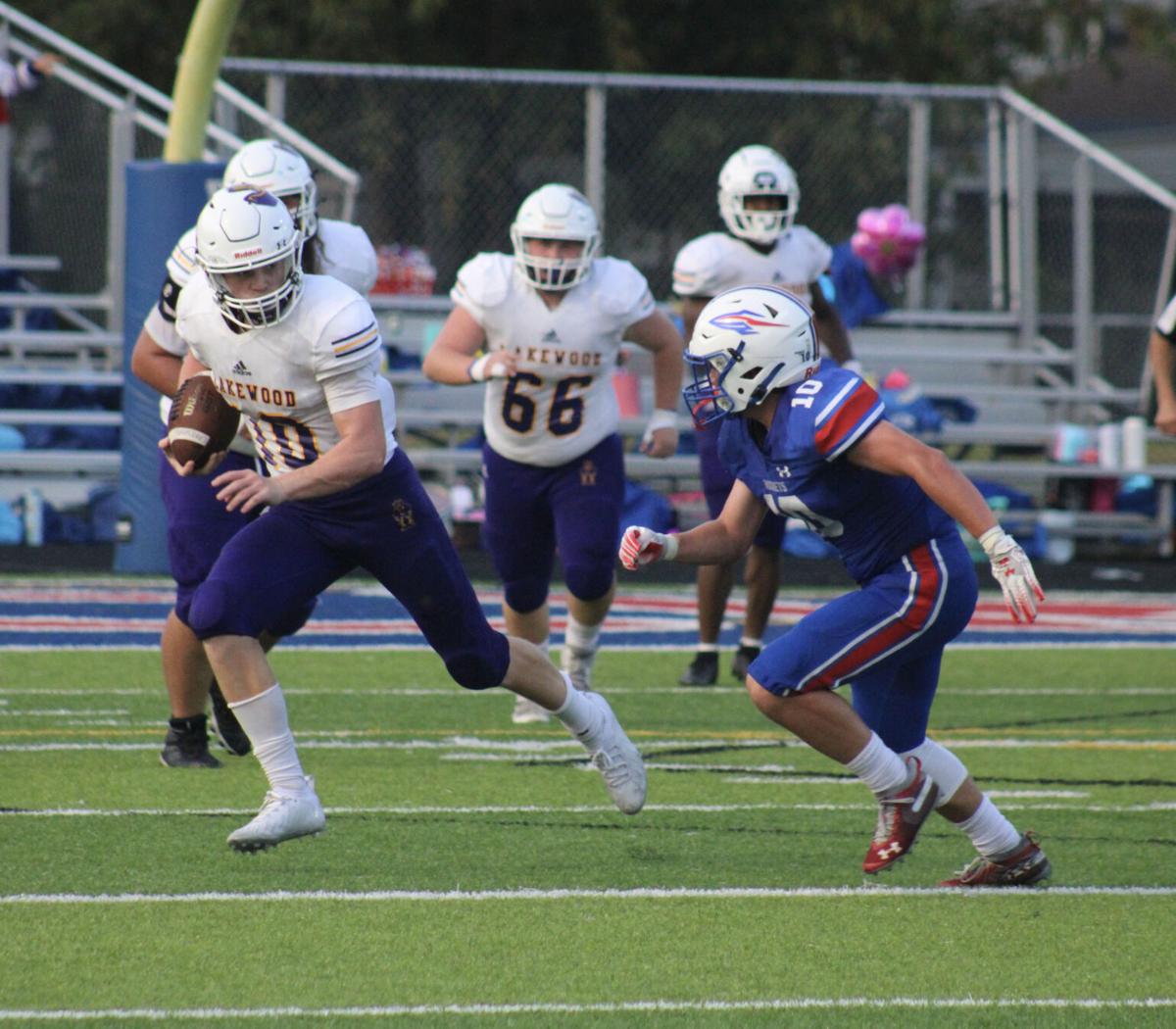 Lakewood quarterback Lucas Winters passed for 80 yards and rushed for 21 during a 29-10 win at Bay on Aug. 27. 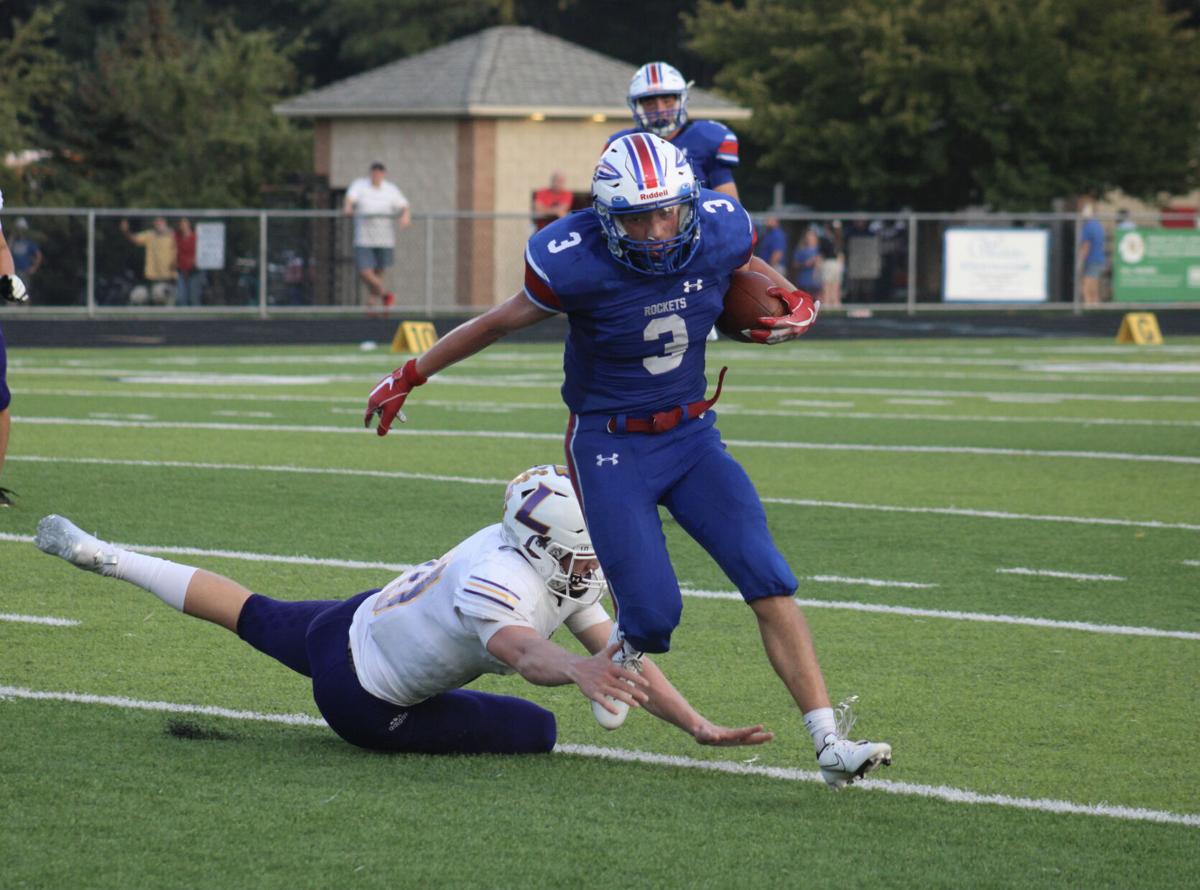 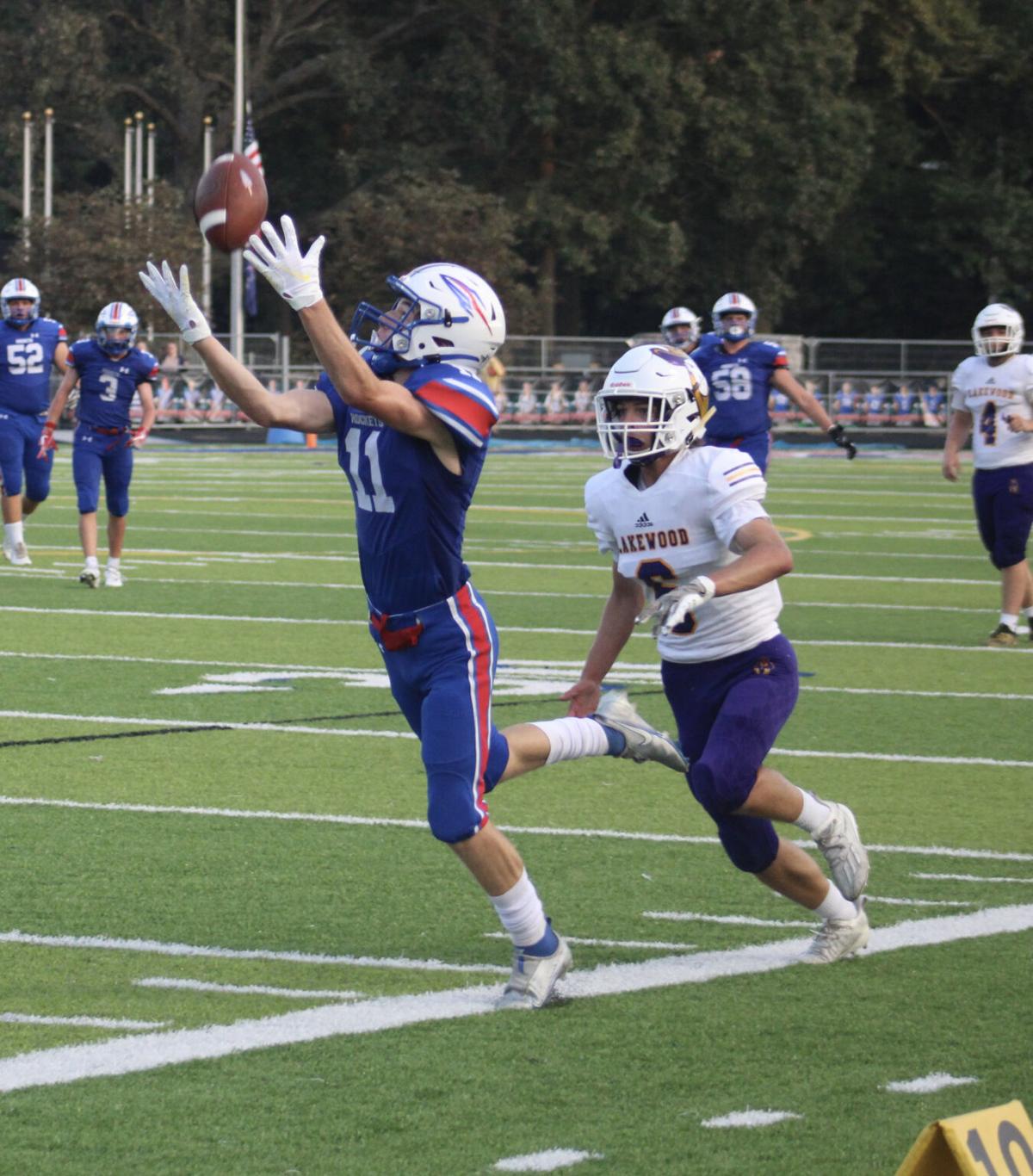 The Bay football team played its 2021 home opener against visiting Lakewood on Aug. 27, and briefly led 10-7 in the third quarter before the Rangers stormed back with three touchdowns on consecutive possessions over a three-minute stretch. 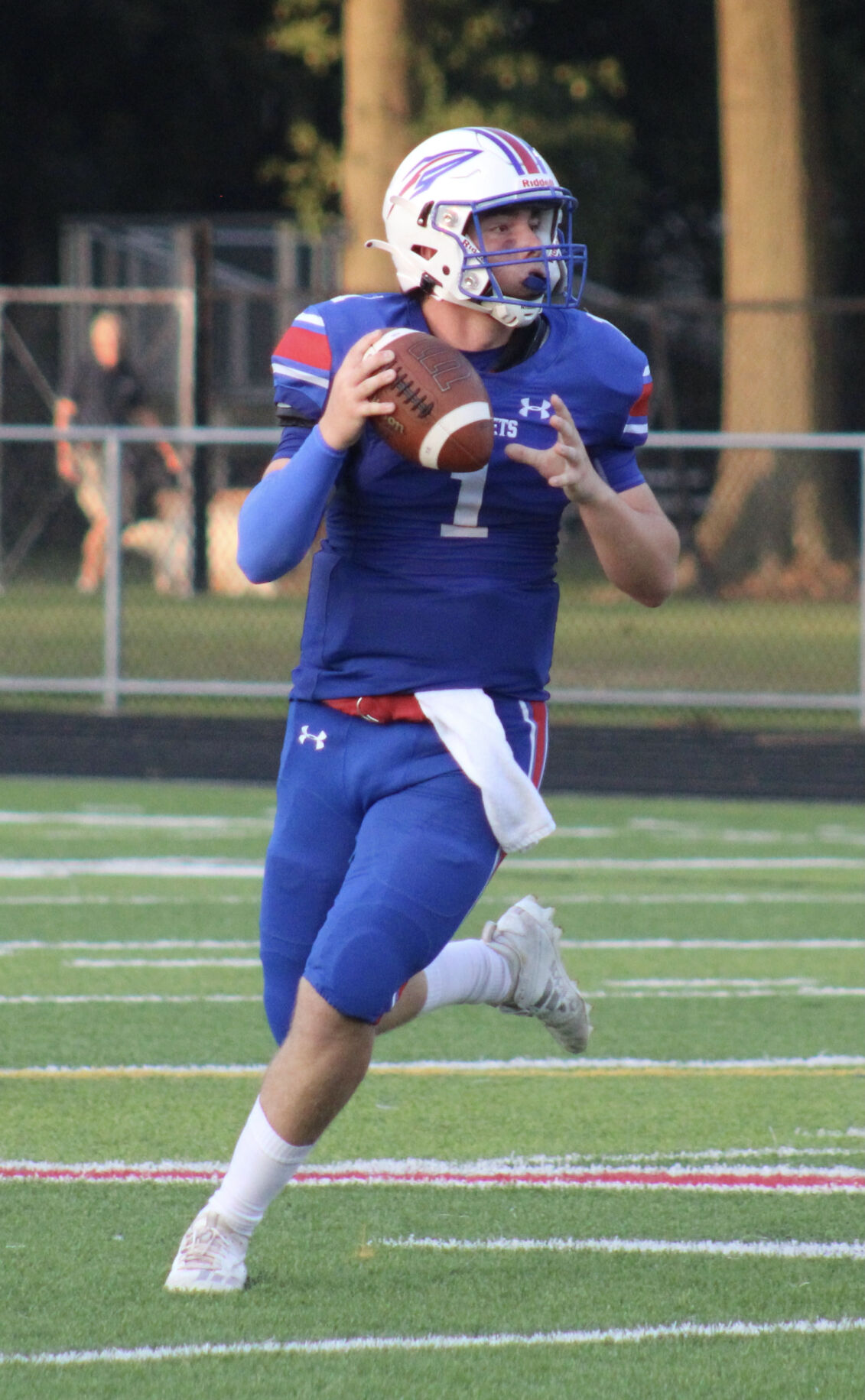 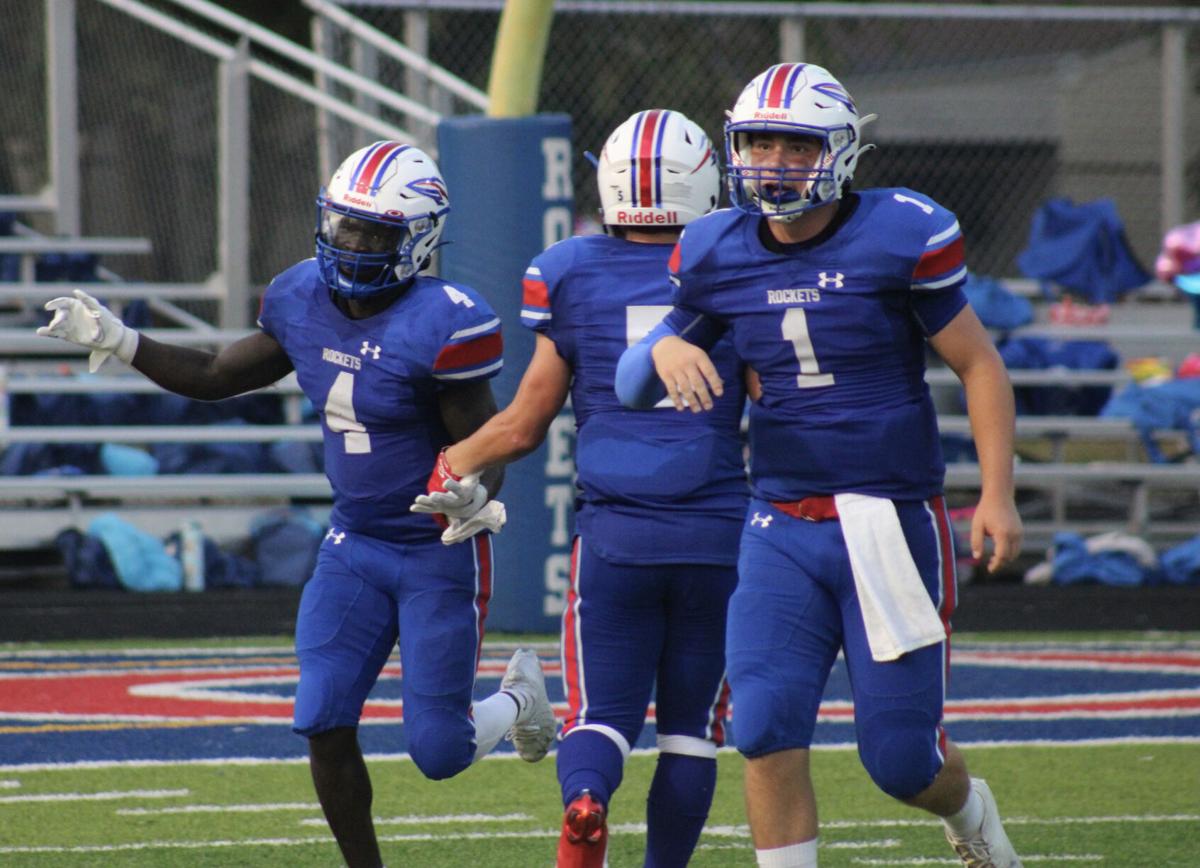 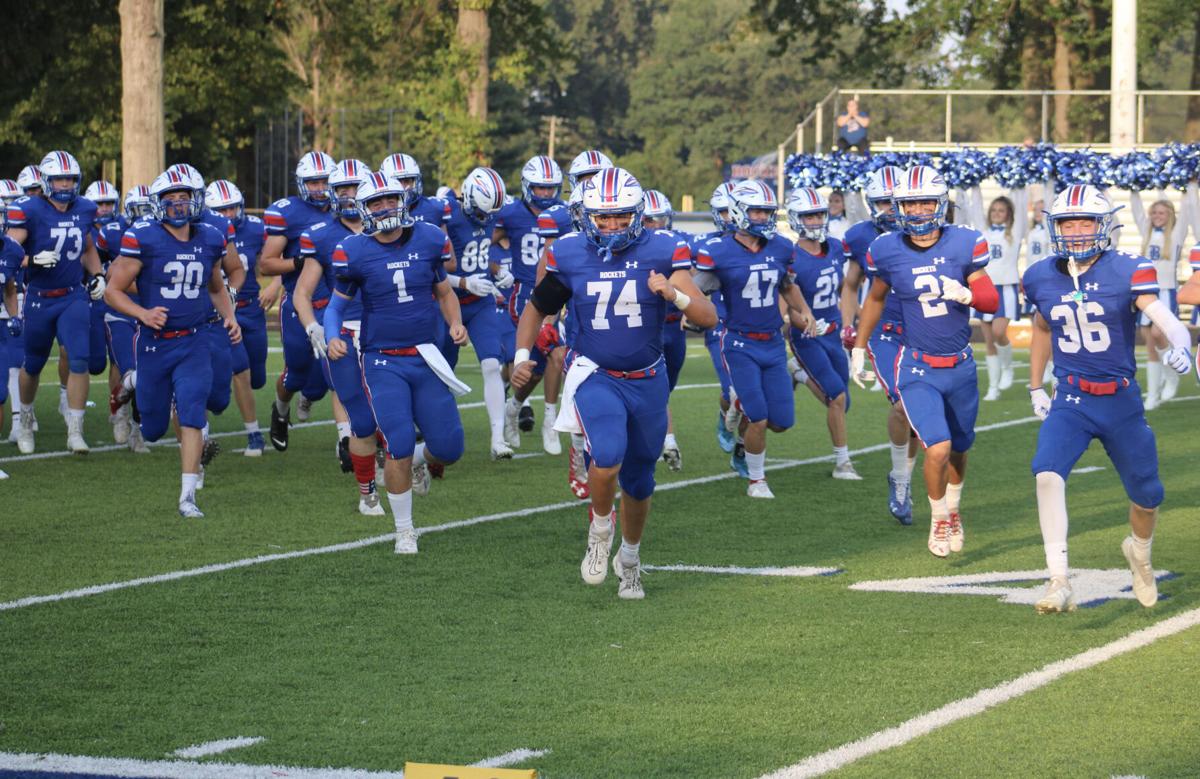 For the second straight week, Lakewood senior running back Hakeem Quran surpassed 200 yards on the ground, and his team won its second straight game, a 29-10 decision over Bay, on Aug. 27. Quran totaled 23 carries, and scored three third-quarter touchdowns.

Lakewood receiver Eddie Gillick got his team on the scoreboard with a 16-yard touchdown catch during the first quarter of a game at Bay on Aug. 27.

Lakewood quarterback Lucas Winters passed for 80 yards and rushed for 21 during a 29-10 win at Bay on Aug. 27.

The Bay football team played its 2021 home opener against visiting Lakewood on Aug. 27, and briefly led 10-7 in the third quarter before the Rangers stormed back with three touchdowns on consecutive possessions over a three-minute stretch.

Pacing in front of an end zone at Bay Memorial Stadium, Tom Thome was starting to lose his voice.

His Lakewood football team, now collectively taking a knee, had just beaten the Rockets 29-10 on a humid Aug. 27, and he wanted to make sure every member of the roster could hear and feel the emotion of the moment.

He yelled at his team and pointed to the scoreboard, still illuminated with the game’s final tally. But it wasn’t out of anger. It was positive, and his passion for what the Rangers had accomplished was breaking through.

He had his team’s rapt attention. After their performance, they should receive the same from the rest of the Great Lakes Conference.

Down 10-7 midway through the third quarter, the Rangers (2-0) tightened defensively and broke some huge plays on offense, scoring 22 unanswered points to close the frame and secure the win.

“My team, we didn’t quit,” said Rangers senior Hakeem Quran, who rushed for 230 yards and all three of those third-quarter touchdowns on 23 carries. “I told them, we’re not quitting. The score was 7-7, then I scored (the first time), and I’m like, I’ve got to score some more. And that’s when the momentum came and we got the dub.”

It was the type of rally the Rangers wouldn’t have mustered three years ago, when Thome and his staff first took over a reeling program that was lean on players and leaner on good habits. The team’s last winning season was in 2012, its last playoff appearance – not counting last season’s pandemic-altered schedule – in 2003.

To shake off a pair of costly turnovers and come back to beat a yearly playoff contender like the Rockets (1-1) on the road? It was a big step for the Rangers, now 2-0 for the first time since 2004.

“It’s the culture that we’re building,” Thome said. “It’s about positivity and it’s about commitment. Two years ago, last year, we don’t overcome that (deficit). One domino falls and the whole stack falls. This time they’re mentally tough, they’re drinking the Kool Aid, they’re buying in, and one mistake isn’t the end of the world. There’s a next play.”

The tide turned in the Rangers’ favor after they lost the lead.

A Quran fumble was recovered by Anthony Tulli at the Rangers’ 10, but the defense held and forced the Rockets to kick a 25-yard field goal, which Cooper Mendelow drilled to give his team its first lead of the game.

Thome’s vision for the newer, mentally-tougher Lakewood kicked in on the first play of its ensuing drive. Quran took a handoff from quarterback Lucas Winters, cut toward the visitors sideline and jetted 73 yards to the end zone to get the lead back, 14-10.

After forcing a punt, the Rangers took over at their own 25. Quran took another handoff and cut toward the home sideline this time, racing 55 yards before being brought down at the Rockets’ 9. Two plays later, he scored to help push the lead to 21-10 with 2:56 to go.

An interception of a Tony Buttari pass seconds later set the Rangers up at the Rockets’ 10 with 2:47 left, and Quran only needed one rush to find the end zone a third time. Winters ran in a two-point conversion, and the third quarter soon ended with the Rangers rolling, 29-10.

“We were just motivated,” Quran said of the rally. “It’s one word: positivity. Throughout all the years I’ve been at Lakewood, it’s been negative, and as soon as the other team scores, we’d put our heads down. This year, we keep our heads up and it’s the next play.”

The first half was a far cry from the fateful third quarter, as the teams traded defensive stands. Winters hit wideout Eddie Gillick on a 16-yard slant for a touchdown with 2:16 left in the first quarter for a 7-0 lead, but the Rockets eventually responded right before halftime when Pawie Ault ran four yards for the tying touchdown to cap a six-play drive. It was set up by Malachi Edgerly’s recovery of a Winters fumble at the Ranger 25.

After Mendelow’s field goal to briefly take the lead in the third, the Rockets punted to end three of their last four drives of the night. For the half, they gained a total of 17 yards.

“We started the third the way we wanted to, picked up a couple of first downs and just couldn’t punch it in,” Rockets coach Ron Rutt said of their half-opening drive. “Then our defense knocked the ball out and recovered a fumble and we had 1st and 10 on the 10-yard line and again just couldn’t punch it in. That was big. We settled for a field goal, and that long rush (Quran) had on the next drive, I wouldn’t say that was a backbreaker, but it really got momentum going in their direction, big time.”

Buttari finished 4-of-15 passing for 25 yards. Ault had 21 yards on nine carries, while Brendan Spellman had 42 yards on 10 carries. In all, the Rockets had 77 yards of offense.

The Rangers put up 386 yards, 306 of them on the ground. Winters completed 6 of 12 passes for 80 yards while also rushing for 21. In the fourth quarter, Chancellor Moses ran eight times for 24 yards and helped salt the game away.

This Friday, Lakewood will host Fairview (0-2), while Bay heads to University School (1-1) on Saturday. Both games start at 7 p.m.