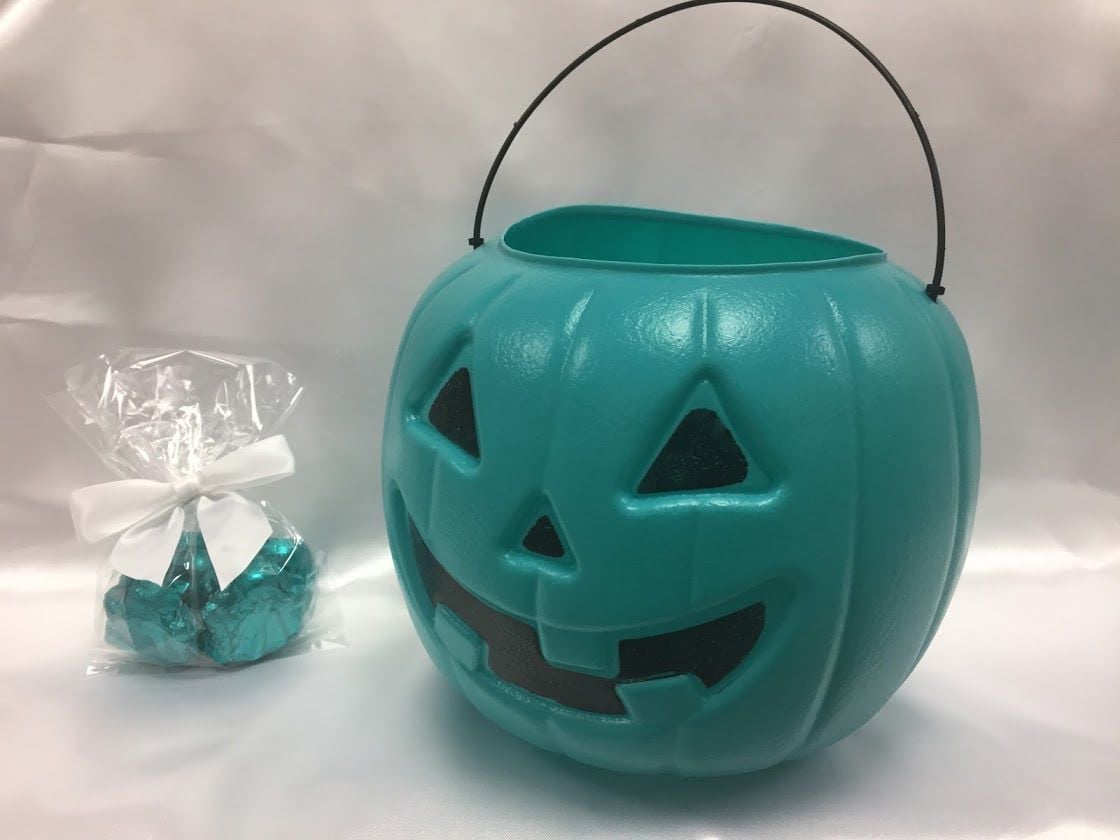 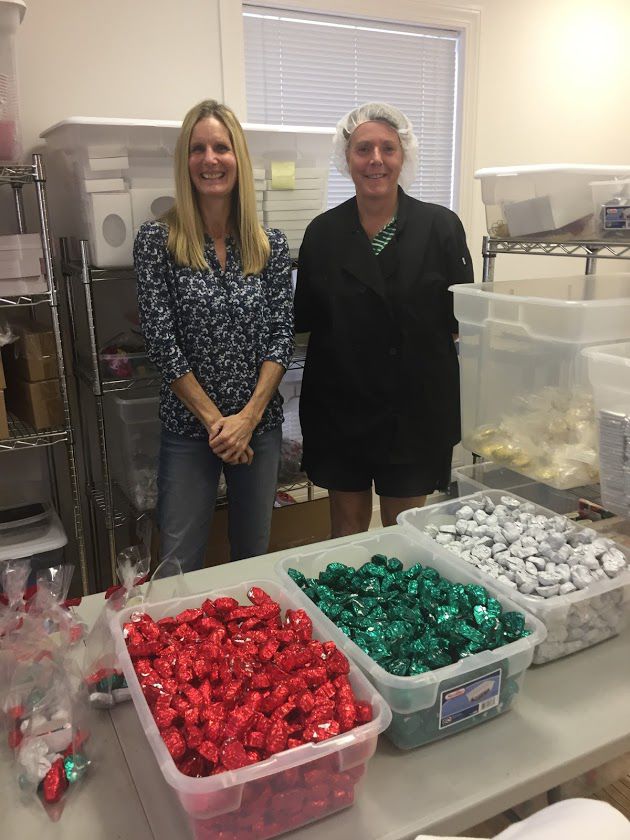 Beth Cherico, left, and fellow chocolatier Heather Johnston work at Amanda's Own Confections to provide chocolate treats safe for those suffering from allergies.

Beth Cherico, left, and fellow chocolatier Heather Johnston work at Amanda's Own Confections to provide chocolate treats safe for those suffering from allergies.

WESTLAKE — Beth Cherico will have a teal pumpkin outside her house this Halloween. She won’t be alone. The Westlake chocolatier entrepreneur is part of a growing movement.

Since 2012, food allergy activists and parents have used teal pumpkins to enable children to be children at Halloween time, regardless of physical issues.

Started by a Tennessee mother, the now international movement called the Teal Pumpkin Project is a way to “create a safer, happier Halloween for all,” according to Cherico.

Putting a teal pumpkin on your doorstep means you have non-food treats available, such as glow sticks or small toys, she said. “It indicates to parents that it is safe for trick-or-treaters with food allergies,” she said.

Teal pumpkins can be found in mainstream stores such as Target and Walmart.

More than 170 foods have been reported to cause allergic reactions, according to the Food Allergy Research & Education (FARE) group. The worst offenders are milk, eggs, peanuts, tree nuts, wheat, soy, fish and shellfish. The symptoms of an allergic reaction to food can range from mild (itchy mouth, a few hives) to severe (throat tightening, difficulty breathing). Anaphylaxis is a serious allergic reaction that is sudden in onset and can cause death.

“Researchers estimate that up to 15 million Americans have food allergies, including 5.9 million children under age 18. That’s 1 in 13 children, or roughly two in every classroom. About 30 percent of children with food allergies are allergic to more than one food,” according to FARE’s website, foodallergy.org.

Cherico’s support of the Teal Pumpkin Project is personal. Her daughter Amanda, born in 2000, was her and her husband Stephen’s second child. They had no concerns when Amanda was 14 months old and the pediatrician recommended weaning her and feeding her a few ounces of formula.

Amanda’s physical reaction was immediate and alarming. The toddler turned red and was instantly in distress.

“We rushed her to the emergency room,” said Cherico, talking recently about her now 18-year-old, college student daughter. “It turned out she had a severe dairy and egg allergy. They had to use an EpiPen. We had no history in our family of food allergies, and her older sister, Jessica, never had a problem.”

Life went on, but adaptations had to be made. In order to still share in mother-daughter moments such as baking cookies, and not to mention the joys of trick or treating on Halloween, Cherico started creating recipes without dairy or eggs. Soon she had come up with a dairy-free chocolate recipe, followed by chocolate-chocolate chip cookies and double-chocolate chip cookie dough.

“So many of my friends said they had never seen anything like it,” she said of her chocolate creations. Cherico, an occupational therapist, in 2005 started Amanda’s Own Confections in her Westlake home. Primarily a mail-order business, the business soon expanded to a small, segmented office (to avoid cross-contamination) on Center Ridge Road, where it still is located. Four employees and Cherico work in a large main room filled with boxes and packing materials. That room, plus the kitchen, wrapping room and storage area in the back are filled with the pungent aroma of chocolate.

She prefers to not name a specific monetary figure for Amanda’s Own Confections, but laughs and says “It’s not a million-dollar business. We also sell in boutique stores such as the Mustard Seed and Fear’s Confections.” Cherico estimates the company sells to about 20 stores and makes thousands of shipments annually all over the country and in Canada.

“We want to be in bigger stores, but we struggle to make sure it is safe,” she added. There’s always the worry about cross-contamination. “If someone touches something like peanut butter, and then picks up our candy and puts it back, the next person to pick it up may have a peanut allergy and have a reaction.”

This time of year, many of Cherico’s chocolates are in teal wrappers. And she proudly displays a teal pumpkin.

The pumpkin has also saved parents of allergic children from using what they used to call the “switch witch,” said Cherico. “We used to say the ‘switch witch’ came to our house and when Amanda came home with a bag of candy, we would switch it out for whatever the switch witch left.”

Amanda, now a freshman at the University of Cinncinnati, has for the most part outgrown her allergies. “She still avoids the foods, but has very mild reactions,” said Cherico. “We are very lucky.”

Meanwhile, Cherico is touting the use of teal pumpkins.

“They can really save lives,” she said.