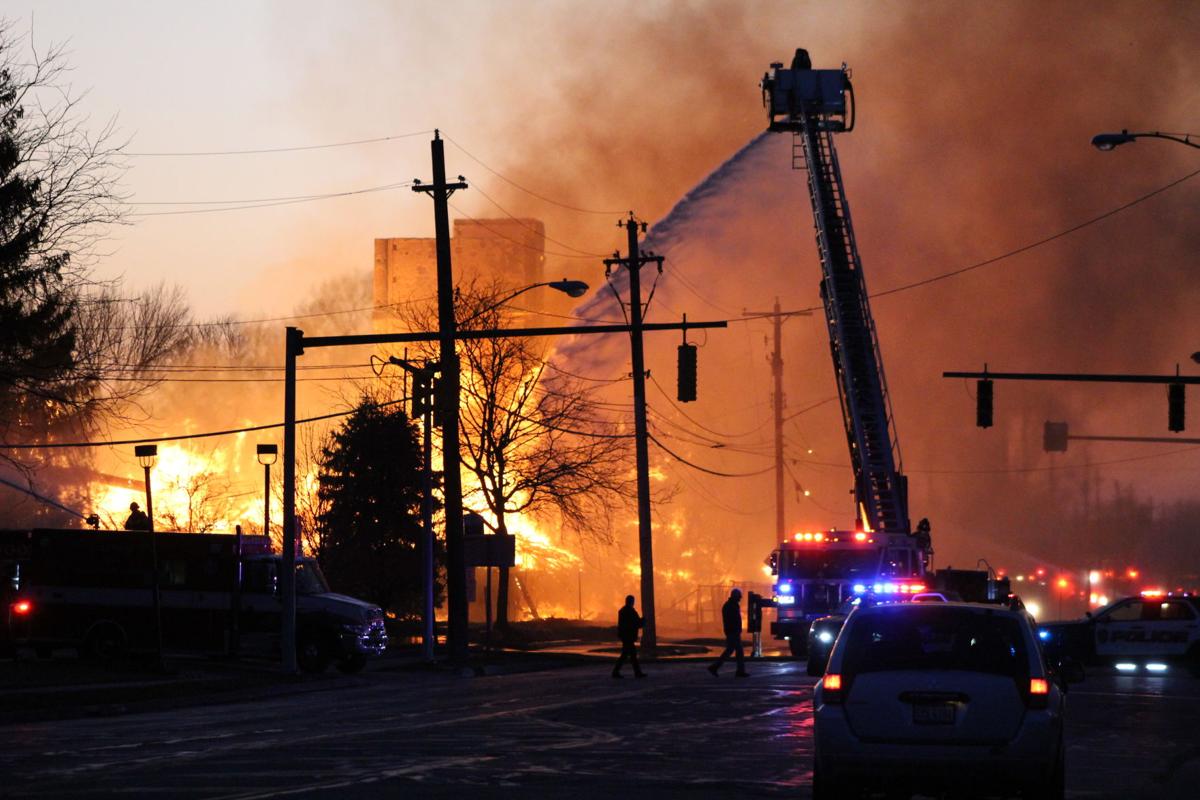 Police worked to keep onlookers away from the intense blaze Sunday on Hilliard Boulevard, just west of the Hilliard Road Bridge. 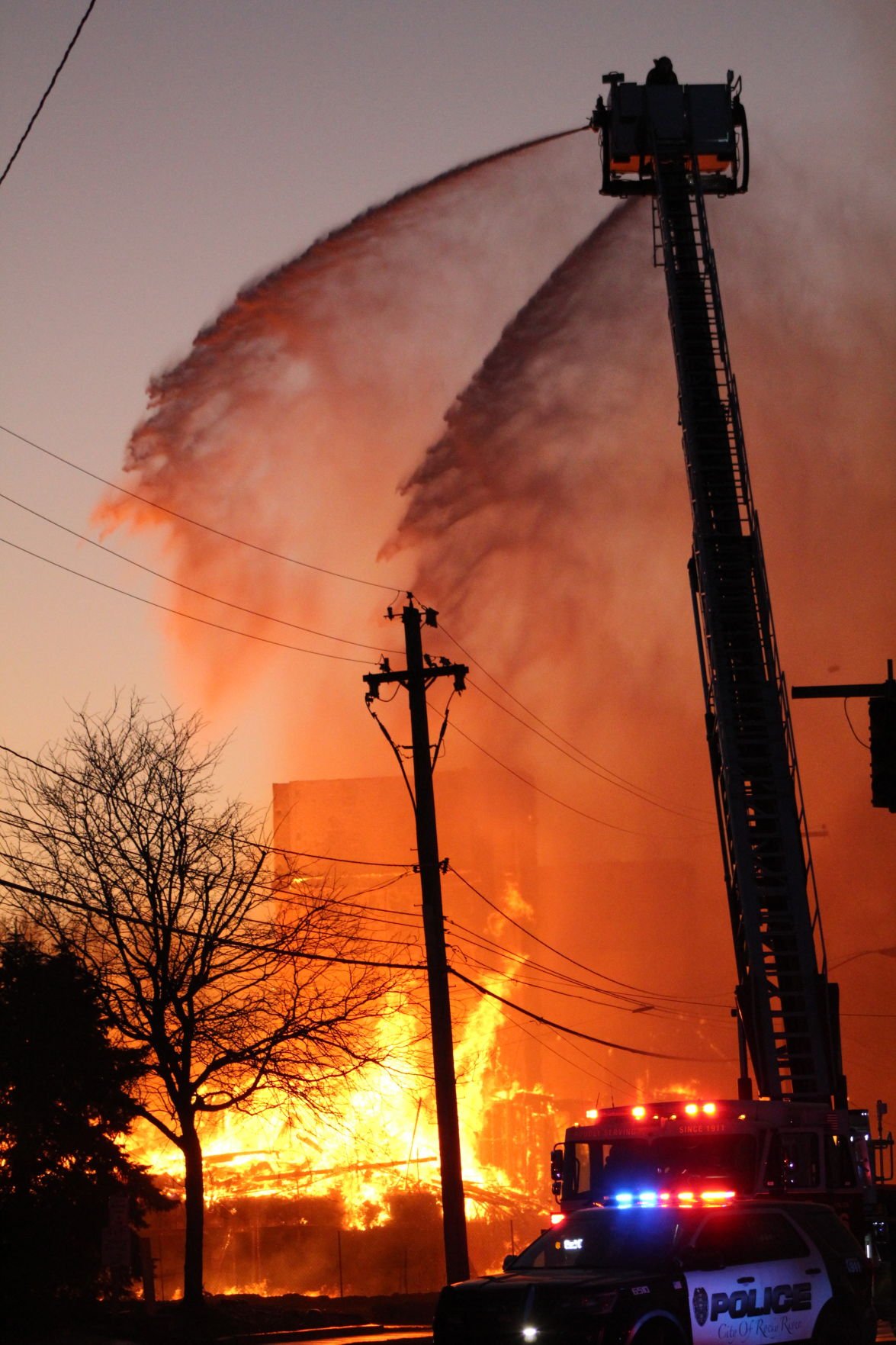 Water arches had little impact on the fire during its height at about 6:45 p.m. Sunday. 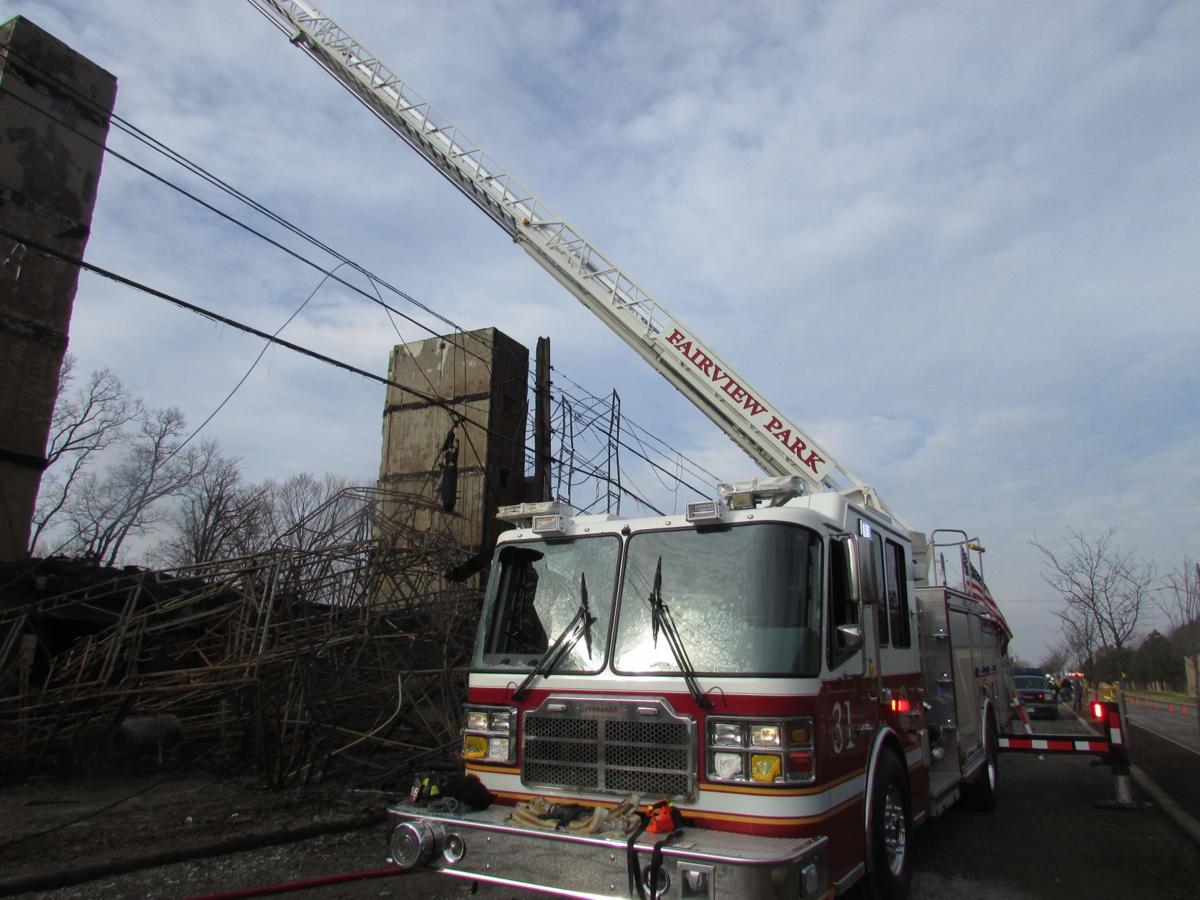 Mangled fencing and scaffolding, and three elevator shafts are all that remained Monday of a four-story condominium building under construction.

Police worked to keep onlookers away from the intense blaze Sunday on Hilliard Boulevard, just west of the Hilliard Road Bridge.

Water arches had little impact on the fire during its height at about 6:45 p.m. Sunday.

Mangled fencing and scaffolding, and three elevator shafts are all that remained Monday of a four-story condominium building under construction.

An inferno Sunday evening that could be seen for miles and created heavy smoke that showed up on weather radar destroyed a four-story luxury condominium building under construction along the edge of the Rocky River valley. No one was injured, although 12 residents had to evacuate from a nearby apartment building.

Firefighters from seven communities tried to contain the blaze from spreading as hundreds of onlookers clustered on nearby streets and on bridges over Interstate 90 to watch the conflagration consume the building on Hilliard Boulevard just east of Joe’s Deli and west of the Hilliard Road Bridge.

State and local fire inspectors picked through the charred remains of the $7 million Rockport Condo project Monday to try to piece together what caused the fire, which was reported about 5:55 p.m. Sunday. The fire was extinguished by 9:30 p.m., but not before it leveled all but three concrete elevator shafts of the building and damaged the side of the nearby apartment complex. Firefighters stayed on scene until 3 p.m. Monday as a safeguard against hidden hot spots.

Rocky River Fire Chief Aaron Lenart said it was the biggest blaze he’s seen in 29 years as a firefighter. The intensity, he said, was fueled by large amounts of wood on site and 13 mph winds.

The 17 Rocky River firefighters at the scene were assisted by firefighters from Avon, Bay Village, Fairview Park, Lakewood, North Olmsted and Westlake.

The cause of the fire has not been determined, said Investigator Jeff Koehn of the state fire marshal’s office.

“It’s a big fire and we’ll be going over everything for the next couple of days,” Koehn said Monday. Investigators were looking for places where the fire started, he said.

Construction workers were working on the project Saturday, but were not there Sunday, said Dan Hazlett of Pride One Construction Co. of Medina.

“There weren’t any problems at the site when we left,” Hazlett said in a brief interview Monday afternoon at the scene. “The work has been going well since we started (in the fall). It looks like everything went up fast.”

The damage is extensive, with workers still trying to determine when the project can resume, Hazlett said.

“There’s a lot of it, but thankfully nobody was in the building or near enough to get hurt,” Hazlett said. “You can rebuild a building. You can’t get a life back.”

The project was to feature 24 luxury condos overlooking the Rocky River Metroparks Reservation. Each unit had a private balcony, and either two or three bedrooms. Prices per condo started at $335,000. The development, a collaboration between developer Brent Zimmerman and Pride One, broke ground Aug. 5 and was expected to be finished this spring.

The fire, less than 100 yards from I-90, was so massive that police closed the westbound lane of I-90 at McKinley Avenue in Lakewood and eastbound at Detroit Road in Rocky River. Flaming debris sparked smaller fires on the opposite side of the highway berm, according to videos posted by drivers who were on the highway.

The fire was blowing debris onto the roadway and nearby buildings, so the section of Hilliard between Wooster Road and Valley Parkway was closed, with the final section reopening late Monday afternoon. The fire was out by about 9:30 p.m. Sunday, with firefighters knocking down hot spots and making sure it didn’t reignite.

The fire was well underway when Rocky River firefighters arrived, Lenart said. “We had to go into a defensive posture to make sure it didn’t get too far.”

Ken Mullen was home in one of the apartments next door and he said he went outside after hearing a noise shortly before 6 p.m. Sunday.

“I heard a crackle and went out to look and within about 30 seconds the fire just caught and the entire building started to go up in flames.” Mullen said. “After that things happened fast.”

Mullen said debris from the fire blew onto Hilliard and his entire building was evacuated pretty quickly.

He said he was allowed back in his apartment shortly after midnight.

Nick Landyn of Lakewood checked Monday morning on his sister, who also lives in the building.

“We were concerned that her building might have caught on fire too because there were a lot of flames,” Landyn said.

His sister wasn’t home, but her apartment had a broken window.

Rocky River residents who were forced to flee their homes because of their proximity to the fire received assistance from the American Red Cross, according to a news release.

Three people received immediate financial assistance to help them find shelter Sunday, when they indicated they had no other place to stay. Red Cross workers plan to continue contacting affected residents to assess their needs and provide appropriate assistance.

Five volunteers responded to the fire to distribute blankets, water and snacks to the residents who couldn’t return to their homes and to the firefighters.

A Rocky River pumper truck and a Fairview Park ladder truck were damaged in the course of fighting the fire.