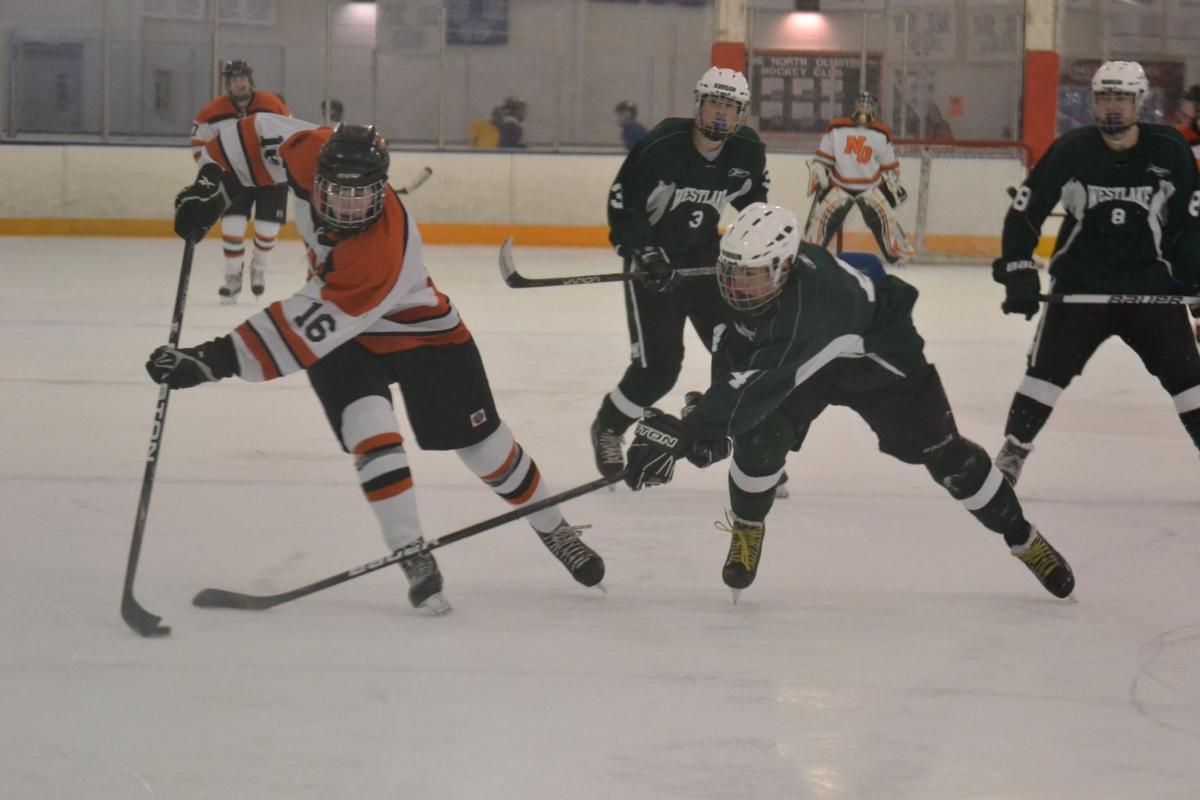 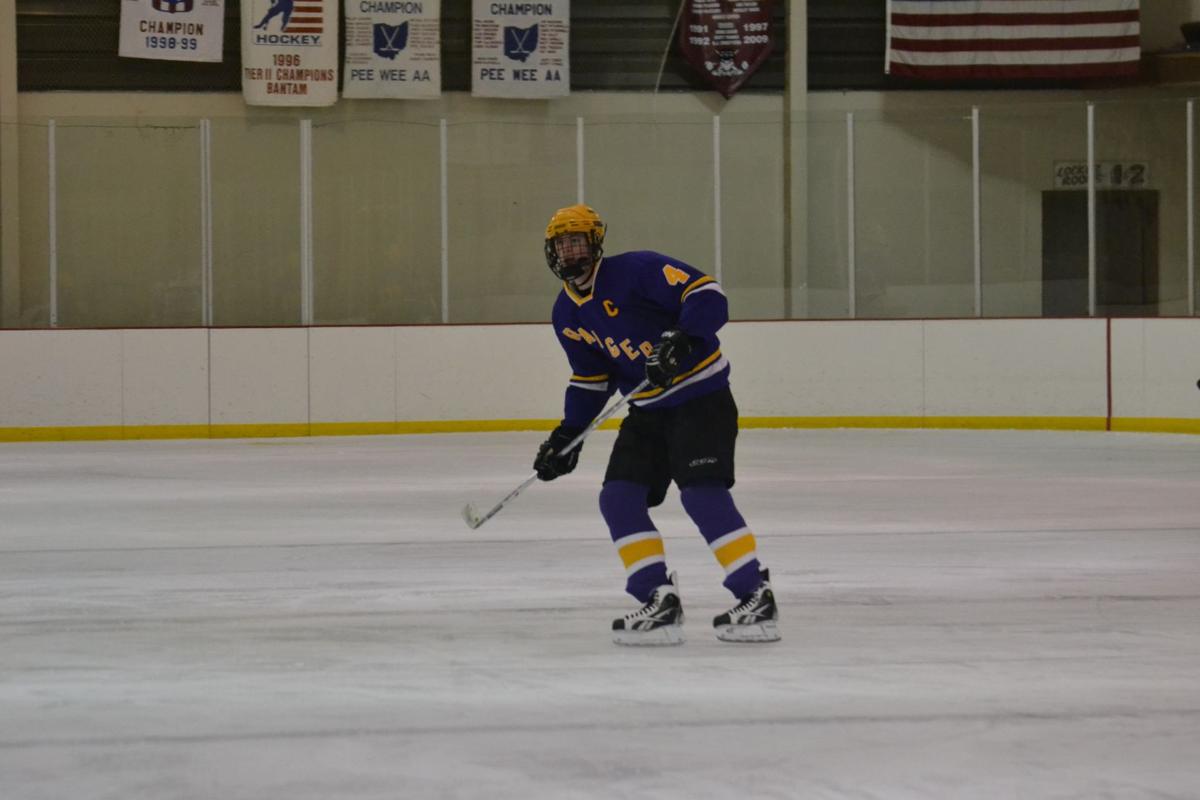 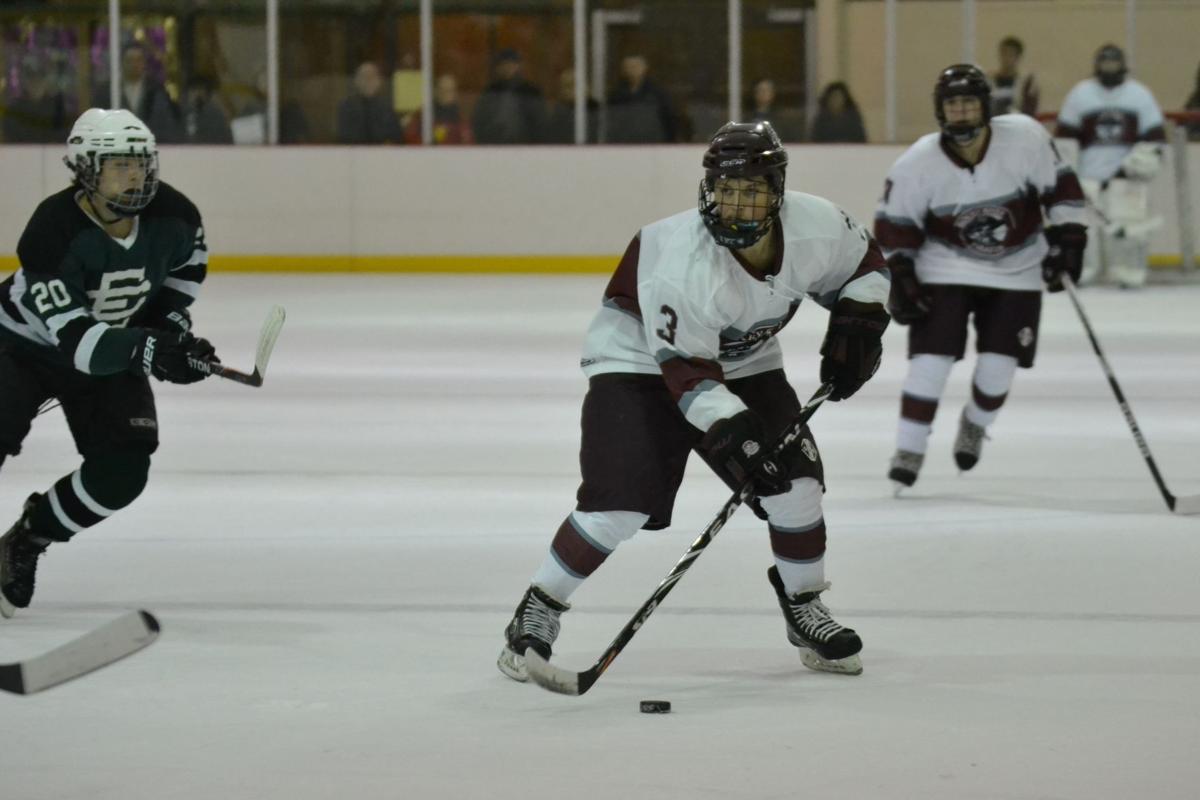 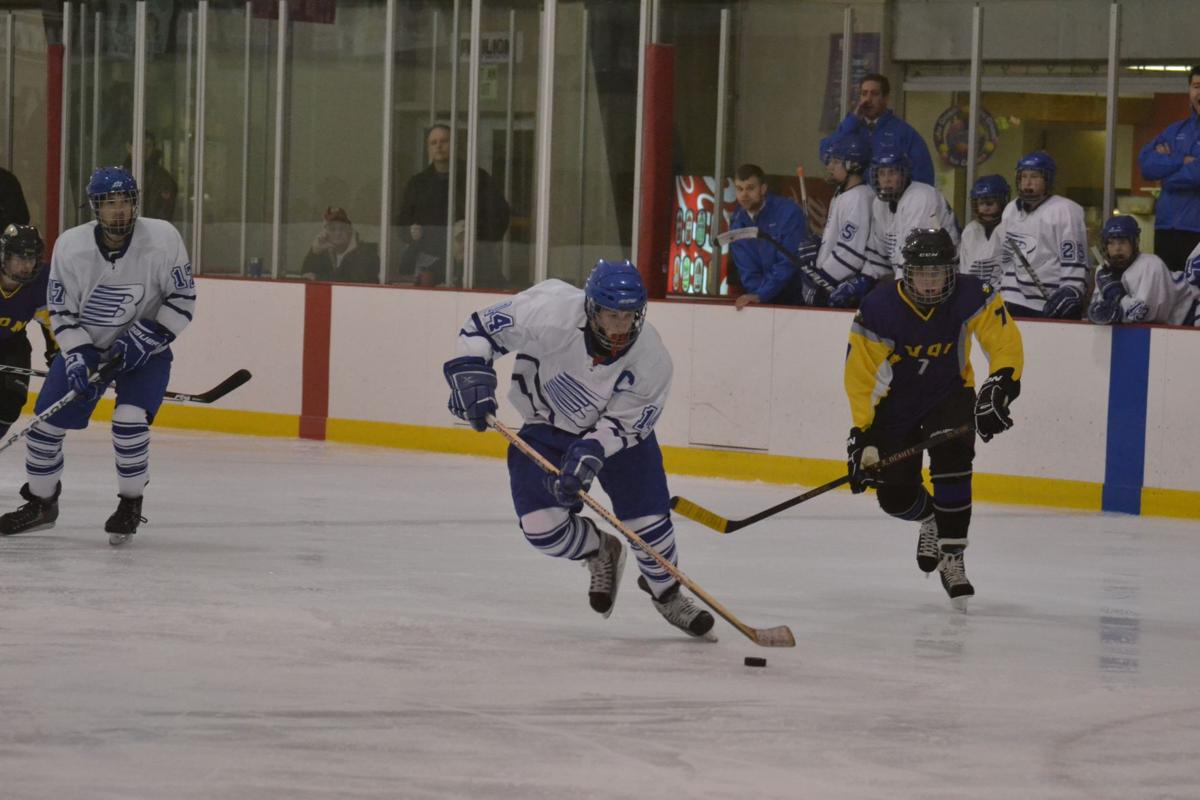 Both the Southwestern Conference and West Shore Conference hockey tournaments were held over the Martin Luther King, Jr. holiday weekend.

The SWC tournament was hosted by North Olmsted and was held at the North Olmsted Recreation Center. The participating schools were North Olmsted, Olmsted Falls, Avon Lake, Amherst, Brecksville and Westlake.

NORTH OLMSTED had a rough weekend as the host team of the tournament, losing to Amherst 8-1 and Westlake 2-0. The game against Brecksville was postponed due to poor ice conditions.

The loss to Westlake on Saturday afternoon was a bitter pill to swallow for Eagles head coach Tim Murphy.

“We had a lot of chances,” Murphy said. “We out-played them in every phase of the game except the final score.

“We couldn’t get one by (Westlake goaltender Matt Russell),” he added. “We had enough looks to do it, but he’s very good.”

The Eagles have been down on offense this season with Alex Arendec, their most prolific scorer, being injured for most of the year.

“We’ve struggled to score goals, especially with Arendec out,” Murphy said. “(He’s) one of our best players, if not our best player, and our top scorer coming back from last year. He’s missed most of the year and he’s still not back. It’s put pressure on other guys to score.”

Taking over the scoring duties have been seniors Tim Musat and Brandon Schmitt, and junior Michael Shackelton.

The WESTLAKE squad made the most of the weekend tournament, beating Avon Lake 2-0, Olmsted Falls 8-1 and North Olmsted 2-0. The shutout victory over Avon Lake on Saturday showed that the Demons are playing as a well-oiled machine.

“It was probably our most complete game this year,” said Westlake head coach John Duke. “We were moving the puck well. We were firing it on net and hitting some corners. It was a fun game.”

Westlake (19-4-3) is playing an independent schedule and has petitioned to join the Greater Cleveland High School Hockey League (GCHSHL) starting next year.

“Our petition is up for review next week,” Duke said. “We’ll find out if we are going to be in the league next year.

“Obviously, our record illustrates that we’ve played well,” he added. “We’re starting to get more consistent, and (we’re) playing each shift all-out for three periods.”

The Demons will face Amherst for the SWC tournament championship Thursday night.

OLMSTED FALLS has an extremely young team that is down in numbers this year, and it showed over the weekend with losses to Brecksville (9-1), Westlake (8-1) and Amherst (10-0).

“We are down a little bit right now,” said Bulldogs head coach Brian Thompson. “We’re very young and very inexperienced, especially in some key positions, but the kids are learning and we want to finish the season strong.

The Bulldogs (2-17-1, 1-5 in the Blue West division) are ready to go through the home stretch of the season.

“We’re looking forward to – and know what we have to do – to compete until the end of the year,” Thompson said. “We’re just looking to have some fun.”

This was the first year for the WSC tournament. It was hosted by Rocky River and was held at the Hamilton Ice Arena. The teams participating were Rocky River, Avon, Bay, Elyria Catholic, Lakewood and Midview.

“Our by-laws state that if there are five schools in our league that offer a sport, we have to have a conference championship,” said Rocky River Athletic Director Jeffrey Schultz. “With Avon adding hockey recently, it gave us enough team to be able to do it.

“It’s tough to run a tournament with only five teams, so with Lakewood coming in (to the WSC) next year, we invited them to play in it this year.”

ROCKY RIVER breezed through the tournament with victories over Lakewood (10-0), Elyria Catholic (9-1) and Avon (10-6). The ease of the Pirates’ victory over E.C. on Saturday was surprising since they have played in six games over the last three days.

“Obviously coming back from playing out at Walsh against Hudson (earlier on Saturday), we thought we were going to be a little ‘legless,’” said Pirates head coach Chris Cogan. “It was good to get ahead and get some of our other guys out there and try to give the first two lines some rest.”

Even with fewer rotations on the ice, the first line – including Rocky River sophomore forward Tyler Harkins who scored five points on four goals and an assist in the E.C. game – keeps on scoring.

“They (the first line) work really well together,” Cogan said. “It’s amazing how well they see the ice and see each other.”

The Pirates (20-4, 5-1 T-1st in the Red South division) went on to play a rematch against Elyria Catholic in the championship game on Monday.

BAY had a difficult weekend, losing games against Avon (4-3), Lakewood (3-2) and Elyria Catholic (11-0). The Rockets (4-15-1, 0-6 in the Blue Central division) were in control of the game against Avon Saturday morning, leading into the second intermission, but let the Eagles come back and beat them.

“We started the game with three defensemen and mid-way through the first period we lost one of them (to injury),” said Bay head coach Rick Kirk. “We had to run two defensemen and put a forward back there, and they got tired.

“What happens is that people are playing in different positions – and if they don’t communicate with each other, they end up in the wrong area – and we ran into a little bit of that.”

LAKEWOOD (8-7, 4-0 in the Blue Central division) will join the WSC next season.