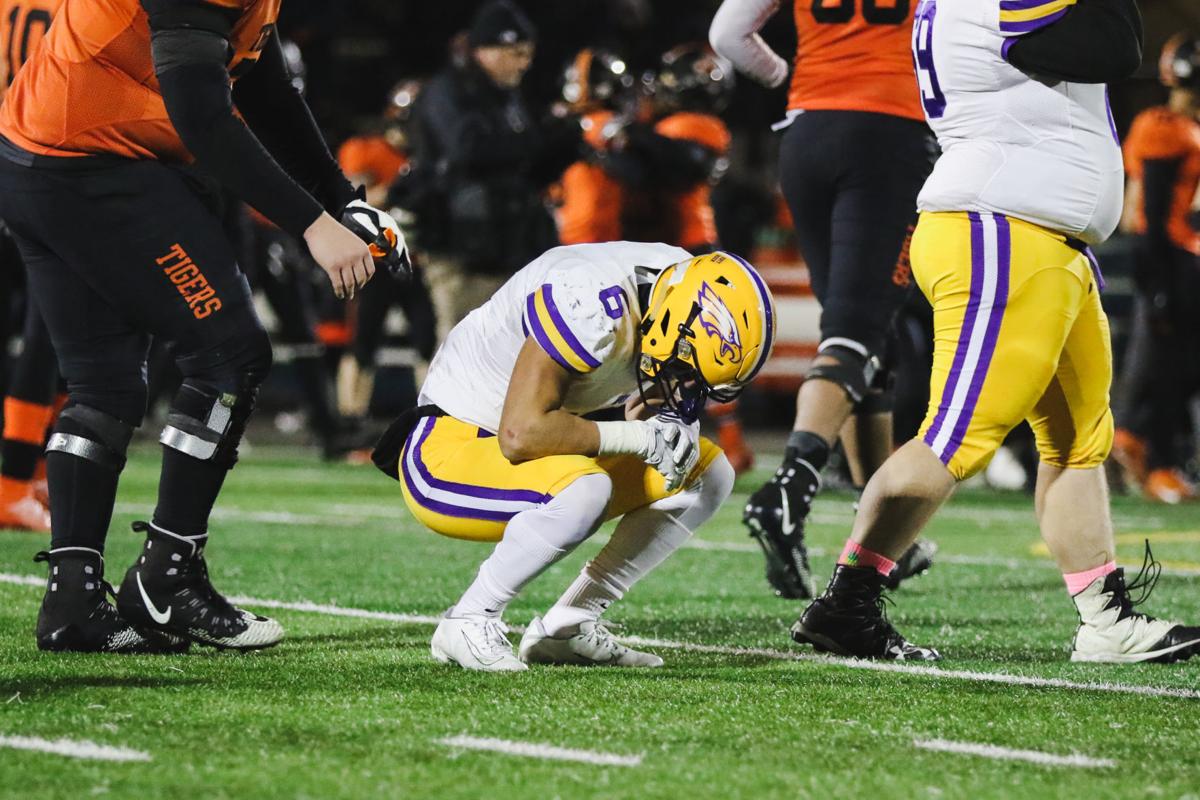 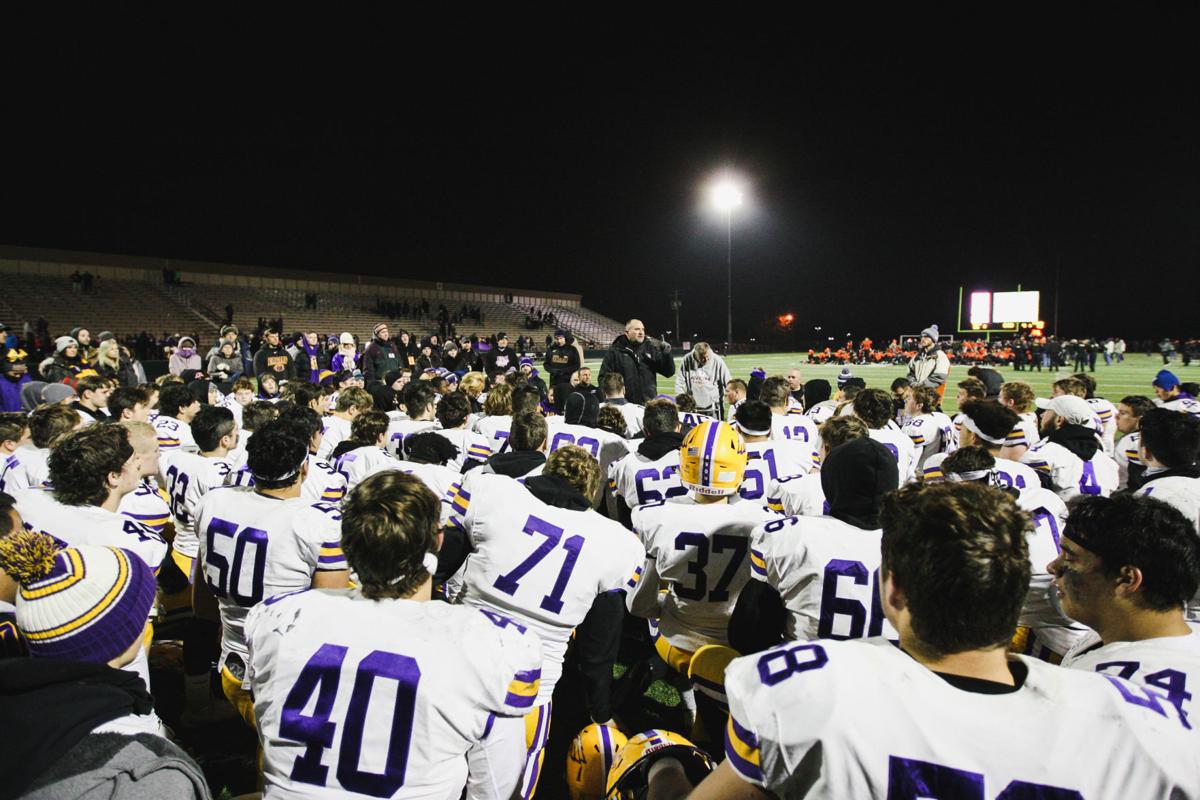 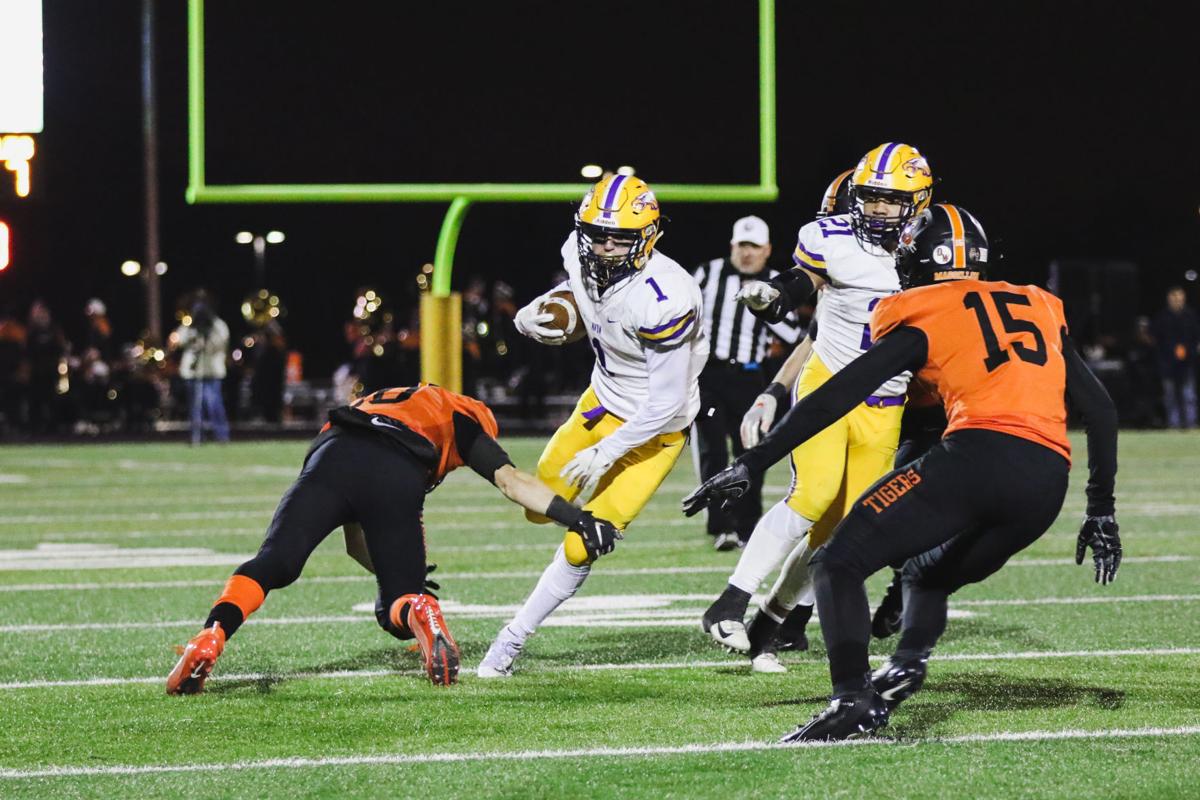 Avon's Joey Lance (1) runs between two Tigers defenders. As part of a tandem filling in for injured starting running back Nick Perusek, Lance ran for 608 yards and five touchdowns and had over 500 receiving yards and 10 touchdowns.

Avon's Joey Lance (1) runs between two Tigers defenders. As part of a tandem filling in for injured starting running back Nick Perusek, Lance ran for 608 yards and five touchdowns and had over 500 receiving yards and 10 touchdowns.

But pride wasn’t enough as the high-powered Massillon Washington Tigers (14-0) rumbled to a 35-10 victory over the Avon Eagles in the Division II state semifinal game at Parma’s Byers Field.

On the strength of senior running back Zion Phifer’s 165-yard, four-touchdown performance, the Tigers defeated the injury-ravaged Eagles. Massillon will face Cincinnati LaSalle (12-2) this weekend for the state title at Tom Benson Hall of Fame Stadium in Canton.

Avon lost 22 players during the season, including injuries suffered by 10 starters, with 13 season-ending injuries.

The Eagles finished the season 13-1 and were the Southwestern Conference and Region 6 champions despite the upheaval.

“I’m proud of our kids,” Eagles coach Mike Elder said. “They battled through a lot of things for us. For this team to be in the state final four is kind of incredible, specifically with all the things we dealt with.”

Eagles senior lineman Joe Svec knew his team did all it could.

“Everyone stepped up,” he said. “I have tremendous respect for everyone on this team. It’s my team and I’m proud of who we are and what we accomplished this season, and we couldn’t do it without the coaching staff.

“Coach Elder’s a hell of a dude,” Svec added. “He knows how to run a program. It’s implanted in us that it’s a next man up mentality. You give it a full effort and play as if it’s your last play. He gets everybody to play that way, and it’s hard to stop.”

Svec, the team’s starting left tackle, was also one of those players on the injury report the past several weeks, but played Friday night. A stress fracture in his leg forced the coaching staff to move Chris Pepe, usually a defensive end, over to his spot until Friday.

Lance finished with 187 rushing yards on 34 carries. His 3-yard touchdown run with 35 seconds left in the first quarter tied the game at 7-7. He caught a Myers pass in the fourth quarter for seven yards, and helped set up a reverse pass late in the third quarter when Michael Matlak threw to Tommy Purcell for a 34-yard gain.

Rarely taking a play off, Lance also continued to line up in the defensive backfield.

“He’ll never quit,” Svec said. “He’s such a great athlete with such a great heart. He’ll do anything for the team, and we asked him to do a lot.”

Avon’s only other score came on a 23-yard Nate Vakos field goal just before halftime to cut the Tiger’s lead to 21-10.

Hunter finished with 66 yards on 21 carries.

“It didn’t end like we wanted it to, but overall I thought it was a great season,” Hunter said.

The Tigers will have the opportunity to win their first state title since the Ohio High School Athletic Association introduced the current playoff format in 1972. Thanks to four touchdowns in their first five drives — Phifer runs of 13, 9, 4 and 25 yards, respectively—the Tigers took a 7-0 lead, then increased it to 28-10 with 2:04 left in the third quarter.

With 7:06 left in the game, Raekown Venson (six carries, 42 yards), bullied in for a 1-yard touchdown to increase to 35-10, sending one half of the stadium’s seating into loud celebration.

The Eagles forced three Tiger punts in the second half and held prolific quarterback Aidan Longwell — who had passed for nearly 3,000 yards on the season — to just 129 in the game. The Eagles put together a pair of long drives but turned over the ball on downs.

“No one said we were going to be here, and we’re here, and that’s pretty much all that matters,” Lance said. “We were counted out since day one, we had injuries, we had let-backs, but this team came together and it’s unbelievable what we accomplished.”